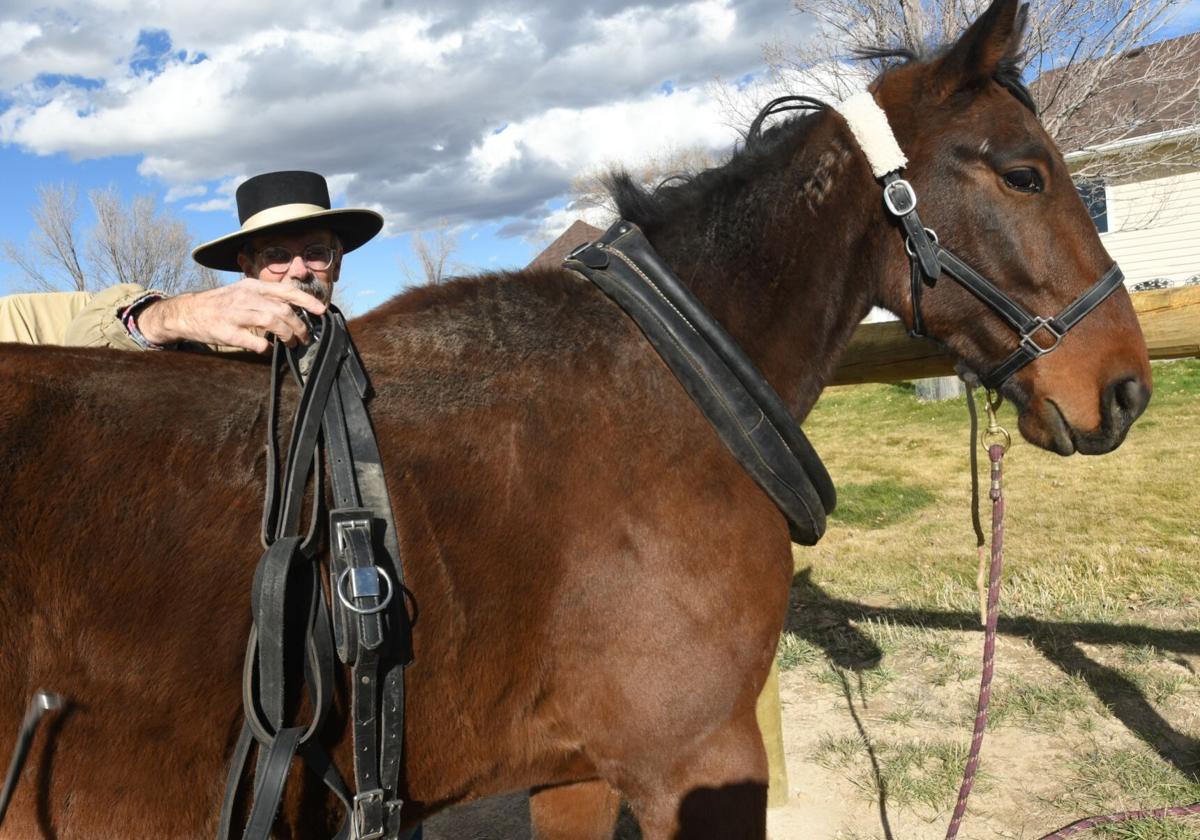 Andy Boyer harnesses one of his geldings for a carriage ride. 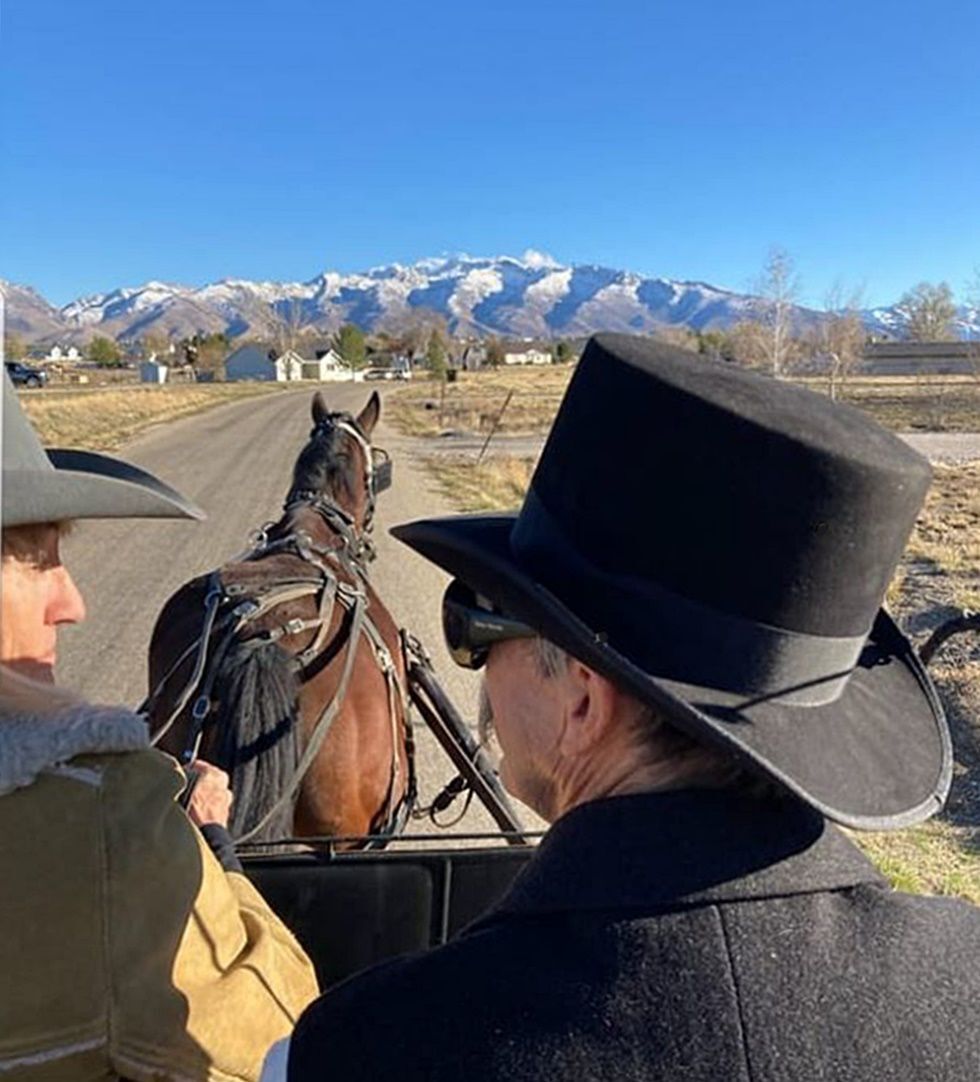 Andy Boyer teaches a client how to drive a horse-drawn carriage. 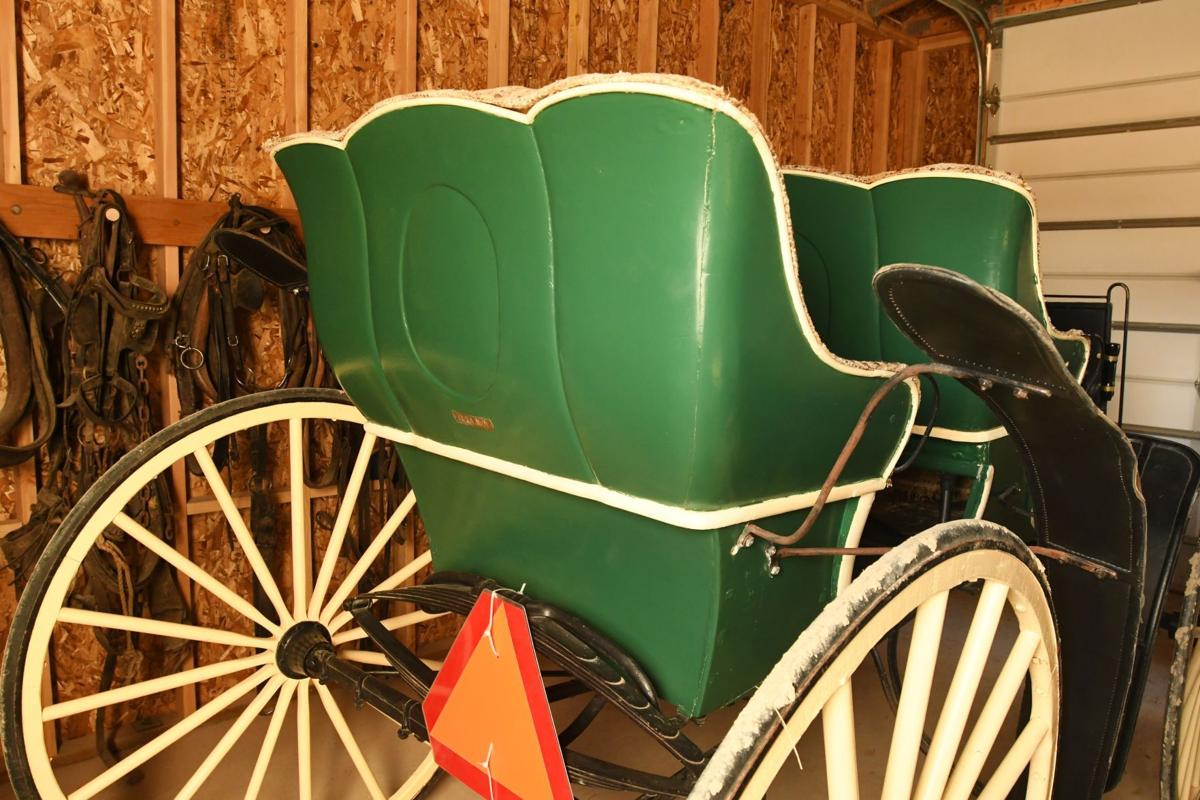 The Boyers use a restored carriage painted a cheerful green. It has a "slow moving vehicle" symbol on back.

SPRING CREEK – Riding in a horse-drawn carriage is a step back in time to when life moved at a slower pace. You see things along the roadway when traveling the old-fashioned way that you might not see hurtling down the freeway in your SUV.

Andy Boyer has always loved horses and the traditional way of life. He was raised on a farm. His father was born on the land and originally used horses to farm. He does rawhide braiding, tans buffalo and deer hides and has volunteered endless hours at the Western Folklife Center, a place where horsemanship, ranching and the Western lifestyle are honored and celebrated.

Andy is involved in the yearly Pony Express Reenactment. He is in charge of a section near Eureka. He was also part of the Cowboy Express Grass March organized by Grant Gerber.

“When we lived in California there was a guy in the area that did a carriage business for hire,” said Boyer. “I wanted to learn to drive so I contacted him and we made a deal that I would clean harness in exchange for lessons.”

Boyer and his wife, Jan, retired to Spring Creek a number of years ago. They eventually partnered with another man on a couple of saddle horses.

“He got the itch to get some harness horses because he knew I drove and he has a couple wagons. Through my connection, I got hold of a guy back East and he bought these (harness) horses for us.”

Andy traveled back to Illinois to try them out. He loved the two standard bred geldings and purchased them.

“They’re so desirable because they are already harness broke and have good personalities, gentle,” Andy said. “There are only about three percent bred that make it to the track. The Amish buy most of the others. The guy I used as a trader was Amish.”

Andy pays extreme attention to safety at all times. He was trained to always check over the harness and keep an eye on his horses’ behavior.

“The best thing you can do is pay attention, you have to be constantly aware of what the horse can see and what he might be afraid of.”

The Boyer horses are named Castor and Pollux, named after figures in Greek and Roman mythology. Legend has it that they were twins with separate fathers. Zeus or Jupiter was the ethereal father of Pollux, while Castor had a mortal father, King Tyndaru, a Spartan king. One was considered semi-divine, while the other was thought to be mortal. In a clash with rivals Castor lost his life.

Pollux asked Zeus to let him share some of his immortality with his twin in order for them to remain together for eternity. Magically, they were transformed into the constellation Gemini, still seen in the darkened sky. They were known as protectors of sailors and represented horsemanship.

Like the mythological brothers, Andy’s horses are also half-brothers. One has a white patch on his left rear hock, while the other as a similar patch on his right rear hock. Otherwise, they are very similar in coloring and build.

Andy and Jan have now developed a business involving their restored carriage and their two gelding harness horses.

They have provided their services during weddings and date nights and made a show with passenger rides at the Lamoille Pumpkin Festival. They are also involved with the Seventh Canyon Ranch offering wedding rides.

A carriage ride with Andy, Pollux and Castor is more than just a “walk in the park.” Andy goes all out and dresses to the occasion. He even had a local hatter create a specialized top hat just for driving. His handlebar mustache finishes off the look.

“We’ve had people stop the carriage on the street and say, ‘This is so great, I want to do this for my engagement,” said Jan.

ELKO — Three new saddle commissions have been delivered to the Western Folklife Center for their permanent collection.

The Best of Cowboy Poetry

Check out our online special edition at elkodaily.com

Izzy, the couples rescue dog, is delighted with the new business venture.

Andy Boyer harnesses one of his geldings for a carriage ride.

Andy Boyer teaches a client how to drive a horse-drawn carriage.

The Boyers use a restored carriage painted a cheerful green. It has a "slow moving vehicle" symbol on back.