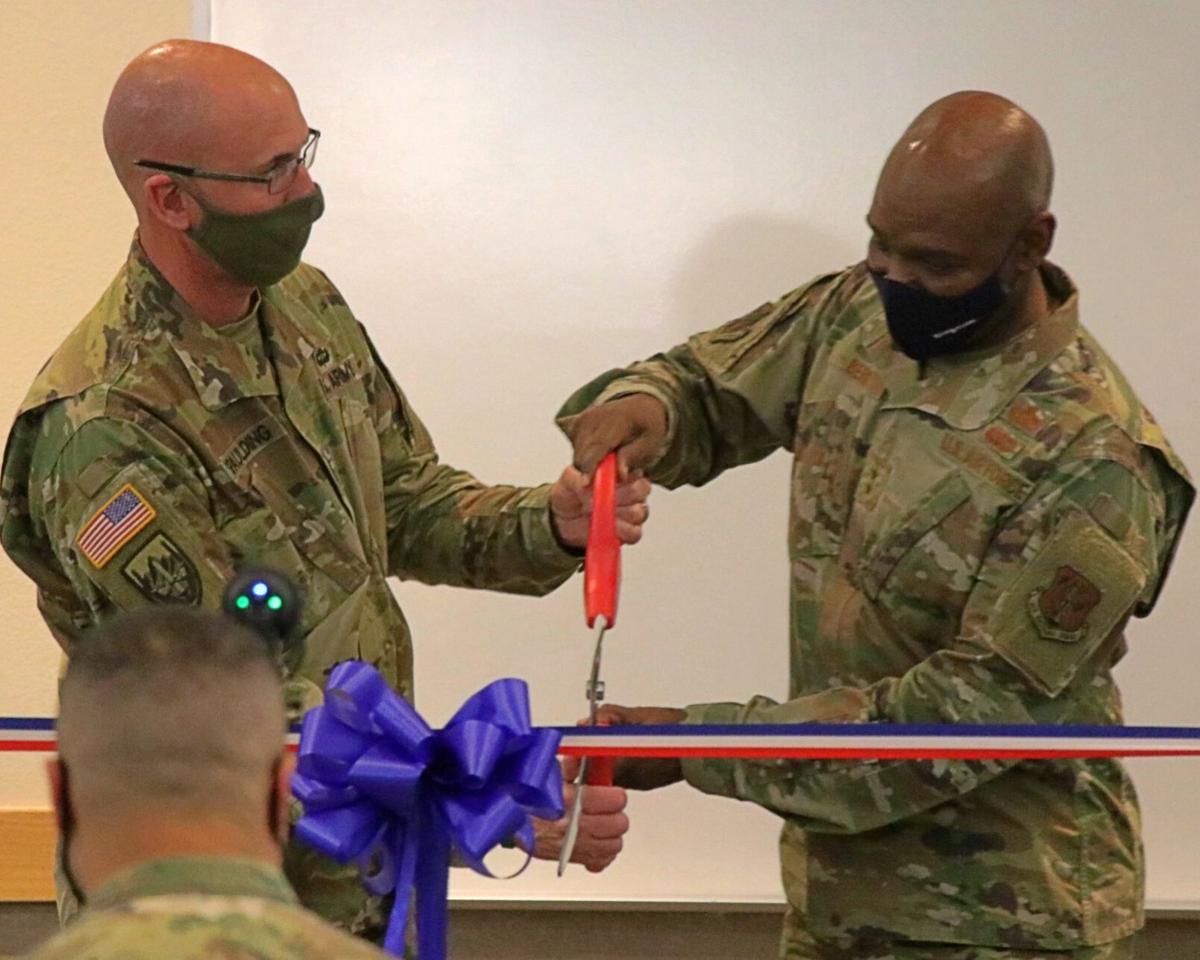 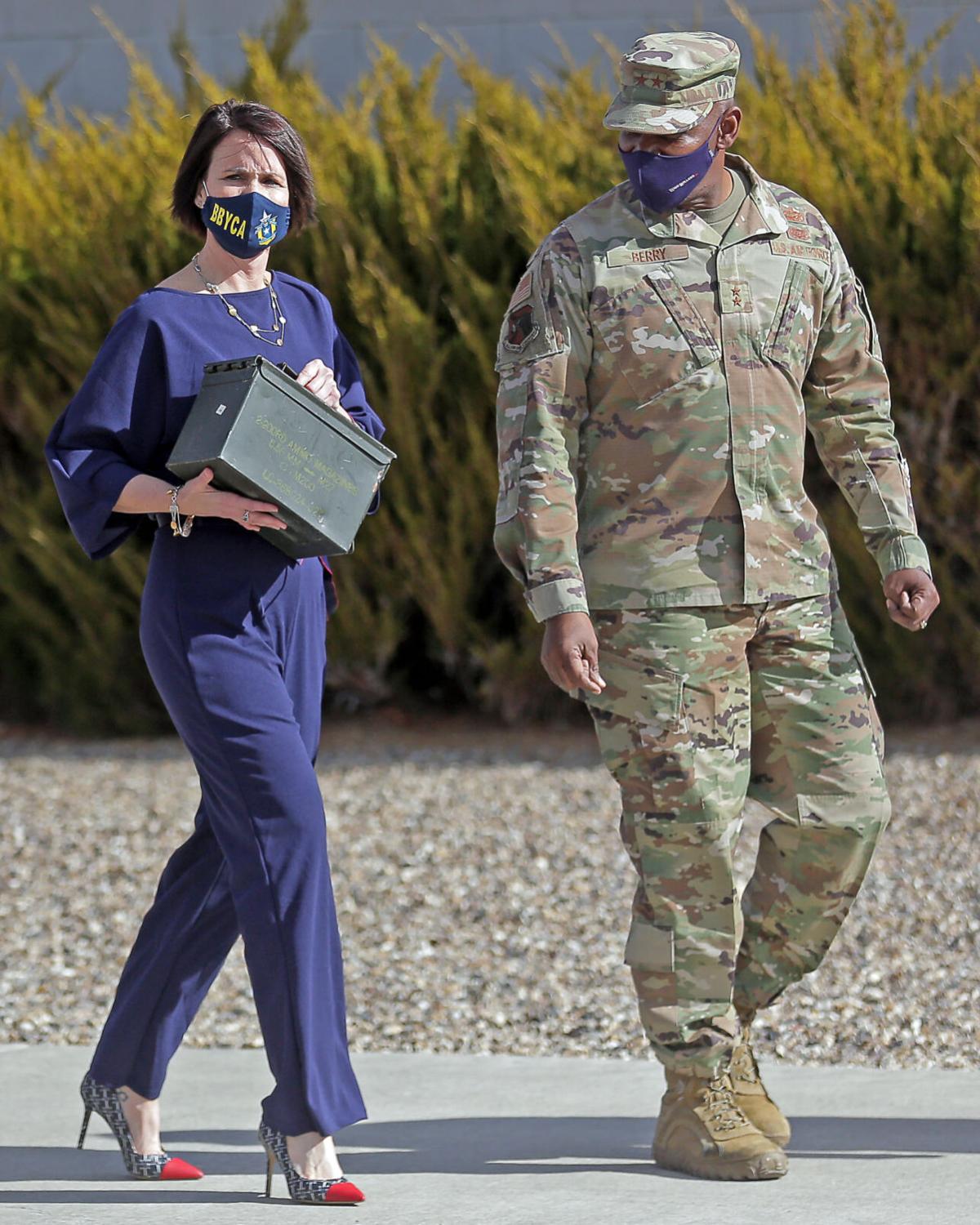 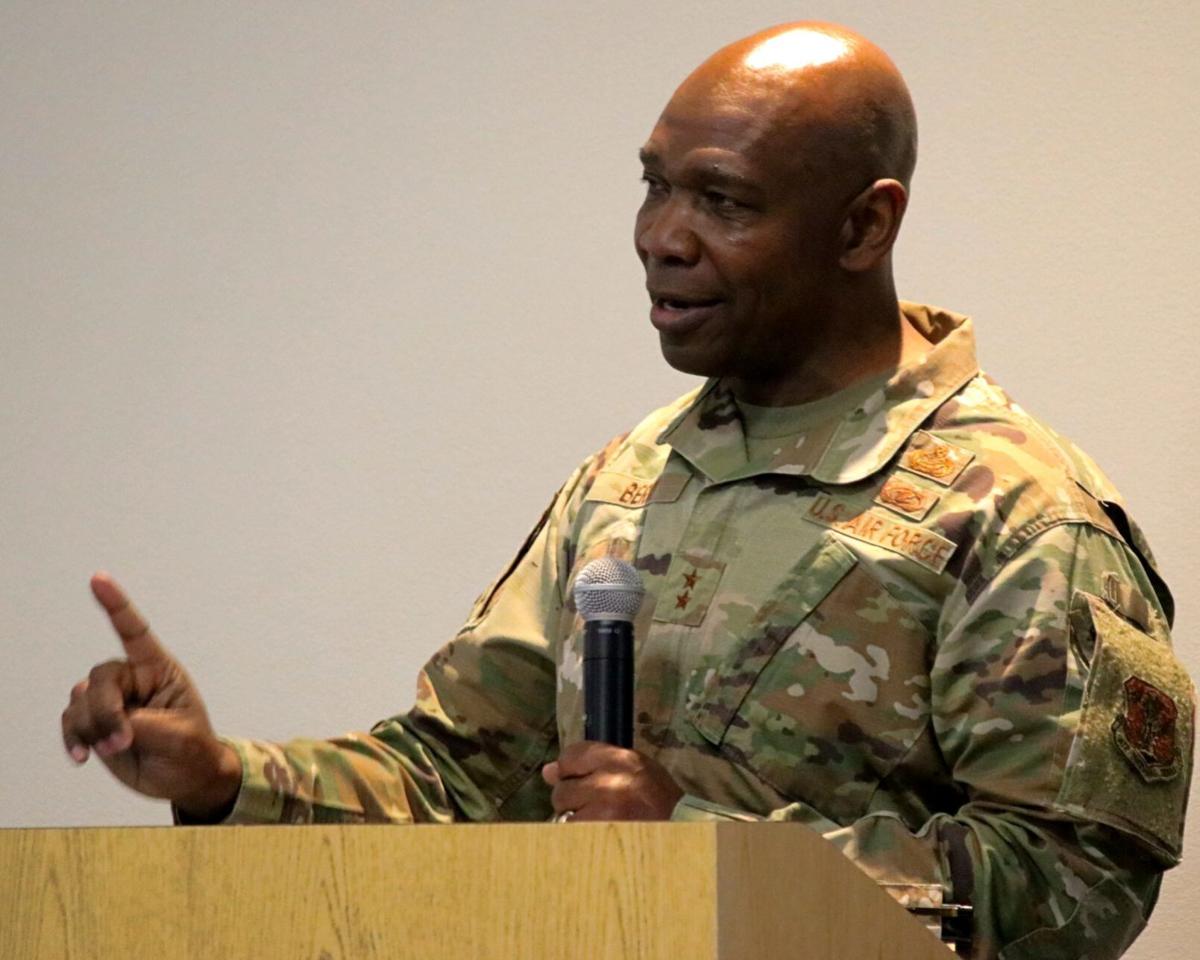 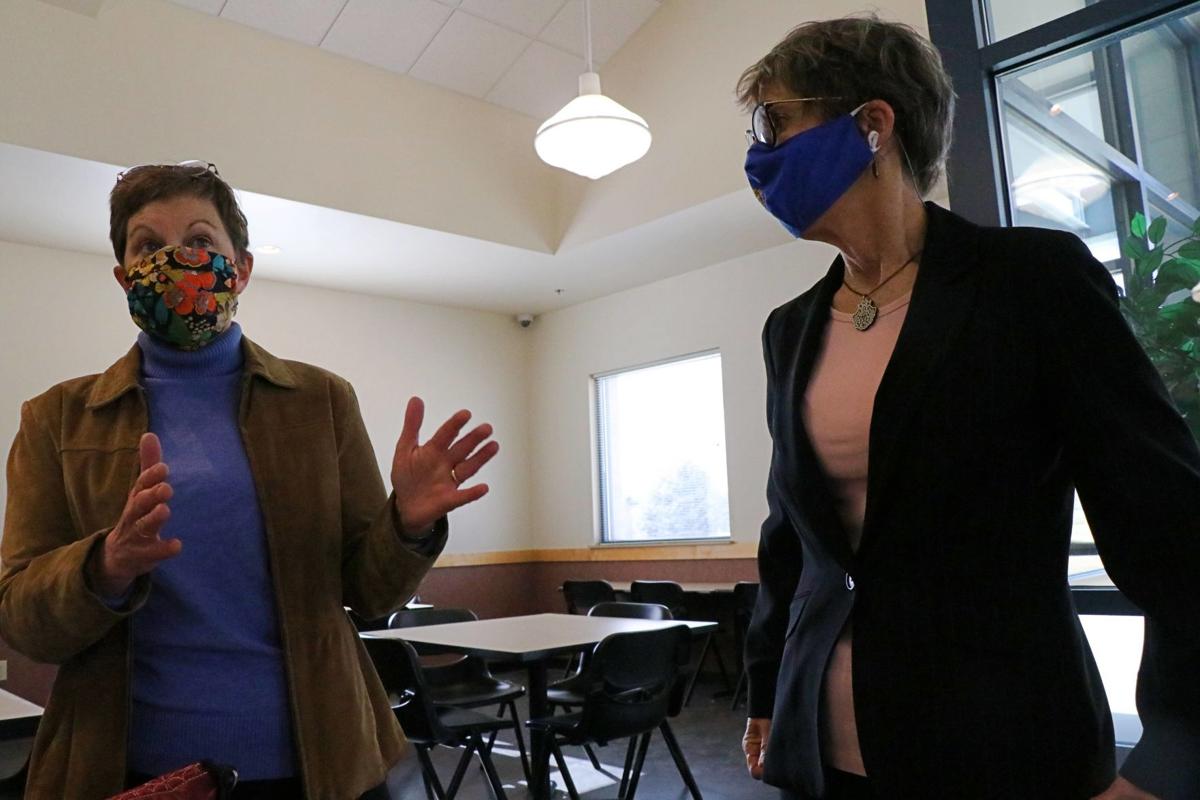 Heather Goulding, left, and Grace Nichols, nicknamed the Tsunami Sisters, discuss their involvement in funding the Battle Born Youth Academy through the Nevada Legislature. They were pictured inside the Food Service Bulding at the Elko County Readiness Center on Feb. 10.

About a hundred people were on hand to watch the official opening of the Youth Challenge program at the Elko County Readiness Center Wednesday morning, led by Academy staff and National Guard officers.

The program is aimed at serving at-risk 16- to 18-year-old coeds statewide to obtain high school credits in a paramilitary setting. It also provides a year-long mentorship once the student successfully completes the 22-week program.

“This is a defining moment for our state in terms of what we are able to bring for our citizens and our young people,” said Nevada Guard Adjutant General Major General Ondra Berry. “It will elevate who we are because anything that you do for young people pays itself over time and time again.”

The Academy received state funding from the 2019 Legislature, providing $500,000 annually along with $1.5 million in anticipated federal funds.

The money was used to renovate the Readiness Center, purchased by former Nevada National Guard Adjutant General Brigadier General William Burks with the intention of starting a Youth Challenge Program in Nevada.

The property was originally the home of University of Nevada, Reno’s Fire Science Academy from 1999 until 2008 when millions of dollars in debt forced its closure by the Board of Regents.

Classrooms and offices are located in Berry Hall; Burks and Castagnola serves as living quarters for the students.

Now retired, Burks serves on the Youth Challenge program board of directors. He told the audience of his desire to establish a program in the state instead of sending students to Arizona and California.

“We could never find a facility,” Burks said. Before he retired, the National Guard purchased the fire science academy property.

“So here we are today to cut the ribbon. I’ve got to be honest with you, without the Tsunami Sisters over here, Heather and Grace, it would not have happened. They were giants. They rolled over the Legislature and that’s why they are called the Tsunami Sisters,” Burks said.

Heather Goulding and Grace Nichols of Reno received rounds of applause from numerous presenters during the ceremony for bringing the program to the attention of the lawmakers in 2019.

For Nichols, the project began about three years ago when her son attended a Youth Challenge program in Oregon. Wanting to see a program created in Nevada, she approached Burks with her thoughts during a pancake breakfast.

Currently, there are 38 other states that run Challenge programs thought the National Guard.

Goulding joined Nichols, quitting her full-time job to learn about the legislative process. Meeting with 63 lawmakers and high-ranking officials in government and education, the duo formed a collation.

“Our work is the legislative side,” Nichols said. “This thing didn’t exist, so we had to find out how laws get made. We actually changed the law in the state of Nevada and we changed the state budget.”

They appealed to lawmakers in the Assembly, explaining the need for teens to live up to their potential as well as the Legislature’s “straight fiscal responsibility,” Goulding said.

Eventually, the measure passed unanimously in both the Assembly and State Senate during the 2019 session.

“We eventually fought and got them all to vote,” Goulding recalled, noting it was a bipartisan victory.

Looking for a change

Designed for at-risk 16- to 18-year-olds, the Battle Born Youth Academy will open its doors to its first group of 150 students on July 18.

The program is voluntary and open to students throughout the state who are seeking a change in their lives and intend to take it seriously, said Lisa Williams, program coordinator.

“They can apply or recommend, but either way, we expect a great deal of buy-in from them from the get-go,” she explained.

Applicants are required to fill out an extensive form and obtain a physical. They must also find a mentor within their community, or ask the academy to place them with a mentor if they are new to the area. They are also interviewed “to make sure they are a good fit” for the program.

“They know they need to do something differently, they might not know how or what, or possibly their family lacks resources to help them out, but those are the students we are here for, and those students that really want to get back on track with their lives.”

During the 22-week course, students will be offered a chance to catch up on high school credits, working at their own pace.

“They will earn every credit that they get,” Williams said. “Nothing is given to them.”

Some cadets may receive enough credits to graduate at home, while some may earn enough to receive a diploma from the Elko County School District, she added.

Eighteen-year-old “freshmen” cadets accepted into the program will study for the HiSet, a high school equivalency exam.

The program is “very different depending on the student’s needs,” Williams noted.

Educational staff is provided to the Battle Born Youth Academy through a partnership with the Elko County School District. A principal, administrative assistant, special education teacher, school counselor, four teachers and three paraprofessionals will serve at the Academy.

McAnany, a 24-year educator with the school district, said it was “exciting” to be part of a project that is starting from the ground up.

“For me, I’ve been at tons of different schools in the county. I’ve taught from first grade to high school. I taught it all, but it’s a good opportunity,” he said.

The pandemic delayed the Academy’s opening for about a year. McAnany recalled being hired as principal a year ago and was preparing to announce job openings when schools were closed on March 15 by Gov. Steve Sisolak.

Executive director Lauren Schulman arrived in January 2020, with Williams following in April. For a while, they were only two employees at the academy due to a statewide hiring freeze. Now the Academy has 10 employees out of the 50 that they need to fully operate.

Next week, McAnany begins to hire staff to run the school within the Academy.

Williams said hiring will begin soon for their operations. Although the pay cannot compete with the mines, “the benefits are fantastic.”

“The biggest benefit is graduation day when you see students walk across the stage in a graduation ceremony,” she said. “Whether they get a diploma, a GED, or not, that is irrelevant. If they finish the program they will graduate from the program.”

The “biggest factor” in the Challenge program is that disciplinary issues will be handled by the National Guard, Williams added. “There’s a lot less time lost to classroom discipline.”

“It will be like any other normal high school in the state with seven classes,” McAnany said.

After the 22 weeks has been completed, students return home and work with a case manager and mentor to research and explore job opportunities for a year.

“It’s that 12-month post-residential that sets us apart from most alternative schools,” Williams said. “They will earn credits in the classroom, their uniforms and phone calls on the weekends.”

“It sets them up for changing the entire trajectory of their life, not just right now, but the way they parent, the way they raise their children and their job.”

Below is a gallery of photographs from the ribbon cutting ceremony for the Battle Born Youth Academy located at the National Guard and Elko County Readiness Center on Feb. 10.

ELKO – Almost a year after the state shuttered classrooms due to the pandemic, all schools throughout the Elko County School District could re…

Heather Goulding, left, and Grace Nichols, nicknamed the Tsunami Sisters, discuss their involvement in funding the Battle Born Youth Academy through the Nevada Legislature. They were pictured inside the Food Service Bulding at the Elko County Readiness Center on Feb. 10.