Michelle Gonzalez, the mother of a transgender student, speaks to the Elko County School Board Tuesday. 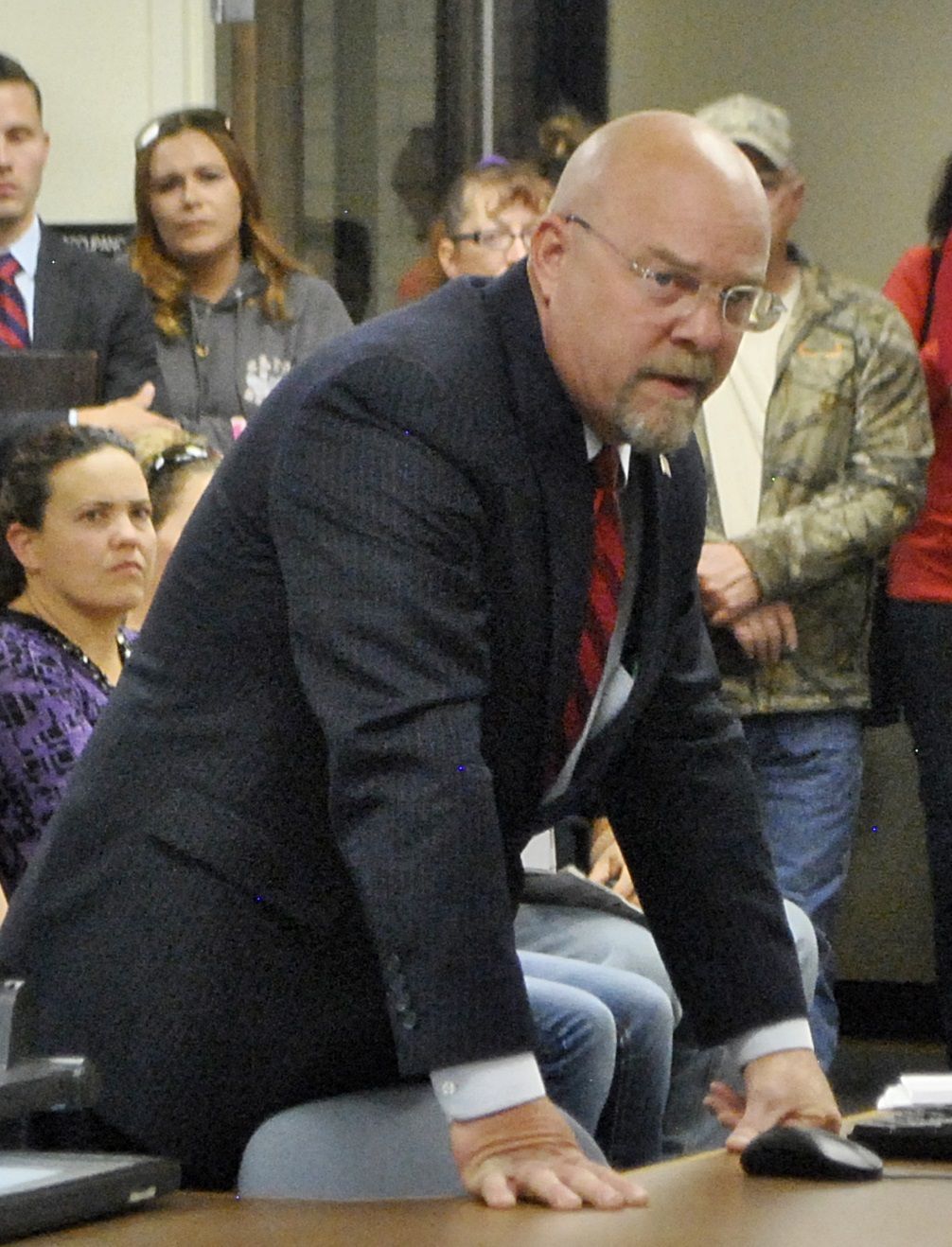 Assemblyman Ira Hansen, R-Sparks, speaks to the board.

ELKO – It was standing-room only while residents and public officials debated whether to allow a transgender middle school student to use the restrooms and locker room with which he identifies.

The request was unanimously denied.

The crowd consisted of people for and against the issue Tuesday during the Elko County School District board meeting.

The discussion of the agenda item started with a statement by Michelle Gonzalez — the parent of the 13-year-old transgender boy.

She spoke about her son’s situation, and his feelings of discomfort while using the girls’ facilities.

“You are responsible as educators and school board members to make the decision that is best for all students,” she said to the board in her appeal for her son. “My son has the right to live his life as a boy.”

Gonzalez said her son is bullied every day, and the fact he has to use the special education unisex restroom – which was the exception the board made specifically for her transgendered child — instead of the boys’ restroom, is proof that the standards are promoting to “segregate diversity.”

She asked the school board to “educate” themselves, and allow her son the use of the boys’ facilities.

Soon following Gonzalez’s plea, Assemblyman Ira Hansen, R-Sparks, stepped up to the microphone to educate the school board about Senate Bill 504 – which opened the door to allow the transgender individuals to make this request due to the new standards set up for bullying – and how the bill came to pass, despite his firm opposition.

“The bill had not been fully vetted,” he said. “The legislature said the bill was a fiscal issue.”

Assemblyman Jim Wheeler – who voted in favor of the bill – said the reason he voted for the bill was because of his trust in the bill’s chairman, and the idea that “children should not be bullied.”

“Had I known the provisions for (the bill), I would never have voted for it,” he said. “The reason is because the use of the separate restrooms is not a physical issue. It has to do with the law.”

District practices have required children to use the facilities in the restroom or locker room that agrees with the child’s biology.

Following the statement by Hansen and Wheeler, several parents made claims of their worries of what “kind of trouble” having a transgender child in his or her identifying facility might cause.

The parents brought up ideas ranging from a child’s discomfort to the potential for the transgendered individual being harmed further or raped.

“My sons shouldn’t have to go through the pressures of having to use an enclosed stall instead of the urinal,” said mother-of-two Larin Campbell.

Catherine Borg is a mother of a Spring Creek Middle School student suffering from autism. She said when her son found out about the possibility of a transgendered boy using the same restroom he does, he stopped going to the bathroom altogether.

“My son has a disability, and he gets no special treatment,” she said. “I teach love and acceptance to him because he’s different, but it’s not all about one child. It is about what is best for all the kids.”

Assemblyman John Ellison agreed that there shouldn’t be an exception made for the minority of the students. Instead, standards should be set to support the masses.

“We should consider the privacy of all 9,526 students, not just the four transgender ones,” he said.

The three individuals separately stepped up to the microphone and pointed out the most exposure the children would face is the sight of the other’s underwear.

“He doesn’t feel female,” said Lyon. “If we don’t allow this, we could push back 20 years of progress.”

Elko School Board Trustee Cindy Elquist said her decision to vote against the request was based on the school board’s mission statement.

“We have to provide protection for all students,” she said. “We make policies that are best for all students according to our mission statement. Agreeing with the request would go against that.”

The board’s president, Thad Ballard, said the board is willing to accept reasonable requests for certain circumstances – naming special education, special meal plans and transportation as examples — but this request wasn’t one of them.

“The school board made reasonable accommodations for the student,” said Ballard. “The law doesn’t go that far to designate the student can use the restroom of the gender they identify with.”

ACLU asks for transgender decision to be reversed

ELKO – In a move many state leaders consider as the Obama administration forcing a liberal agenda concerning transgender rights, the Elko Coun…

Michelle Gonzalez, the mother of a transgender student, speaks to the Elko County School Board Tuesday.

Assemblyman Ira Hansen, R-Sparks, speaks to the board.