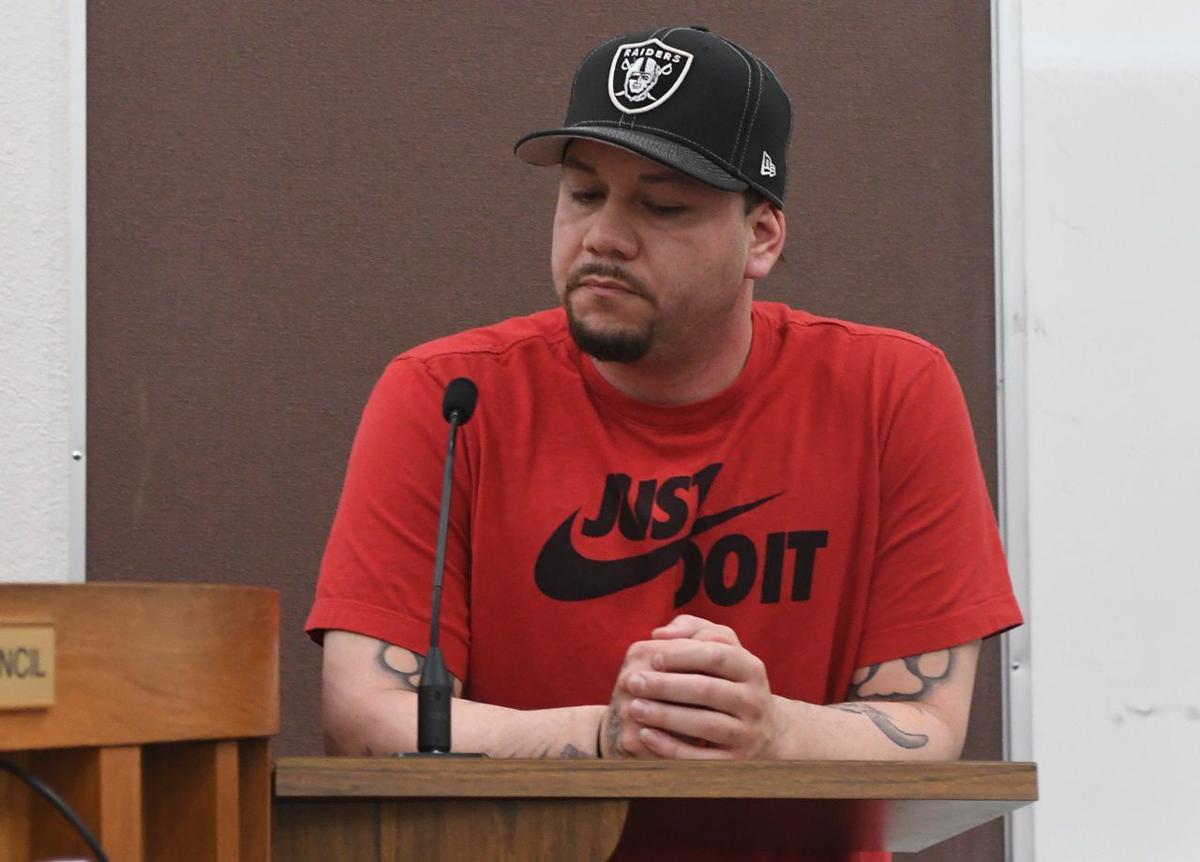 Elko Indian Colony resident Juan Arevalo spoke to Elko City Council members Tuesday about the plan to open a marijuana dispensary on the colony. Arevalo is vice chairman of the Elko Band and Te-Moak Tribe, but said he was speaking as an individual. 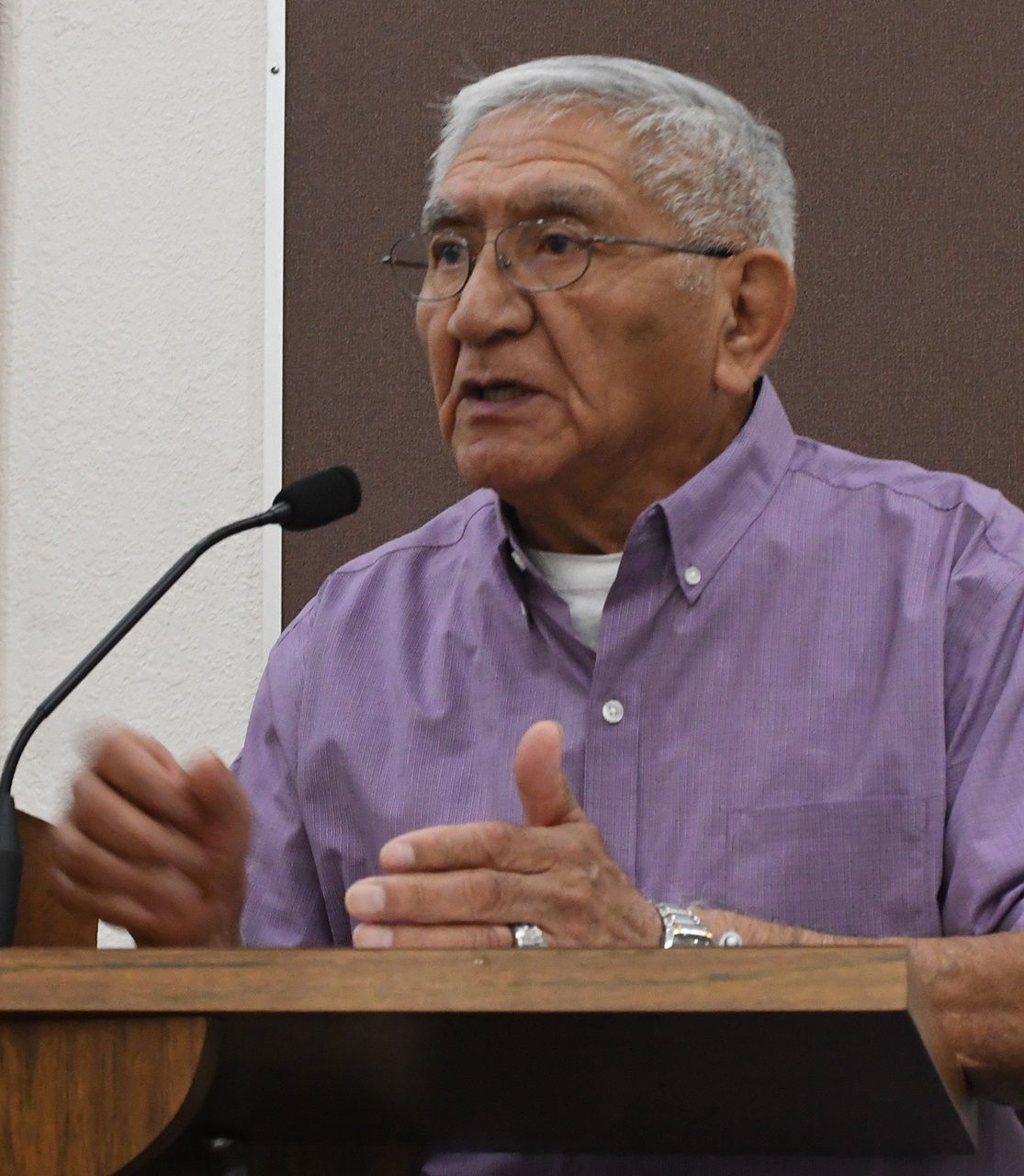 Former Elko Band Council and Te-Moak Tribe chairman Felix Ike spoke to Elko City Council in February about the plan to open a marijuana dispensary on the colony.

ELKO – Elko City Council members did not hear a presentation Tuesday on the Elko Indian Colony’s plan to open a marijuana dispensary, but they did hear opposing views on the subject from two members of the tribe.

Juan Arevalo told the council he was vice chairman of the Elko Band and the Te-Moak Tribe, but he was speaking as an individual.

“What’s the delay or the dilemma between the city council and the tribe’s venture?” he asked.

Mayor Reece Keener explained that after the state legalized marijuana in 2017, the City of Elko passed an ordinance banning marijuana sales in the city limits, and the county did the same for unincorporated parts of the county.

“Here in the Elko community, because of the mining sector, and because of kids, you know I’ve always said, ‘How can you tell kids with a straight face that drugs are bad, and allow a marijuana supermarket right in your own city,’” Keener said.

“And so it’s coming back to visit us again, in a means that is very uninvited. We found out about this just very recently and the whole thing has really been cloaked in secrecy,” he added.

Arevalo said the colony has limited opportunities for enterprise, and a cannabis facility was seen as the best option for sustainability.

“Coming from a tribal membership, sustainability is one of the factors that really determine our outcome, so any kind of venture or any kind of opportunity we seek would be beneficial to us as our own segregated community. We would venture into it,” he said.

“I was always told that people on certain areas of the reservation aren’t allowed to vote,” Arevalo said. “If they’re not allowed to vote then why does the City of Elko have any intentions to tell them what they can or cannot do …?”

“It seems like the city council wants to dictate to the tribe what they want to do,” he continued. “It’s off-putting to me and I’m really not seeing where everyone’s coming from.”

Arevalo said he wanted to start a relationship with the city, after growing up and seeing the city and tribe “butting heads all the time.” That’s why he ran for the Band Council.

“I take this very seriously and want to at least start some kind of new approach,” he said.

Earlier in the meeting, Keener explained that Elko Band Council Chairman Davis Gonzales had requested to be on Tuesday’s agenda to make a presentation to the council but then sent the city an email saying he would not show up.

Former Elko Band and Te-Moak Tribe chairman Felix Ike then told the council that they were not alone.

“You are in the same situation that the community of Elko Band is in,” he said. “They refuse to give the information that you are seeking … and we have a lot of questions too.”

“We don’t get to review any of the documents,” Ike said. “We don’t get to sit in on their closed, special meetings, and we don’t have the privilege of looking at the contract that they have signed with the company – we don’t even know the name of the company. We don’t have the opportunity to review what he [Gonzales] had signed with the governor.”

Ike said he decided to come to the city’s meeting after reading about the plan Tuesday on elkodaily.com. The article mentioned that the Band Council held a job fair on Saturday, looking for people qualified to fill several positions needed to cultivate, process and sell marijuana.

“We are very concerned with how this whole thing came about, and we are looking at some of the deficiencies in regards to what the Band Council has done,” Ike said. “And really, this is not a Band Council issue, it is a tribal issue. Te-Moak is the tribe, Elko is the band.”

The Elko Band’s reservation lies mostly along the northern edge of the city, and some of the streets leading into it are not marked with signs to indicate one is entering tribal land.

“We respect the neighbors around our community,” Ike said. “We have the golf course, neighbors on Skyline Drive, we have a day care center that’s within a hundred feet of their proposed dispensary … and we have asked the intertribal council of Nevada, what is the standard in regards to having a dispensary that close to one of our facilities?”

“We almost have zero law enforcement,” Ike continued. “We are now under the Bureau of Indian Affairs and they are limited in regards to their personnel resources. We have to call 911 in Duck Valley – that’s a hundred miles to the north – and sometimes it takes a long time for them to respond.”

Ike said communication with the city should have taken place before the Band Council decided to proceed with setting up a dispensary. He said he was told the tribe does not need to follow Nevada Revised Statutes on dispensaries because they are on sovereign land. Instead, the tribe can create its own laws.

The Elko Daily Free Press, however, obtained a copy of the agreement signed by Gonzales and Gov. Steve Sisolak on Jan. 23, and it states that the tribal government’s laws relating to cannabis will be “at least as restrictive” as state regulations. If not, the state may terminate the agreement with 60 days’ notice.

Ike said he understood that a company out of Las Vegas plans to set up the dispensary, but the company has never made a presentation to tribal membership, only to the Band Council in secret meetings.

“I’m sure the council here would not leave the public out of any contract they are going to have,” he said.

“We have a big, big issue” among the tribal members, he said. “They were promised by the company and by the Band Council and by the leadership millions of dollars. That is the driving force here.”

Ike told the City Council that the Band Council had conducted a vote on marijuana separate from the tribe’s other bands. The ballot asked about support for medicinal marijuana, recreational or both, and medicinal-only received the most votes.

“Mr. Ike, is it fair to say that this issue has really split the tribe?” asked the mayor.

“I don’t think the state really understood our tribal structure” when signing the agreement, Ike said. He urged city to contact the state with its concerns.

“It’s happening right next door to you guys.”

“Mr. Ike, thank you very much for taking a principled stand,” said Keener. “I know that it’s tough to speak out.”

Arevalo also mentioned the Elko Daily article when he addressed the council.

“I was very upset with the way they portrayed the tribe,” he said.

Arevalo said he objected to the term “pot shop” that was used on the story’s headline at elkodaily.com.

He said the operation is called “Newe Cannabis” and calling it a pot shop is disrespectful.

“I think it was racism the way they portrayed it, and I was very mad,” he said.

The Free Press contacted Gonzales for the article but he said he did not want to provide a statement because he thought he would be misquoted.

Gonzales said the Band Council would release a written statement to the press soon.

At Tuesday’s city council meeting, Councilman Chip Stone told Arevalo that he has attended Band Council meetings and would continue to, in order to improve their relationship.

“There’s no reason why we can’t work for the betterment of all of us,” Arevalo said.

ELKO – Will marijuana legally be sold in Elko starting this spring?

WEST WENDOVER – About three years since a ballot initiative legalized cannabis in Nevada, this month West Wendover will be the first city in E…

Is the Elko Indian Colony ready for big business?

ELKO – A proposal to ban marijuana sales in the city of Elko through a zoning ordinance is back on the city council’s agenda this week, but ac…

Band council to vote on marijuana business in Elko colony

ELKO – A proposed medical marijuana business could be approved by the Elko Band Council Sunday, on the heels of recent actions by county commi…

ELKO – Whether Nevada tribal councils will venture into the realm of selling recreational marijuana is up for question. Although many in the t…

ELKO – The Elko Band of Te-Moak is set to open its marijuana dispensary Saturday.

Elko Indian Colony resident Juan Arevalo spoke to Elko City Council members Tuesday about the plan to open a marijuana dispensary on the colony. Arevalo is vice chairman of the Elko Band and Te-Moak Tribe, but said he was speaking as an individual.

Former Elko Band Council and Te-Moak Tribe chairman Felix Ike spoke to Elko City Council in February about the plan to open a marijuana dispensary on the colony.