ELKO — Sometimes, people step up to the plate when others need help.

Whether it be sheer luck, an odd coincidence or planned by a higher being — whatever the case — Elko’s Tristin Ike was in the right place at the right time and took it upon himself to act quickly.

Early Friday morning, Oct. 2, 2020, a four-vehicle crash occurred on the westbound travel lane of Interstate 80 near the College Parkway overpass.

Luckily for those involved in the accident, Ike lives at the College Park Apartments, witnessed the wreck as it unfolded and sprang into action.

“At approximately 12:50 a.m., I left my apartment to have a cigarette. I watched a semi-truck driving down the highway, and I heard a loud thump,” Ike said. “The face of the truck started to the left toward the college then flipped. The trailer it was hauling pushed the truck farther.”

Ike went inside and grabbed a jacket, his keys and ran to his Jeep where he grabbed a headlamp and started running toward what he just witnessed.

“I called my recent contact and told her to call 911 to report a semi-truck crash and that I was running over to help,” Ike said.

While he was on the phone, Ike witnessed another semi heading toward the one that had just wrecked — “about four minutes in between” — and he saw the second semi slam into the first one that had flipped.

“I hung up my phone when I was almost to the highway fence. As I was climbing the fence, a third truck wrecked into the accident,” he said. “As I reached the top of the highway, the people from the third truck were getting out. I ran to them and asked if they were OK and if everyone was there. They replied and said ‘everyone was there and OK’ and I gave my phone to who I thought was the driver of the third vehicle to call whoever she needed.”

“It was really quick. We looked at each other, shook heads and introduced ourselves. It was literally like, I’m Tristin. He said ‘Luis’ and we started helping the second semi driver whose foot was injured severely,” Ike said. “We got on each side of him, lifted him up and started walking him away from the truck. The truck was already on fire, and it was spreading quickly. We sat him down and asked him if anyone was with him and he replied ‘no.’”

Ike and “Luis” then ran to the first semi driver, who was already outside of his vehicle and looking for his dogs that had ran off.

“We asked him if he was OK and if anyone else was with him. He replied that it was just him and his dogs, and he turned around to look for them,” Ike said. “So, we ran back to the second truck driver, who was pretty shook up.”

Ike and Luis then started talking and made sure everyone was accounted for.

“About 10 minutes passed and (Nevada Highway Patrol and Elko Fire Department) blocked off traffic and came up to us and asked if I was involved and ID’d me. I told them that I was not and that I saw what happened and ran to help,” Ike said. “He walked away toward the first semi-truck driver. I then went over to the third truck to check on them.”

As Ike approached the third truck involved, he said “the police” were pulling up and talking to the people from the third vehicle as he got closer.

“The second semi started making a high-pitched sound. I ran to the police car as people were piling in and jumped inside,” Ike said. “We drove up a little ways and all got out, and the second semi-truck exploded at that time — followed by multiple bursts of explosions from time to time.”

The driver of the third truck gave Ike his phone back and thanked for it.

“A different officer walked up to me and asked me the same questions as the first. I replied the same. He asked for my first name, so I gave him first name, he nodded and then asked for my last name. I told him, he nodded again and then asked me for my phone number. I gave it to him, he nodded one last time and told me I was free to leave,” Ike said. “He didn’t write my info down or what I had seen, what I did or what I was doing there, not in a report.”

Ike jumped back over the fence — covered in ashes — his lungs short of breath, wheezy and raspy.

“As I was walking back to my apartment, I had people coming up to me and asking me what happened. I told them as much as I knew,” Ike said. “I went inside and laid down for about three hours and went to work. When I arrived, I told them what happened. They let me take the rest of the day off to let my body recuperate.”

Ike is a prime example of an ordinary person who did extraordinary things when he didn’t necessarily have to, but he had to.

“What do you do in a situation like that? I couldn’t go inside and go to sleep like nothing happened. When people are in trouble, you have to help,” he said. “I had to do something. I had to act quickly and be decisive. Luis had the right mindset too.”

The community owes a debt of gratitude to Ike and “Luis” for taking action as the real first responders.

Ike struck out after multiple posts to his social media and contacts in trying to track down Luis as well.

“He was a tall, young Mexican with facial hair,” Ike said.

“We got on each side of him, lifted him up and started walking him away from the truck. The truck was already on fire, and it was spreading quickly."

Did you hear the blast from this crash in the middle of the night? 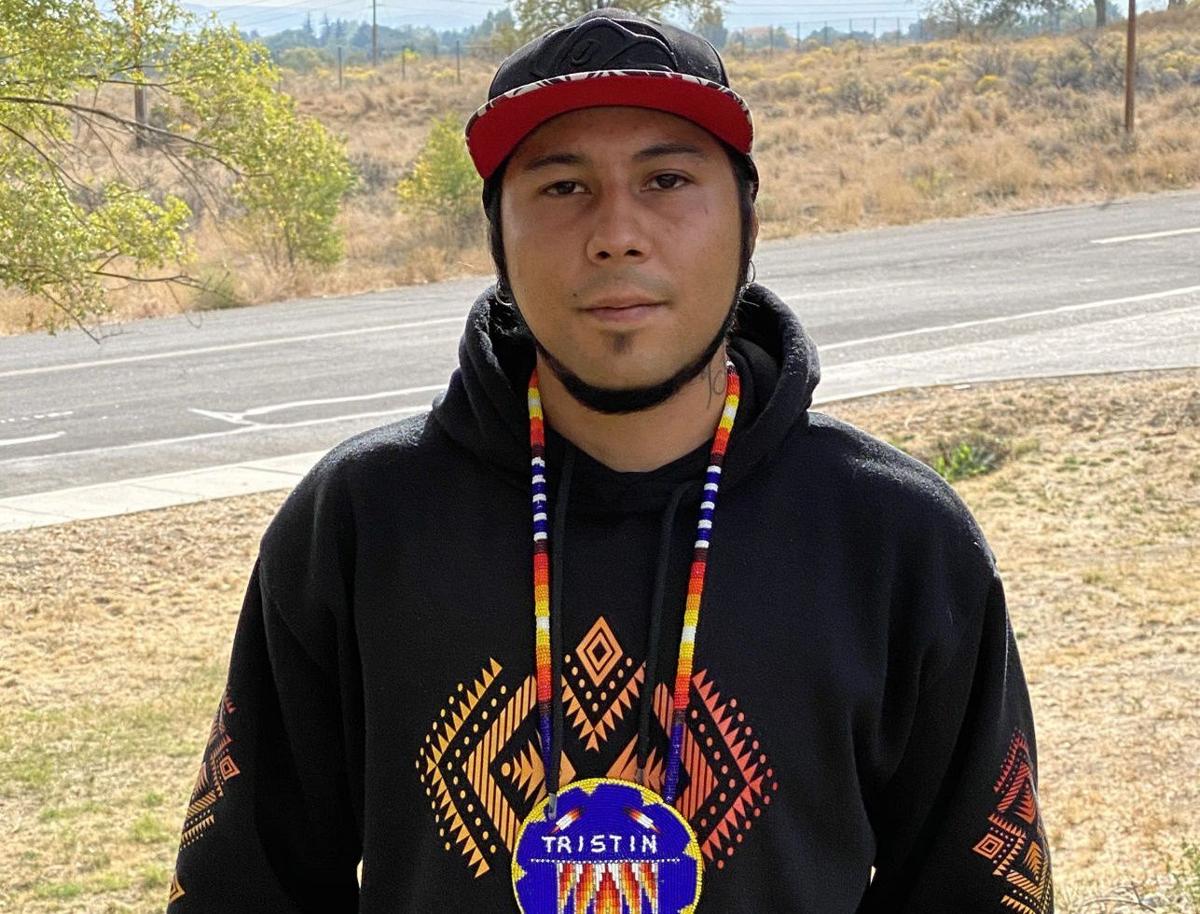 Tristin Ike stands outside his work Wednesday, Oct. 7, 2020, at Newe Cannabis. Ike leaped in action the early in morning of Oct. 2, 2020, when he assisted victims of a multi-vehicle crash on Interstate 80 near the College Parkway overpass. 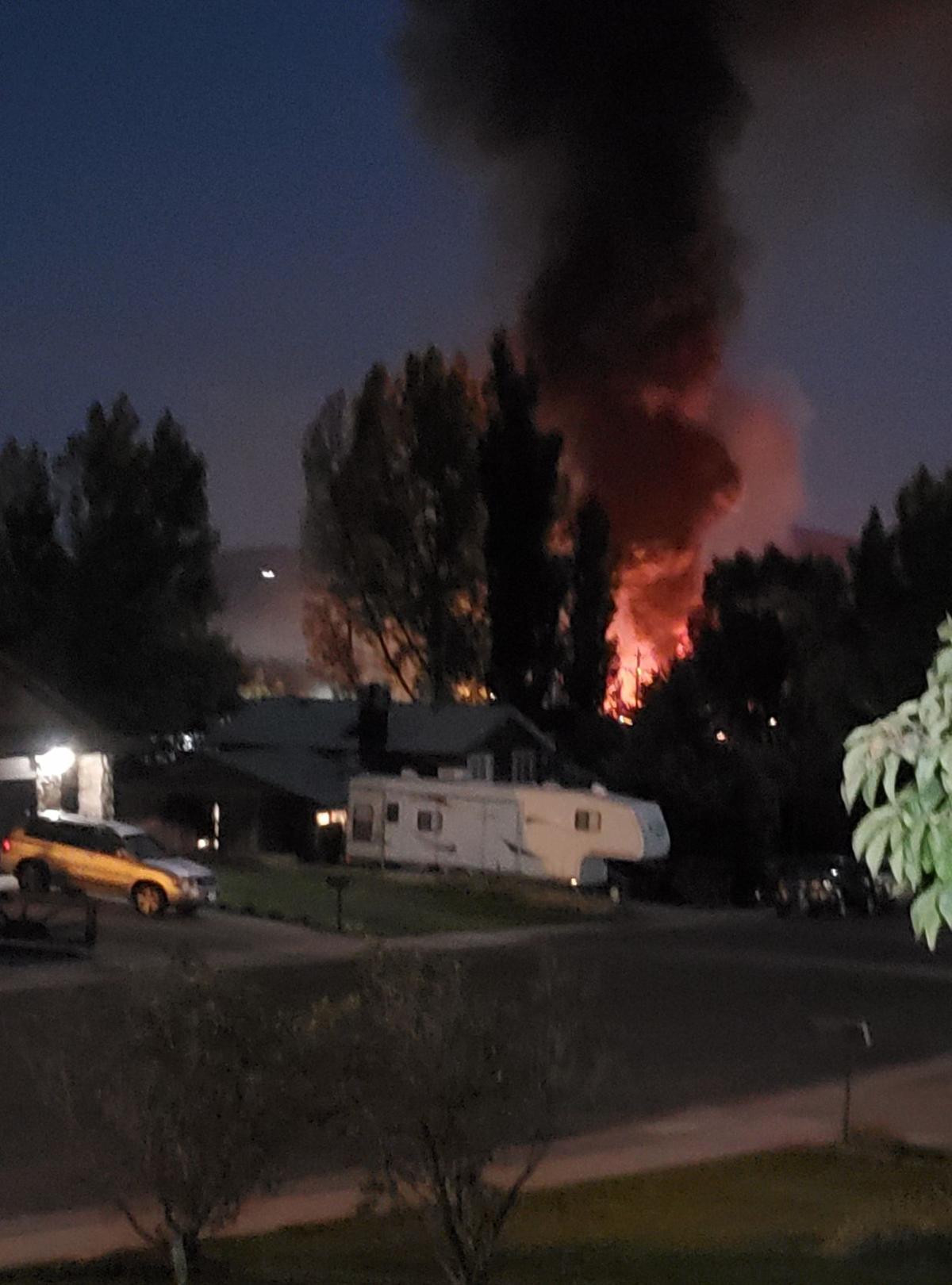 Alisha Coakley sent in this photo of flames rising above homes near the Elko Peace Park following a crash on Interstate 80. 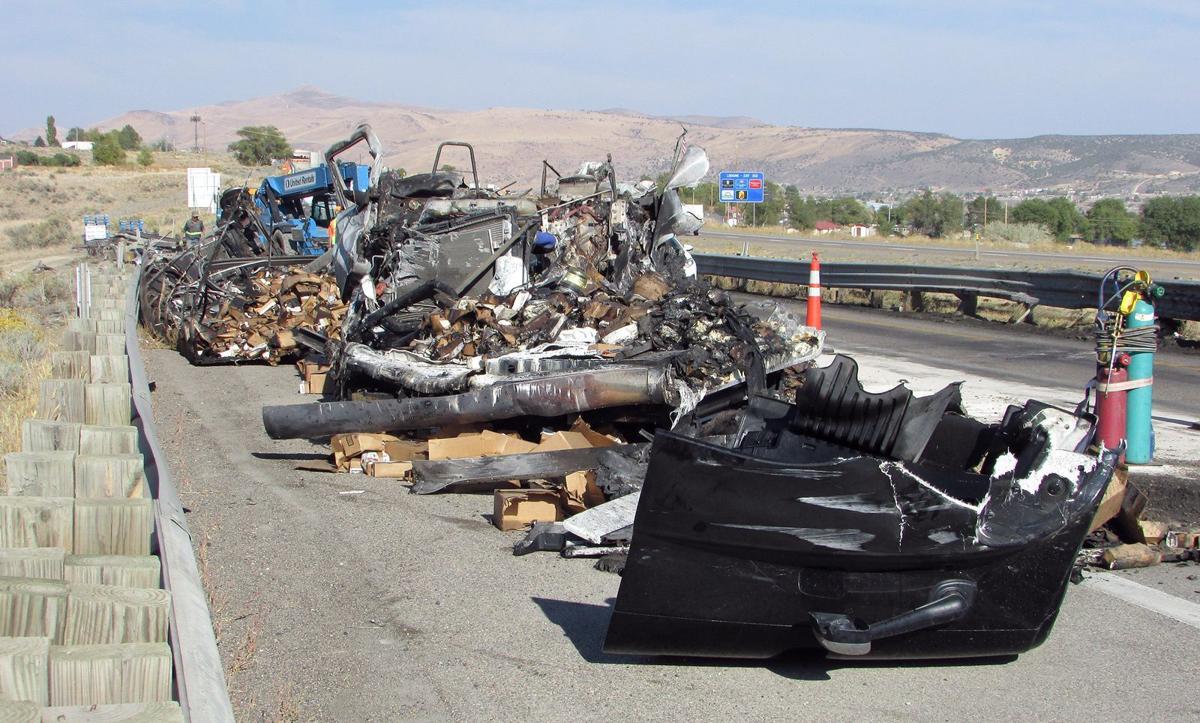 Some of the charred remains from a four-vehicle crash on Interstate 80 were waiting to be hauled off by state highway crews around 4 p.m. Oct. 2, 15 hours after they collided in the dark. 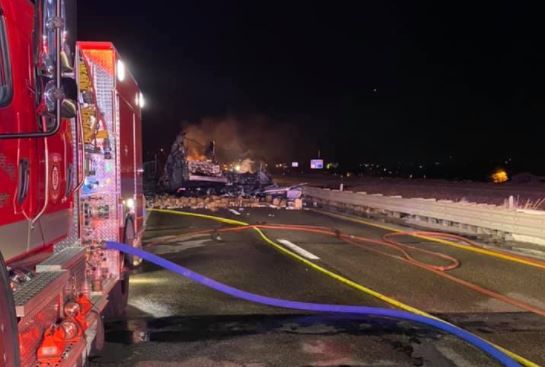 The Elko Firefighters Association posted this photo of a crash on Interstate 80.