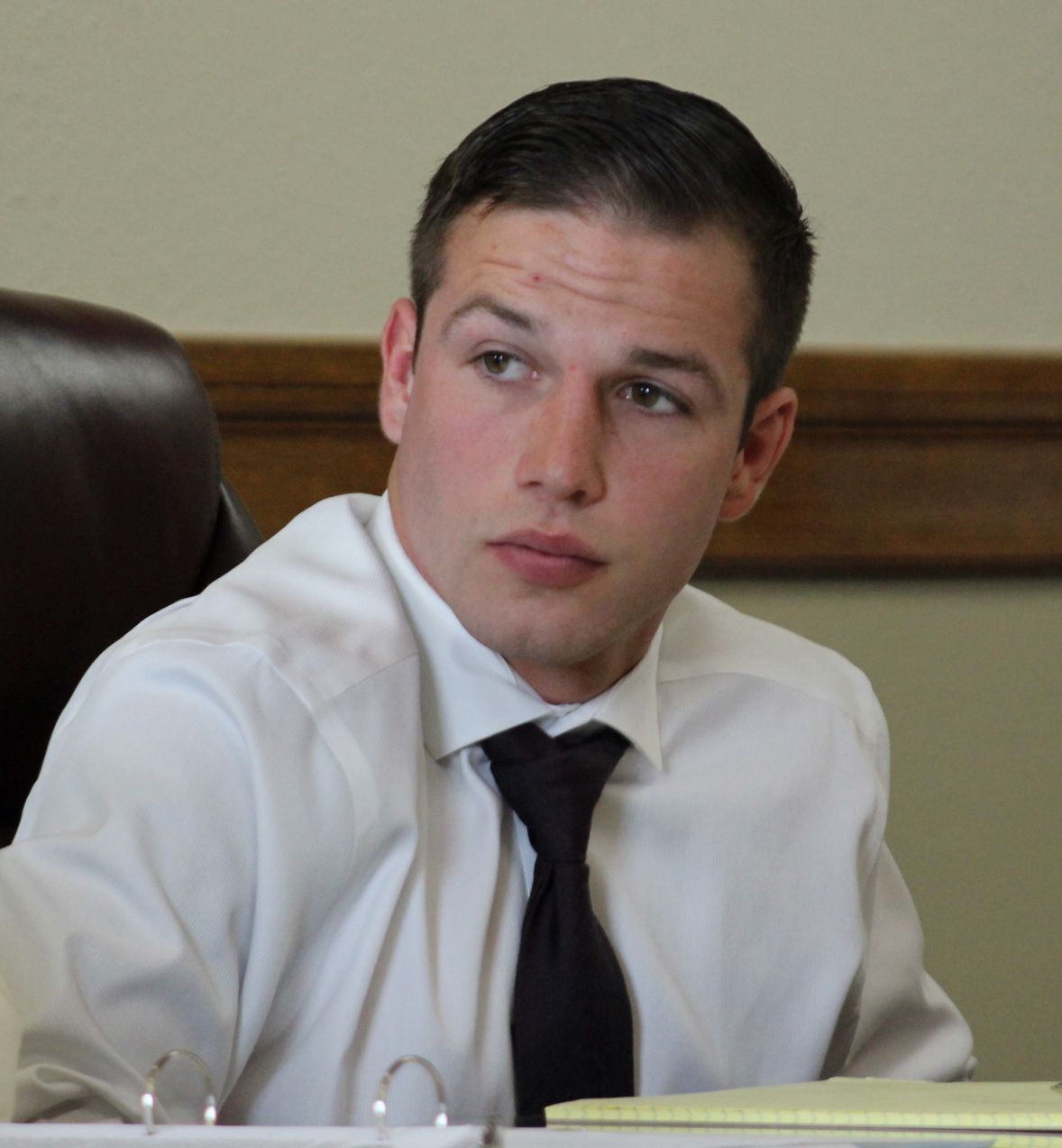 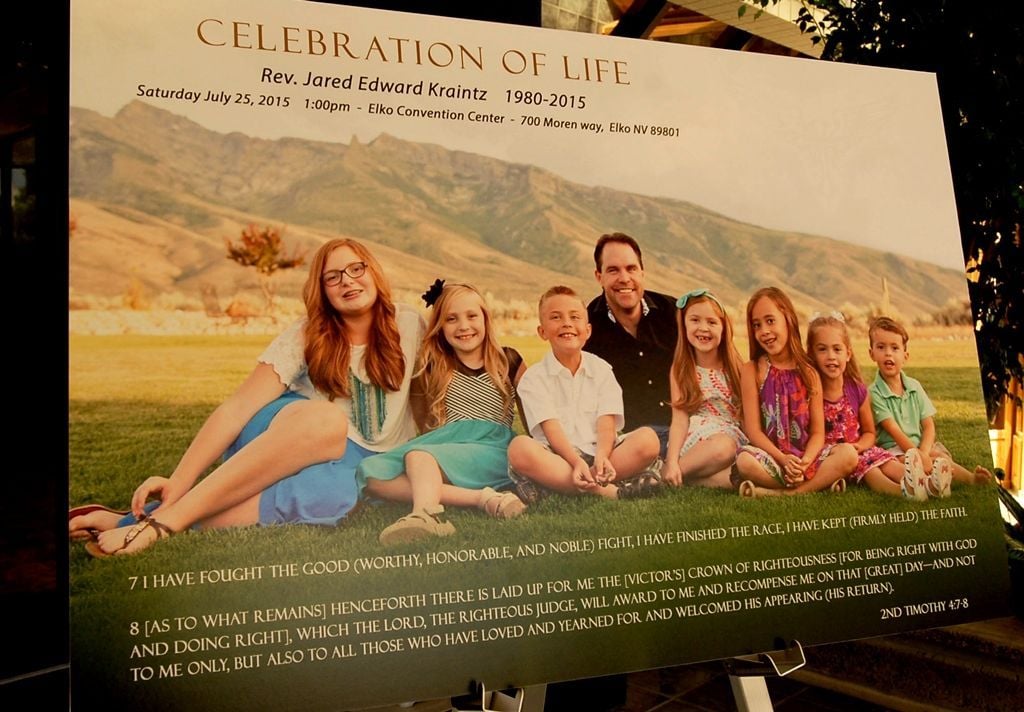 A poster at the entrance of the Elko Convention Center welcomes those who attended the service for Jared Kraintz last July. 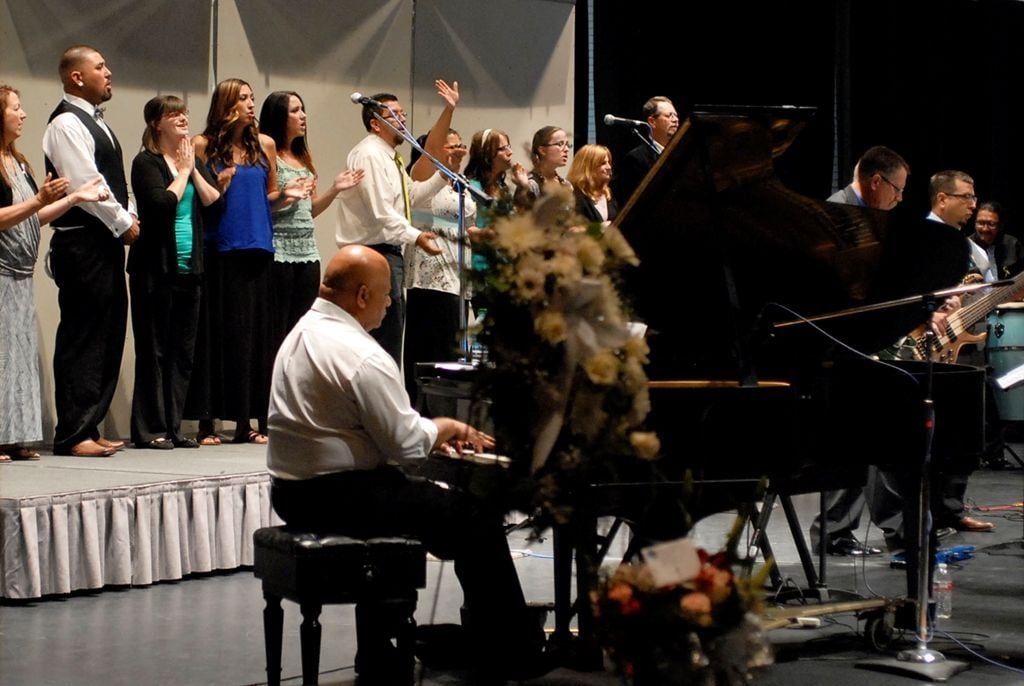 Many people who sang with Jared Kraintz came on stage to perform one of his favorite songs.

ELKO — Less than a year after the Rev. Jared Kraintz, 35, died from being hit by a car at Wal-Mart, the driver was found guilty of vehicular manslaughter.

Tyler J. Demerath, 22, was tried before Justice of the Peace Mason Simons Wednesday on three misdemeanor counts: vehicular manslaughter, operating a motor vehicle without a driver’s license, and operation of a motor vehicle while registration is suspended.

Count four of operating a motor vehicle without insurance was dismissed.

Deputy District Attorney Chad Thompson said the license and registration charges are easily proven beyond a reasonable doubt. Demerath’s California driving record shows his license was expired and he did not get another until October, said Thompson. The license he provided to law enforcement at the time of the accident had expired July 3.

In regard to the vehicle, Thompson cited the suspended registration record from the Department of Motor vehicles, because of a lack of insurance. The state of California required insurance verification from Demerath.

Surveillance footage was shown in court to further the validity of the manslaughter charge.

“With regards to the one that we’re really here about today (vehicular manslaughter), whether or not he was committing an act or omission that constituted simple negligence,” said Thompson, defining negligence under Nevada Revised Statutes to the court. “The ordinarily prudent person, would they have done this?”

He cited two witnesses — Anita Vignali and Jason Creamer — who claimed Demerath was driving too fast for his surroundings.

This caused Thompson to ask if the driver was taking the curb and traversing the crosswalk too fast, especially in consideration of Detective Dennis Price’s testimony stating Demerath’s calculated approximate speed was 9.5 mph.

“You’re talking about two-and-a-half to three times the speed of the other traffic,” said Thompson, explaining Demerath should have expected to encounter pedestrian traffic at that crosswalk and questioning the prudence of Demerath’s actions.

The State claimed Demerath’s negligence stemmed from excessive speed and other dangers that impeded his ability to assess the situation and reduce his speed.

The dangers included a car parked in front of the lamppost before entering the parking row where Kraintz was hit, and other pedestrians in the area. Police also stated Demerath was sitting in a reclined position while driving.

Demerath told the authorities he made a wide turn in case someone was behind the parked car.

“Mr. Kraintz, when you watch the video, he is in the crosswalk when he is struck,” said Thompson.

Thompson said the evidence suggests the incident was an accident, but it was also “simple negligence.”

Negligence is a key point in the NRS definition of vehicular manslaughter.

“It is a true tragedy,” said Demerath’s defense attorney Sherburne Macfarlan, explaining tragedy is a word to sum up what happened in July.

Even though there was a horrendous outcome with the death of Kraintz, Macfarlan said the question becomes whether Demerath “committed any wrongs in terms of the allegation of vehicular manslaughter.”

“Basically what we’re talking about here is an unavoidable accident,” he said.

Macfarlan said the surveillance tape shows the other “vehicular traffic not traveling any faster or any slower” than Demerath — showing, in comparison, he was not driving at an excessive speed.

The defense discussed circumstances pointing to this not being a criminal act but a tragedy. Had Kraintz been standing in the same location, the vehicle before Demerath’s may have struck the victim.

Additionally, Macfarlan brought up the same witnesses Thompson did but pointed to their testimonies stating the parked car in front of the aisle created a blind spot, with the pedestrian appearing from behind the vehicle.

The prosecution said this point furthered the State’s case as Demarath turned wide but did not decrease his speed.

“The other issue here is causation,” Macfarlan said bringing up the statute. “... What we would suggest is the causation, in terms of what actually led to this accident, really had to do with Mr. Kraintz himself.”

The surveillance video shows the victim walking in an “oblique angle,” and Creamer’s testimony said Kraintz did not appear to be paying attention but was looking down.

“We all have obligations in this world and I guess one of them is to be aware of what’s going on, but pedestrians have that obligation as well,” said Macfarlan.

The State, in the defense’s opinion, did not prove beyond a reasonable doubt that Demerath did an act or omission, or his vehicle was the proximate cause of the collision.

Simons discussed highlights from witness testimony including Vignali, stating it didn’t sound like Demerath’s vehicle was going to slow down.

Before pronouncing the verdict, Simons stated he would describe most of the vehicles in the parking lot as “creeping.” He conceded that a blind spot is not unusual under the circumstances. However, it was the obligation of the defendant to act in a prudent manner.

“I think he has a greater responsibility to make sure the speed is especially slow,” said Simons, explaining the speed Demerath was traveling at is what this case comes down to.

“Failure to reduce the speed adequately is the approximate cause of the accident,” said Simons.

Sentencing was continued until an unnamed July date as there may be restitution issues, as well as waiting for the presence of the Kraintz family in the courtroom.

Penalties for the count of vehicular manslaughter can include up to six months in jail, $1,000 in fines and the suspension of the driver’s license for a year.

According to Free Press files, Kraintz was hit by the left, front side of a Dodge Neon that was driven by Demerath.

The impact reportedly caused Kraintz to fall and strike his head on the pavement. He was initially taken to Northeastern Nevada Regional Hospital, before being flown to Renown Medical Center in Reno.

Police reported in September their investigation of the fatal incident was complete and had been sent to the Elko County district attorney for review and a charging decision.

“Failure to reduce the speed adequately is the approximate cause of the accident.” — Justice of the Peace Mason Simons

“Failure to reduce the speed adequately is the approximate cause of the accident."

-- Justice of the Peace Mason Simons

ELKO — Police reported Friday that the investigation of a fatal incident in the Wal-Mart parking lot is complete, and they have sent it to the…

ELKO – Hundreds of people filled the Elko Convention Center on Saturday afternoon to celebrate the life of the Rev. Jared Edward Kraintz, who …

ELKO — Family members have confirmed that the Rev. Jared Kraintz, 35, of Elko died Thursday morning resulting from injuries sustained in a veh…

ELKO — Elko police have released the names of the two people involved in a parking lot accident Wednesday night.

ELKO — A man was seriously injured when he was hit by a car Wednesday night.

ELKO – It was early in March of 2018 that Priscilla Kraintz received a telephone call from the Elko County District Attorney’s office.

A poster at the entrance of the Elko Convention Center welcomes those who attended the service for Jared Kraintz last July.

Many people who sang with Jared Kraintz came on stage to perform one of his favorite songs. 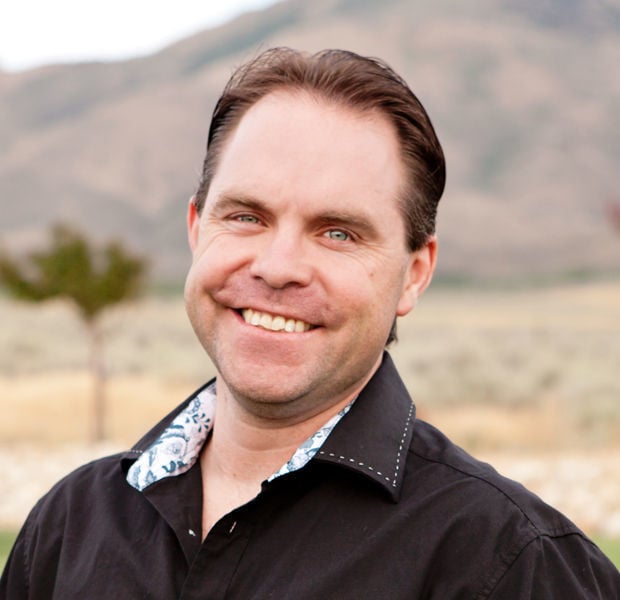