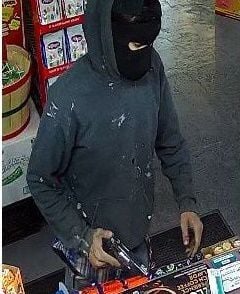 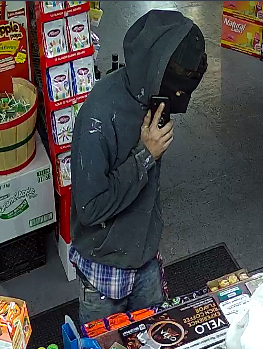 ELKO -- The Elko Police Department is seeking public assistance in identifying a suspect in two armed robberies that occurred Sunday evening in the City of Elko.

The first robbery was at approximately 5:30 p.m. at a convenience store in the "tree streets" area of Elko. The suspect produced a silver handgun and demanded cash and a carton of cigarettes, then fled the business on foot in an unknown direction.

The second robbery occurred about an hour later at a gas station on Idaho Street. The same suspect again produced a silver handgun and demanded cash and a carton of cigarettes, then fled in what was described as a dark colored "beat up" passenger car.

The suspect is described as a white or light complected Hispanic or Native American male adult, between 5 feet 10 inches and 6 feet tall, with a slender build, approximately 150 to 160 pounds.

He was wearing a grey sweatshirt with white paint spots, blue jeans, tan work boots and a black mask. A blue and white plaid shirt can be seen under the sweatshirt.

A red, white and blue key lanyard can be seen in the suspect's pants pocket.

Anyone with information is encouraged to contact the Elko PD detective Unit at 775-777-7310.

ELKO – An Elko man was arrested Nov. 4 on a robbery charge about two hours after he allegedly grabbed a casino voucher from the hand of a patr…

ELKO – A man suspected of attempting to steal a go-cart from C-A-L Ranch on Saturday was arrested Monday, and found to be in possession of tra…

ELKO – An estimated $25,000 worth of jewelry — including a diamond necklace and a Rolex watch — was taken from a man who was robbed and beaten…

US military options to help Ukraine if Russia acts

US military options to help Ukraine if Russia acts