ELKO – If a proposed education funding formula is signed into law, the Elko County School District would be “forced to make major staffing and programming cuts.”

That is the prognosis stated by Superintendent Todd Pehrson in his testimony to a joint meeting of the Senate Committee on Finance and Assembly Committee on Ways and Means on May 21.

The nearly seven-hour-long session this week included input from school superintendents and representatives from other entities affected by the education bill.

The potential impacts of the education formula were unknown in January when it was addressed by school district officials. Now, more than four months later, the district is taking a hard look at what challenges lie ahead.

If SB543 becomes law, the district’s budget would be frozen for multiple years, Pehrson said. The effects would be felt at all schools throughout the school district, including one-room schools, combined schools and more populated schools in Elko, Spring Creek and West Wendover.

“[The district] would be held at our current budget until we become balanced with the new formula. This would take seven-plus years,” Pehrson told the Elko Daily Free Press.

Although Owyhee Combined Schools, which is located on the Duck Valley Indian Reservation, receives Title I federal funding they could also feel some effects, Pehrson added.

Speaking against the bill on Tuesday, Pehrson told lawmakers that the lack of specific numbers showing how much the district could lose in light of increased enrollment prevents him from giving any support to SB543.

“… I do not have any tangible numbers that show the true outcomes this bill could cause to our district,” Pehrson read from his prepared testimony, asking lawmakers how long the budget would remain flat.

“This is a major concern with the trend of a growing population,” Pehrson continued. “The recent opening of Long Canyon mine has already contributed to growing student numbers.” 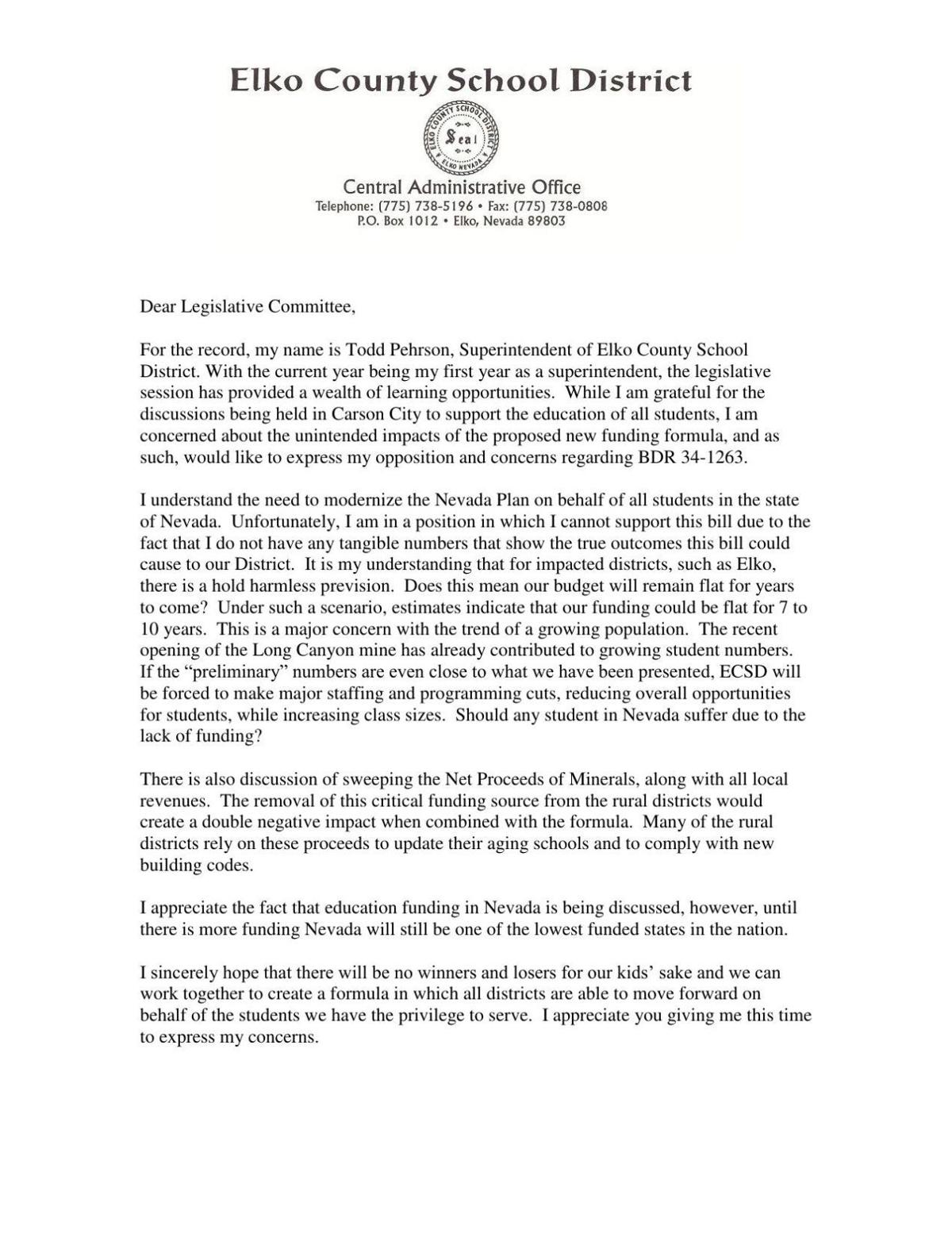 Pehrson also cited a proposed sweeping of net proceeds of minerals which could have “a double negative impact” on rural districts.

“Many of the rural districts rely on these proceeds to update their aging schools and to comply with new building codes,” Pehrson explained in his testimony.

The legality of putting mine tax revenue into one lump to be distributed to schools throughout the state has already been challenged by Humboldt County School District Superintendent David Jensen, reported by The Nevada Independent on May 22.

“There is a good possibility that this could be challenged,” Pehrson said.

Budget cuts may take place within the first seven years of the bill’s passage, as the district would be in a deficit spending mode.

Teacher layoffs would be dependent on the budget and enrollment for the fiscal year 2020, Pehrson said, and upgrades for resources and technology would “suffer.”

Possibly one of the areas not impacted would be capital project funding, which is through the pay-as-you-go levy.

“These projects would probably not be messed with,” Pehrson said.

Also not in danger is the School Resource Officer program, despite two budget committees approving a $30 million cut to school safety initiatives statewide. About $120 million in marijuana sales tax revenue would be rerouted to education for the next two fiscal years.

“As of right now, we have no intentions of cutting any SROs,” Pehrson said on Thursday.

This is not the first time the district has had to work around budget cuts. The 2008 recession put the Elko County School District in a precarious position for several years. The district recovered just a couple of years ago, but not before learning to do more with less.

Now, the district may have to face that situation again.

“There are so many uncertainties at this time,” Pehrson said. “Unfortunately, this could be our future.”

An initial hearing for SB543, the legislation that would revamp Nevada’s school funding formula, drew technical concerns from lawmakers and fr…

ELKO – The Elko County School District could lose as much as $1,600 per student if a new funding formula is approved in the upcoming legislati…

New formula could be 'devastating' to some  rural districts

In an effort to help school districts that say they can’t afford teacher raises promised by Gov. Steve Sisolak, state lawmakers have introduce…

Back to school: What's changing this year?

ELKO – Students heading back to class on Monday will be greeted by many changes.

Elko County voters may see the pay-as-you-go tax on their ballot this November.