The crowd applauds while Sheriff Aitor Narvaiza talks to the Elko County commissioners about joining a lawsuit against Nevada's new red flag law Wednesday. The commissioners approved a motion to join the lawsuit. 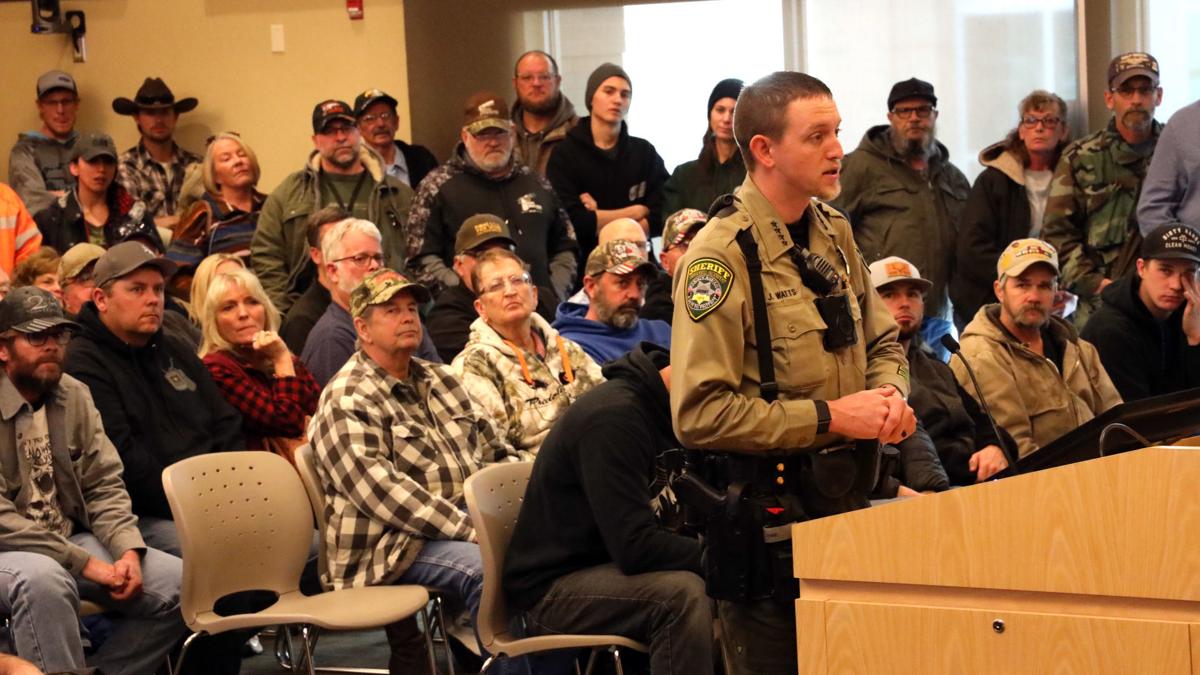 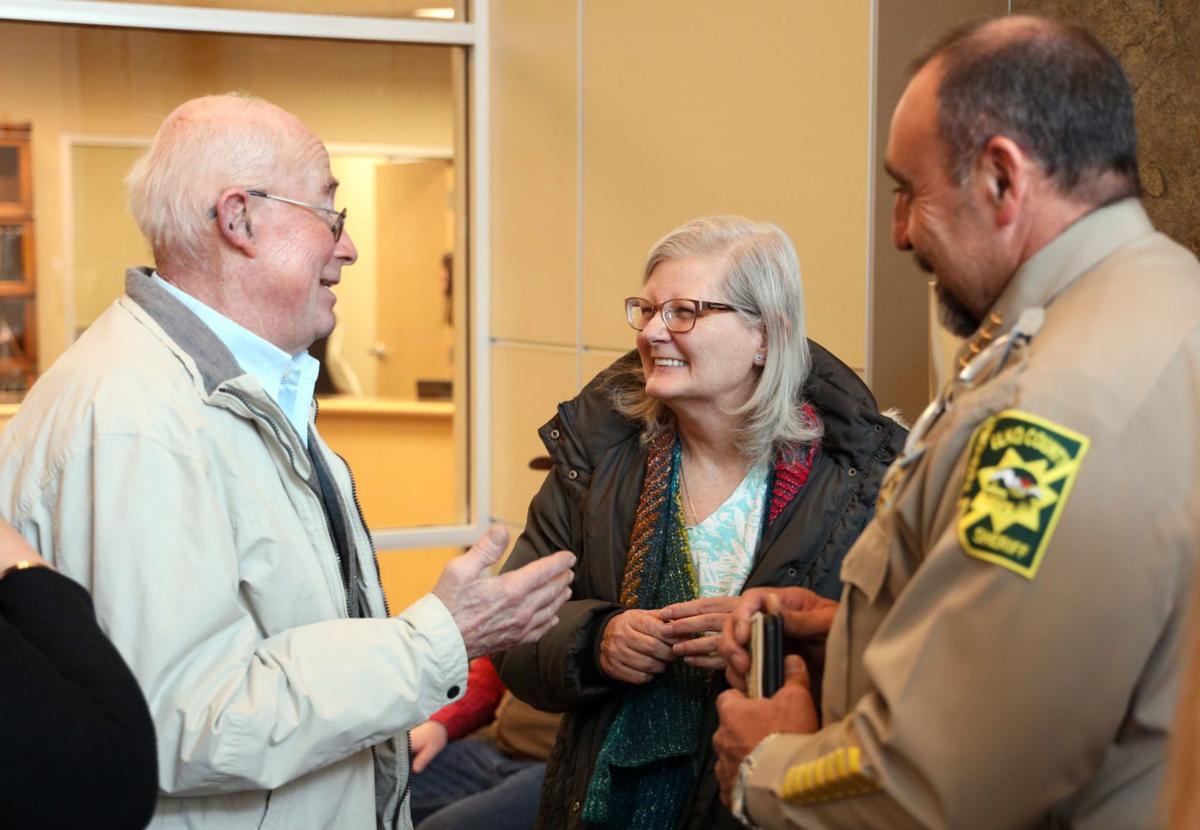 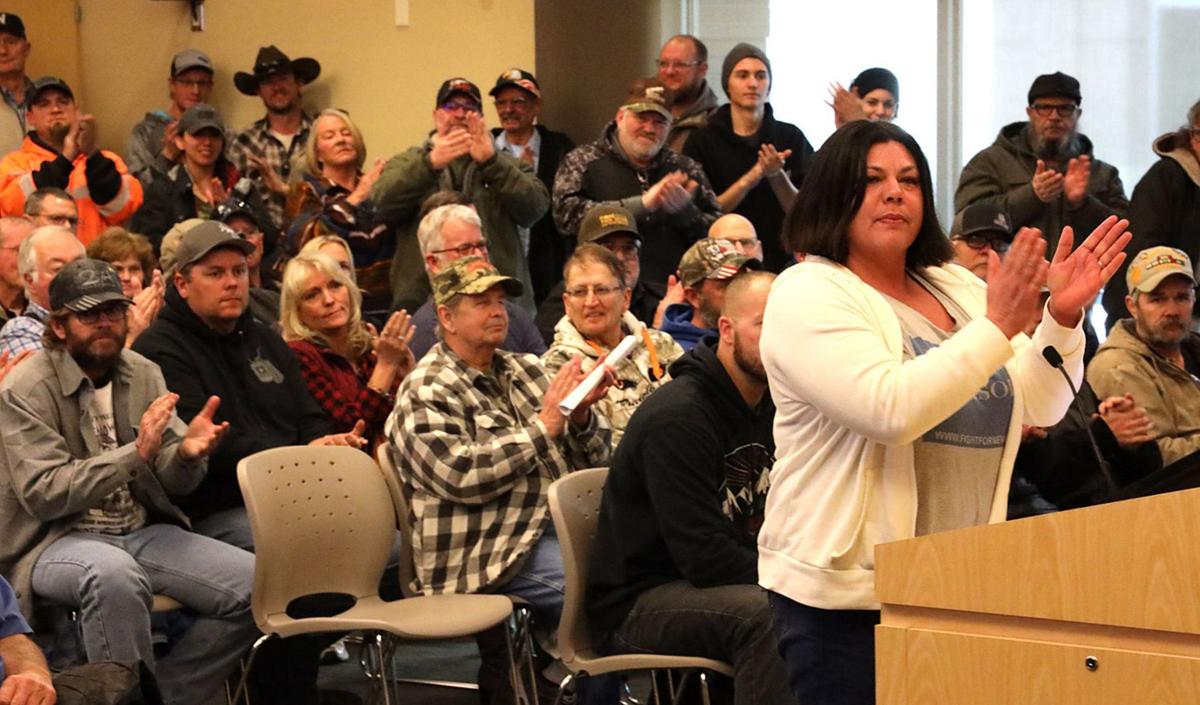 Angela Blass, president of Fight for Nevada, applauds while talking with the crowd at Wednesday's Elko County commission meeting. The commissioners approved a motion to join a lawsuit against Nevada's new "red flag" law.

ELKO — “Elko County does it again,” County Commissioner Demar Dahl said at the end of Wednesday afternoon’s commission meeting. Dahl was talking to a group of more than 200 people who crowded into the commissioners’ chambers to support Second Amendment gun rights and criticize Nevada’s new “red flag” law.

“You know this, that the agencies pay more attention to you when you’re willing to stand up,” Dahl said.

Like the crowd that gathered at the commissioners meeting on March 20, 2019 to express their support for Elko County becoming a Second Amendment Sanctuary County in response to Nevada’s new gun background check law, Wednesday’s crowd was vocal, applauding and shouting support for comments made throughout the meeting.

The commissioners approved a motion to join the lawsuit which Nevadans Citizen Action Network, a nonprofit group, filed on Dec. 4 seeking to block Nevada’s red flag law that went into effect on Jan. 1. The new law, like other red flag laws around the country, allows people to petition a court to temporarily seize a person’s firearms if the person displays high-risk behaviors.

The red flag law was part of AB291, which included several firearms regulations. The red flag provision was added late in the legislative session, after a major amendment to the bill removed sections that would have allowed local governments to pass their own strict gun laws.

“I am here today to stand shoulder to shoulder with Sheriff Narvaiza and to partner with Elko County,” Watts said.

Elko County District Attorney Tyler Ingram explained Wednesday that Elko County had several options for expressing their support for the lawsuit. One option would be to approve a resolution, which would not involve actually joining the lawsuit, and no one in the room was interested in this option. Ingram said there are two ways to join the lawsuit: to intervene, or to file an amicus brief, a “friend of the court” document.

The commissioners approved a motion which basically says the county will file a motion asking the court to allow the county to intervene in the lawsuit or to file an amicus brief, and will also file the intervention and amicus brief documents stating the county’s position on the red flag law.

Discussing the costsThere was some discussion about the potential costs of joining the lawsuit.

Ingram said there is a potential that if the lawsuit loses, the county could be required to pay some of the Nevada Attorney General’s office expenses. He said it is hard to estimate how much those costs might be.

“I don’t know how much work the attorney general’s office is going to put into this,” Ingram said. “I don’t know what their time is and what their resources look like at this point.”

“If an agency fails to enforce these laws and that results in harm or death, that agency and its agents may be subject to civil liability,” the statement said.

On the other hand, at Wednesday’s meeting Elko County resident Eva Owsian suggested that trying to enforce the red flag law could result in legal expenses.

“I could call in and say my neighbor is crazy, and you go and take everything and it turns out that they’re not. If you think that person is not going to sue — if it was me, I would sue. And that’s going to cost you more. You’re going have to hire someone who is going to have to be qualified to determine who is mentally unstable and who isn’t.”

Toward the end of the meeting, Elko resident Gary Walker said, “I know some concerns about costs have come up. But my rights are not for sale.”

At that start of Wednesday’s meeting, Elko County Sheriff Aitor Narvaiza talked about his thoughts on the red flag law, and received several rounds of applause.

Narvaiza said the red flag law, which he said allows people’s guns to be taken away based only on allegations, violates due process and Second, Fourth and Fifth Amendment rights.

“Let’s enforce the laws that we have which are reasonable instead of enacting more laws which are unconstitutional,” Narvaiza said.

“A great president once said this country cannot be defeated in combat, but it can be defeated within. Right now this country is crumbling, slowly, due to weak-minded politicians and lawmakers who push unconstitutional laws for personal gains and to fill their pockets.”

“There is a conflict brewing in the United States now on this issue. If we don’t stand up to the government, we are overlooking the very spirit that was once the key founding issue that led to the creation of our great country. If we set aside these rights now, what other rights are we willing to give up?”

“I know you have a long fight if you choose to go this route,” Narvaiza said. “And I’m here to tell you I’ll do everything in my power, anything you ask me to help support you guys, the commissioners, and the people of Elko County.”

Around 20 members of the public spoke at Wednesday’s meeting, all in support of fighting the red flag law. All of the commissioners and District Attorney Ingram also expressed their support for fighting the law.

“I want to tell Sheriff Aitor that we the people of Nevada and Elko County support you 200 percent,” said Angela Blass, president of Fight for Nevada, the effort to recall Gov. Steve Sisolak. “We are recalling the governor on the basis of being of being unconstitutional and passing laws illegally. Petitions will be out Feb. 15 all across the state. … We have thousands if not a million people at least following us now.”

Janine Hansen, a lobbyist and the state president of Nevada Families for Freedom, said, “The interesting thing about AB291 was that they never held a single hearing for the public to attend. They put it in another bill that had already passed and sneaked it through, without a word of public comment, because they know what the public comment would be. Of course this bill was based on the initiative that Bloomberg paid for in Nevada; he spent $18 million to get it passed.”

Hansen said she talked Tuesday with Mary Rooney of NevadansCAN.

“She told me how important it was for the counties to intervene to raise the level of importance of the lawsuit,” Hansen said. “There is nothing more important that you can do. Even if it was to be a fact that Elko would be assessed some amount of money to pay for this, we want you to commit yourselves to pay to defend our constitutional right to keep and bear arms.”

“George Mason said to disarm the people is the most effectual way to enslave them,” Hansen said, “and we are very concerned because we know that the right to keep and bear arms undergirds every other right we have.”

Lt. Kevin McKinney of the Elko County Sheriff’s Office said, “For the last 200 years the Bill of Rights has been eroded, and we need to draw a line in the sand. If this continues, we don’t know what’s going to be next. We’re going to lose all our rights. The Bill of Rights was designed to protect individuals from the government. And the government is taking that away. The state government at this point is taking away our individual rights, and so it’s incumbent on the county to step in and intervene, and I believe we should take every legal action that we can to do that.”

Commissioner Jon Karr assured the crowd that the county’s district attorney office will do a good job of putting together documents that will express the county’s views on the red flag law.

“These guys are going to go with guns ablazing,” Karr said. “Don’t worry about that part, how it’s worded. The talent we have up here will go after it.”

Let commissioners know if you want the county to join the lawsuit ...

Eureka sheriff writes letter to Sisolak, says he’ll resist new 'red flag' gun law 'until there is no fight left in me'

Nevada’s new “red flag” law will go into effect Jan. 1, and it is raising red flags among those who are concerned about Second Amendment right…

ELKO – You may not be able to visit a clothing store or get a haircut right now, but in Nevada “the right of the people to keep and bear arms”…

Enter just about any private business in Nevada, and if a “No guns allowed” sign is posted outside the premises, it doesn’t carry much legal weight.

The crowd applauds while Sheriff Aitor Narvaiza talks to the Elko County commissioners about joining a lawsuit against Nevada's new red flag law Wednesday. The commissioners approved a motion to join the lawsuit.

Angela Blass, president of Fight for Nevada, applauds while talking with the crowd at Wednesday's Elko County commission meeting. The commissioners approved a motion to join a lawsuit against Nevada's new "red flag" law.