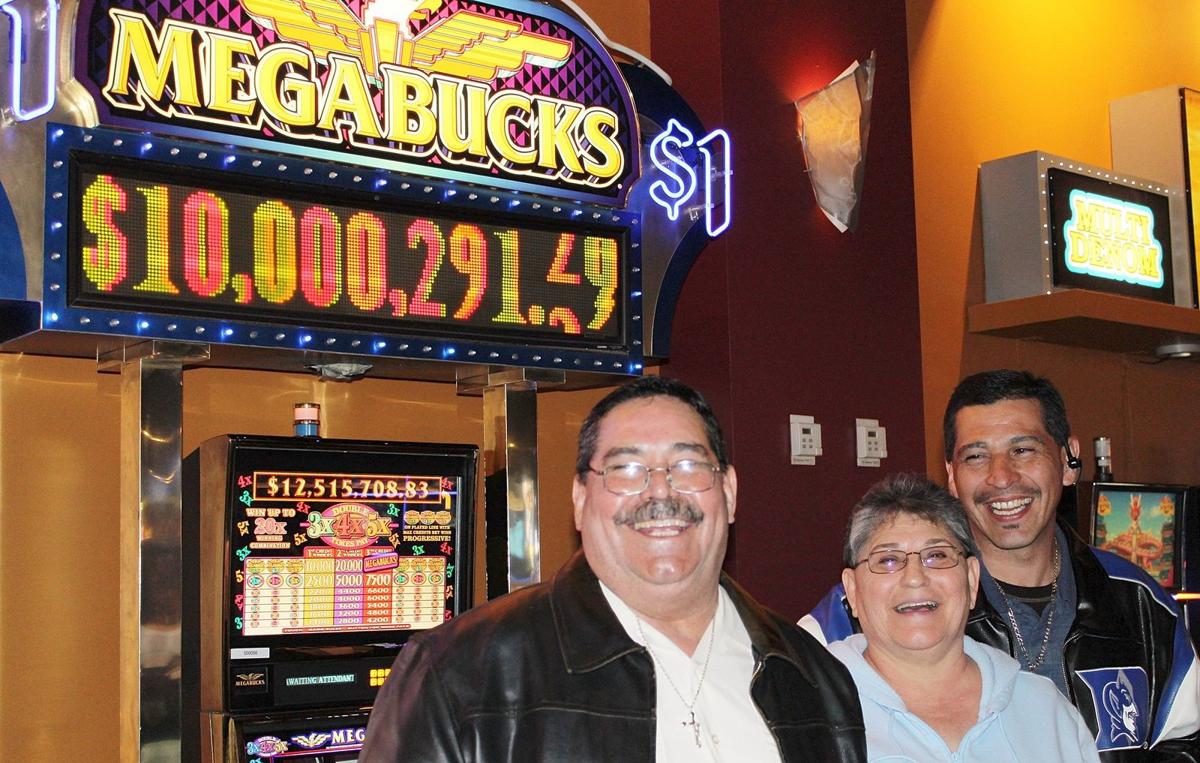 Efren Aguirre, left, smiles in March 2016 after hitting a $12.5 million jackpot at Gold Dust West in Elko. His wife, Maria, and son, Efren Aguirre Jr. stand with him for a photo. 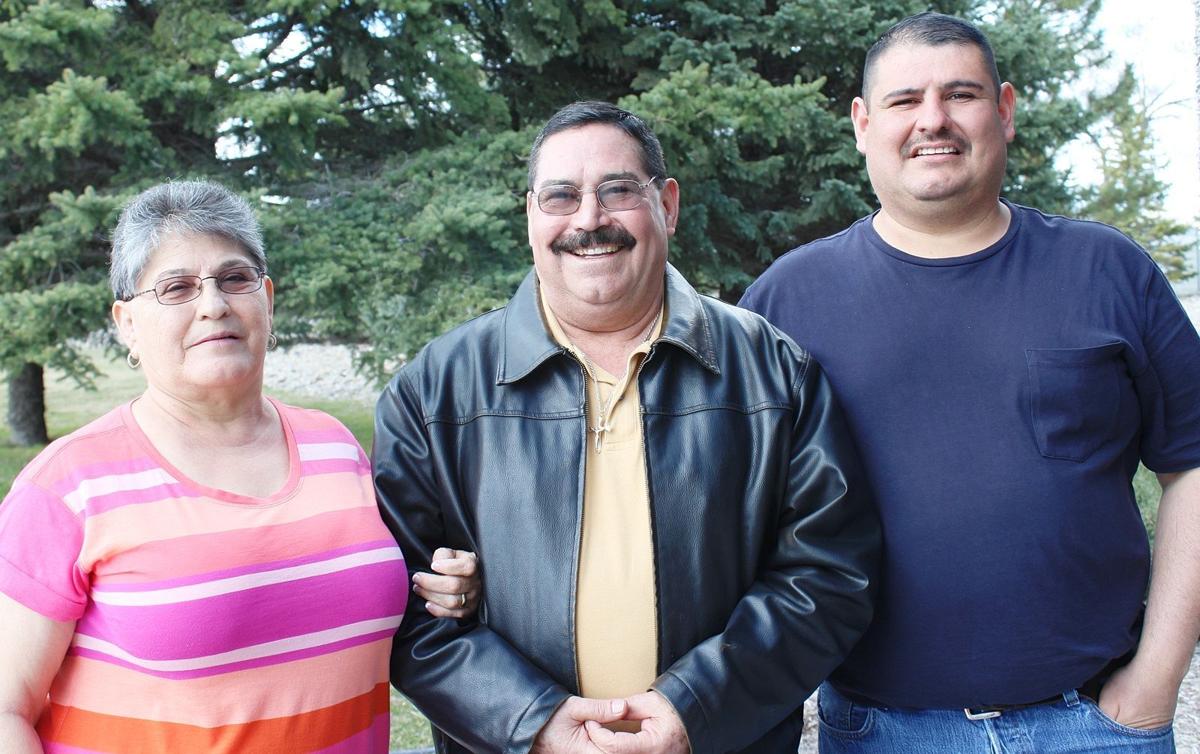 Efren Aguirre, middle, poses with his wife Maria and their son Noel Thursday at the Elko Daily Free Press.

ELKO – A 64-year-old gold miner said he is going to continue working in the underground at Newmont Mining Corp.’s Leeville despite winning more than $12.5 million in March.

“He had $100 in the machine and it hit on the seventh spin,” said Gold Dust West Marketing Manager Stacey Yurmanovic Sawyer.

When he hit the jackpot, Aguirre said he called over a Gold Dust employee and said, “‘hey something happened to my machine, it’s not running no more, maybe broke.”

The employee told him, “no, you won a big pot.”

The first employee thought he won $1,200, but the second employee to come up told him he won $12.5 million, Aguirre said.

His wife Maria was at another machine when he told her he won. She cashed out her money to see how much her husband received.

“I didn’t believe it, and then my tears come out and I ask him if he’s OK,” she said.

Maria Aguirre said she was worried Efren Aguirre was going to become sick, but he acted as if nothing had happened.

He said he was just happy his supervisor had given him the following day off. Efren Aguirre had worked a full day shift at Leeville on Tuesday and asked his supervisor if he could have the next day off. After his boss said yes, he decided to go to the casino that night.

“I say a big thank you to Terry King for giving the PTO,” Efren Aguirre said.

Maria Aguirre said she called one son, Efren Jr., to let him know about the winnings, but their other son, Noel, found out through employees at Newmont.

Noel Aguirre also works at Leeville. He was on night shift when he received a message that his father won the money. Newmont employees saw posts about the jackpot on Facebook and called the Leeville dispatch. The dispatcher told Noel Aguirre to call him.

“I didn’t believe him,” Noel Aguirre said. “I was like ‘quit lying to me. Let me work. I’ve got to work, you guys. This ain’t funny.’ So then I called my boss and asked him to go check.”

His boss checked and told Noel Aguirre to go home because he didn’t want him to get hurt when his mind was focused on his family.

Efren Aguirre said he came to the United States for “more money” but never expected this much.

He immigrated from Parral, Chihuahua, Mexico, in 1968. He started working in the mining industry in 1973 and has worked for Newmont for 16 years.

He is a rock breaker operator in the underground.

Aguirre said he wants to keep working to “stay busy.”

Maria said the first thing friends asked was if Efren was going to quit his job.

The couple is going to put most of the money away for a rainy day. However, he and his wife of 44 years did splurge a little Thursday. She said the money allowed them to buy their “dream house” on Beverly Circle in Elko.

Maria Aguirre said she has always wanted it, but she never wanted to go into debt for a new home.

This is the first new home they have bought, said Noel Aguirre. The couple has a home in Arizona that was built in the 1950s and they have a trailer in Elko.

Efren Aguirre said he also is going to pay off the mortgage on Noel Aguirre’s home and buy his other son, Efren Jr., his own house.

The IGT Megabucks is a dollar coin slot machine that must have three coins played to hit the jackpot. The jackpot is reset to $10 million after it is hit.

According to a website that tracks Megabucks, this is the first time the big jackpot was hit in Elko and according to IGT this is the largest jackpot payout for Gold Dust West in Elko.

The Aguirres said they took a one-time payment, after taxes, on the winnings.

Efren Aguirre said he came to the United States for “more money” but never expected this much.

Watch Now: Who should get a booster shot?

Watch Now: Who should get a booster shot?

Watch now: An inside look at the USS Arizona Relics Program and its history

Watch now: An inside look at the USS Arizona Relics Program and its history

Efren Aguirre, left, smiles in March 2016 after hitting a $12.5 million jackpot at Gold Dust West in Elko. His wife, Maria, and son, Efren Aguirre Jr. stand with him for a photo.

Efren Aguirre, middle, poses with his wife Maria and their son Noel Thursday at the Elko Daily Free Press.