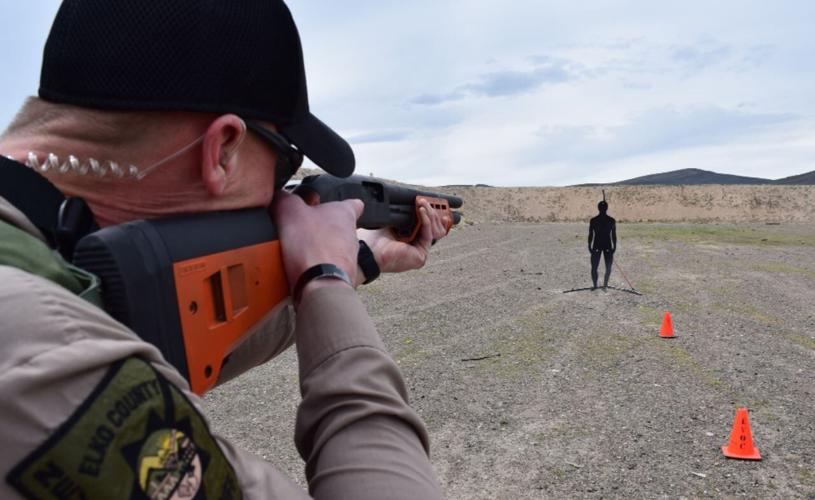 Elko County Sheriff's Office personnel have been practicing with "less lethal" ammo fired from shotguns as a way to safely end confrontations with suspects. 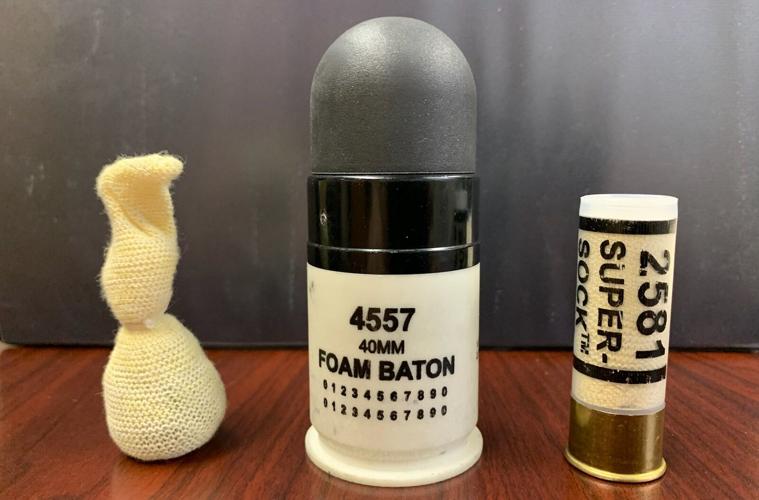 Less lethal ammunition now being used by the Elko County Sheriff's Office includes, from left: a 12-gauge bean bag round, 40 mm foam baton, and a 12-guage "Super Sock" in the shell.

ELKO — The Elko County Sheriff’s Office has new weapons in its arsenal, and they are designed to end confrontations without the loss of life.

“The purpose of a less lethal program is to temporarily incapacitate persons who present a clear danger to the safety of the public, officers, or themselves,” stated the sheriff’s office.

The beanbag ammo was used last month to subdue a Spring Creek man who fired five shots inside a home and refused to be taken into custody after deputies arrived. They couldn’t determine if he was still armed, so they fired less lethal rounds at him.

The man was safely arrested on charges of discharging a gun inside a structure, possessing a gun by a prohibited person, and four felony counts of child endangerment.

In the past, the Sheriff’s Office has used Tasers, pepper (oleoresin capsicum) spray, and batons as less lethal options. “These tools can be effective but are limited to getting into a ‘danger zone’ where, if they are ineffective, the suspect can attack the officer, forcing a situation where the level of response can quickly turn lethal for the officer or the suspect,” stated the sheriff’s office. Sheriff Aitor Narvaiza last year filed budget requests to start the less lethal program.

“Deputies have now been provided an option where less lethal force can be used at longer range, helping to reduce the chances of lethal force being necessary,” stated the sheriff’s office.

Each deputy is issued a less lethal shotgun that fires beanbag ammo from a 12-gauge shell. One 40mm foam baton launcher will also be available on each shift.

Although the department’s shotguns have all been converted into less lethal, each deputy is also issued a patrol rifle with regular ammunition as well.

The new weapons are being employed across the country as a way to avoid deadly encounters involving law enforcement, but they are not without controversy. The Los Angeles Times reported on eight incidents in which they were used by officers at the same time other officers fired conventional weapons.

According to international manufacturer Combined Systems Inc., the 40mm baton launchers can be used for crowd control. They say the projectiles are “extremely accurate” but several factors such as environmental conditions and the operator can affect accuracy. The company cautions that “Shots to the head, neck, thorax, heart, or spine can result in fatal or serious injury.”

The 12-gauge “Super Sock” beanbag projectiles are also made by Combined Systems. They are designed “to gain compliance, disperse crowds, restore order, or temporarily incapacitate dangerous persons.” They also come with a warning that improper use can result in death.

Last week, a Texas man armed with a knife was killed by police using beanbag ammunition after a stun gun failed to subdue him. It took two less lethal shots before he dropped the knife and began to comply with officers, but he later died at a hospital, NBC in Dallas-Fort Worth reported.

Elko County’s deputies have been training on how to use the new force options, along with the appropriate situations in which to deploy them.

“The goal of the Sheriff’s Office with these new programs is to provide advanced training and response options to the deputies, while simultaneously increasing public safety by providing well trained deputies to respond to the citizens of Elko County,” stated the sheriff’s office.

On Monday, the family of 16-year-old Britney recalled how their lives changed after the death of their daughter and sister.

Troy B. Duncan, 33, of Spring Creek was arrested May 15, 2022, at Lamoille Highway and Metzler Road for felony driving under the influence. Ba…

H2Go Watersports to be closed for season

Man imprisoned on drug charges to be released

ELKO – A man imprisoned after police said they found heroin, cocaine and methamphetamine in his vehicle is scheduled to be paroled in July.

Department 1 Judge Kriston HillMay 10Javier Madriz, 35, pleaded guilty to conspiracy to commit possession of a controlled substance and was se…

ELKO – A Halleck man who was sentenced in January 2021 to up to five years in prison has been granted parole.

Elko County Sheriff's Office personnel have been practicing with "less lethal" ammo fired from shotguns as a way to safely end confrontations with suspects.

Less lethal ammunition now being used by the Elko County Sheriff's Office includes, from left: a 12-gauge bean bag round, 40 mm foam baton, and a 12-guage "Super Sock" in the shell.