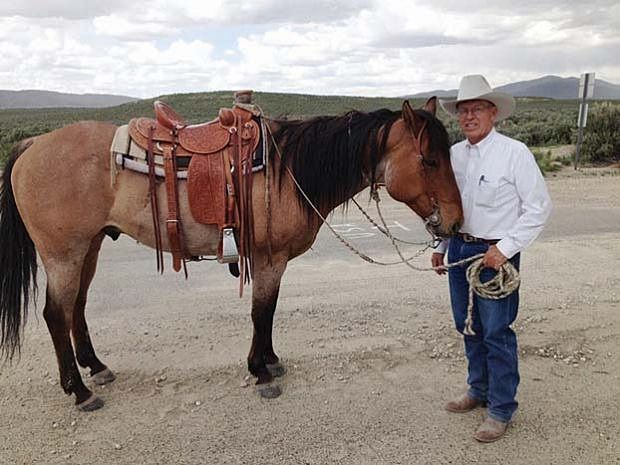 Grant Gerber prepares for the first Grass March, to Carson City, at the end of May. 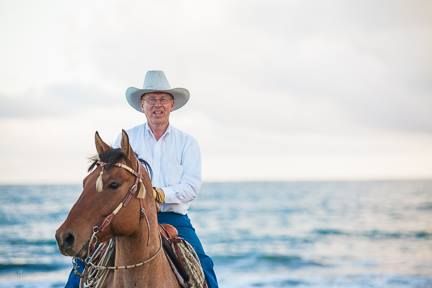 Gerber rides in the Pacific surf at Bodega Bay, California, at the start of the coast-to-coast ride on Sept. 26. 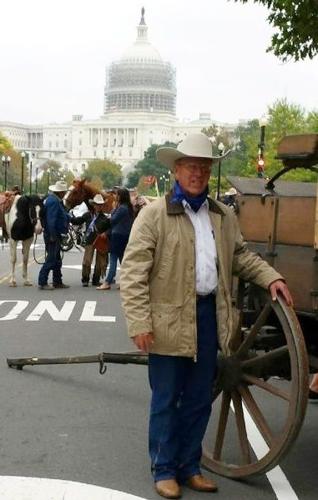 Gerber poses by a wagon as the Grass March reached Washington, D.C., on Oct. 16. 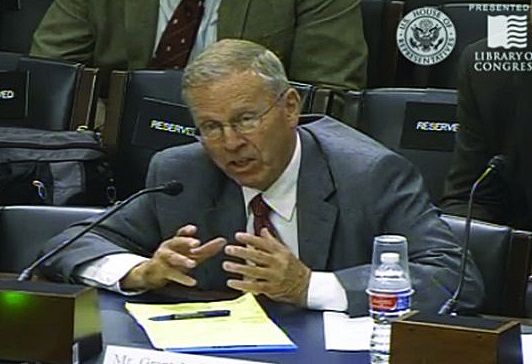 ELKO – Grant Gerber, an Elko native who grew up cowboying the county’s ranges, died Saturday at age 72 in a Salt Lake City hospital surrounded by loved ones.

He was remembered for dedicating his life to fighting for local rights against federal encroachment.

A funeral is planned for Friday, which is Nevada Day.

On Oct. 7, while riding coast to coast carrying petitions to Washington, D.C., Gerber’s horse, Gandhi, stumbled on a prairie dog hole in Kansas, taking Gerber down with it. He was knocked unconscious.

Gerber was one of many riders in the Grass March/Cowboy Express, a cause that started as an effort to protect the livelihood of Lander County ranch families who were ordered to remove their cattle from the drought-stricken range, on which they owned about half of the land and all of the water rights.

The movement blossomed to include redress for many controversial land policies and wildlife concerns due to federal management.

After the fall, Gerber said he was glad he was the one who took the tumble and not a fellow rider, according to his son, Travis Gerber, who rode alongside his father.

“He was examined and released from a St. Louis hospital with no sign of bleeding,” Travis Gerber said Thursday.

The group continued on their journey, and made it to the Capitol on horseback Oct. 16.

After the petitions were delivered, Gerber had nagging headaches and checked into a hospital in Cheyenne, Wyoming on the way home, where doctors discovered internal bleeding.

Gerber was an Elko County commissioner and longtime local attorney. He was known as a man who turned ideas into action.

He was the driving force behind the Grass March/Cowboy Express movement, which started with a ride from Elko to Carson City last spring.

Longtime friend Demar Dahl said he spoke with Gerber after the Grass March made it to the Governor’s Mansion.

“He said he felt so good when he rode in there,” Dahl said. “He and I used to joke with each other a lot and banter. I said, ‘What are you going to do next, ride to Washington?’ The next day he called and said, ‘We’re going to go to Washington, go from sea to shining sea.’ And of course he got it done.”

From the Pacific to the Atlantic, the Grass March gained media attention.

Gerber was also a main organizer in the county’s pilot sage grouse conservation program, which focuses on chick rearing through predator control and protecting habitat from wildfires with targeted grazing of dry fuel.

It was Gerber who suggested the county prominently display a sage grouse habitat map in the back of its meeting room to illustrate to residents how much of the county would be affected by a sage grouse Endangered Species Act listing.

He saw the looming sage grouse decision to be one of the greatest threats to the county’s economic interests, and likened it to the spotted owl of the Northwest.

He also was involved in the creation of the Jarbidge Shovel Brigade. After a storm in the 1990s washed out a road in a northern Elko County forest, residents cleared the road so it could be used, against the U.S. Forest Service’s directive.

“Grant was really the power behind all of that,” Dahl said.

Former Assemblyman John Carpenter said he and Gerber became close friends while working together on the Shovel Brigade. He remembered Gerber advocating for the citizens’ right to assemble.

“Grant was leading the charge, (saying to a judge on a conference call) ‘You can’t stop people from demonstrating on public property,’” Carpenter said.

Out of law school, Gerber began to worry that too much land was being designated as wilderness, thereby restricting access and resources.

As a response, he organized the Wilderness Research Impact Foundation.

“He worked so hard and spent so much time on it,” Dahl said. “He just devoted his life to that for so long that it about broke him.”

Through the Smoked Bear campaign, he drew attention for the first time to the deaths of countless animals and massive tonnage of pollution caused by wildfires. Allowing cattle and sheep to graze dry fuel could save critters from fire and improve air quality, Gerber would say.

Gerber, a history buff, often quoted from the journals of Peter Skene Ogden, and contrasted the desolate landscape early explorers encountered to the habitable place it became due to the toil and stewardship of early ranch settlers.

At a young age, he helped his family run a hunting camp in the Ruby Mountains.

When Gerber ran for office in 2012, he said his primary focus was to fight to maintain the freedoms of Elko County citizens.

Gerber dedicated his life to service, his son wrote in an email.

He served on the Great Basin College Foundation’s planned giving committee and the Northeastern Nevada Museum Board; he worked pro bono for a number of nonprofit organizations, such as the SnoBowl and the animal shelter.

Awarded the bronze star for his valor in the Vietnam War, Gerber rose to the rank of captain of a Special Forces mountain climbing and ski team. He served on the VFW Honor Guard.

Gerber and his wife, Lenore, served a humanitarian mission in Egypt for their church.

“When they went to Egypt, I prayed every day that they would come back safely, which they did,” Carpenter said.

“Lenore and I … helped our six children graduate from Elko and Spring Creek high schools,” he stated in 2012. “I started businesses and a law firm in Elko, and dedicated time to preserving Elko County’s Constitutional traditions.”

ELKO – In remembrance of Grant Gerber, the Catholic community has scheduled a prayer and rosary service 7 p.m. Thursday at Burns Funeral Home.

ELKO – Before his death, Grant Gerber set his sights on Washington, D.C., when he and a group of riders carried petitions from California to t…

ELKO – As of Friday afternoon, six residents had applied to fill a vacancy on the Elko County Commission, left by the untimely death of Grant Gerber.

Applicant count for commission vacancy up to 10

ELKO – Fourteen applicants are vying for an open seat on the Elko County Commission.

ELKO – Two of the 14 applicants to fill a county commission vacancy have removed their names as potential fillers.

Commission to swear in new members

ELKO – The build up to the Grass March/Cowboy Express ride focused on the protest. And the conclusion of the coast-to-coast horse ride centere…

China's protests over lockdowns spread to campuses and communities abroad

China's protests over lockdowns spread to campuses and communities abroad

Grant Gerber prepares for the first Grass March, to Carson City, at the end of May.

Gerber rides in the Pacific surf at Bodega Bay, California, at the start of the coast-to-coast ride on Sept. 26.

Gerber poses by a wagon as the Grass March reached Washington, D.C., on Oct. 16.