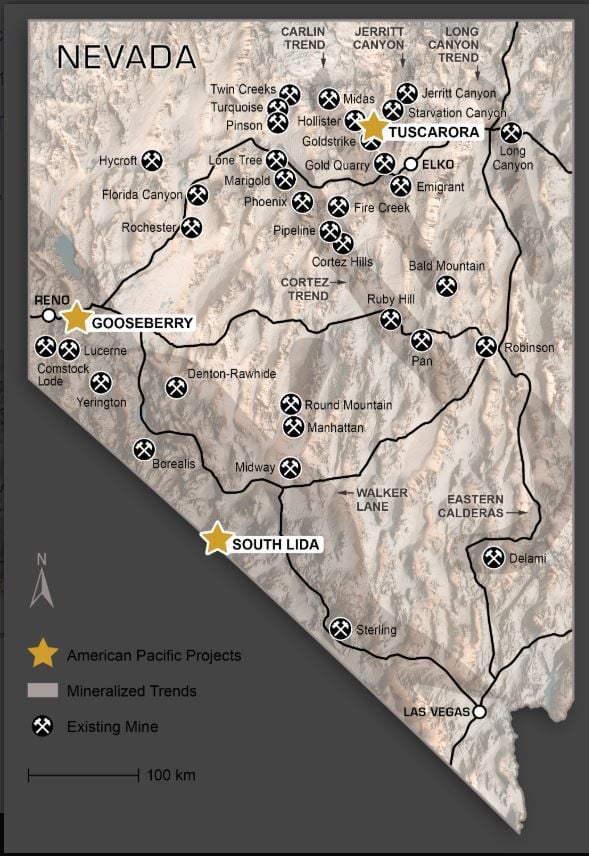 VANCOUVER, BC — American Pacific Mining Corp provided an update this week on the Gooseberry Gold Silver Project in the Ramsey Mining District of Storey County, east of Reno.

The property, 42 unpatented claims over approximately 708 acres, was staked by APM in April 2019 and was followed up by a sampling program in June. The project has been developed vertically to 1450 feet from surface, with underground development across seven of ten levels.

Sporadic mining took place at the Gooseberry Mine from 1906 to 1991.

Eric Saderholm, APM president and director, said, “We are pleased with the progress of the Gooseberry 3D model, indicating that historic grades were quite robust during the mine’s productive years. Gooseberry hasn’t been in production for almost 30 years and this data shows the high exploration potential for APM to expand upon the known mineralized zones.”

APM has compiled historic underground stope maps from the mid-1980s by the previous mine operator, Asamera Minerals Inc.

APM said the Ramsey Mining District is surrounded some of the most famous and prolific mining districts in Nevada, including the Comstock Mining District, which is 26 miles west of Gooseberry.

The Gooseberry Project consists of nearly vertical quartz-dolomite veins that range from a few inches up to 10 feet in width based upon historical records. The veins follow an east-west structural zone and can be traced for several hundred feet at the surface. Mineralization is hosted in numerous veins present in the vicinity of the mine with occasional areas of considerable jarosite, gypsum, and disseminated pyrite.

The property contains gold-silver bearing vein structures characterized as low-sulfidation epithermal style mineralization, typified by banded to cockade quartz textures and the presence of adularia and kaolinite. On the basis of the data compiled by APM, new targets for exploration on the property have been identified.

APM also has the Tuscarora project in Elko County, about 22 miles northeast of the Carlin Trend, and the South Lida project in south central Esmeralda County.

End of the rainbow III: The search for more gold deposits is on

End of the rainbow I: The future of gold mining in Nevada