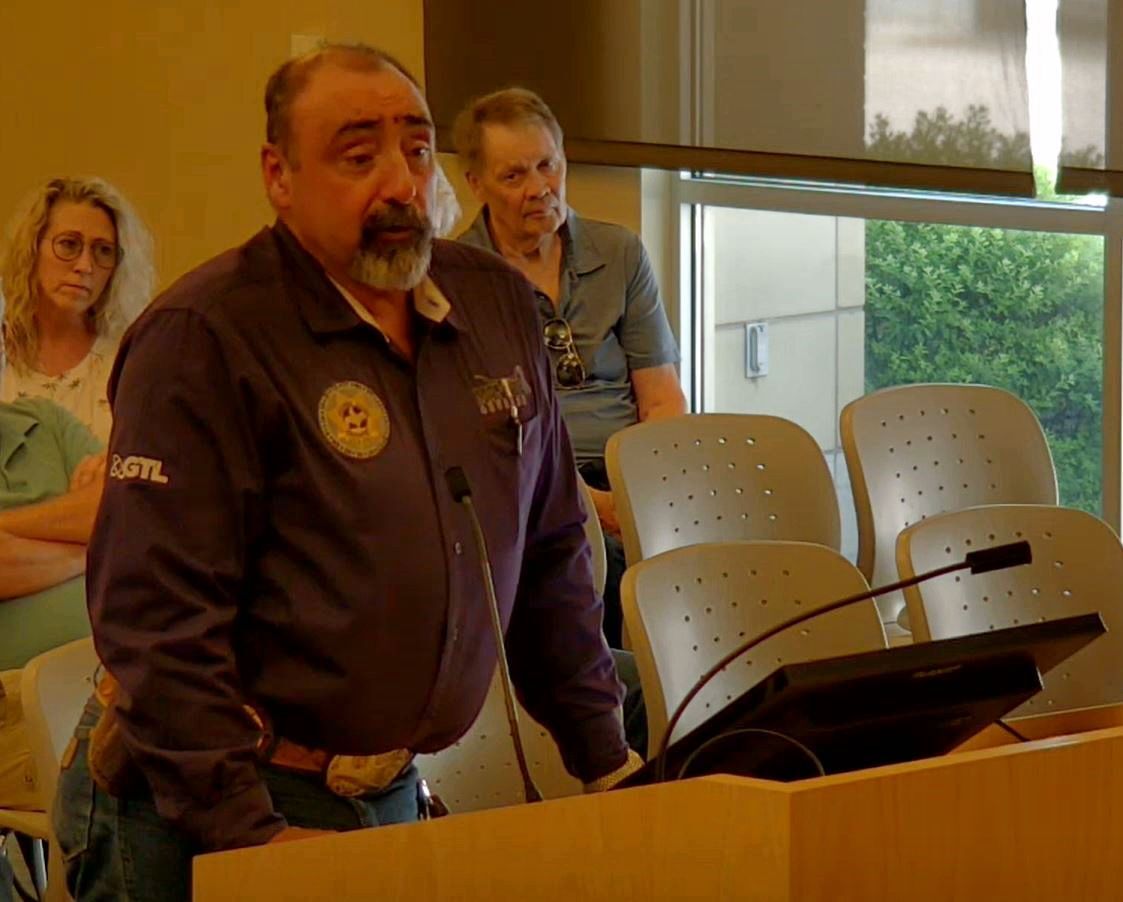 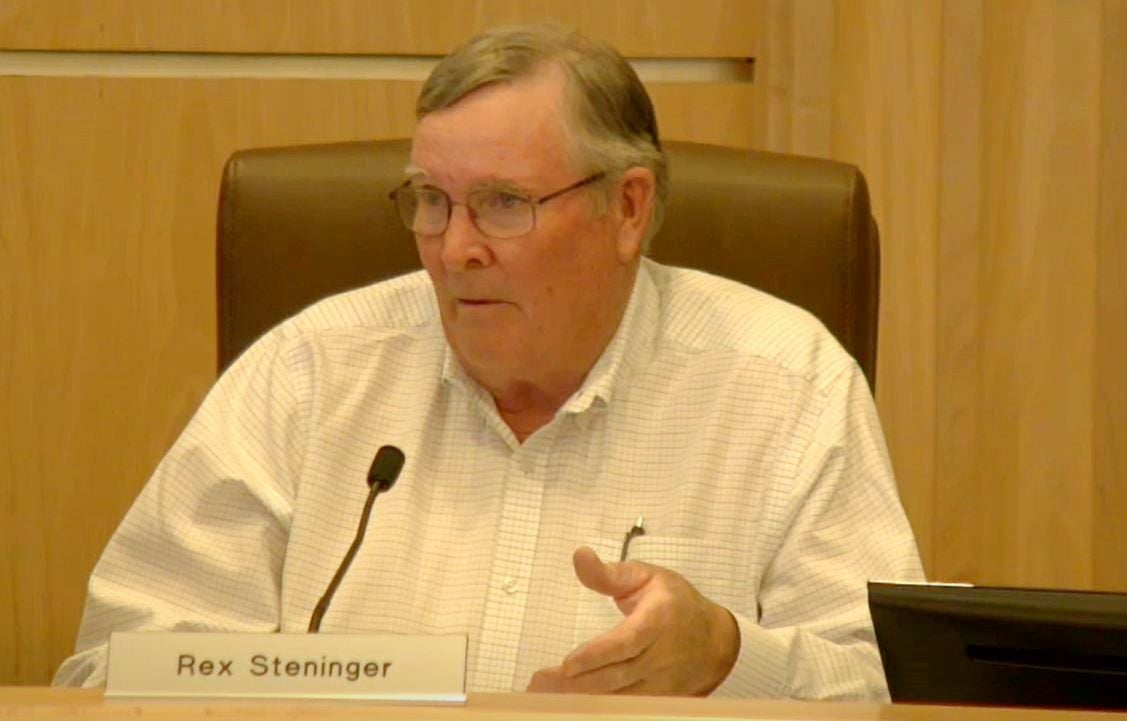 ELKO – Elko County Commissioners have passed a resolution to join the Constitutional Sheriffs and Peace Officers Association following in the footsteps of Lander County, and commissioners have agreed to set up a fund to pay for a patriotic rally in Elko on June 20.

Their votes met with applause at Wednesday’s meeting, and several from the audience handed donations to Commissioner Rex Steninger during the meeting, including Elko County Sheriff Aitor Narvaiza, who said “it is very rewarding, very uplifting to have this resolution.”

He said that “it makes my job so much easier as the sheriff of Elko County to have the support of the commissioners.”

Eureka County Sheriff Jesse Watts said he was “proud to stand shoulder to shoulder with Aitor Narvaiza,” and he thanked commissioners for stepping up.

Lander County held a gathering in mid-May that spurred Steninger to propose the resolution to join the association that promotes the U.S. Constitution and local government authority, and he thanked “our Lander County neighbors. They got this ball started.”

Lander County was the first county in the nation to join the association.

Steninger told commissioners that “historically all the great societies have floundered and died after about 240 years, and that’s where we are about now. We have to do something, and this is one small step in that direction.”

“The pandemic brought to mind how far we’ve sunk in the nation,” he said, citing Gov. Steve Sisolak’s orders closing businesses and churches when the COVID-19 pandemic began.

Commissioner Cliff Eklund said that “Rex is absolutely right,” commenting that the sheriffs of Elko, Eureka and Lander counties refused to enforce regulations that the state was “trying to shove down our throats,” and they deserve the county’s support.

The commissioners voted unanimously to join the association and create the fund, and there were no negative comments from them or from the audience, but the Lander rally received national attention from The Daily Beast, a New York publication. The Daily Beast described CSPOCA as a far-right law enforcement group.

Lander County Manager Bartolo “Bert” Ramos said there is “nothing more to the center of politics than the Constitution. It stood for 240 years. Why do we want to rewrite it?”

He also said Lander County has had an outpouring of support since the May rally in Battle Mountain.

At the June 2 meeting, Debbie Pawelek spoke from the audience, saying that “this is not about political parties. This is about the right to choose.”

The county’s resolution states that the county commission resolves that “any federal officer, agent or employee, regardless of supposed congressional authorization, is required to obey and observe limitations consisting of the enumerated powers as detailed within Article 1 Section 8 of the U.S. Constitution and Bill of Rights.”

The resolution also states that “the people of the United States are, and have the right to be, free and independent” and the “powers not delegated to the United States by the Constitution, nor prohibited by states, are reserved to the states respectively, or to the people.”

Additionally, the county resolution states that a list of abuses “will not be allowed or tolerated within Elko County.”

The document also prohibits continued incarcerations without charges and due process, domestic utilization of the nation’s military or federal agencies operating under power granted under the “laws of war’ against American citizens and arresting citizens or seizure of property without first notifying and obtaining the consent of the local sheriff.

CSPOA was founded by Richard Mack, a former sheriff in Arizona, who says in a video on the organization’s website that “sheriffs are now starting to get it.”

Steninger said Thursday he told Mack, who was at the Battle Mountain gathering and is expected at the Elko event, that he thought “we could get all but two of Nevada’s 17 counties to join the association.”

He wrote to county commissioners throughout Nevada urging them to join the association for a lifetime membership of $2,500, and he said on Thursday that county staff will send copies of Elko County’s resolution to commissioners around the state.

Elko County District Attorney Tyler Ingram said in a letter of support for the joining the CSPOA that when he took office, “I swore to uphold the Constitution of the United States and the State of Nevada. The resolution to join the Constitutional Sheriffs and Peace Officers Association is largely a recitation of legal principles that we strive every day to uphold.”

The June 20 rally will be at 4 p.m. at Elko City Park and the estimated cost is $12,500, according to Steninger, who said in an email Thursday that the county collected $1,200 at the commissioners’ meeting and he had a $500 pledge later Wednesday.

“That’s pretty impressive and a sign our residents are eager for this,” he said.

School board meeting cancelled in response to threats of violence

ELKO – Another school board meeting has been canceled, this time about three hours before it started due to threats toward board members.

ELKO – People could fish, picnic, hike and learn about nature at a pond project that is in the budding stage now with the Nevada Department of…

ELKO – A Wells-area parent announced he would take his unmasked children to school Tuesday in protest of Gov. Steve Sisolak’s mask mandate, th…

WATCH NOW: School board meeting halted when some parents refuse to wear mask

ELKO – Beginning on Christmas Elko’s fire chief will be Jack Snyder, the current deputy chief under Matt Griego, who is retiring on Dec. 24 af…

Gurr to run for Assembly district in northeastern Nevada

“People know it’s now or never. If we don’t step up now, there will be no state. There will be country to save.”

ELKO – Elko Fire Department will be receiving a ladder truck to replace its 1990 model, but the truck will be used rather than new like the de…