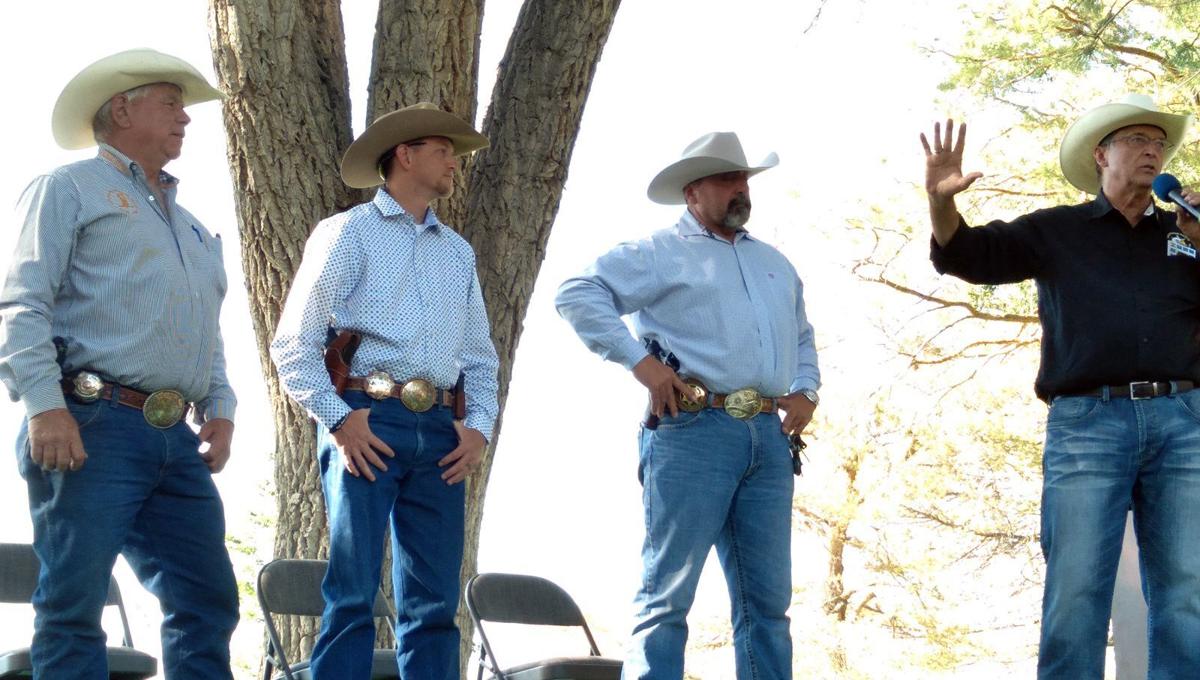 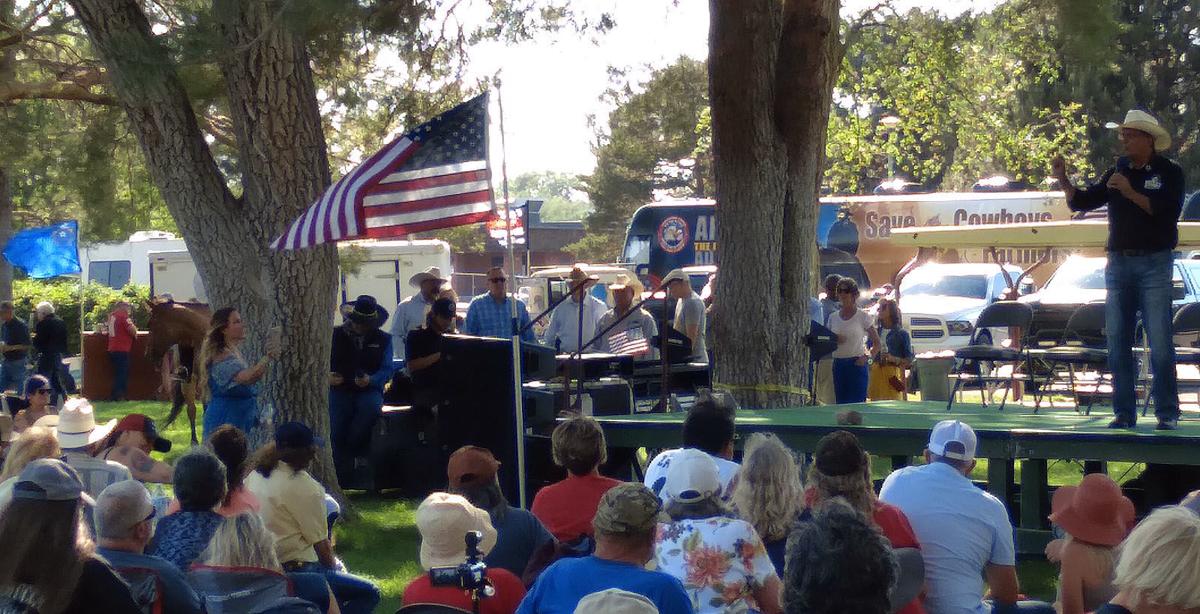 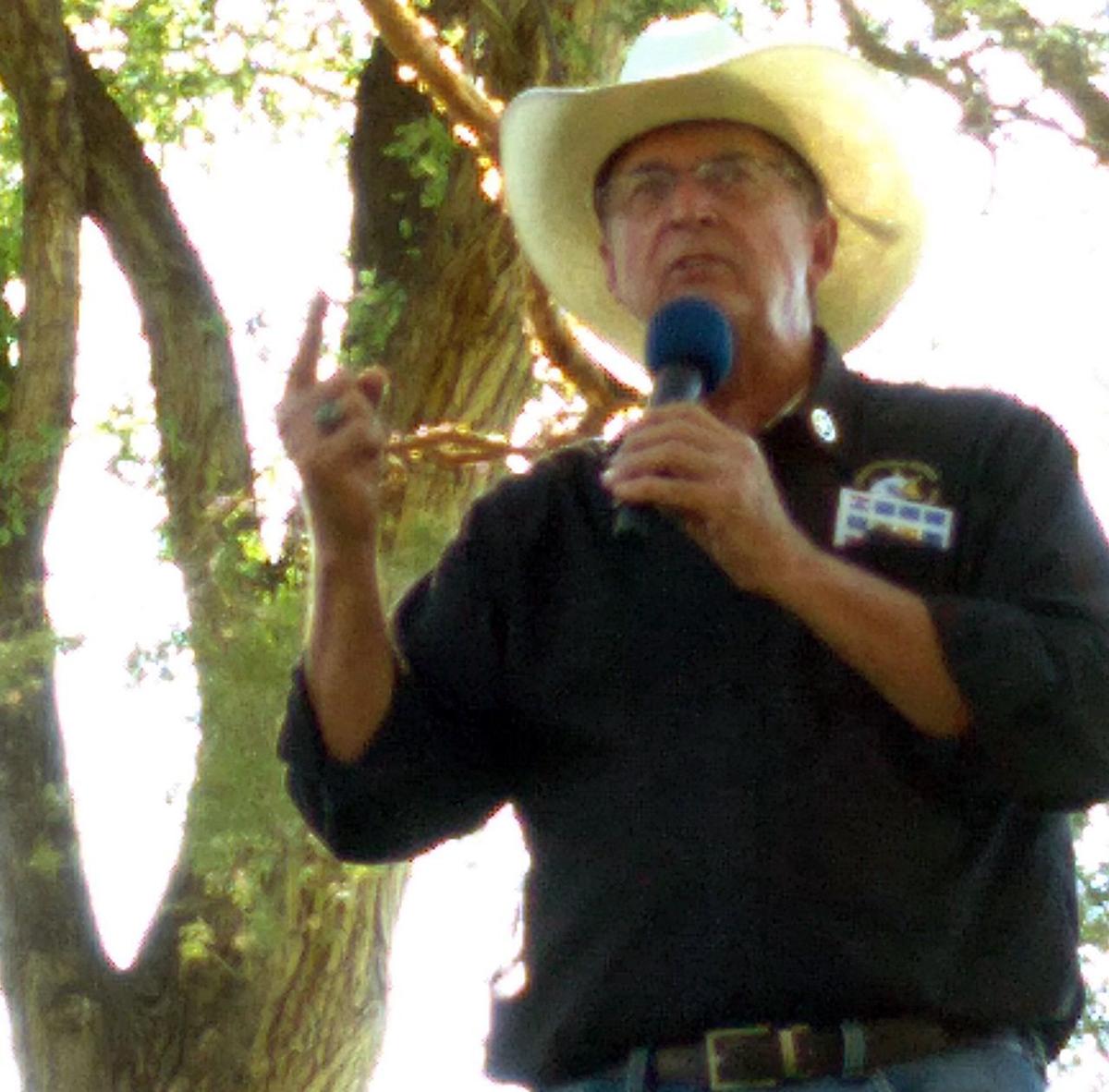 ELKO – Northeastern Nevada sheriffs were recognized Sunday for their special role in government, as a crowd of a few hundred people gathered in Elko City Park to celebrate Elko County becoming part of a “constitutional sheriff” organization.

Constitutional Sheriffs and Peace Officers Association founder Richard Mack was the main speaker at the event. The group says “law enforcement powers held by the sheriff supersede those of any agent, officer, elected official or employee from any level of government when in the jurisdiction of the county.”

Lander County Manager Bartolo “Bert” Ramos emceed the event, which was also expected to feature Joey Gilbert, a former professional boxer from Reno who plans to run for governor as a Republican. Ramos said Gilbert was unable to attend due to a family obligation.

Dressed in Minuteman garb and sitting on a horse that traveled to Washington, D.C., for the Grass March in support of ranchers, Elko attorney Travis Gerber held a 13-star flag and asked the crowd if they knew how many democracies existed in the world in 1776.

“There were zero democracies,” he said. “And today, because of this flag and what it stands for, most of the world is free.”

“The Grant Gerber of the day is a guy who had a vision to put a bunch of people – a motley crew of people — in a group of buses and come to the people,” Ramos said.

“The National Security Agency has every single email, cell call, text, game chat and banking transaction for every traitor, every elite pedophile and every Wall Street criminal and every corrupt government official at the local, state and federal levels,” he said to applause from the crowd. “And I remind you that no army of lawyers are going to be able to stand up to an Army Ranger battalion with fixed bayonets. We’re coming.”

“I will tell you with absolute certainty that the thing that Nancy Pelosi and Adam Schiff fear most is not jail, but us releasing their 10 most treasonous phone calls to their own public,” he continued. “They will be torn limb from limb on their own streets.”

Mack, a former sheriff who successfully sued the United States over background check provisions in the Brady Handgun Violence Prevention Act, condemned racism and the Internal Revenue Service during his speech.

“White Supremacy has no place in a free society,” he told the crowd. “There is no exception. You cannot say ‘freedom for me but not for thee.”

Mack called the IRS “the most criminal organization in American history – the Gestapo of America.”

Instead of increasing the agency’s funding like President Biden has proposed, Mack said “You know what I train sheriffs to do? Kick ‘em the hell out of your county.”

Mack called the sheriffs of Lander, Eureka and Elko counties on stage and gave them each a chance to speak.

“Sheriff Mack said here just a minute ago that we’re gonna take some heat,” Narvaiza said. “Well, ladies and gentlemen, I’ve already been taking some heat but I don’t really care. I fight for you guys, I fight for the people of Elko County and the people who elected me to fight for them.”

Eureka County Sheriff Jesse Watts told the audience he would repeat a comment he made at Lander County’s recent rally that “went viral on TikTok and Facebook.”

Lander County Sheriff Ron Unger thanked Elko County for following Lander’s lead, when it became the first county in the nation to join the association. “We’re here for your freedom,” he said.

Mack then called Elko County Commissioners on stage and presented them with a plaque recognizing their membership in the CSPOA.

“Our motto: serve, protect, uphold, defend,” he said, later adding faith, family and freedom. “Freedom is the sheer possession of those alone who have the courage to defend it,” he said, quoting the Greek statesman Pericles.

“It is such an honor for me to be a part of such a celebration today,” he concluded.

In a unanimous vote earlier this month, commissioners resolved that Elko County will not tolerate any abuses to the rights of citizens as outlined in the Bill of Rights.

The move by Lander and Elko counties has not drawn mainstream media attention but it was reported by ntd.com, which interviewed Mack online. NTD describes itself as a New York-based, global television network founded in 2001 by Chinese-Americans who fled communism.

Mack’s interpretation of the authority of sheriffs has been criticized by groups such as the Center for Public Integrity, which quoted a professor of constitutional law saying it conflicts with the U.S. Constitution’s supremacy clause.

A 2017 article at politico.com states that “Nowhere did the framers explicitly authorize local government officials and lawmen to act as final authorities on the Constitution’s meaning.”

"Go get your shots." Unnvaccinated COVID patient talks about his illness