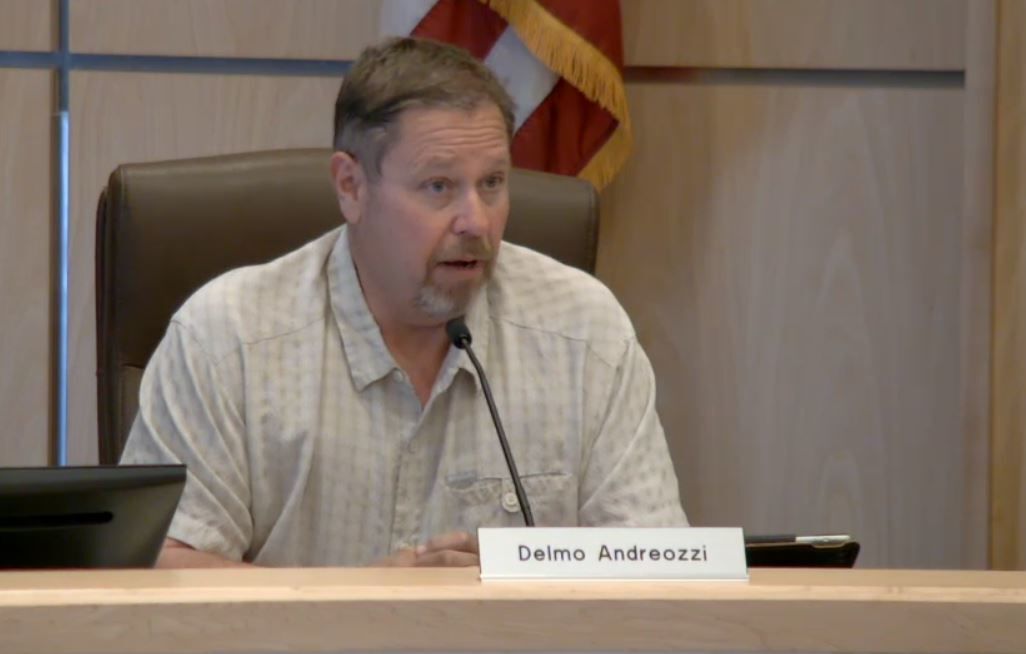 Elko County Commissioner Delmo Andreozzi speaks during the Board of Commissioners meeting on May 5. 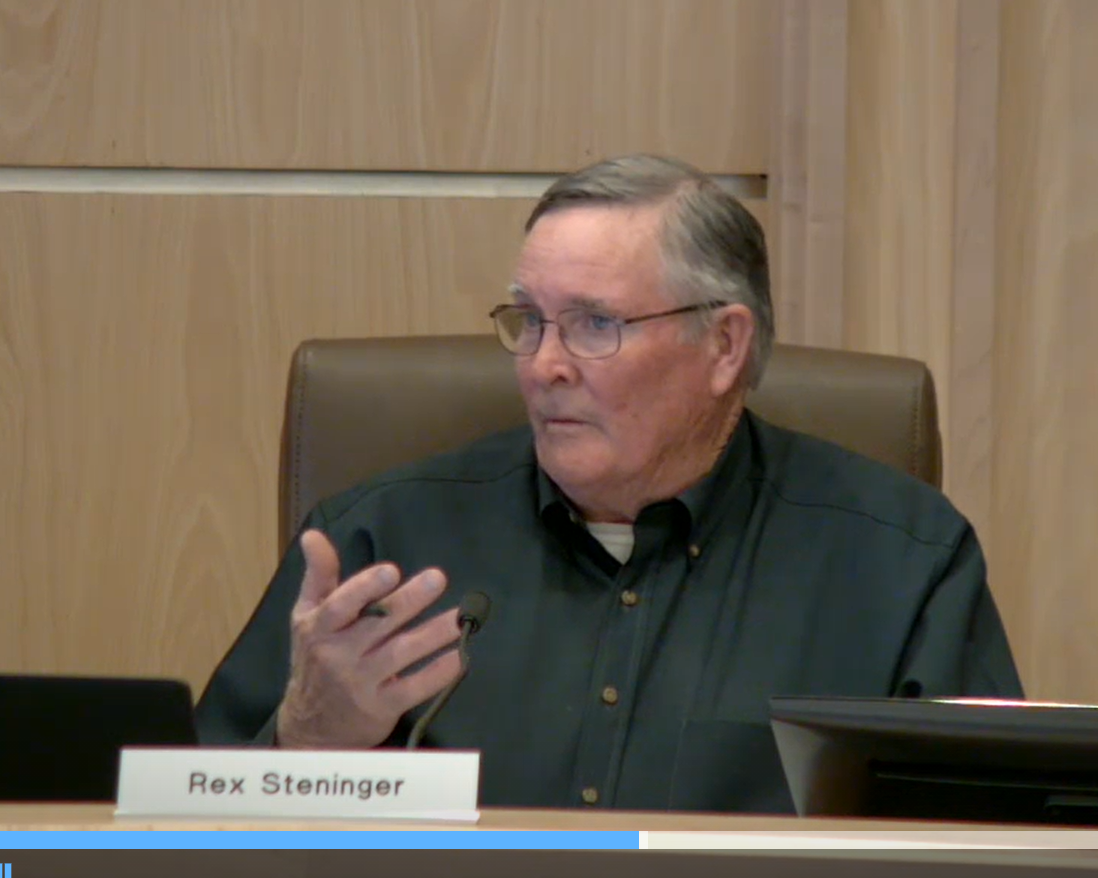 Elko County Commissioner Rex Steninger speaks during the Board of Commissioners meeting on May 5.

ELKO – Elko County Commissioners narrowly passed a motion to back a possible congressional earmark to fund a housing development in Spring Creek.

Commissioners voted 3-2 this week on a motion to lend Elko County’s name to the multi-million dollar project, contingent on the county being released from all risk exposure, financial or otherwise. The funding has not yet been approved by Congress.

The goal of the earmark request was to have the developers “take a seat at the table” if the bill is passed, according to representatives for Ruby Vista Ranch.

“In order to start the conversation with our senators, in order to take a seat at the table, we have to have a public partner,” said Stephanie Walker of Porter Group Government and Business Solutions. “We’re here asking Elko County to lend their name to the project, but nothing else.”

The bill proposes each senator receives an earmark – spending to be directed to a specific project without being assigned by a federal agency – which has not been done in 10 years. “Each member gets a certain amount of funding that they are able to request for an earmark,” Walker said.

Although the bill could take several months to pass out of Congress, requests for earmarks opened this week, Walker said, adding that Elko County’s support would give Ruby Vista Ranch “the ability to compete [for the funds].”

The goal is “to have the opportunity to ask to maybe get into that bill when it comes out in the future,” Walker explained.

She and Doug Flowers from Holland & Hart appeared before the Commissioners via a Zoom call.

Fourteen years ago, the Ruby Vista Ranch announced plans for a subdivision on more than 1,400 acres of land along Lamoille Highway across from Boyd-Kennedy Road. Last summer, Commissioners approved a tentative map for the development.

Developers with Ruby Vista Ranch LLC are seeking $18 million through the earmark to fund the first phase of the development. It includes 420 single-family homes, 320 apartments, and 135 acres for commercial and light industrial use, according to the Surface Project Authorization Request that lists Elko County as the requesting agency.

“No matter what happens, there’s going to be a certain amount of funding that comes to Nevada, and we would like for that to come to this project in Spring Creek in Elko County,” Walker said.

ELKO – Could a new roundabout appear on Lamoille Highway by the end of the year?

Commissioners debated for about an hour, with Delmo Andreozzi and Cliff Eklund ultimately voting against the motion. Eklund questioned the financial responsibility Elko County might face, while Andreozzi wondered whether such a subsidy might create an uneven playing field for developers.

Andreozzi explained that while he supports property rights and a property owner’s right to develop their land, the request to support a federal subsidy for Ruby Vista Ranch has too many unknown factors.

“If we sponsor that, what does it mean? Do we have grant assurances that we have to make? Do we have to administer it? Do we have any upfront money? None of that is answered,” Andreozzi said.

Another problem was that the project “is very centralized. It only benefits one area,” he continued. Andreozzi suggested that developing the Errecart Boulevard loop road would be more beneficial to the community as a whole, particularly for Spring Creek area residents who commute to Elko during the week.

“If [the earmark] benefited a bunch of different people, I would feel a little bit differently and not knowing what we are getting ourselves into without seeing that, I have a hard time putting my name alongside it,” Andreozzi said.

“I don’t have anything against them,” he said.

SPRING CREEK – Is another residential development on its way to Spring Creek?

Commissioner Rex Steninger said he held an opposing view to Andreozzi’s, pointing out that the Commissioners have set precedence by sponsoring many grants for various local entities.

“We’ve approved grant requests for the Boys & Girls Club, the library and Wells,” Steninger said. Grants “are a fact of life now. I don’t like the idea either, but that’s the way our world is created. The federal government takes our money, and we have to apply for grants, and if they’re in a good mood, they give some of it back to us.”

“We’ve already approved a tentative map for this,” Steninger continued. “What they’re asking today is that we approve their bid for a federal grant. That’s all we’re involved in today.”

The Commissioners’ role was not to answer the developer’s questions, Steninger said, but to ensure that the “development follows all the rules, laws and codes. I think they’ve gone beyond that level.”

Cash Minor, Elko County’s assistant manager, said it was possible “that this money should not be used to benefit private sector business.”

“So I’m concerned if we move forward with this, whether that’s a true statement in the literature I read regarding earmarks,” Minor said. “You may be sitting here with $18 million that you don’t have the ability to process onto the private sector.”

Steninger said the motion could include an indemnification clause to protect the County against expenses and liabilities.

Doug Flowers told the board the developers would work with Elko County Deputy District Attorney Rand Greenburg to write an indemnification clause and provide insurance coverage to protect the County from liability.

ELKO – Home sales are lively in Elko and Spring Creek despite the COVID-19 pandemic, partly because gold mines stayed in production, keeping m…

“Our goal is to stay flexible, keep you informed, keep you indemnified and free of all risk and liability throughout,” Flowers said.

“The benefits to Elko County are endless,” Brough said, noting that jobs would come in along with tax revenue. “Somebody is going to get that $18 million. Why not let it come to Elko County?”

Realtor Bert Gurr, who was involved in the development of Spring Creek in the 1970s, questioned the impact of the subsidy on the local economy and real estate market.

He asked the Commissioners to delay their vote until they learned more about the development.

Steninger said if there were doubts about the earmark’s requirements or the development in the next six to eight months, the County had the power to back out. “This is not a final commitment.”

The Commissioners could also stipulate the developers use local builders and contractors for the development, he added.

Steninger said the development “is coming one way or another” and the $18 million would come back to the County through gas tax, property tax and sales tax revenue.

According to Flowers, the development may not go forward without the earmark to support it in the first phase.

“I can tell you that if the grant doesn’t go forward in the next year or so on that timeline, that this project as currently envisioned won’t happen because it doesn’t pencil without that outside support unless costs just radically fall,” he said. “The project can’t happen without the subsidy in that ballpark. It doesn’t have to be the full $18 million, but if it’s not near there, then probably this project really has a hard time making sense financially.”

Board chair Jon Karr broke the tie with a vote to approve the request, saying he “disagreed” with federal handouts but that he had received federal funding for his business and was not opposed to Ruby Vista Ranch vying for the earmark.

But the chance of the earmark reaching Elko County remains in doubt.

“How likely is it that a Nevada senator is going to approve an Elko County project when the votes are in Clark County?” Steninger asked.

Karr agreed and voiced his doubts that the earmark will make it through Congress and into Elko County.

“I honestly don’t believe we’ll get any of this, is my personal opinion.”

Developers hope their multi-million dollar subdivision could solve the housing shortage in the area.

Elko County Commissioner Delmo Andreozzi speaks during the Board of Commissioners meeting on May 5.

Elko County Commissioner Rex Steninger speaks during the Board of Commissioners meeting on May 5.