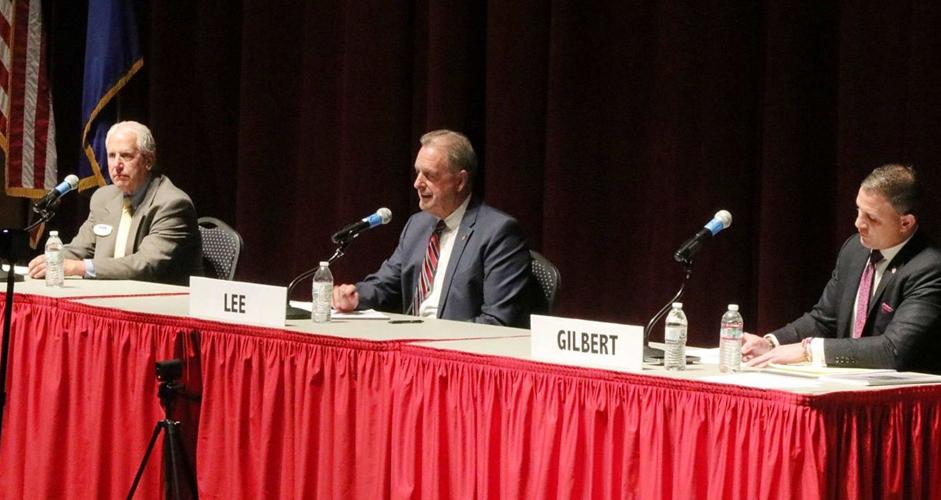 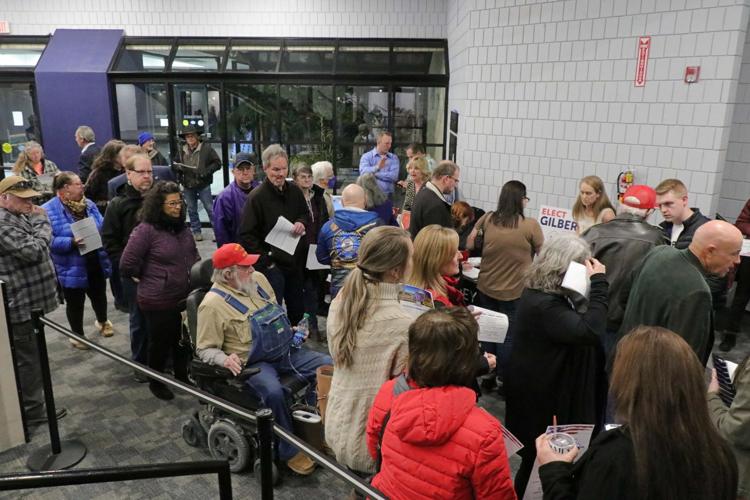 About 200 people entered the Elko Convention Center auditorium for a debate on Jan. 21, 2022.

ELKO – Three Republican candidates for governor met Friday night in Elko for a primary debate that saw very little difference of opinion between them.

Two of the moderators who questioned the candidates were resigned school board members and two were parents who criticized the board over mask requirements last fall. The fifth was Danny Story, whose Battle Born Media Networks broadcast the debate over Facebook.

Debate organizer Paul White billed the event as “The first governor candidates’ debate ever held in a rural county since Nevada Statehood in 1864.” He introduced Elko County Republican Party Chairman Lee Hoffman, who told the crowd that it was not a Republican Party event.

Chief moderator and Parents of Elko County co-founder Misty Atkins asked the candidates what they would do to guarantee access to “life-saving” early intervention treatments hydroxychloroquine and ivermectin.

Simon, who called himself a “COVID expert,” said the drugs are safe and inexpensive, and if he is elected “on day one there will be therapeutics available to Nevadans, over the counter.”

“There is an evil connection now we’ve been through Obamacare, between the government and hospitals,” he said, adding, “You cannot trust your hospitals.”

Simon told the crowd he has lost privileges at multiple hospitals and he is not vaccinated. “Fundamentally, what we are dealing with here is big money and nobody cares about us as Americans.”

Lee said he supports people who want to be vaccinated but he and his family have decided not to take the shot.

“I look at some of these shots and I wonder if you look at it and you don’t know if it’s battery acid or not,” he said.

Gilbert said, “It’s not a vaccine it’s a gene therapy.” He said under his administration people would be free to get vaccinated but it would be their choice, and they would also have the choice to receive hydroxychloroquine and ivermectin.

Danny Story, who is also founder of Elko Adult Softball, asked the candidates what they would do to stop student athletes in Nevada from being required to test for COVID weekly or more frequently. “These tests come with a potentially deadly exposure to ethylene oxide, a known carcinogenic compound which is used to sterilize the swabs for the test,” he said.

Gilbert said he got into the race for governor after Nevada students were required to be taught remotely. “They stole their youth, they stole the American dream from our beautiful children.”

Gilbert said after student were sent home “90 percent failed – but they still got passed.”

Gilbert said he got where he is today because of sports, becoming a three-time national boxing champion and four-time all-American. He said Nevada’s student athletes were the only ones in the union to be denied the experience they needed to go to the next level.

“I’ll make sure that any future governor will be restrained from pulling this nonsense,” he said.

Simon said there would be no mask or vaccine mandates if he is governor.

“There is no data to support masks,” he said. “The data on the vaccines is not there.”

Simon said the coronavirus “will be around and part of us forever.”

“We actually want our children to get a little bit of exposed. That’s how every single infectious disease has been handled in the history of this country. But we have an evil dictator at the NIH who someday should be hung here in Elko,” Simon said to applause from the crowd, “because he actually has murdered many human beings around the world.”

Lee said he wanted the audience to know that the Elko County School District was not responsible for how COVID is being handled. He said the state superintendent and state trustees are responsible under the governor, and “none of those people are accountable or do anything to help Elko County. They’re just nonexistent.”

“Per our CDC, our children are at a statistical zero percent chance of death,” Gilbert said. “Our healthy children should not be tested. … Our counties need to stand up and fight for our children.”

Moderator Robert Leonhardt identified himself as “a former school board member that was forced to resign by the corrupt, good old boys,” and asked what the candidates would do as governor to protect local officials.

Simon said “it’s illegal to intimidate and harass anybody. … “School boards need to understand what their power is and push back.”

Lee responded that “The only way you can remove a school board trustee is by a vote of people who voted them in.”

Gilbert said he was very familiar with the Elko’s school board situation and blamed it on Sisolak.

Gilbert said Sisolak was a “tyrant and a bully, and I’ve got an old-fashioned solution for a bully like that: you punch him in the mouth.”

Prior to the debate, Elko County Commissioner Rex Steninger said he was “a strong supporter of Joey Gilbert. I think he is the only fighter of the bunch and we need a fighter to correct the course our state is on.”

About 200 people attended the debate in person.

A little over a year before the 2022 midterm election, Nevada Democrats are worried that Governor Steve Sisolak is seriously vulnerable to a c…

After the debate, Hoffman said it “was an excellent event, well planned and executed. It made me proud of Elko and of our State. The local moderators were prepared and asked meaningful, tough questions relevant to Elko County and all rural Nevada. The candidates gave thoughtful answers about complex topics, often agreeing with one another but each with a unique perspective.

“Best of all, everyone was respectful,” Hoffman continued. “The candidates, the audience, the moderators were engaged in the issues, not in personalities. The Elko County Republican Party thanks the Gilbert campaign for sponsoring this and we especially thank all three candidates who put in the time and effort to come talk to the Elko County voters. We agree with one main theme of the evening, Sisolak must go.”

The Associated Press reported this week that Sisolak leads his challengers in campaign contributions, collecting $4.5 million in 2021 and now has $8.3 million in cash on hand.

Lombardo had $3.1 million in contributions at the end of 2021 and $2.7 million cash on hand. . He spent nearly $1 million in 2021, including on media buys, consultants and campaign staff.

Lombardo spent nearly three times more than Heller, who reported raising roughly $650,000 and ended the year with $265,000 cash on hand.

(Editor’s note: The CDC has stated that evidence is insufficient to support treatment of COVID-19 with hydroxychloroquine, and guidance from the National Institutes of Health recommends against its use. The Food and Drug Administration has not authorized or approved ivermectin for the treatment or prevention of COVID-19, saying it has not been shown to be safe or effective for that purpose. Claims that COVID test swabs sterilized with ethylene oxide will cause cancer have been refuted by media including Reuters, USA Today, and www.factcheck.org.)

CARSON CITY — In a campaign ad, Nevada gubernatorial candidate Michele Fiore steps out of a Ford F-150 with a handgun holstered on her hip and…

Nevada Republicans boo Heller over past with Trump at debate

With the filing deadline still six months away, seven Republican candidates have already announced their intentions to run for governor of Nev…

About 200 people entered the Elko Convention Center auditorium for a debate on Jan. 21, 2022.