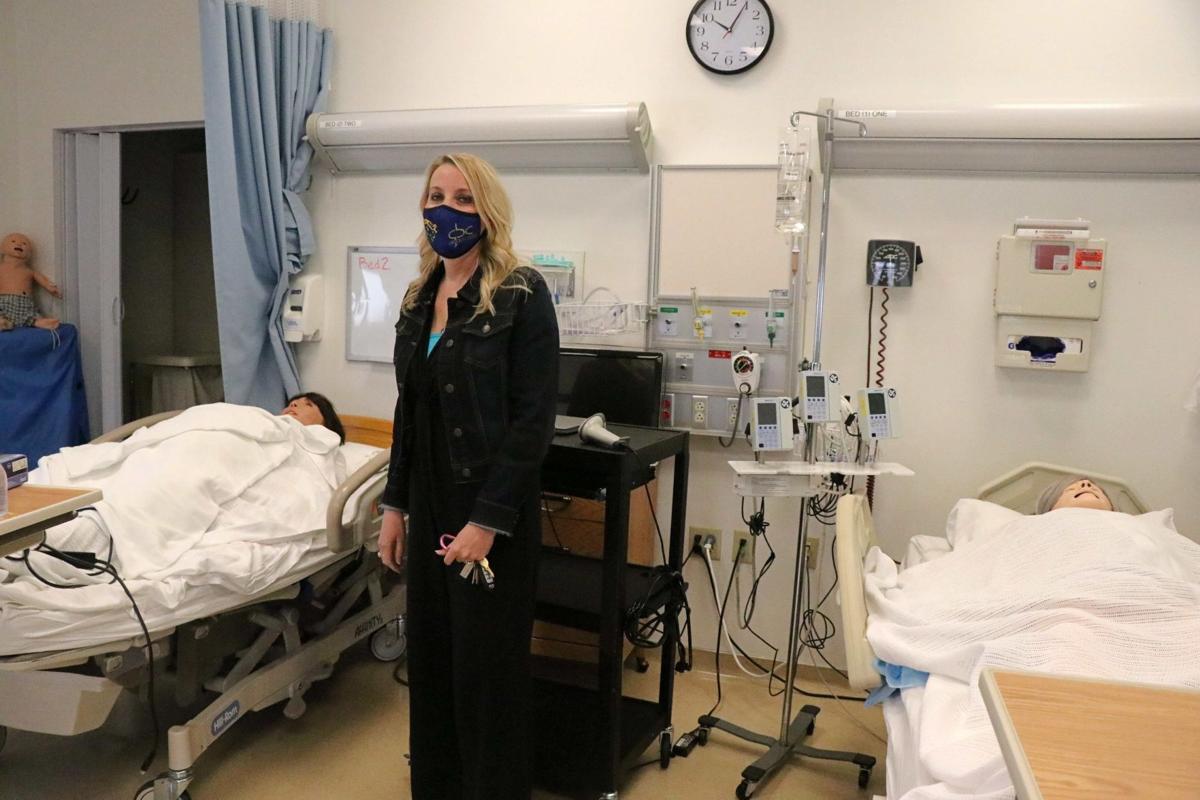 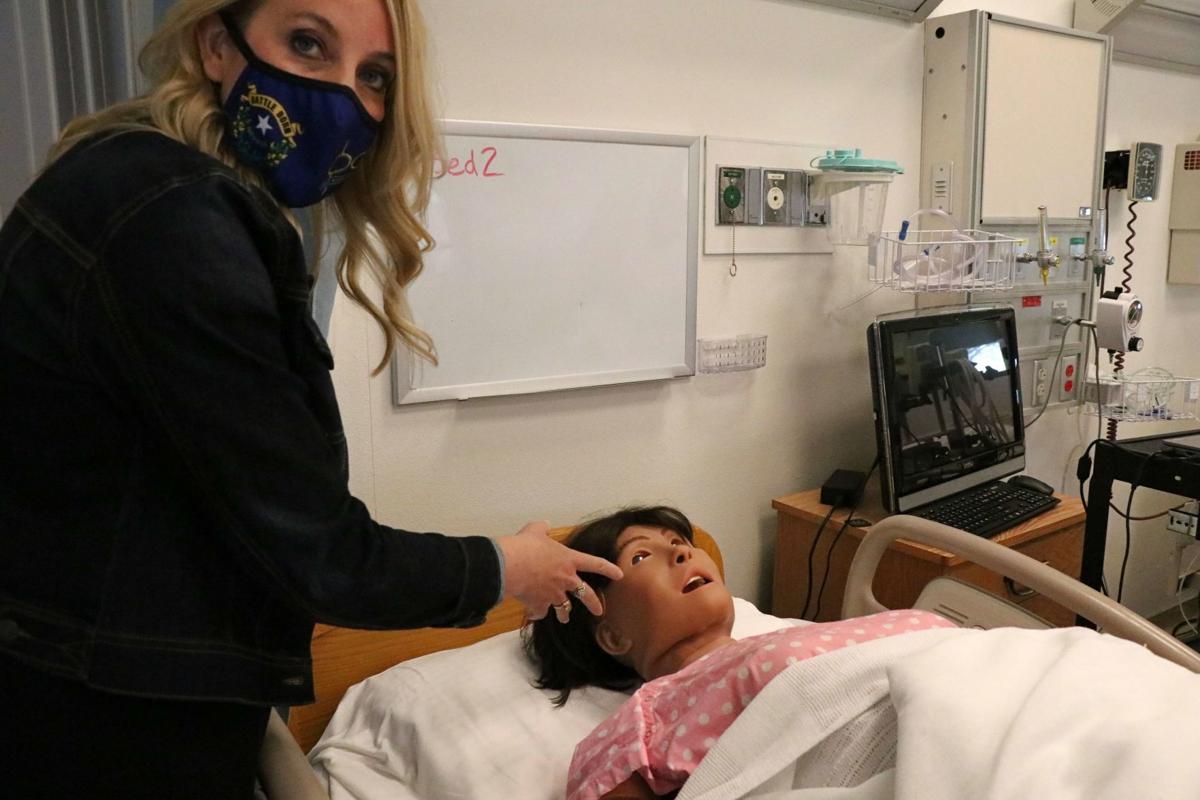 Great Basin College Dean of Health and Human Services Amber Donnelli shows a simulated patient that has lifelike features used for nurses to train in medical settings. The simulated patient is controlled by instructors in a booth that gives birth and has realistic features such as blinking eyes and flexible hands. 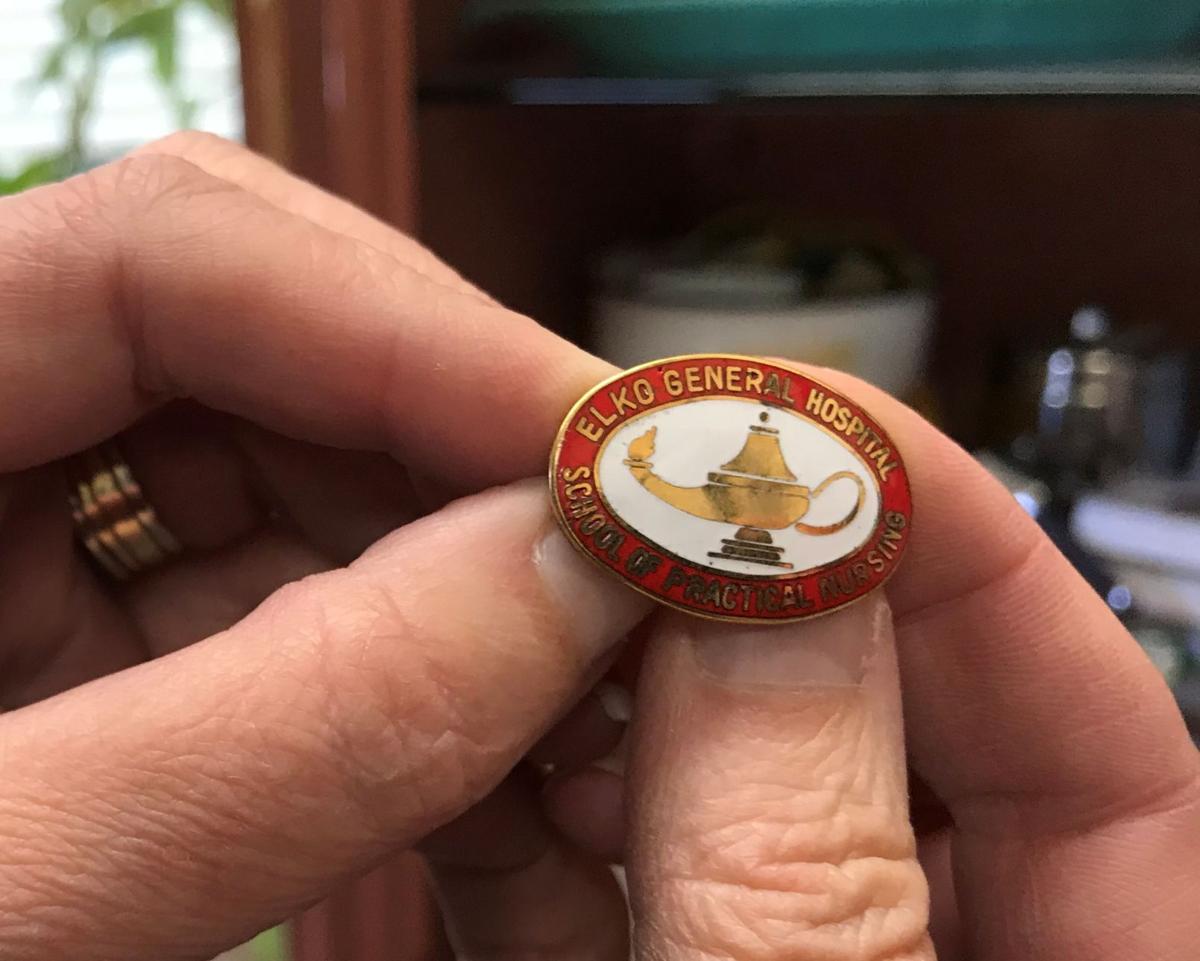 A pin from Elko General Hospital's School of Practical Nursing is displayed by Dean of Health and Human Services Amber Donnelli.

ELKO – The seeds of Great Basin College's nursing program were planted decades before it came to life 50 years ago.

Today, it has become a thriving success ranked the No. 1 nursing program in Nevada.

GBC instructs cohorts at four campuses -- Elko, Winnemucca, Pahrump and, as of last fall, Ely. The program has been recognized for its contribution to the state's nursing workforce and its NCLEX-RN pass rates.

“We had the public nominate nurses, CNAs and LPNs,” said EDFP Advertising Director Nancy Streets. “A panel of local judges chose from the nominations.”

This spring, GBC was ranked No. 1 and named among the Best Value Nursing Schools, out of seven schools reviewed by Nursing Degree Search.

It is a far cry from the humble beginnings of the nursing program that started as a means to train young recruits for the old Elko General Hospital before it was formally established with the founding of Northern Nevada Community College in 1971.

The first group of nurse aides can be traced back to the local Girl Scout troop formed in the 1940s, according to D'ette Mawson, who wrote about the history of Girl Scouts in Elko in the Northeastern Nevada Historical Society Quarterly.

Being a nurse was a full-time job in the early days of Elko General. Three to four nurses lived on hospital grounds. Nurse Marie "Herbie" Herbster, who served for 27 years, was one of them.

In his memoirs about Elko General published in the Northeastern Nevada Museum Quarterly, Dr. Hugh Collett remembered Herbie as a jack-of-all-trades, who served as the building's electrician and plumber while handling surgical nurse, obstetrical and pediatric duties.

But finding and employing trained and experienced nurses was difficult for a rural hospital, Collett recalled. Nurses worked for a short time before disappearing, usually before their background checks returned that revealed they had some trouble at their previous employer.

In the late 1950s, Dr. Thomas Hood and other doctors started the first LPN nursing school when it was feared there wouldn't be enough nurses to keep Elko General open. It was supported by the Elko County School District, starting in 1957.

Dr. George Manilla recalled that he was one of the many doctors who gave lectures to nursing students, noting that graduates participated in a capping ceremony as a "badge of nursing."

ELKO – Great Basin College was recently honored as the “No. 1 Ranked Nursing Program in Nevada” as determined by RegisteredNursing.org, a nurs…

In 1971, the program was officially launched at Northern Nevada Community College, and seven years later was transformed into an Associate's degree program. Now graduates receive an RN.

The LPN program, which saw 214 graduates, was discontinued in 1989.

The program also expanded to serve other satellite campuses in 2015, with the addition of Winnemucca and Pahrump cohorts. Ely students began instruction in the fall of 2019.

The program received another boost in 2005 when a Bachelor's of Science in Nursing was offered by GBC, which has graduated 189 students.

Today, the nursing program has nine full-time faculty and eight part-time faculty teaching and supporting students through their first and second years of instruction.

Amber Donnelli, dean of Health and Human Services, said the bachelor's program allows for more job opportunities for graduates "and the ability to move onto the next level of nursing education."

But it also benefits the patients.

"Research has shown that higher levels of education in nursing are related to lower mortality rates among patients and lower rescue rates," she explained. The bachelor's program teaches the decision-making process using evidence-based practices and additional research practice.

"It focuses on greater development of diversity and cultural competence as it relates to rural health care, in addition to leadership role focus and application," Donnelli said.

More than 90% of students that graduate remain in Nevada, based on where they graduated, she added.

"Our hospital partners in each community made sure that nursing students were able to continue and complete clinical rotations in the fall," Donnelli said.

Students who apply are selected by location and a points-based system for those looking to enter the program. "Students can rank their three top choices and are also given an entrance exam that focuses on math, English/communications, and science," Donnelli said.

The pandemic pulled the nursing staff and students into service, working with contact tracing through the health science department and volunteering with vaccination clinics at local hospitals and the various community locations.

Now in its 50th year, the GBC nursing program is in full bloom and fulfilling the goals of doctors and nurses from the past to keep the cycle of nursing education alive and thriving.

Donnelli said the past usually meets the present as graduates work alongside the new students entering the program.

"With graduates mostly staying within their communities, our nursing faculty are interacting with previous graduates as they work with nursing students."

Check out the special online section at elkodaily.com

Great Basin College Dean of Health and Human Services Amber Donnelli shows a simulated patient that has lifelike features used for nurses to train in medical settings. The simulated patient is controlled by instructors in a booth that gives birth and has realistic features such as blinking eyes and flexible hands.

A pin from Elko General Hospital's School of Practical Nursing is displayed by Dean of Health and Human Services Amber Donnelli.