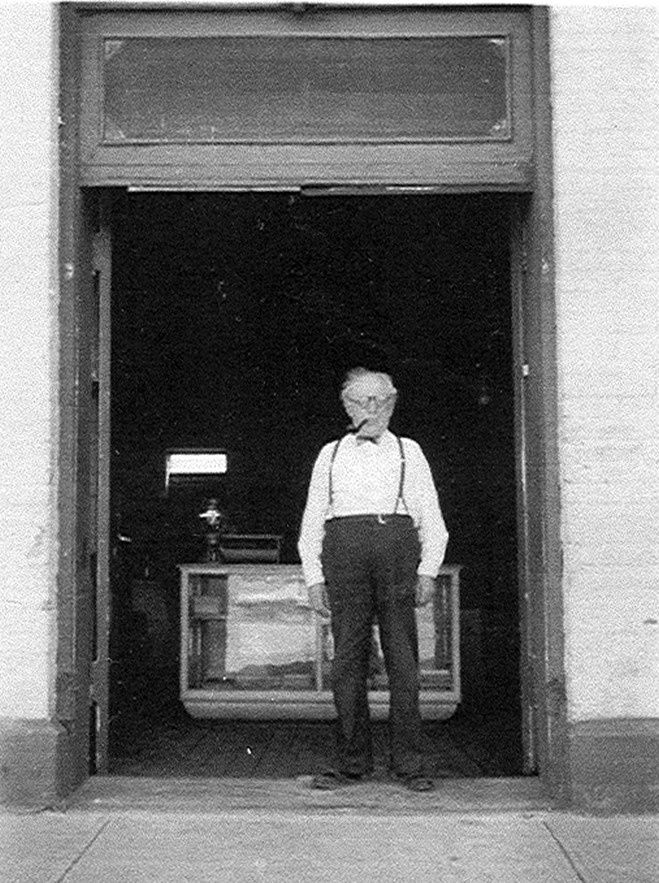 January 4, 1896: The coyotes at Lone Mountain are knowing fellows these days. A couple of them packed off a whim-horse harness from Weston’s mine last week and buried it for future provisions. They chawed it in two and hid one part almost at the base of the mountain and the other part near the summit, Mr. Weston tracking them to both places. What a howl they’ll set up some night this winter when they discover their loss.

The marriage of Miss Mamie Russell, oldest daughter of Mr. and Mrs. James Russell of Elko, to Mr. Archie Dorsey of Fort Halleck, took place at the Russell resident on Wednesday afternoon, in the presence of relatives of the bride and groom, and a number of friends of the family. At the appointed time the young couple took their places under the arch-way and in less time than it takes to tell it, were made man and wife by Rev. M.S. Riddle, who is most efficient in tying marriage knots. After the interesting ceremony came a wedding supper, fit for kings. About 7 p.m., sleighs conveyed all to the residence of Henderson Green, where the next half hour was spent in music and dancing. The whistle of the train was the signal for a shower of rice, amid which the young couple boarded the train for Fort Halleck, their future residence.

January 3, 1921: Deeth, the gateway to Starr Valley and Jarbidge, logical trading point for the rich Mary’s River country, may some day be as famous as Petaluma for eggs. There is now being organized a company which propose to build twenty complete chicken farms within a half a mile of the Western Pacific railroad and within a mile of the Southern Pacific. The plans call for stocking the ranches with chickens and selling the chicken ranches at reasonable terms to prospective home dwellers in Elko county.

January 7, 1921: The grammar school re-opened January 3, after a vacation of two weeks for the holidays. Both teachers and pupils returned with new enthusiasm. At a teachers’ meeting Tuesday, it was decided that the school would give two public programs during the year. The first is to be an operetta given by the upper grades sometime in February. A number of new pupils have been enrolled since the holidays. Agnes Tilbury and John Martin in the sixth grade; John Frazier in the fifth and Lucille Hoyt in the third. Those leaving school since the vacation are Russell Dunn and Atillio Damele in the seventh grade; Periena Damele in the eighth and Ruth Fernald in the second.

January 7, 1946: A compilation of figures for 1945 shows that the city fire department answered 19 calls for homes, nine business buildings, 32 grass fires, one emergency call, five automobile fires, two false alarms, eight miscellaneous fires and two trash fires. Property damage was light for the year with only one structure, the residence of Mr. Chris Salas being listed as a total loss.

January 8, 1946: Pete Corta recently returned to the Corta ranch at Jiggs after being honorably discharged from the service. Corta was a sergeant while in the service. Robert L. Brummel has returned to his home in Elko after serving three years in the European theatre. His wife is the daughter of Mr. and Mrs. Earl Prunty of Charleston.

January 9, 1946: Miss Hazel Woolverton, daughter of Mr. and Mrs. Roy Woolverton of Elko, became the bride of Alfred Salicchi, son of Mr. and Mrs. Caesar Salicchi of Lamoille at a wedding solemnized Sunday afternoon at the Elko county court house. She was attended by Miss Knoela Woolverton and Mrs. Charlotte McClure. Caesar Salicchi, Jr., was his brother’s best man. Upon their return from a honeymoon in Portland, Ore., they will make their home in Lamoille.

January 5, 1971: Mother Nature softened the sting of winter slightly this morning as the temperature dropped only to 12 degrees below zero, six degrees warmer than yesterday.

January 7, 1971: An Elko couple, Mr. and Mrs. Delmo Andreozzi, are the parents of the first baby of 1971 in Elko County and the winner of the 15th annual “Baby of the Year Contest”. Their daughter, Charlotte Irene, was born Sunday at Elko General Hospital at 10:17 p.m. As winners of the contest, the Andreozzis will receive a host of gifts by 15 local merchants.

January 8, 1971: Elko High School was closed today after a gasoline fire burned a section of the library and caused extensive smoke damage to the rooms in the main building of the school. The fire, believed to be caused by gasoline poured in the area of a book shelf along the north wall near the room entrance and then ignited, was started sometime after midnight. The police said they would have to go through a long process of interviews and further investigating before they could determine who might have started the fire. They have asked the Federal Bureau of Investigation to assist them in the investigation.

January 6, 1996: They played together on a team called “Magic” before entering high school and freshmen standouts Sarah McDonald and Abigail Ash have brought some magic this season to Spring Creek High School girls’ varsity basketball team. Since the addition of the pair of talented ninth-graders, the Spartans have won more games than in the entire history of the school.

January 8, 1996: The Spring Creek Association will hold its third annual Blizzard Open indoor golf week Tuesday through Sunday, Jan. 16-21, at the Spring Creek Horse Palace. The event is being cosponsored by the Nevada Commission on Tourism. Open play will be held Tuesday through Friday. The 1996 Blizzard Open Golf Tournament will be held Saturday and Sunday. The three competitions include: individual stroke play, two-man best ball and couples’ best ball.

Eureka, sometimes called the “Pittsburgh of the West," was the West’s largest and most important smelting center