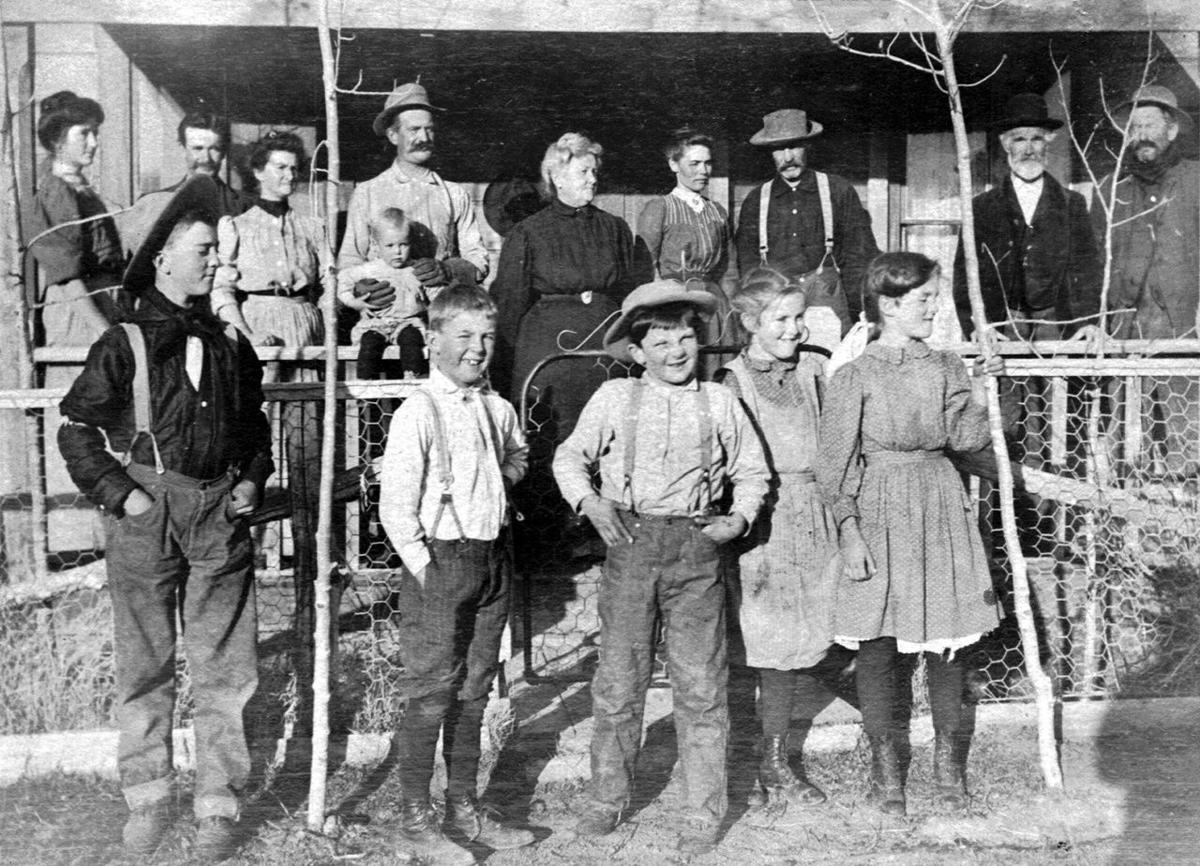 December 21, 1895: The electric light wires have been strung on the south side of Elko’s main street. The storm has stopped the work for a day or two.

Deputy Fish Commissioner Boyce has returned to Carson. He expects to be back in Elko with fish spawn in January.

Some of the University students have gone to their homes rather than submit to vaccination. This will avail them nothing, for they cannot re-enter without presenting a vaccination certificate.

100 YEARS AGODecember 20, 1920: The Misses Alice Hankins, Stella Zunino and Ruth Hackward were arrivals Saturday on No. 21 to spend the Christmas holidays. The young ladies are students of Sacred Heart Academy, Ogden. Among the young folks home from college for the holidays we notice Emma Murphy from California, Ray Griswold from California, Gordon Griswold from the east, Virginia Orr and Marion Streeter of California, Chester Scranton of Reno.

December 22, 1920: When the big schoolhouse at Lamoille burned a year or more ago, the people in that valley conceived the idea of consolidating the three school districts, with the school house in the town of Lamoille, the children throughout the valley to be brought to and from their home by a public conveyance, the expense to be borne by the taxpayers. Three districts were included in the consolidation, Rabbit, Lamoille and Humboldt, and the school houses in Rabbit and Humboldt were moved to Lamoille, remodeled and built on to until the building was sufficiently large to accommodate all the pupils. But a year of experience the residents have come to the decision that the expense of transporting the pupils is too great, and a movement is on foot to undo what has been done in consolidating the three districts. It is doubtful if this can be done owing to the present laws on the statute books.

W.S Short came in yesterday from his ranch in Ruby Valley. He was compelled to come by the way of Tobar owing to the heavy fall of snow on the valley blocking the Secret pass, and the party had a difficult time in getting to the railroad, having to dig their way through snow drifts time and again. Mr. Short says that they have more snow in Ruby than for many years past, insuring a plentiful supply of water next year.

December 24, 1920: Pretentious musical, vocal and ministerial programs will feature the observance of Christmas in all churches in this city, the time of holding the services varying from Friday evening at eleven thirty o’clock until Sunday morning and evening. All churches announce special programs of music and pulpit and all of them no doubt will be well filled at their respective gatherings.

75 YEARS AGODecember 20, 1945: Patients at the local hospital were cheered by Girl Scout troop No. 6. The girls sang Christmas carols and distributed candy, fruit and a Christmas crib to all the patients. The carolers then proceeded to the county farm where they sang for the men, and presented them with tobacco, candy and fruit. The Nevada School of Industry was next visited where the boys enjoyed Christmas carols and gifts. The following Girl Scouts helped to make the afternoon a happy one: Violet Uriarte, Jeanine Hawkins, Della Carillo, Hideko Matsumoto, Carmen Vasquez, Iolanda Cosci, Fern Pattani, Elaine Cosci, Marlene Van Horn, Margilou McCaughey, Margaret Jane Armuth, Georgia Brown, Barbara Williams, Romelia Hernandez, Joan Paoli and their leaders.

December 21, 1945: Cpl. Paul Walther of Fort Halleck was recently discharged from the army at the separation center at Fort Douglas, Utah. Before entering the army he was employed as telephone transmission man at Elko. Corporal Walther, who served 19 months in France and Germany, is authorized to wear the European Theatre of Operations ribbon with five battle stars, the Good conduct medal, American Theatre and Victory ribbons. He is also holder of a unit citation award.

December 22, 1945: Temporary officers were elected to start the organization of an active ski club. Bob Shook was elected president, W.B. Mabee was selected Sec. Treas. Larry Monroe was selected to have charge of publicity. Tom Morefield reported that part of the equipment for the ski lift was on hand and the balance was on the way. Those present at the meeting included, Frank Unamuno, Thomas Morefield, Bob Shook, Frank Clawson, Larry Monroe, Dick Williams, Gordon Wines, George Sheiks, Bruce Mabee, Nelson Prentice, W.B. Mabee.

December 24, 1945: Kris Kringle is ready to pay his annual visit to Elko county. He’ll not be loaded down this year with electrical gadgets and he may not have a car for your stocking, but he’ll be bringing more joy and happiness than he has bought for the last four Christmases – because the world is once again at peace. Yes, Elko county, like the rest of the nation is ready for a grand and glorious – a joyful and thankful Christmas celebration, with thanks in the hearts of all that peace has again returned to the world.

50 YEARS AGODecember 20, 1970: A donation to the college in the amount of $320 was presented to Dr. Elmer Kuntz, president of Elko Community College by Macksene Jensen, Sherma Reid and Betty Kaiser, sponsors of a recent children’s theater production of Christmas stories staged as a benefit to raise funds for a new piano at the college. Mrs. Kaiser said the effort is aimed to raising $1,200 for the purchase of a small grand piano for the school, which would enable the scheduling of a concert series at the institution.

December 21, 1970: Richard Welsch, a sergeant on the Elko city police force, will serve as the new juvenile probation officer for Elko County, according to an announcement today by Elko District Judge-elect Joseph O. McDaniel. Welsch is a veteran of 11 years on the local police force. He will assume his new duties succeeding Ernie Hall, during the first week of January.

December 22, 1970: James A. Moren, son of Dr. and Mrs. L.A. Moren of Elko, today was named as one of 24 members of the first class to study medicine at the University of Nevada. Moren, 21, is now an under-graduate in pre-medicine at Yale University and is a graduate of Elko High School.

December 24, 1970: Members of the Elko Lions and Rotary Clubs were honored guests yesterday as the Commercial Hotel hosted its annual Christmas party for the two service clubs. Members were treated to lunch and then a musical program arranged by Oren Probert, manager of the Commercial. The program opened with Wayne Skeem, band director at Elko High School, showing a film of the award-winning “Band of Indians” in the group’s recent performance at the University of Nevada in Reno. Skeem then introduced Mary Lyon who performed a flute solo, and then Patricia Lyon, who played a clarinet solo. Both girls were accompanied by their mother Mrs. Paul Lyon. Cindy Crouch, who will be Elko’s entry in the Nevada Junior Miss Pageant, sang a song, accompanied by Skeen, Mrs. Skeem, Kyle Woodward and Kenny Ballew.

25 YEARS AGODecember 21, 1995: Undefeated with a 22-game home winning streak and now a No. 1 ranking in the Nevada AAA League poll, all is right with the world of Elko High School girls’ varsity basketball as it readies for a visit by Hug High School. While flattered by the ranking in the poll, Elko head coach Lynette Davis, with back-to-back AAA titles, seemingly knows better. “There’s no way we are the number one team in the north,” she said. “That’s an honor and it’s something good that I hope gives our team incentive to be better.” Hustle and defense have been hallmarks for Elko so far. Davis and assistant coach Alice Digenan continue to teach offense and instill fundamentals. Among those coming on strong for the Indians include Lauren Beckman, Melissa Jenkins, Carie Neuman, Nicky DeVeny, Nadine Hutchinson and Katie Ratliff.

December 24, 1995: Home Health Services of Nevada this week paid tribute to co-founder and longtime director, Marguerite Tourreuil, who is retiring. Home Health provides skilled nursing, physical therapy and light housekeeping services to elderly and disabled clients still capable of living independently. Tourreuil helped found the private home care business in 1962 with the late Dr. John Read. She has served on the board since that time.