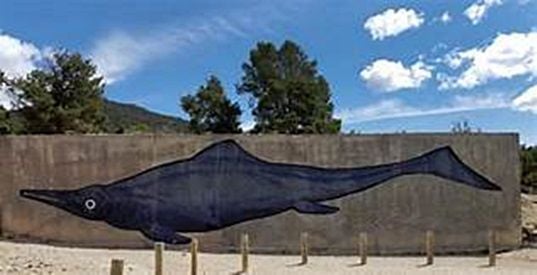 My first visit to Gabbs was when Oliver Perondi and I worked for NDOT and went to final out the contract records for construction of new State Route 844 for access to the Berlin-Ichthyosaur State Park.

We met with Resident Engineer Chuck McPartland at his office in town. We told him about our experience with getting to town on State Route 361 from US 50 and running across thousands of tarantulas crossing the highway, leaving the surface a slick mess of dead spiders. He told us they migrate every fall and this happens every year. I preserved one of the big black hairy spiders in alcohol to bring home to show my kids.

We were planning to stay overnight and asked Chuck where we could stay and where was the best place to eat. He recommended a local restaurant and a motel for us. When we checked in to the motel, the lady at the desk told us that when we used the shower, we had to use the cold water faucet for hot water and the hot water faucet if we wanted cold water. She explained the water from the mining company well was hot spring water and that the hot water heater was just a storage tank to let the water cool off.

Totally confused by this time, we went to the local restaurant and ordered dinner. Just as we were finishing with dinner, a construction worker from the crew that was building the new highway came in. He was carrying a hard hat in his hand and we noticed it contained a roadkill deer liver the man had salvaged. He gave the liver to the cook at the cafe and said he would be be back later. The next evening when we came in to the restaurant, there was a sign that said “special tonight, liver and onions.”

On my next visit to Gabbs years later, I came with my wife and kids to visit the Berlin-Ichthyosaur State park and campground where we camped for the evening. It had been a long hot ride and the kids were anxious to get out and run around the camp grounds. As I was unpacking things, I notice a rattlesnake in a sagebrush where the kids were playing. I had seen a sign that said “no firearms,” so I asked the park ranger if I could have permission to use my .22 rifle to kill the snake for safety. He agreed, so I shot the snake and we were on watch the rest of the day.

The next morning, we toured the Berlin-Ichthyosaur site and the shelter where the fossilized skeletons of several of the giant 65-foot long fish-like creatures had been found. A wooden structure has been constructed over the fossilized remains of many ichthyosaur skeletons in a mass grave where they died about 95 million years ago when this part of Nevada was an ocean. There is a concrete wall bearing a full size mural of what the creature looked like when alive. The State Park also includes the old ghost town of Berlin, a cemetery and the Berlin Mill.

On the way to Austin with my small camp trailer, I forgot to close the vent atop the trailer. All the way to town, dust from the dirt road to Austin sucked into the vent. When we arrived in town, the inside of our trailer was dustier than the dirt road we had traveled. Also, I shot two more rattlesnakes along the way.

Can you imagine traveling like this in Nevada in the 1800s?

You can order the author’s books at denniscassinelli.com.

For eight years, Cassinelli Landscaping and Construction was the landscape and snow removal contractor for the private community of Glenbrook …

My first memory of Fallon, Nevada was when my parents took me there to see the Nevada State Fair when it was being held at Fallon in the 1940s…

I am sure that readers of my columns have noticed that I have written articles about several towns in Nevada. Unlike some writers, I usually d…

Christopher “Kit” Carson (1809-1868) was an American frontiersman, trapper, soldier and Indian agent who made important contributions to the w…

Being from a ranching family I can relate to cowboys and ranchers, especially in the area of Winnemucca, Nevada. I have noticed that in recent…

For 19 years, I worked for the Nevada Department of Transportation. During that time I made numerous trips to Elko County Nevada while working…