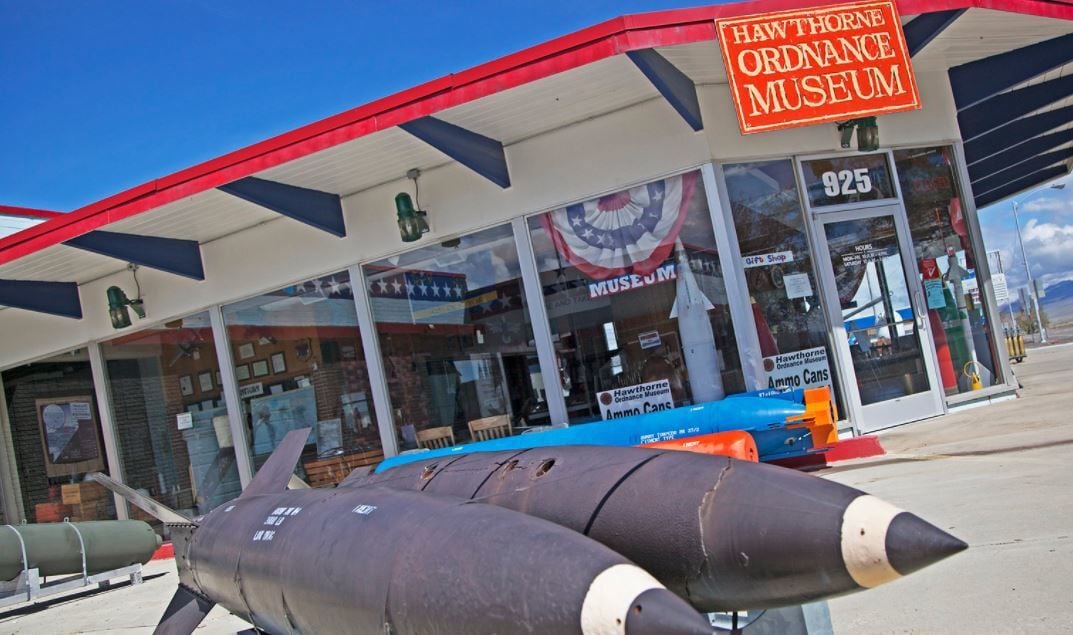 Being a former U.S. Naval Reservist, I want to tell the amazing story of how Hawthorne, Nevada helped the United States to win World War II and the Korean War. The Hawthorne Naval Ammunition Depot (NAD) was established after a major disaster occurred at the Lake Denmark Naval Ammunition Depot in New Jersey, in 1926. The accident virtually destroyed the depot, causing heavy damage to the adjacent Picatinny Arsenal and the surrounding communities, killing 21 people, and seriously injuring 53 others. The monetary loss to the Navy alone was $84 million — just over $1 billion today — mostly in consumed explosives.

As a result of a full-scale Congressional investigation, the seventieth Congress in 1928 directed the establishment of a Board of Officers to provide oversight of the storage conditions of explosives. A court of inquiry investigating the explosion recommended that a depot be established in a remote area within 1,000 miles of the West Coast to serve the Pacific area. As a result, the desert area near the railroad town of Hawthorne, Nevada north of Walker Lake was selected.

Construction began on the Hawthorne NAD in July 1928, and NAD received its first shipment of high explosives in October 1930. When the United States entered World War II, the Depot became the staging area for bombs, rockets, and ammunition for almost the entire war effort.

Employment was at its highest at 5,625 in 1945. By 1948, NAD occupied about 104 square miles of the the 327 square mile area under Navy jurisdiction. Subsequently, excess Navy lands were turned over to the Bureau of Land Management.

The Ordnance Administration Shop, Building No. 329, was built in December 1943 during the tremendous expansion of the Depot during the World War II period. The Hawthorne Naval Ammunition Depot is a nationally significant military district. It had been built for state-of-the-art ammunition storage in the late 1920s. It is the largest depot of its kind known in the world with 2,501 munition magazines and storehouses, 212 miles of railroad track, 418 miles of paved roads, and 232 square miles of land. It was significant for its role in World War II, manufacturing a vast amount of ordnance, it was the Naval Ammunition Depot for the Pacific Theater during World War II.

Today, the base has become the Hawthorne Army Depot (HWAD), since 1977. It surrounds the small town of Hawthorne, where most of its employees reside. Prior to the facility becoming contractor-operated, it was staffed primarily by civil service workers and military personnel, who were housed on government owned property neighboring Hawthorne, including the now-abandoned town of Babbitt and military housing known as Schweer Drive. The housing in Babbitt was made up of large buildings created to be duplexes. Since the disposal of Babbitt, many of these “Babbitt Houses” have found their way throughout rural Nevada filling a number of uses.

During the peak of operations in World War II, additional housing was provided in a former Civilian Conservation Corps camp christened “Camp Jumbo”, and in a large adjoining construction camp. The local Sixth Street School was expanded to serve the population growth. On the main street of Hawthorne is the Hawthorne Ordinance Museum that displays some of the material made and used at the base.

Several years ago, I visited the town of Roseburg, Oregon. A truck carrying dynamite and ammonium caught fire early in the morning of August 7, 1959. When it exploded, it killed 14 people and injured 125 more. Several blocks of downtown Roseburg were destroyed. The accident is locally referred to as “The Blast.”

A few years ago, I was the Inspector on an NDOT project in Hawthorne to construct a truck bypass around the downtown section of Hawthorne to avoid the danger of destroying the downtown business section of town in an explosion like the one that had occurred in Roesburg and other communities many years ago.