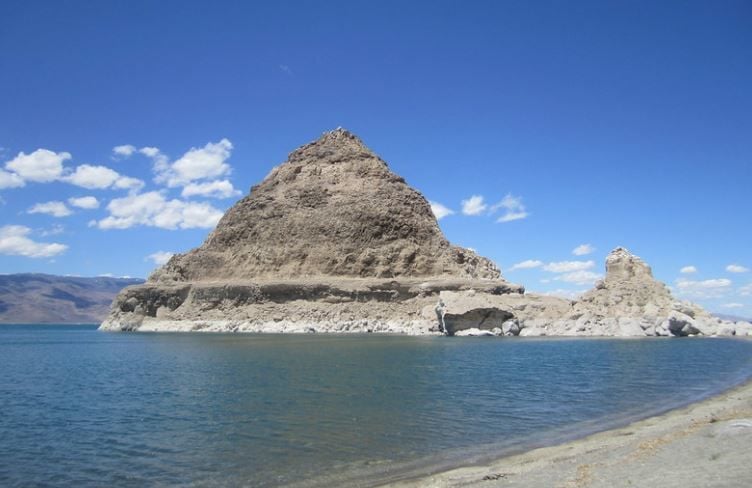 The pyramid formation at Pyramid Lake

Many times, when I wore a younger man’s clothes, my family and I enjoyed weekend trips to Pyramid Lake. This beautiful body of water is one of the last remnants of Ancient Lake Lahontan that once covered much of northern Nevada. Several times, we fished for the cui-ui fish when they were running to the mouth of the Truckee River in the Spring. In later years, when I had a motor boat, several of us fished for the cutthroat trout that can reach the size of salmon.

Pyramid Lake is located on the Pyramid Lake Indian Reservation and permits for fishing must be obtained from the tribe. When I had my boat, I sometimes crossed over to the eastern shore of the lake where many interesting tufa formations can be seen. One of these is the “Stone Mother and Basket” and nearby is the stunning 500-foot high pyramid shaped formation that inspired John C. Fremont to name the place Pyramid Lake in 1844.

The area is sacred to the Paiute Indians and there may be restrictions on access to some of the areas due to vandalism that has occurred in the past. In June 1962, my friend Pepper Schultz and I took my boat across the lake and climbed the Pyramid. This was probably a foolish thing to do, since I have since learned others have tried this and were killed from falling down the crumbly tufa-covered slope.

One thing I learned when climbing the pyramid was that there was hot steam coming out from the top that indicated the Pyramid was formed by calcium-filled hot springs from far below. In later years, Mary and I traveled to Mayan ruins in Mexico, Guatemala and Honduras where there were many pyramids. I climbed all of them but none were as dangerous as Nevada’s tufa Pyramid.

The natural history features found here are extraordinary to say the least, but a trip to this desert lake is incomplete without learning its significance to the Pyramid Lake Paiute Tribe, who have lived around the lake for centuries. To more easily understand this meaningful history, head to Nixon, where the Pyramid Lake Paiute Tribe Museum and Visitors Center provides a window into natural and sacred cultural history important to the region.

No discussion about Pyramid lake would be complete without telling about the Pyramid Lake Indian wars of 1860. In previous articles I have written, I told about the two battles that occurred along the Truckee River and the consequences of this tragic and memorable time in the history of Nevada. As with many wars that have been fought throughout our history, there were no real winners.

In terms of the numbers of combatants killed or wounded, the totally unprepared militiamen of the first battle who marched against the Indians following the Williams Station incident suffered the greatest number of casualties. Seventy-six of them were killed and many more were wounded. Three more had been killed earlier at Williams Station. There were reports that the Indians were justified in the killings at Williams Station due to the white men at the station having kidnapped and molested two Paiute girls.

Casualties suffered by the Indians were much lighter in terms of numbers killed and wounded. It has been difficult for historians to quantify the actual numbers of Paiute casualties. Often the Indians were seen taking dead or wounded warriors away from the battlefields and no one is sure how many there were.

The real casualty of the war to the Indians was the loss of their way of life being destroyed by the sudden influx of whites into the Nevada Territory following the discovery of silver in the Comstock. \

Notable casualties of the Pyramid Lake Indian Wars were Major William Ormsby and Captain Edward Farris Storey; both of them had Nevada counties named after them. Details of these battles can be seen online in my online articles.

The Comstock silver and gold discovery in 1859 attracted thousands of people to Nevada following the California Gold Rush of 1849. One of the …

Blizzard warnings issued for states in the northeast

Blizzard warnings issued for states in the northeast

The pyramid formation at Pyramid Lake