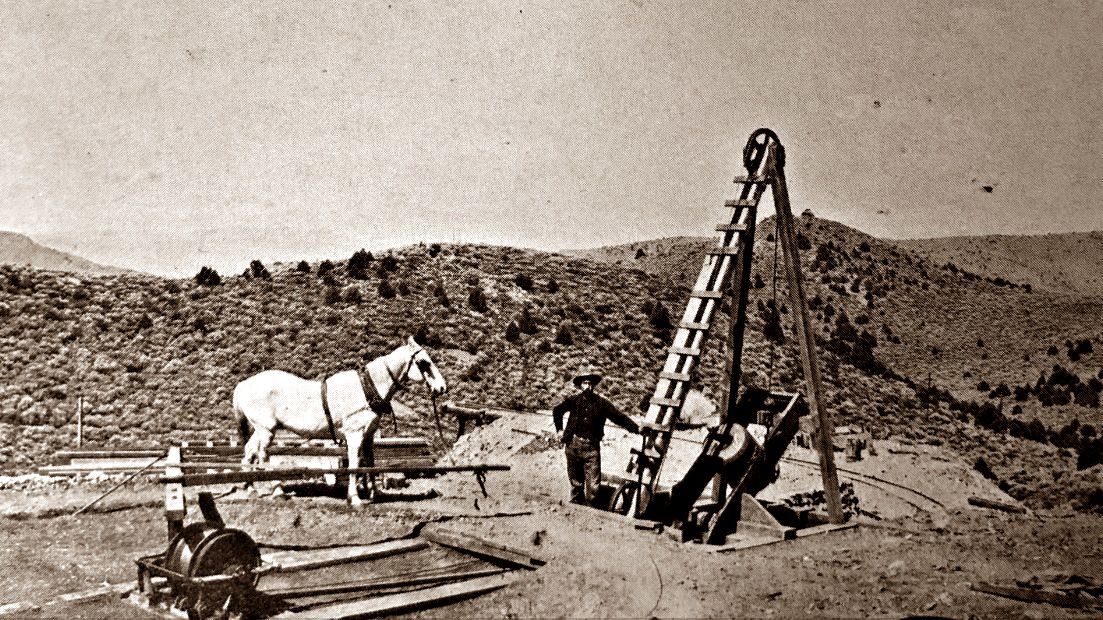 Mining with horsepower in the Como district, 1902

In June 1860, gold was discovered in the Pine Nut Mountains south of Dayton, and a camp called Palmyra was soon established. A post office was opened there on May 5, 1863 and closed on July 31, 1866. Slow to grow, by 1862 Palmyra had only 400 residents and a small business district.

Meanwhile, the camp of Como developed a half mile away and quickly overshadowed Palmyra, and the earlier camp was left with only a hotel and three saloons. The Como post office opened on December 30, 1879 and closed January 3, 1881. Then again it opened on May 20, 1903 and closed permanently on February 28, 1905.

By 1863, Como became a flourishing mining town with four hotels, four dry goods stores, two livery stables, eight saloons and one brewery besides a tin shop, a blacksmith shop and numerous dwelling houses. The National Hotel was a first class house of refreshments second to none this side of the Sierra Nevada Mountains. Although no one made an accurate count of Como’s population, it is estimated to have been “in the thousands.”

Como boomed, and in 1864 it gained a steam-driven mill built by J.D. Winters as well as a weekly newspaper — the Como Sentinel; though it moved to Dayton after just three months. It was around this time that Alfred Doten, a doctor, carpenter, and musician, arrived at Como. While presiding over six mining companies, Doten wrote the “Como Letters,” which were sent to the Comstock twice weekly proclaiming that Como would soon develop into a major mining center similar to Virginia City.

Unfortunately, before the end of 1864, ore was beginning to run out at Como and many of the mines closed. Como was largely abandoned by the next year, though it has undergone subsequent revivals from 1879-1881 and again from 1902-1905. Though these later revivals were more profitable, Como never drew the prior excitement. In June 1935, a last-ditch effort was conducted when a 300-ton flotation mill was placed into operation by the Como Mines Company. It quickly failed, and Como has remained silent ever since.

My family and I have visited what is left of Como a few times but the road is so terrible, the trip is hardly worth the effort. We have found a few Indian artifacts near the townsite. Curiously, the most famous resident of Como was Paiute Chief Truckee, father of Chief Winnemucca. He befriended white men and assisted wagon trains. He had been a scout for Kit Carson and John C. Fremont during their early explorations in Nevada.

Alfred Doten had moved to Nevada in 1863 to participate in the silver boom but soon began work as a reporter on the Como Sentinel, Virginia Daily Union, Virginia City Territorial Enterprise, and Gold Hill Daily News, which he bought in 1872 and guided to a legacy as one of the leading newspapers of the Comstock.

In addition to his journalistic efforts, Doten is best known for his exhaustive private diaries, which he began writing when he boarded a ship to California in 1849 and continued until the last day of his life in 1903.

For several years, I wrote articles about the Comstock for the Comstock Chronicle in Virginia City. I also did a series of lectures at the Gold Hill Hotel where I told stories about the history of the region. These stories were the basis for the book I later wrote, “Chronicles of the Comstock.”

125 YEARS AGOSeptember 26, 1896: Gardner & Son have taken a contract to repair the Court-house. The interior will be put in first-class sh…

On a hunting trip across northern Nevada on state highway 789, between Golconda and the Tuscarora Mountains, I came to the site of what is lef…

Mining with horsepower in the Como district, 1902