The Elko County School Board of trustees, as seen in this screenshot, approved a hybrid plan and a one-week delay to the school year, staring Aug. 31 to allow an extra week for professional devlopment during its regular board meeting July 28. 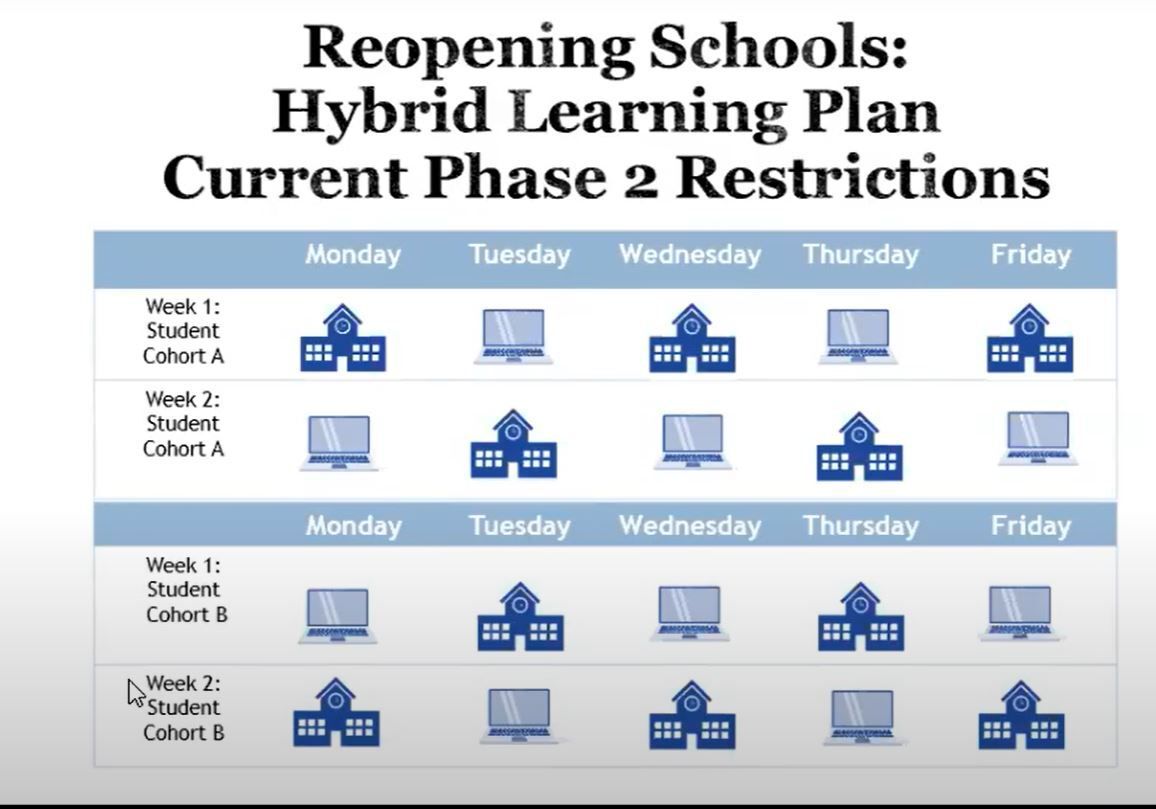 A diagram showing the days of in-person and virutal instruction for four cohorts on an A/B schedule for Elko County School District's hybrid leanring plan was shown during the Board of Trustees regular meeting July 28.

The decision came within a board meeting Tuesday night that lasted nearly six hours, and as Gov. Steve Sisolak issued directives to school districts statewide.

The Elko County School Board of Trustees unanimously approved both motions at about 11 p.m., following a lengthy presentation on the three instruction plans, which was interspersed with more than 300 comments from the public read aloud by various board members.

By delaying the school year one week, it allows the district to take advantage of the state’s five days of professional development for the distance learning piece of the hybrid model.

“The state wants districts to create quality distance learning programs,” said Superintendent Dr. Michele Robinson. “There may be that occasion where we have to pivot from a hybrid or an in-person plan to a distance learning just in preparation for anything that may happen.”

“We have to make sure teachers are well-prepared to do a high-quality distance learning model,” Robinson said.

The decisions came a few hours after Gov. Steve Sisolak released Directive 028, issuing guidelines for reopening schools as recommended by the Medical Advisory Team and the American Association of Pediatrics. Among the guidelines is a reduced physical distancing requirement from six to three feet for pre-kindergarten to middle school students. 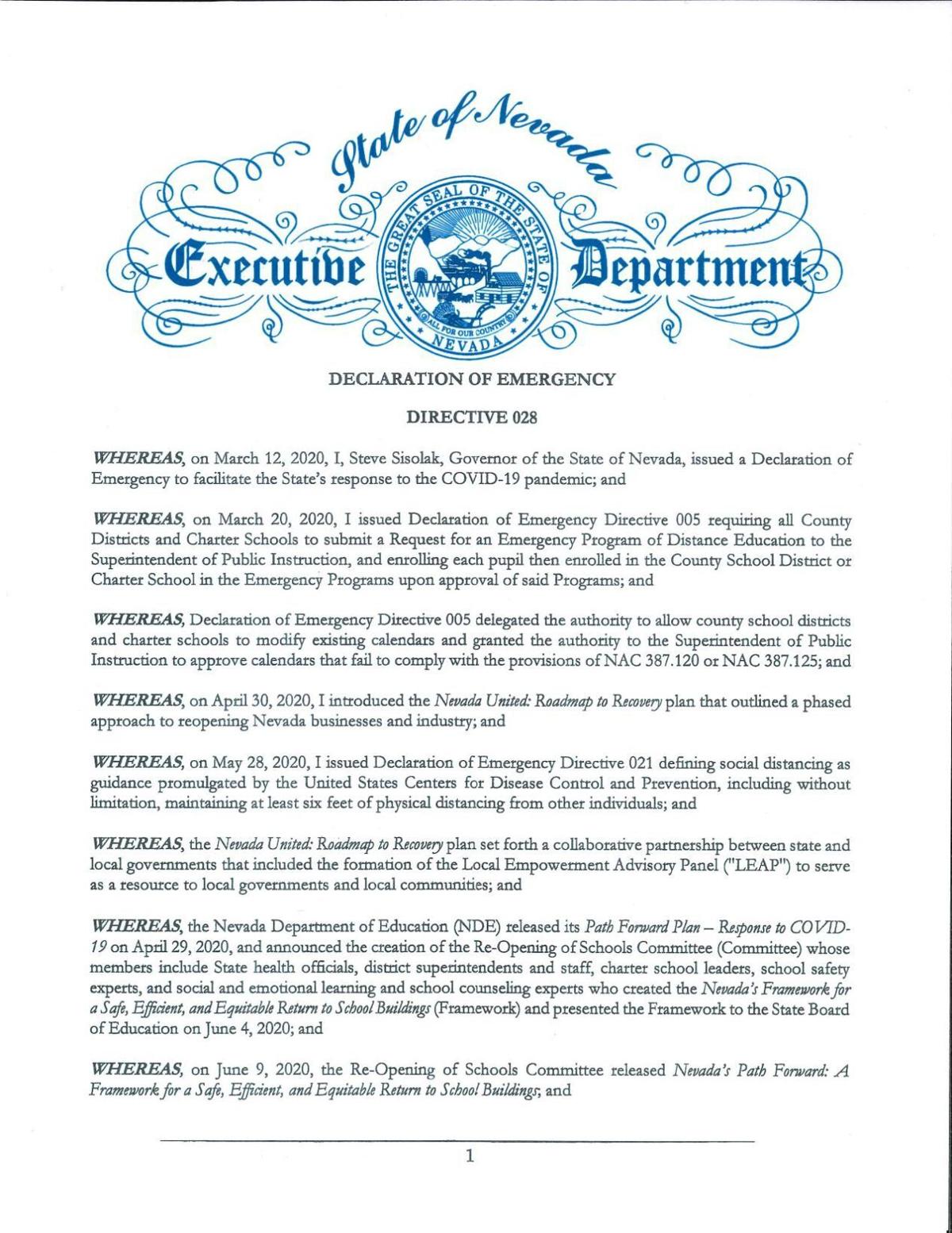 The directive also enacted a mandatory face coverings policy for all students and staff but exempted those with an approved medical condition. Adults entering the school building as parents, visitors, vendors, volunteers and others must also wear a mask.

Robinson said the district would apply for a variance to reduce the physical distancing requirements to “maximize the guidelines that are out there.”

Although the guidelines were released during the meeting, Robinson said the district had to proceed as planned on Tuesday. Still, the school district would review the governor’s directive and apply for variances to “take advantage of that directive.”

“There are things you have to qualify for,” Robinson said. “We’re certainly going to take a look at that. We couldn’t change the path we were on because, again, now we’ve got to find out how the state is going to go about allowing us to do this now.”

Robinson added that the directive was a “perfect example” of how quickly information is released and plans change. “Now, we go about the business of seeing how that fits in.”

Presented by Central Office employees, the three models were described to the board, including some technology measures implemented to provide better support to teaching staff and students.

All plans were developed to be “a Band-Aid,” to get through the pandemic, according to Chris McAnany, secondary curriculum director and reopening committee board chairman. He responded to a question from a parent who asked if the district would reduce teaching staff and maintain the distance learning model beyond the pandemic to function under budget cuts.

“I would say, no, we cannot,” McAnany responded. “The thing to keep in mind with all of this, this is a temporary fix to a severe pandemic situation. This is not the new Elko County School District. This is to get us through until we can open up schools 100% again.”

The hybrid model, which coordinates with current Phase 2 restrictions, combines in-person and distance learning. It requires teachers to receive ongoing professional learning support and for students to have access to the internet through a working device, such as a Chromebook.

Under the hybrid plan, the district meets the requirement of 50% building capacity or 50 people, whichever is less, physical distancing. It also meets requirements for vulnerable student groups in individualized education plans and English language learners.

Following a schedule of two cohorts within an A/B block schedule, students attend every other day, allowing extra days for sanitizing and cleaning.

“You have that full day in the middle of the week between groups of kids to disinfect that building,” explained elementary curriculum director Keith Walz.

Another reason for the every other day schedule is that “the week looks the same for kids and parents.”

The district purchased an additional 1,000 Chromebooks from CARES Act funding as replacements, which will be added to the 10,033 already available for students districtwide.

The district also purchased new laptops for teachers with an integrated camera, and 1,000 internet hotspots through T-Mobile for students without internet access.

“Our IT department went out and hit various spots across our district to determine where they worked,” McAnany said. “Luckily, a lot of our outlying communities, particularly the Wendover area, provided full internet access for all of the students during the emergency closure.”

Public interest ran high throughout the night. The board received 335 public comments, most of which were read during the meeting. It had 801 participants on Zoom and has garnered more than 5,300 views on YouTube.

Numerous questions ranged from health protection and safety for teachers and those immune-compromised to child care for two-income families to online accountability for students and virtual instruction for younger students and IEP plans, to temperature checks and face-covering policies.

Most commenters stated their opinions regarding a return to in-person instruction in the fall, with many supporting a normal school schedule.

Washoe County’s school board conducted a similar lengthy meeting, ending around midnight, upholding a decision to open elementary schools in-person and start middle and high school students on a hybrid instruction model. The board reviewed their plan in response to Washoe County Public Health Officer Kevin Dick’s recommendation to enact virtual learning plans for all grades.

Clark County School District announced earlier this month all schools would switch to distance learning to start the school year.

Before the vote, trustees acknowledged the plans would probably not satisfy every necessity for all involved, and there would still need to be some adjustments as the school year progressed, and new rules are enacted.

“Nothing is going to be a perfect solution right now, so we do the best we can with what we have,” said board president Teresa Dastrup.

ELKO – Reopening plans and a possible one-week delay for the first day of school are two items up for discussion by the school board on Tuesday.

WATCH NOW: Back to school? Teachers, parents and students look at options

ELKO – “Focus on learning without disruptions in classroom time.”

The Elko County School Board of trustees, as seen in this screenshot, approved a hybrid plan and a one-week delay to the school year, staring Aug. 31 to allow an extra week for professional devlopment during its regular board meeting July 28.

A diagram showing the days of in-person and virutal instruction for four cohorts on an A/B schedule for Elko County School District's hybrid leanring plan was shown during the Board of Trustees regular meeting July 28.