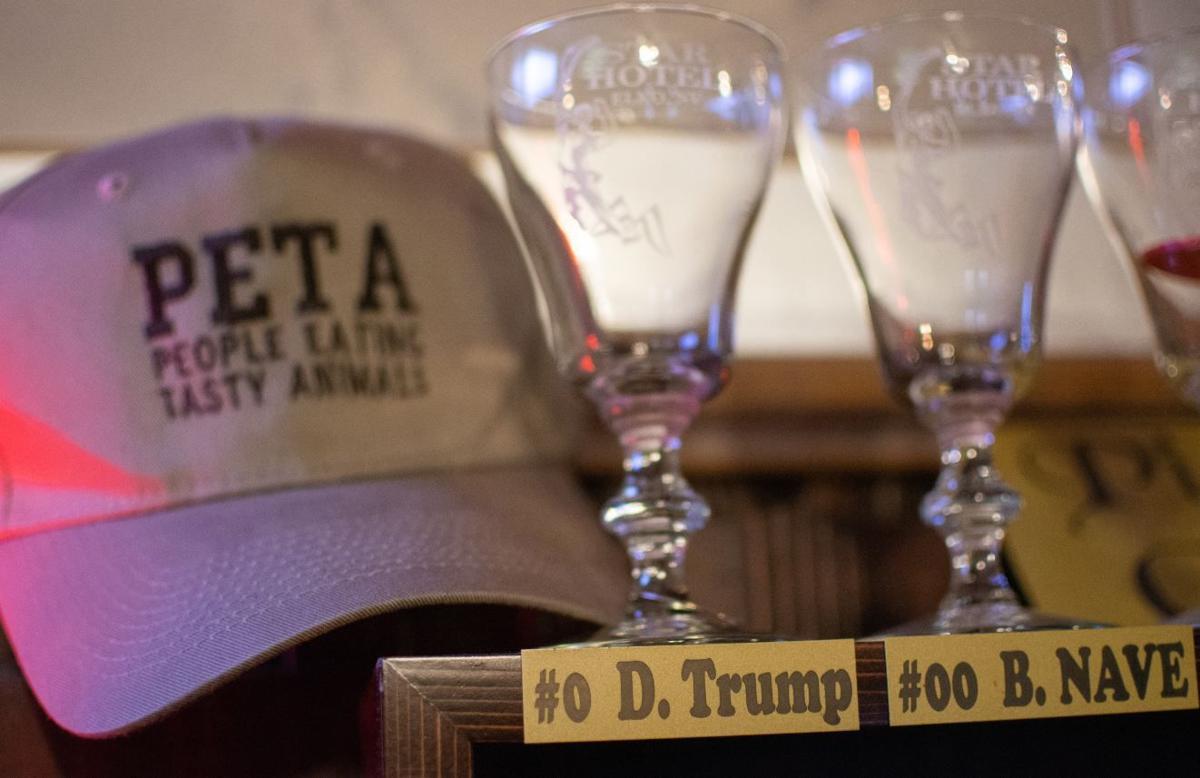 An honorary Picon Punch glass for President Donald Trump sits behind the bar at the Star Hotel, a basque restaurant in Elko. 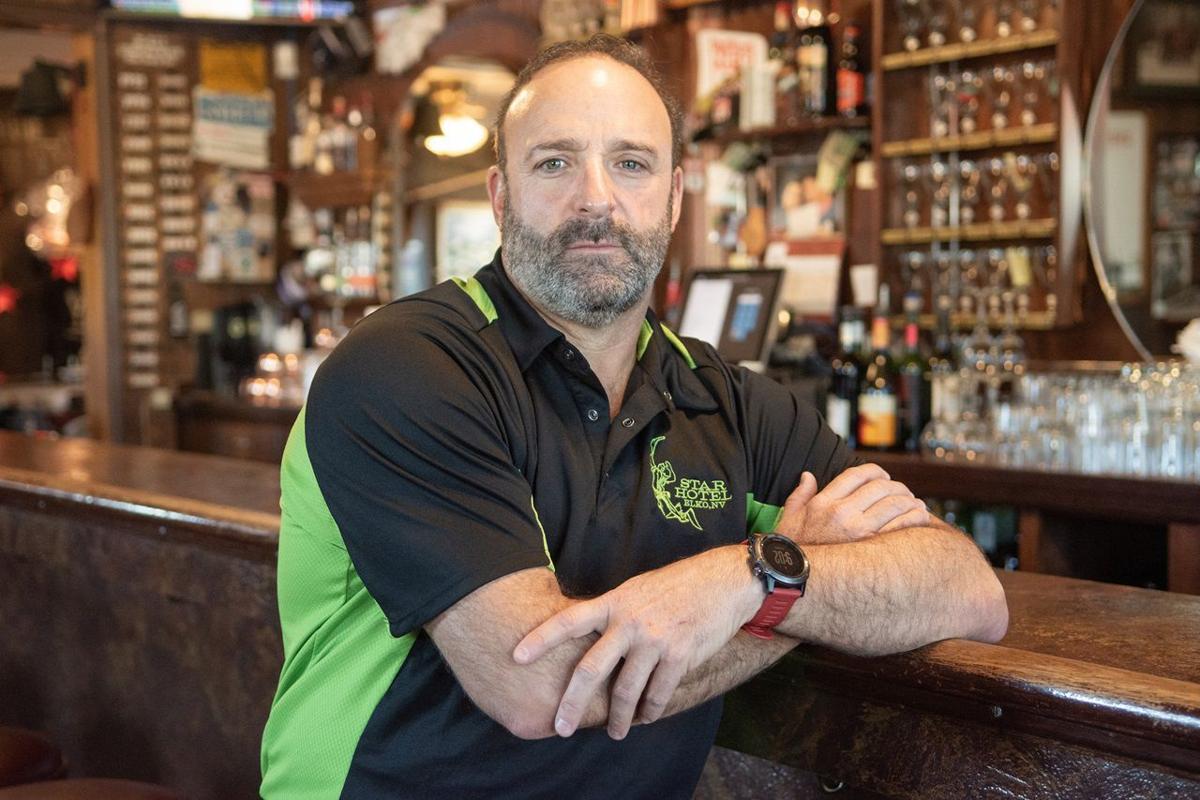 Scott Ygoa, owner of the Star Hotel, a basque restaurant in Elko, poses for a portrait inside the bar.

ELKO — President Donald Trump has never had a Picon Punch at The Star, but there was a glass waiting for him at the iconic Basque restaurant Tuesday night.

On a counter behind a full bar, three empty glasses for Nevada’s cocktail of choice sat next to a gray hat that said People Eating Tasty Animals. Underneath each glass was a label with the name of a frequent customer. Except one name there belonged to someone who has never walked into the establishment. The name on the placard was “D. Trump.”

“Everyone is really happy with how things are going,” said Scott Ygoa, The Star’s owner and an Elko native who dedicated the glass to the president. “You can see the difference.”

Trump is scheduled to rally supporters Saturday morning at the Elko Regional Airport to bolster Republican candidates in Nevada on the first day of early voting and less than three weeks before Election Day. Elko, with a population of about 20,000, is the largest town in Northeastern Nevada and has become a regular stop for statewide and national candidates.

Since his inauguration, Trump has held 12 rallies in Nevada, most recently whipping up voters on Sept. 12. He said at the rally that Las Vegas had “no better friend in Congress” than Sen. Dean Heller, who is running in a tight race with Rep. Jacky Rosen.

Trump’s visit to Elko could also boost turnout for Republican Attorney General Adam Laxalt, who is locked in a close race with Clark County Commissioner Steve Sisolak, a Democrat, and down-ballot candidates. Laxalt and Heller need high turnout in rural counties to win.

The last sitting president to visit Elko was President George W. Bush in 2006, but it’s become common for presidential candidates, on both sides of the political spectrum — from then Sen. Barack Obama to Republican Sen. Rand Paul — to visit the town, which has grown around ranching and mining. But the region is decidedly conservative. Although Trump lost Nevada, he took Elko County with 73 percent of the vote, which roughly tracks voter registration.

Democrats exist in Elko County — and across Northeastern Nevada — as the exception, and they know it. Earlier in the week, the Elko County Democrats held their monthly meeting, which attracted a turnout of 13 people. In the two days since Trump announced the rally, members of the group had been texting back and forth about whether or not to hold a protest.

“We do not have as many people as the GOP has,” said Steve Anderson, who leads the group, works for a mining company and moved to Elko from North Dakota two-and-a-half years ago.

“We’ve been working hard since 2016 to keep the club going,” he added, noting that in past years, the local chapter had little to no presence between election years.

During the meeting, the group’s members discussed the merits of holding a protest near the airport or whether they should gather by the courthouse. Would it be safer to hold the protest off-site? Would anyone notice them if they mingled so close that their efforts would be absorbed by a giant sea of red? The group ultimately decided to have a small presence near the airport, bringing homemade signs and signs to support Democratic candidates in Nevada.

“As a citizen, I am disgusted,” said one Democrat at the meeting who declined to give his name because most of his clients are Republicans. “I just don’t see the Republican Party being what it once was … I did vote for Ronnie (Reagan). That was my very first time voting.”

At the Star Tuesday night, lively conversation broke out about the president. One person used the word “buffoon,” but then quickly added that it did not matter because the White House was accomplishing more than it had in the last eight years. Another said that she loved Trump, while her friend broke out and exclaimed: “I can’t!” She said she voted for libertarian presidential hopeful Gary Johnson, frustrated with both candidates running on the Republican and Democratic tickets.

It’s a big deal when any president comes to Elko. It’s an especially big deal that it’s Trump.

In Battle Mountain Sunday afternoon, Earl Cassorla stood behind the checkout of his fireworks store. On the counter, a campaign letter from Vice President Mike Pence was stacked on a sample ballot for Lander County. Inside Cassorla’s Roller Coaster Fireworks Outlet are rows of firecrackers. Outside, there is a yard sign for Laxalt and other statewide candidates. In addition to selling fireworks to locals and passersby, Cassorla chairs the county’s Republican Party.

When a customer passing through from California came in, Cassorla told him about his conservative newsletter. Cassorla predicted that people would come to the Trump rally from neighboring counties such as Lander, in addition to bigger cities such as Salt Lake City and Reno. He said although some people might not agree with Trump’s tactics, they feel he is accomplishing a lot. When asked on what issues, Cassorla cited trade, foreign policy and border security.

About 30 minutes later, Cassorla’s brother, a co-owner, walked in with a volunteer firefighter in Battle Mountain and Donna Roth, a Democrat who moved to Battle Mountain in 1980. Roth said she was a life-long Democrat, and although she voted for Laxalt, she does not support Trump.

Her immediate reaction to the rally was “keep him out.”

“I never thought I’d see the day we had a president who spoke the way he does to people about people,” Roth said.

“I’ll stay away from Elko that day,” she added.

Biden: Economy rebuild is 'a marathon', not sprint

Biden: Economy rebuild is 'a marathon', not sprint

Developers hope their multi-million dollar subdivision could solve the housing shortage in the area.

Elko hospital restricts visitors due to rise in COVID patients

"We have seen an exponential increase in patients hospitalized for COVID-19 over the past few days, so this was the logical next step.”

The club wants the facility to be multi-encompassing and plans to put in a mug bog and dirt drags strip.

String of lights to reappear in sky as SpaceX satellites deploy

ELKO – Anyone who missed the spectacular trail of lights in the sky Thursday night may get another chance to see them, if it’s not too cloudy.

An honorary Picon Punch glass for President Donald Trump sits behind the bar at the Star Hotel, a basque restaurant in Elko.

Scott Ygoa, owner of the Star Hotel, a basque restaurant in Elko, poses for a portrait inside the bar.