The week before Thanksgiving, people who had been involved with the construction of the new water treatment plant at the Jerritt Canyon Gold Mine north of Elko gathered for a ribbon-cutting ceremony and an expression of gratitude.

“We appreciate everybody’s efforts,” Environmental Manager Mirinda Jones said. “We totally understand how much work you guys put in.”

“This was pretty substantial,” Jones said. “I know there were a lot of times when all of you were feeling the hammer just as much as we were. Genuinely … thank you for the hours you all put in.” She also thanked the family members of those who worked on the project.

The group was gathered under a tent in front of the big water treatment plant building filled with a complex array of piping, tanks, filtration systems, and other equipment. The $15 million project, which had been in planning and construction phases for years, was finally commissioned and up and running, treating water from the nearby process solution reservoir.

“This is huge, not just for us as a company, but really the industry,” Jones said. “You’re treating water that is so contaminated and so concentrated with minerals, and discharging water that’s so pure, we encourage you not to drink it.

“The efforts that went into that will create longevity here for who knows how many years.”

Kevin Small, Jerritt Canyon general manager and vice president of operations, said “I’ve worked at a lot of places with water treatment plants and this is probably one of the most technically complex plants I’ve ever seen … the reason being, we have 20 years of concentrated contaminants in our water.”

After all the thanks, various groups of people who worked on the project gathered in front of the plant for photos, and then there was a ribbon cutting with a pair of giant scissors in honor of the work accomplished.

Before the ribbon-cutting event, Project Manager George Tinkorang, who has worked at the Jerritt Canyon Mine since February 2011, talked about how the new water treatment plant works and what it will accomplish.

“They helped us through all of this process, right from the permitting stage up through construction and as-built submittal and the commissioning led by Linkan’s Process Engineer, Jason Wheeler,” Tinkorang said. “Jerritt Canyon’s piping construction team led by Chris Olive and the certified water operators — Dan Romero, Brent McEwen, Evan Champion, Thomas Knight and William Goss — did a fantastic job taking on a huge challenge during the last several months prior to final commissioning and startup.”

The plant is treating water from the mine’s milling process. When the tailings leave the mill, the solids settle, and the supernatant – the liquid above the settled residue – is pumped into the reservoirs.

“We currently have about 480 million gallons of water in the reservoir that needs to be treated,” Tinkorang said. “And that was the goal for this plant. We have built ponds and have been accumulating water, which the Nevada Department of Environmental Protection doesn’t want us to keep doing.”

“This treatment plant eventually will bring Jerritt Canyon into a zero-balance water inventory for the first time in the mine’s 30-year-plus history.”

Over the years, Tinkorang said, the contaminants in the reservoir water has become highly concentrated as supernatant stored in the evaporation pond has been circulated through the mill.

The water treatment facility was designed to process about 1,000 gallons per minute. Through the first quarter of 2020, it may process about 800 gpm as Jerritt Canyon works through the bugs in the system and deals with the first freezing temperature efforts of the entire systems.

Tinkorang said the plant will eventually get caught up and treat water faster than it is being produced by the milling process. In the meantime, the water treatment plant has been treating highly concentrated supernatant from the water storage reservoir.

“NDEP is going to be excited when that reservoir is empty,” Tinkorang said. “And we are lowering the levels already.”

“The water treatment project commenced in 2016 and a building foundation was constructed at that time,” Tinkorang explained. “However, there were several delays due to funding issues. Additional construction work was completed in mid-2018. A decision was made in late 2018 to move forward with the project again because our water levels were quickly rising.”

Instead of having contractors complete the project, a decision was made to have the mine’s maintenance team do all the piping, which took about six months.

“When all the piping was installed and the plant was commissioned,” Tinkorang said, “we determined that the water in the reservoir had become more concentrated with contaminants because the system was designed a few years earlier, and some adjustments had to be made. Reverse osmosis recovery reduced from 69% to 50% during commissioning due to worsened water quality. WaterSurplus field reps had to take out the high-energy recovery pressure exchanger devices that had been initially installed to exchange some of the high pressure within the system. This had helped reduce the initial pressure and lowered the operating/energy cost needed to operate the pumps in the reverse osmosis part of the system.”

The reverse osmosis is the core of the water treatment process, but the water starts out going through pretreatment steps in order for this process unit to be able to do its job.

First, sodium hypochlorite (NaOCl) and sodium hydroxide (NaOH) are added and allowed some retention time for heavy metal oxidation and pH adjustment up to about 9 to occur, respectively. Then ferric chloride (FeCl3) and sodium dimethyldithiocarbamate (NaDTC) are added for heavy metal absorption/coagulation and mercury precipitation, respectively. A total of 10 chemicals are used in the treatment process.

From this point, the water is pumped through an ultrafiltration system, which is a series of big vertical racks in the water treatment building. Sulfuric acid (H2SO4), sodium bisulfite (SBS) and antiscalant are added to the UF filtrate to provide pH adjustment down to around neutral, a chlorine neutralizer to protect the reverse osmosis membranes, and a scale control, respectively. Then the water is pumped through the reverse osmosis system.

“After the reverse osmosis, the water goes to an ion exchange system to help polish any excess mercury. Historically, water from the mill had high mercury levels, but mercury is now being captured upfront in the milling process, so mercury levels have gone down drastically,” Tinkorang said.

The treated water is then pumped into the finished water tank and finally conveyed into injection wells which are approximately 1,200 feet deep so the purified water goes back into the aquifer.

Reverse osmosis produces purified water and a concentrate. The Jerritt Canyon water treatment system was originally designed to have a 70 percent recovery, with 70 percent of the water coming out purified. However, because of the increased concentration of contaminants in the reservoir water over the past few years, the reverse osmosis is currently achieving about 50 percent recovery. The brine/concentrate which is a product from the reverse osmosis system has total dissolved solids of about 40,000 ppm, and is currently discharged into the lined evaporation pond. A brine pond is planned to be constructed in 2020/2021.

The new water treatment plant has a control room that houses the SCADA (supervisory control and data acquisition) system. On one wall of the room is a large cabinet filled with rows of circuits with instrumentation and control wires.

“This is the brain of the treatment plant,” Tinkorang said.

A desk with two human machine interface monitors sit in front of windows that look out at the water treatment plant equipment. Plant performance is monitored from the HMI screens.

“With this overview screen we are able to see what is happening at a glance,” Tinkorang said. “The operators go around and do checks on a very frequent basis to confirm what we’re seeing.”

“We have a very rigorous monitoring protocol with this project,” Tinkorang said. “Thanks to Zola Adje of the environmental engineering staff for keeping us up to date with the requirements of the UIC permit. The Nevada Underground Injection Control program requires some serious monitoring. We want to make sure we are discharging to permit limits on a constant basis, and that we are meeting all our requirements. So we have sampling locations where we monitor with all in-line analyzers as well as hand held meters.”

Tinkorang said he also wanted to thank Dwayne Ward and Tracy Duncan with HR, Cole Williams and his team with security and Neil Jenkins with IT for putting together and/or assisting to make the ribbon-cutting ceremony a success.

ELKO — Aitor Narvaiza, who was sworn in as the new sheriff of Elko County one year ago, said recently that he loves his career in law enforcement.

An important event occurred recently, an event that benefits landowners, land managers and amateurs like myself. Google Earth updated their ae…

Vehicles were from Oregon and Idaho 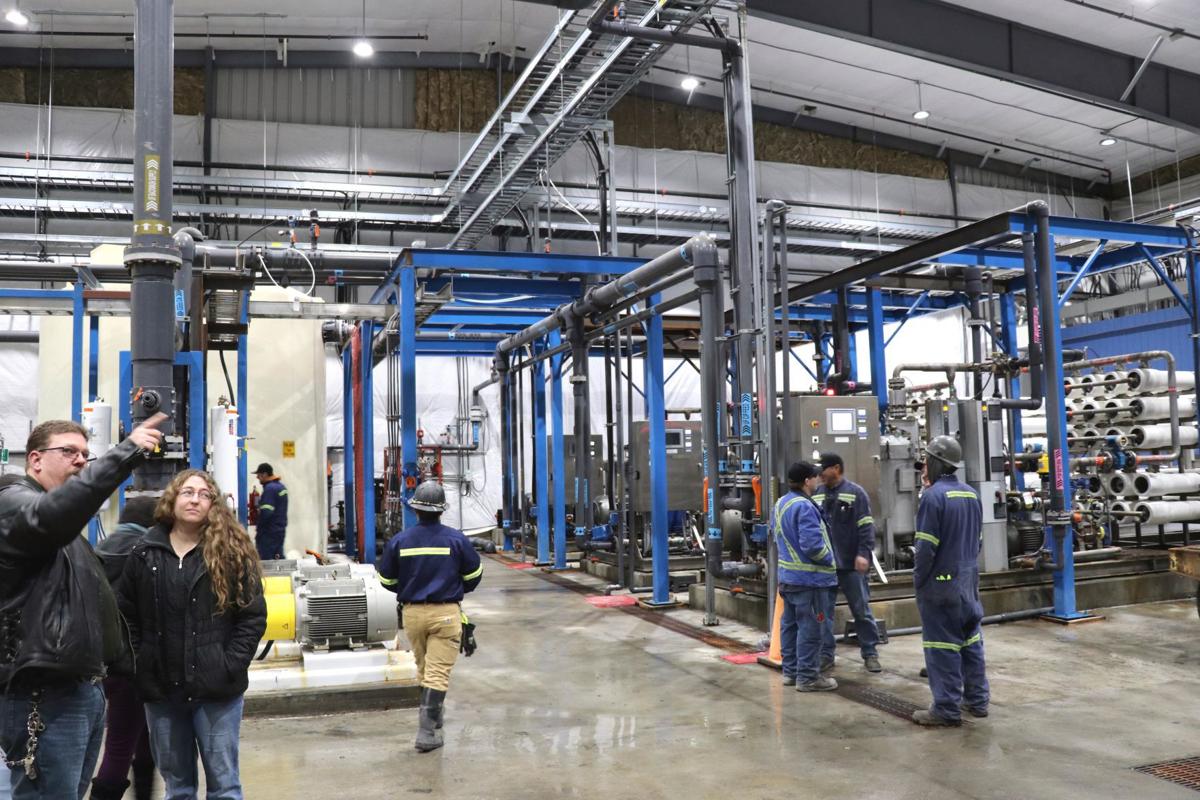 The people who gathered for the ribbon cutting ceremony for the new water treatment plant at the Jerritt Canyon Gold Mine north of Elko in November took a look around the new plant. 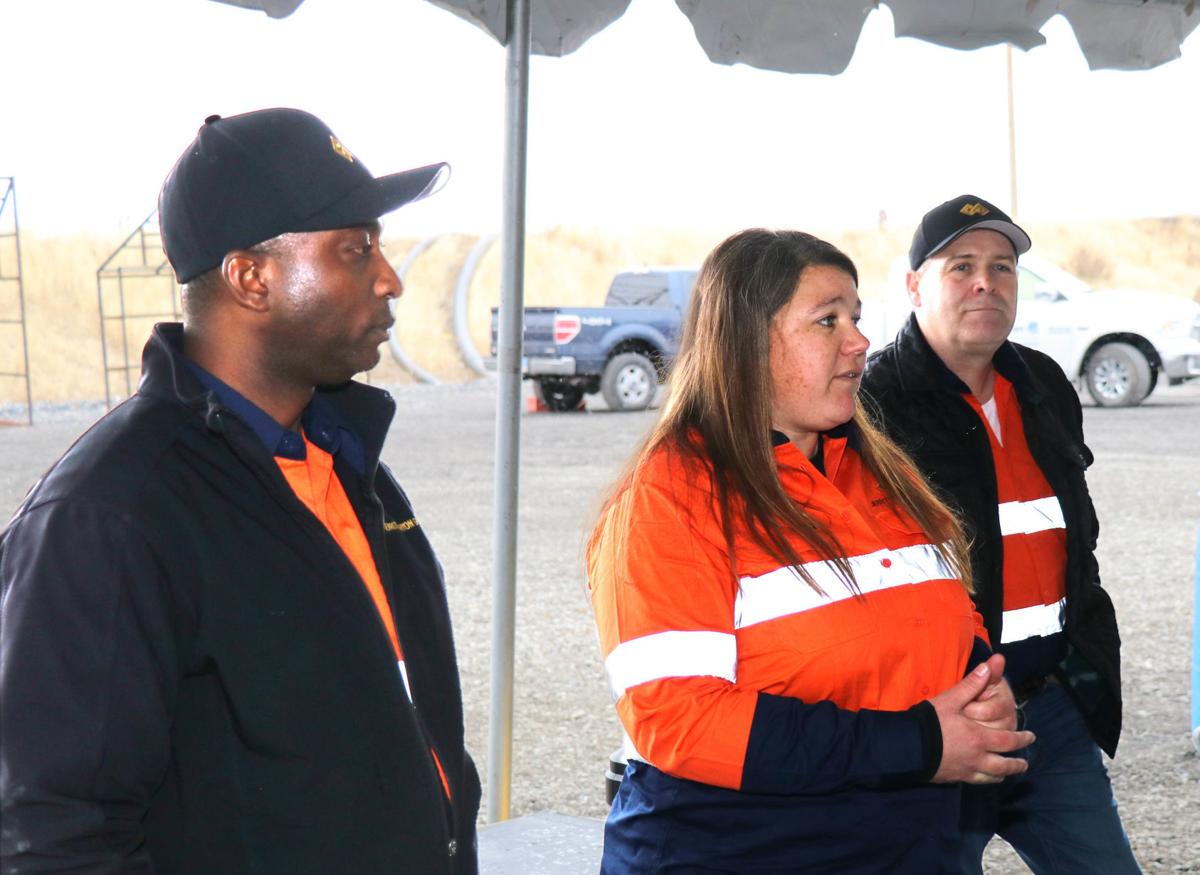 At the ribbon cutting for the new water treatment plant at the Jerritt Canyon Gold Mine in November, Jerritt Canyon Environmental Manager Mirinda Jones, center, thanked everyone for all the work they put into its construction. Project Manager George Tinkorang is on the left and Jerritt Canyon General Manager Kevin Small is on the right.