President Day Weekend’s Wild Horse Trout Derby was a big success, especially with the addition of a perch payout. Almost 500 people showed up over the two days and quite a few trout were caught.

Sunday saw Eli Harkness taking first place and $1,000 with the longest fish of the day at 22 ¾”, Chad Herman came in second on Saturday with a 22 ½” fish and Sergio Guzman took 3rd place with a 21 ¾ ” fish. Sunday’s perch winner was Shane Adams with a 12 ¾ “ fish and a $1,060 price which was better than the first place trout prize that day.

Next weekend is the fifth annual Elko Sportsman’s Expo at the Conference Center behind the Elko Civic Center. This is hosted by the Nevada Department of Wildlife and the Ruby Mountain Rios of the National Wild Turkey Federation.

There are a record number of vendors that cover interests from conservation, camo, boats, cars and trucks, campers, guns and a whole lot more. For the youngsters there is the very popular NDOW Kids Activity Room. There they will learn about Nevada’s wildlife, shoot archery or LaserShot, tie a fly and while supplies last decorate a wildlife t-shirt.

Unlike most outdoor shows around the West, this one doesn’t charge an entry fee, so come on down and check everything out at the Elko Sportsman’s Expo March 7 and 8.

As of Feb. 22, ice thickness averaged 14-17 inches depending upon location on the lake with very little slush. There were lots of anglers and the biologist for this lake measured 22 rainbows for an average length of just over 18 inches. Snow is expected on Saturday with accumulations in the area ranging from one to three inches. Both trout and perch fishing continue to be good both in size and numbers. If fishing for perch find water that is 30 feet or more in depth and fish within a foot of the bottom with a brightly colored jig tipped with a piece of worm or mealworm. Use an occasional jigging motion to bring the fish in. When fishing for trout, try to find depths of between six and 12 feet and start fishing about four feet below the ice and start moving the presentation down in the water column a foot at a time if you haven’t had any bites in about a half hour. Most anglers have been fishing Penrod and Hendricks Arms as well as the main body of water between them. The northern and southern parts of the lake have mostly been ignored, but should produce fish as well. Both perch and trout were being caught by a small group of anglers by the old road bed at the southern end of the lake. The State Park has groomed a very nice ice skating rink right off of the boat ramp and there is enough snow for sledding. The campground is open and on a first come first served basis.

The warm weather has ice receding at South Fork and on Feb. 27 the lake was mostly open water and the rest unsafe ice. Fishing has been slow to fair, though the fish being caught are nice ones averaging 18 to 20 inches and very fat. Along the northeast shoreline anglers can fish from shore as much of it is open water. There has also been some open water (at least in the afternoons) along Jet Ski Beach for shore fishing and the northwest end of the lake has open water for shore fishing. Fly fishermen have been catching trout using a variety of nymphs (black and red have been good colors) including gold ribbed hares ears taking some nice fish at the very south end of the lake. Wooly buggers, leech patterns and balanced leeches in black with some red have caught a few fish. Egg patterns are also working though their effectiveness is diminishing. Spin anglers should be trying dark colored spinners or minnow type imitations as well as worms or PowerBait. Rainbow colored garlic scented bait seems to be working the best. With low flows, fishing in the stream below the dam has also produced some fish though it has been slow to fair and fishing above the reservoir in the river has been slow.

The road to Wilson is very rutted and the lake is mostly covered in unsafe ice. The water level is rising and is causing a small ring of water around the edges, but no recent report as to whether there is enough open water for fishing. Probably not worth the trip at this time.

With the drier weather, the road in Ruby Valley has dried out and has been graded. Access to the valley is still through Secret Pass as Harrison Pass is snowbound. The collection ditch is ice free. Water levels in the collection ditch are low and clear and fishing for trout is fair to good depending upon the day. Anglers report catching mostly 10- to 14-inch fish in many areas, with a few 15- to 20-inchers thrown in every once in a while. Stormy, windy or cloudy days seem to be the best. Anglers would do well to target areas where springs flow into the ditch or around culverts that create some flow between the ditch and the units. Very small dark flies fished dry or just under the surface and egg patterns have worked as have streamers and spinners. In other words, BWO (blue wing olive) emerger and dry fly patterns, Griffith’s gnats and ants. Anglers should also plan to use the usual small nymphs such as PTs, hares ears, olive soft hackles, red or blue copper Johns and prince nymphs in sizes from 14 to 18. Wooly and crystal buggers in black, purple or olive are also working.

Jakes Creek is still covered with approximately eight inches of ice but the reservoir is starting to fill which is starting to produce a ring of water around the edge. Fishing has just been fair using PowerBait or worms.

CCR is mostly open water and much of the reservoir open to shoreline fishing. Anglers should be able to catch trout on a variety of tackle including spinners, wet flies, nightcrawlers, and powerbait.

Access to the lake is now permitted. However, the ice is starting to break up with a bit of open water by the inlet and anglers are encouraged to stay off the ice.

The reservoir remains at capacity and ice is sitting at 6 to 8 inches of ice. With the warm sunny afternoons there is some variation in ice depth, especially were the creek comes into the lake and anglers should use caution when fishing this area. With the warmer temperatures, it is time to start drilling test holes as you venture upon the ice here as a precaution. Anglers will do well on nightcrawlers, mealworms, a variety of jigs, wet flies, and powerbait.

With low flows and cold water, fishing is slow on most streams. The trick is to slow your presentation down. Snow and ice buildup along shorelines make walking along streams treacherous. Nymphs and small streamers should be working, though expect bites to be very subtle in the cold weather. On warmer cloudy afternoons, blue wing olive emerger and dry fly patterns may be worth a try. Many gauging stations are inoperable due to ice. As of Thursday, February 27, the Bruneau and Owyhee River stations were showing ice and expect fairly low flows on each. The Jarbidge River is also iced over but was flowing at 7 cfs last week. To get to the Bruneau or the Jarbidge, you must come from the Idaho side of the state line. Salmon Falls Creek is down a bit at 77 cfs, Lamoille Creek is iced over, South Fork of the Humboldt at 44 cfs, Cleve Creek flowing at 7.5 cfs and Steptoe Creek at 4 cfs. Big Creek near Austin doesn’t have a gauging station, but fishing for brown trout here has been fair to good.

ELKO — A third confirmed positive case of COVID-19 has been reported in Elko County, and Humboldt County reported its first case, making it th…

ELKO — Nevada’s number of coronavirus cases topped 500 but the death toll remained at 10 on Thursday.

ELKO — Hundreds of vehicles lined Idaho Street Saturday evening to honor a state trooper killed in the line of duty. Some wept while others pl… 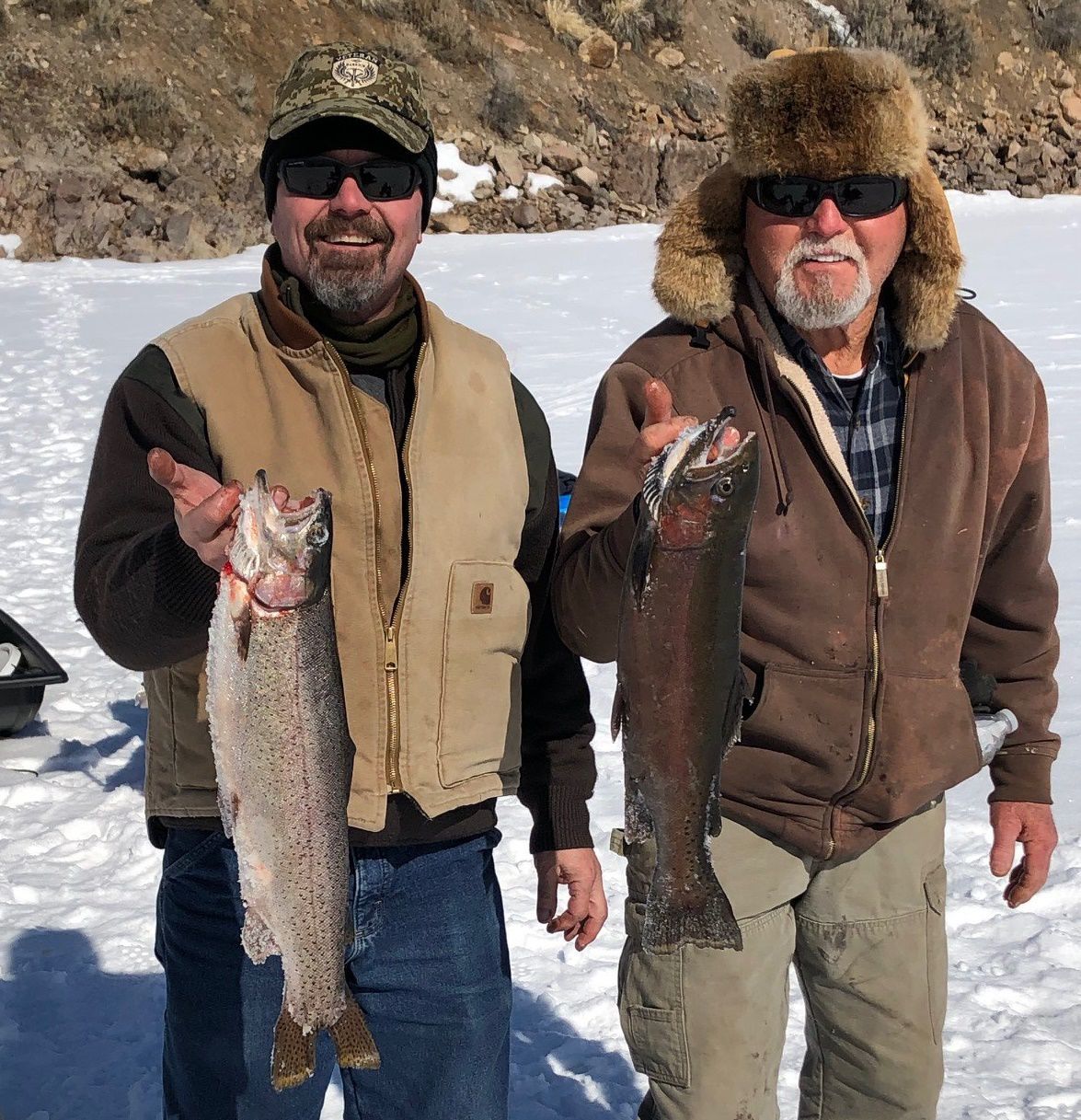 Elko anglers Mike Browning and John Crayner proudly show off two beautiful trout at Wild Horse. Both fish were over 21 inches long and three pounds each. Ice is still around 15 inches and more than 20 trout were checked averaging a healthy 18 inches. The average length for a perch that day was about 10 inches.