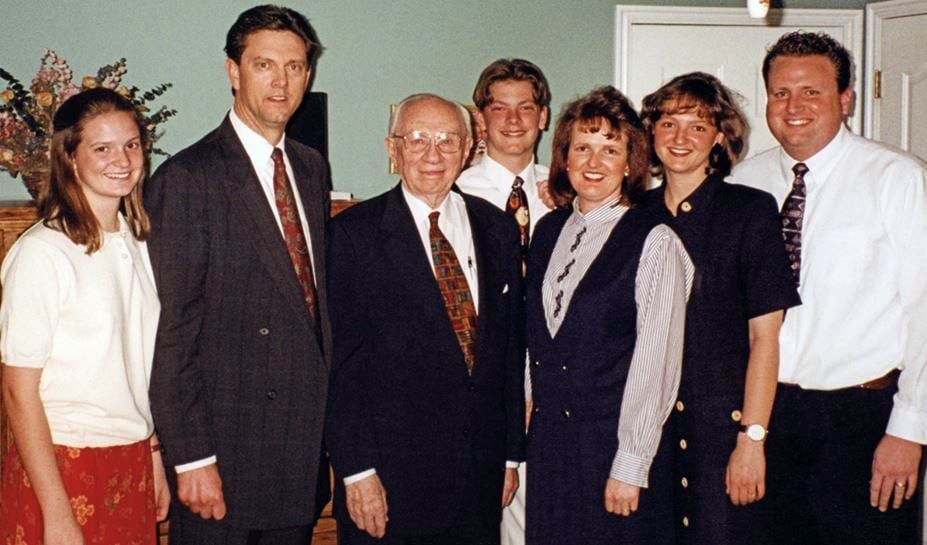 Church of Jesus Christ of Latter-day Saints President Gordon B. Hinckley with West Stake President Kurt Alleman and his family in 1997. 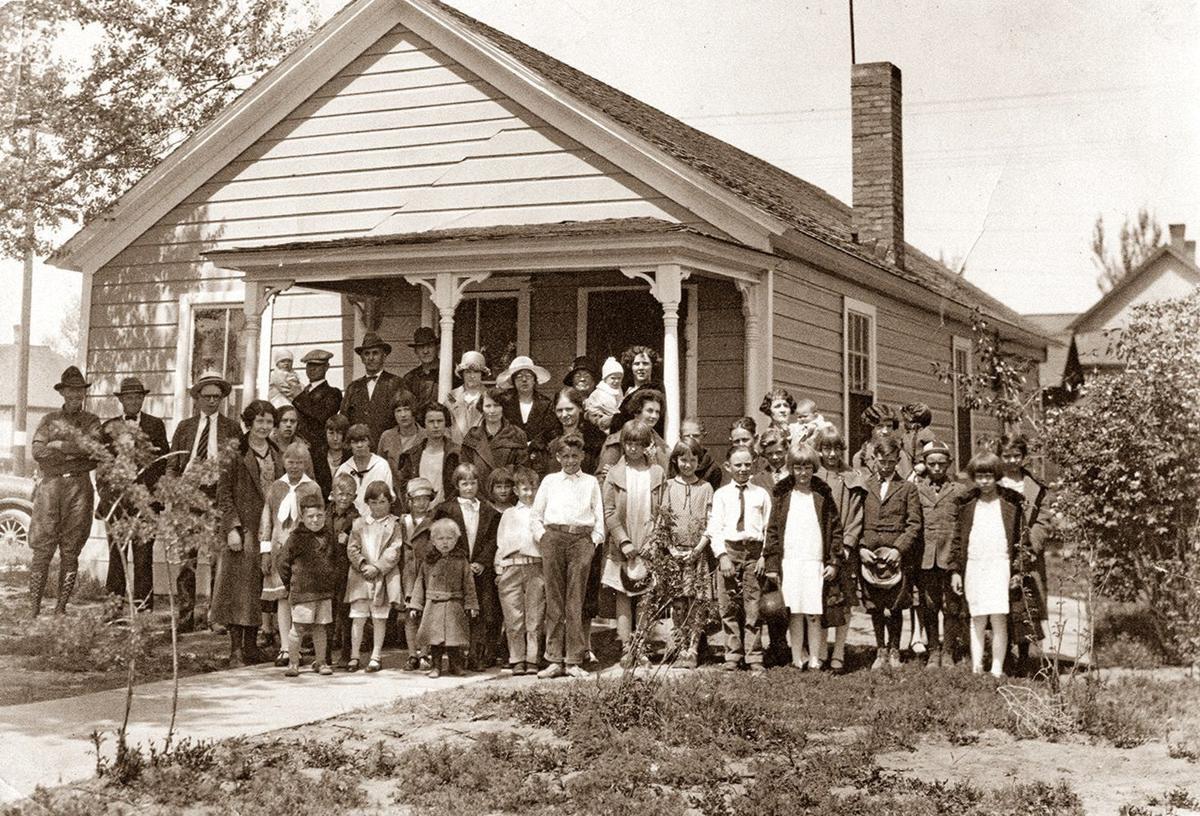 The first meeting of Latter-day Saints members in Elko was in August 1921. This photo shows the first building used from 1923-28.

As has become customary with President Russell M. Nelson, president of The Church of Jesus Christ of Latter-day Saints, in his final address of the Worldwide General Conference of the Church held in April and October each year, he announces new temples to be constructed. This year’s April conference was no different, except he announced 20 new temples — the second largest number of temples announced at one time — and one of those would be constructed in Elko, Nevada.

This announcement was received with gasps and screams of jubilation and tears of happiness by members of The Church of Jesus Christ living in Elko and surrounding communities in Northeastern Nevada, as well as many members who once lived in the area, as a temple in Elko has been prayed for, for many, many years.

In April 1997 a regional conference was held in the Spring Creek High School for members of the Church in Elko, Ely, Winnemucca and surrounding areas. It is reported that 4,900 people attended the conference, with many more being turned away because there was no room available for them in the building.

At the regional conference then-President of the Church Gordon B. Hinckley said that “someday” there would be a temple in Elko.

Although it has been 24 years of waiting, most members thought that day was still a long distance in the future. However, at each conference they waited for the announcement of new temples, hoping to hear “Elko, Nevada.”

As soon as President Russell M. Nelson announced, “Elko, Nevada,” this Easter Sunday, personal and church congregation’s social media feeds lit up, sharing the news and excitement that there would finally be a temple in Elko. Here are some of the responses:

On Easter Sunday upon learning our Church leaders have decided to build a temple in Elko my wife and I were so surprised — perhaps “shocked” would be a better description.

Temples are very special to our members. In these sacred buildings we make covenants that enhances our relationship to Jesus Christ and greatly strengthens our desire to faithfully serve Him. If kept, these covenants are in force not only in our earthly life but extend into eternity.

Kathy and I were surprised some years ago when a temple was erected in Twin Falls, the closest one to Elko. Once the Elko Nevada temple is completed, we can enjoy the temple experience without having to travel to Twin Falls, Reno or Salt Lake City. What a tremendous blessing this will be to all of our members.

We remember a prophet telling us this was possible many years ago and now we see the revelation is beginning to be fulfilled! We believe in miracles and know this will be a blessing to our whole community!

Jeffrey and Sariah Knight and family

It’s an answer to our family’s prayers.

I am overjoyed at President Nelson’s announcement that we get a temple to bless the people of Elko! I look forward to being able to serve and worship as often as I can in the Holy House of the Lord! How grateful I am for this incredible blessing!

I couldn’t believe that the day had come for a temple to be in Elko. When President Hinckley was asked if we could have a temple in Elko back in 1997, he gave a requirement that needed to be met before we would qualify. We needed a total of 10,000 active members in the temple district.

ELKO — Although Nevada was part of Utah Territory until it became a state in 1864, it wasn’t until 1942 that the Church of Jesus Christ of Lat…

The whole time I lived in Elko and worked with the Ely and Winnemucca Stakes, we could only count about half that amount. So, I kept believing that someday we’d have sufficient numbers to qualify, since President Hinckley said that “someday” we’d have a temple. When I heard the announcement yesterday, I couldn’t hold back the emotions of joy and surprise and thankfulness.

What a great privilege it will be to have a sacred temple in the town that I love. I believe that Elko will be greatly enhanced as a community and blessed for the great work that will be done in the temple. I miss all of the great people of Elko and look forward to seeing the temple upon completion.

(Alleman served as the first Stake President of the Elko Nevada West Stake from 1995-2004. He recently retired and moved from Elko.)

We were overjoyed when the announcement was made. Having lived on the East Coast where the closest temple was a 10-hour bus ride away, having a temple in our backyard will be a life-changing blessing for my family.

It will even be a blessing for the local economy. I’m sure people will come from Ely, Winnemucca, Austin, Eureka, Battle Mountain, Wells, etc. and they will shop in Elko while they are there.

It was a surprise but shouldn’t have been, I guess, because President Hinckley prophesied that it would come.

We are thrilled beyond measure with the announcement of a temple for our wonderful Elko community.

Over the past couple years a few of our youth have been anxiously engaged in genealogical and family history work. They have come to feel of the importance of the lives of ancestors who have gone before and lived a life that strengthens our communities and ultimately our family today.

We know that temples are sacred structures where heaven connects with earth, and the work done there allows us to connect with and strengthen our family ties with these ancestors because of covenant promises made through our Savior, Jesus Christ.

My joy is especially great for our youth who desire to go to the temples and feel of the peace that exists in a house of the Lord. One of our young men in our congregation said he is “just so excited to have a temple so close.” I know that a temple in Elko will be a great blessing for our community.

(Smith is currently serving as the bishop of the Elko 4th Ward.)

The prospect of one day having a temple in Elko has been in the hearts and minds of members of The Church of Jesus Christ of Latter-day Saints in northeastern Nevada for many years. Now to hear the announcement that we are to have one is like a dream come true and an answer to many prayers.

To be able to attend and serve in a temple without being required to travel hundreds of miles will surely bring blessings and joy into the lives of many individuals and families.

When I think about a temple being built, and the growth and progress of the Church in the Elko area over the past 60 years — from the time when I was the bishop of the only ward (congregation) in Elko — which included Elko, Spring Creek, Meadow Valley, Ryndon, Osino, Tuscarora, and Lamoille — to now; I think the temple will be the icing on the cake.

Dozens of teaching positions are available throughout the Elko County School Distirct.

ELKO – Addressing citizen complaints about the city’s rules regarding sheds, Elko city staff has come up with a twofold change in codes that s…

“The Basque Club is so excited to host the National Basque Festival,” said club member Kassidy Zaga Arbillaga. “We missed celebrating with the Elko Community in 2020 and are looking forward to seeing everyone in a few short months. This year the National Basque Festival will watch for schedules and updates via our Facebook page, Elko Euzkaldunak Club or on our website, www.elkobasqueclub.com. Come enjoy some good food, cold drinks and watch traditional dances and games.”

Church of Jesus Christ of Latter-day Saints President Gordon B. Hinckley with West Stake President Kurt Alleman and his family in 1997.

The first meeting of Latter-day Saints members in Elko was in August 1921. This photo shows the first building used from 1923-28.