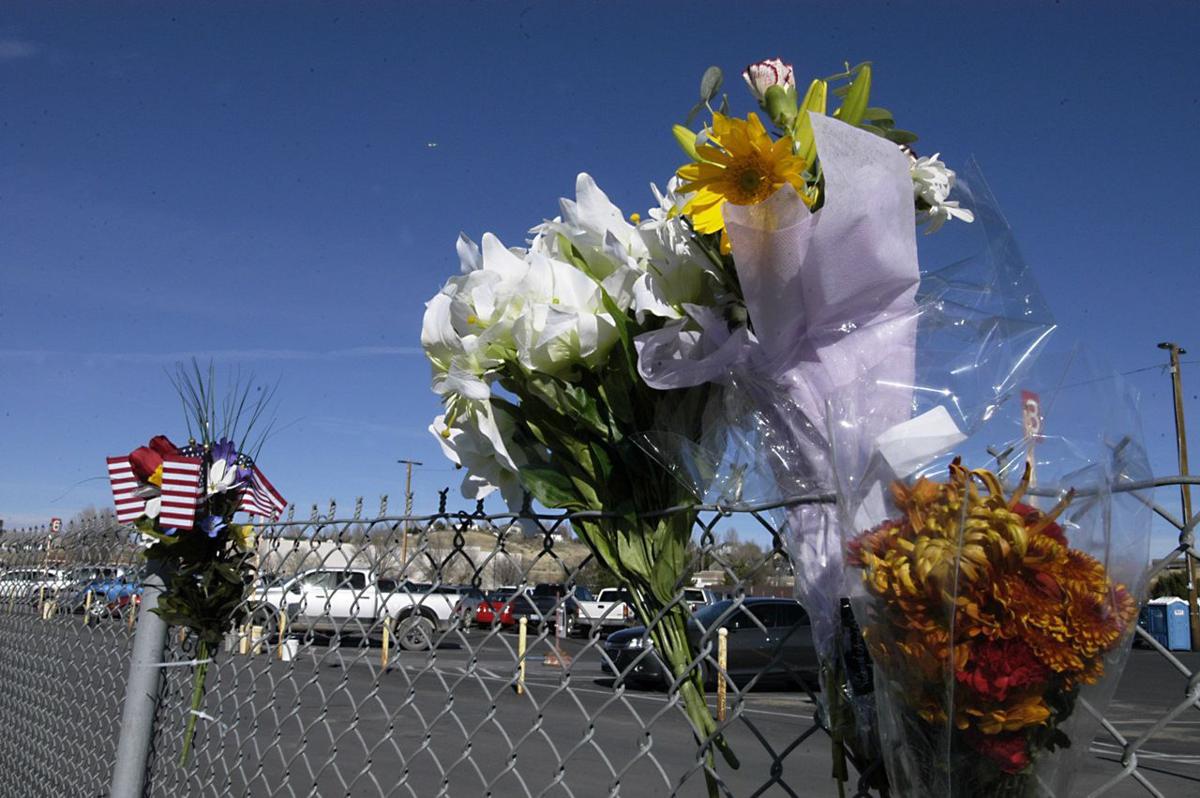 Flowers are placed on a fence near the scene of Friday night's fatal crash of an American Medflight plane, which killed all four aboard. 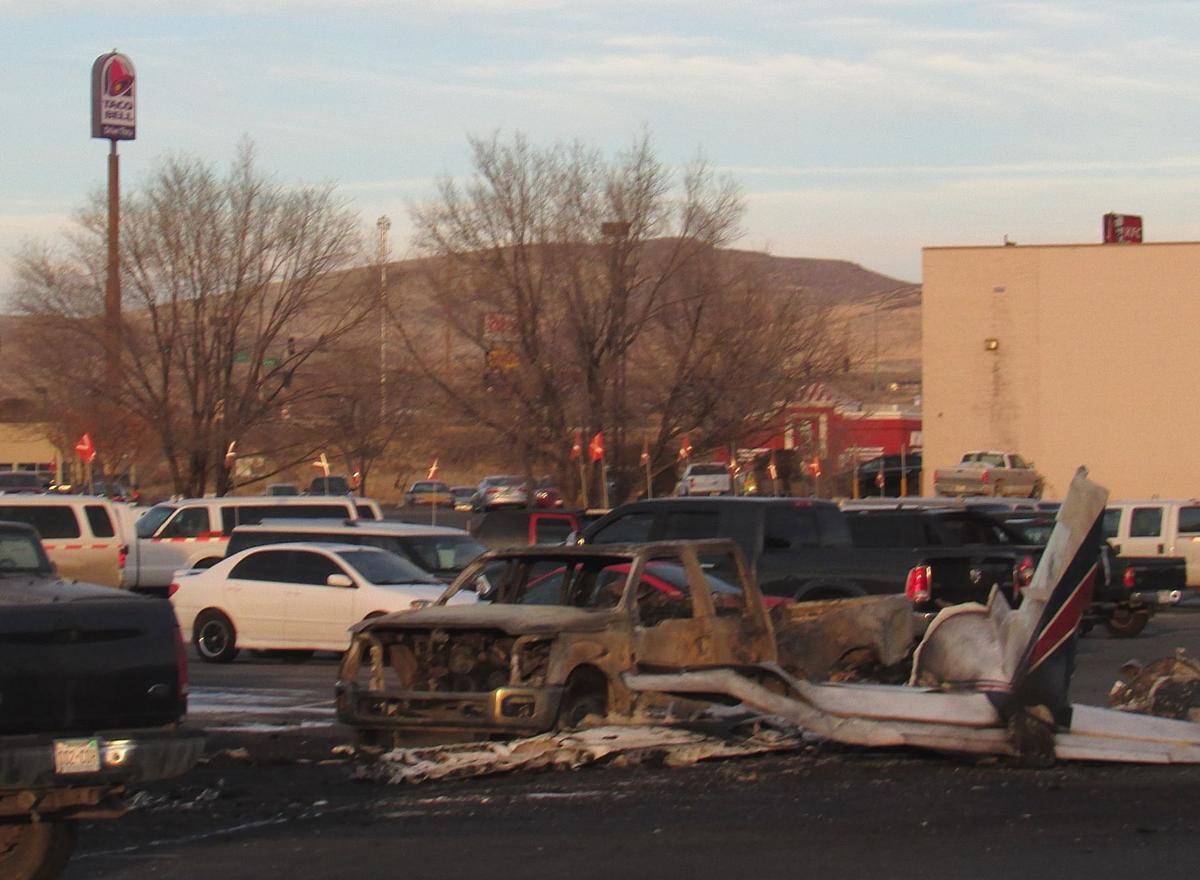 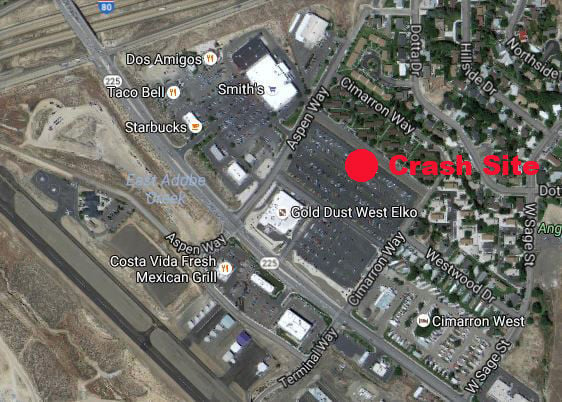 The crash site is surrounded by commercial and residential development near Elko Regional Airport and Interstate 80.

Clohesey was being transported to the University of Utah Medical Center because of heart problems, according to his doctor.

Authorities are still trying to determine why the plane crashed after takeoff from Elko Regional Airport around 7:30 p.m.

“What we do know is that an American Med Flight described as ... Cheyenne Twin Engine Piper II, took off in a northeasterly direction headed to Salt Lake at around 7:30 p.m.,” said Police Lt. Rich Genseal. “As the plane climbed we believe at this point it experienced mechanical problems. We are not sure if it lost power or an engine. We know it lost altitude and crashed in the Barrick parking lot.”

Police Chief Ben Reed said that one minute after taking off, the plane made a sharp turn and fell to the parking lot.

According to Genseal, the plane was engulfed in flames upon impact.

Residents and law enforcement were saddened by the loss and deeply affected by the fact that both Urristi and Clohesey were locals.

“Tiffany was one of our volunteer firefighters,” said Fire Chief Matt Griego. “It hits home.”

At the time of this writing, little was known about Clohesey other than that he was a Spring Creek man and was the patient.

“The plane came down several hundred feet before an apartment complex,” said Genseal. “The parking lot was empty of people at the time.

Genseal also mentioned that a hotel and casino are nearby the parking lot where the plane came down. He also said it was fortunate that Barrick Gold Corp. employees had all boarded the buses and left the vicinity before the crash.

A number of vehicles were destroyed by the crash.

“A lot of us knew either one or multiple members on this plane. It pulls at the heart strings,” said Genseal.

“It’s neat to see the community turning out and putting out flowers,” said Genseal. “Their attitudes toward law enforcement that have been here all night supplying coffee and doughnuts and stuff to eat. It’s huge, because they understand the magnitude of it.”

“At first we were told of explosions,” said Griego about the tragedy. “They were updated en route that in fact there was an aircraft down in the parking lot.”

One engine pulled near the apartment complex and the other proceeded into the parking lot to attend to the blaze and rescue attempt, Griego said.

“There was a very intense fire when firefighters arrived. There were multiple explosions. Engine one parked near the apartments to isolate any flames and the other engine proceeded into the parking lot to attend to the fire to do direct attack on the fire.

“We had approximately seven vehicles as well as the aircraft involved in the fire.” It was a pretty extensive fire when the crews arrived, he added.

Griego went on to mention Urresti’s involvement with the volunteer fire department and her father, Jimmy, has been with the department 30 years.

“It hits home. The crew is coping as well as they can.”

Urresti, 29, was known statewide for her service and Griego said there has been an outpouring from all over the state

Law enforcement said that they are still processing the scene and will document vehicular damage so people can report evidence to their insurance agents.

Genseal said the Federal Aviation Administration is on the scene and that someone from the National Transportation and Safety Board is en route.

Northeastern Nevada Regional Hospital has been offering counseling for those impacted by the crash, according to spokseman Steve Burrows.

“We are in shock and deeply saddened by yesterday’s plane accident,” said a statement from the hospital. “We are in contact with the local authorities who are investigating this matter and we must direct any inquiries to them. Our thoughts and prayers are with those impacted by this tragedy.”

Lifting mask mandate too soon for some in Houston

Lifting mask mandate too soon for some in Houston

US urging China to help with Myanmar violence

US urging China to help with Myanmar violence

ELKO – A federal report filed this week included a witness account of the American Medflight plane crash on Nov. 18, which killed all four peo…

A look back at the American Medflight crash

ELKO — A federal report included a witness account of the American Medflight plane crash on Nov. 18, which killed all four people aboard.

Flowers are placed on a fence near the scene of Friday night's fatal crash of an American Medflight plane, which killed all four aboard.

The crash site is surrounded by commercial and residential development near Elko Regional Airport and Interstate 80.