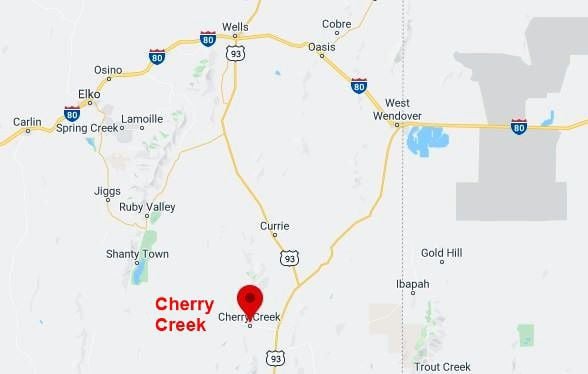 The shooting suspect was apprehended near the ghost town of Cherry Creek. 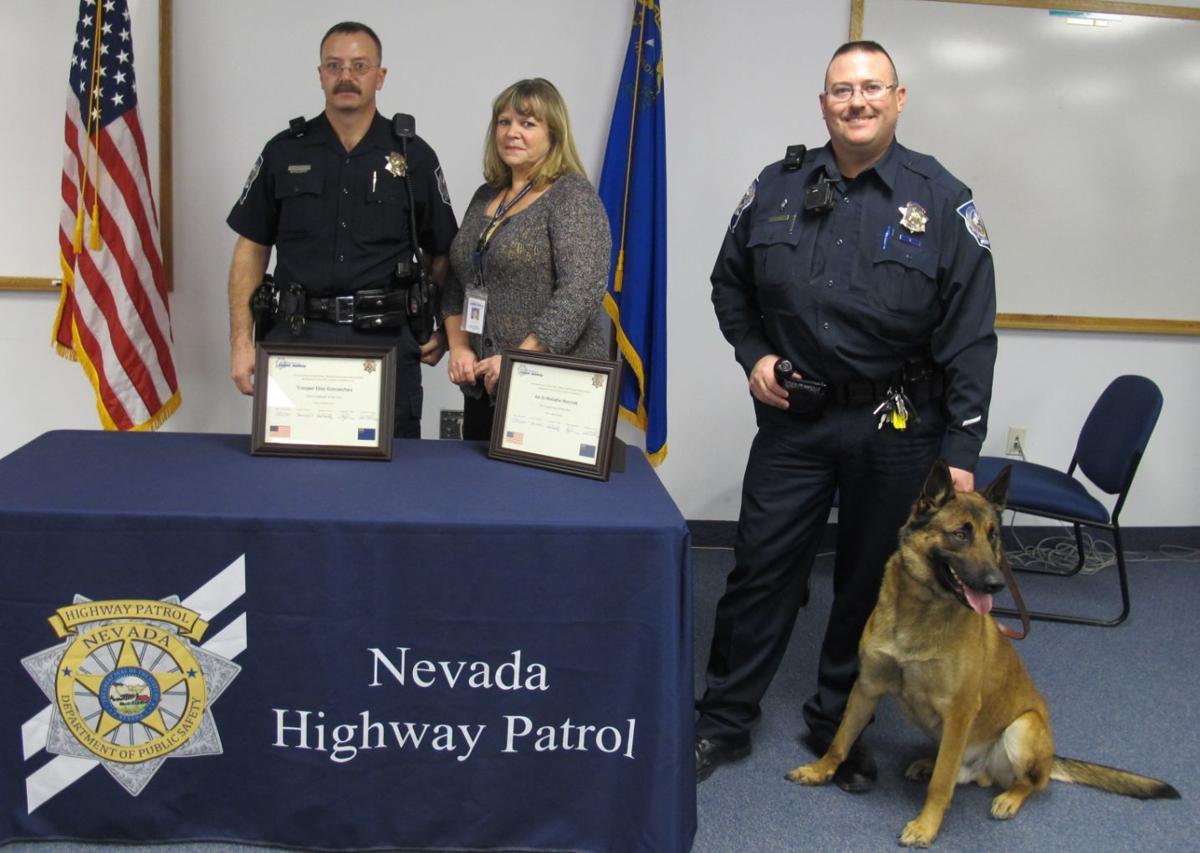 Trooper Elias "Choch" Goicoechea, left, was Nevada Highway Patrol's 2014 Employee of the Year. Melodie Wornek, center, was Supervisor of the Year. At right is Trooper Ben Jenkins with K-9 Thor, who retired in September. The three were honored during a January 2015 ceremony at the Elko NHP office. 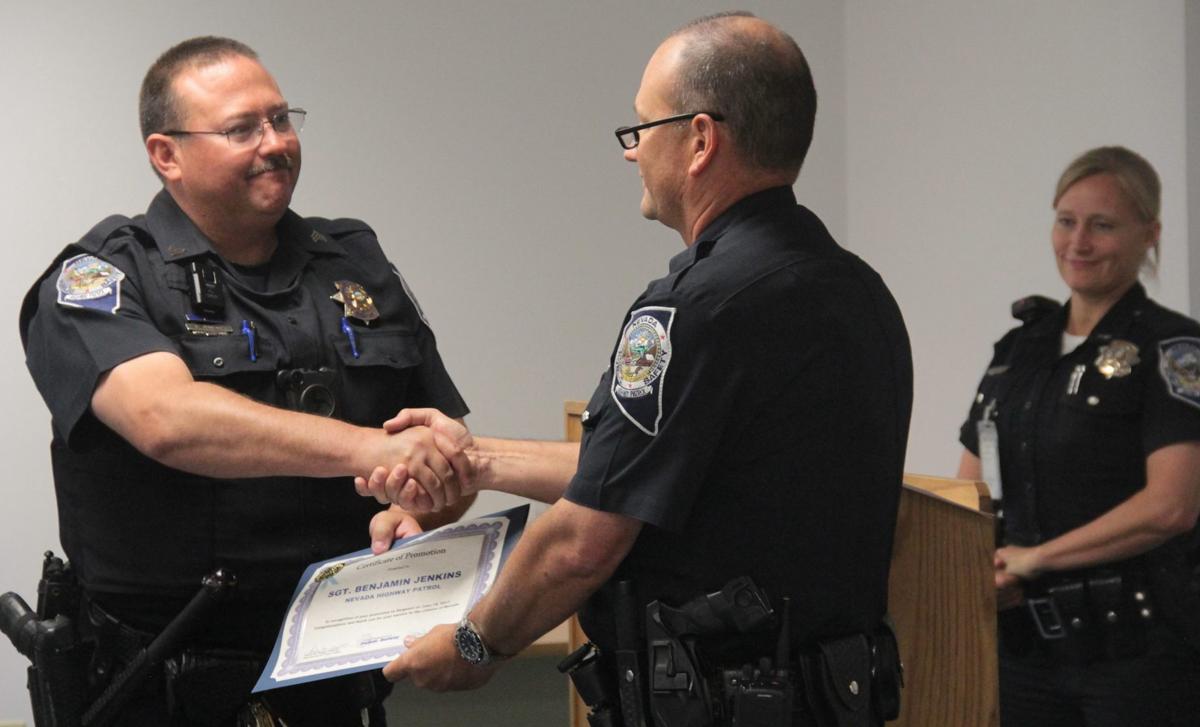 “We are devastated to report that Sgt. Ben Jenkins was killed in the line of duty this morning,” NHP Northern Command stated. “He had stopped to assist a motorist on US-93 in the White Pine county area and was fatally struck by gunfire.”

The motorist stole Jenkins’ uniform and fled the scene in Jenkins’ patrol vehicle, the NHP reported. Following a search that lasted several hours, the suspect was located and taken into custody with the assistance of multiple agencies.

Jenkins, 47, was an Elko native who devoted his life to public service and to serving Nevadans. He began working for the Highway Patrol in March 2008 as a trooper in Jackpot and was promoted to sergeant in Elko in 2017.

In 2011, Jenkins received the Nevada Department of Public Safety’s highest honor, the Gold Medal of Valor, which is presented to officers who perform an extraordinary act of heroism.

He is survived by his wife, his mother, four children, and five grandchildren.

“This is a time of tremendous grief for our agency, his family and our communities,” stated NHP. A memorial service is pending and that information will be forthcoming at a later date.”

Dabritz had left a box containing notes at the White Pine County Courthouse on Tuesday, according to a county official.

“The reporting party discovered a box outside their workplace that contained several notes, which they believed to be threatening,” stated a blotter report posted Wednesday on the sheriff’s office Facebook page. “The letters and box were examined and nothing was found that would be construed as a threat.”

According to court records, Dabritz filed a breach of contract lawsuit in October against a real estate agent regarding a purchase he had made in Ruth. When he took possession of the property an electrical generator engine was missing, his suit claims.

Dabritz states in his lawsuit that he has “lived off the grid for 30 years and a gen set is essential,” and that he needed it to work a mine he had purchased. He estimated its value at $15,000.

The 7th Judicial District Court in Ely granted a motion on March 6 to stay proceedings in the case pending mediation.

Ely Times reporter Kay Lynn Roberts-McMurray told the AP that Dabritz had attempted to purchase a full-page ad in the newspaper on Monday. She said she reported to White Pine County sheriff’s deputies that he appeared confused.

“Dabritz told her he had spent time in mental health treatment in Las Vegas, that he was a former nuclear scientist, and that he had a flash drive with information about the worldwide spread of new coronavirus,” AP reported.

ELKO – The Nevada Highway Patrol promoted one trooper and said goodbye to another Thursday in a ceremony honoring both officials.

ELKO — Three Nevada Highway Patrol employees — including one K-9 — were honored during an awards ceremony on Tuesday.

Funds set up for family of slain officer

ELKO – Two accounts have been set up for the family of slain Nevada Highway Patrol Sgt. Ben Jenkins, who was killed early Friday morning by a …

Man charged with murder in death of NHP sergeant

ELY – A man accused of killing a Nevada Highway Patrol trooper will undergo a psychiatric evaluation to see if he can stand trial.

Celebration of life for NHP trooper set for July 8

ELKO – The public is invited to a celebration of life for slain Nevada Highway Patrol Trooper Sgt. Ben Jenkins on July 8.

‘Blue Collar Adventures’ teams up with Nevada Outdoorsmen in Wheelchairs

ELKO — Jay Presti lives a long way from his native homeland of Lamoille.

The shooting suspect was apprehended near the ghost town of Cherry Creek.

Trooper Elias "Choch" Goicoechea, left, was Nevada Highway Patrol's 2014 Employee of the Year. Melodie Wornek, center, was Supervisor of the Year. At right is Trooper Ben Jenkins with K-9 Thor, who retired in September. The three were honored during a January 2015 ceremony at the Elko NHP office. 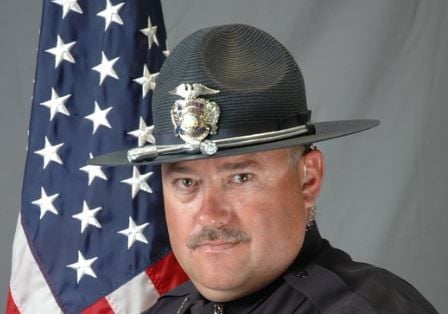