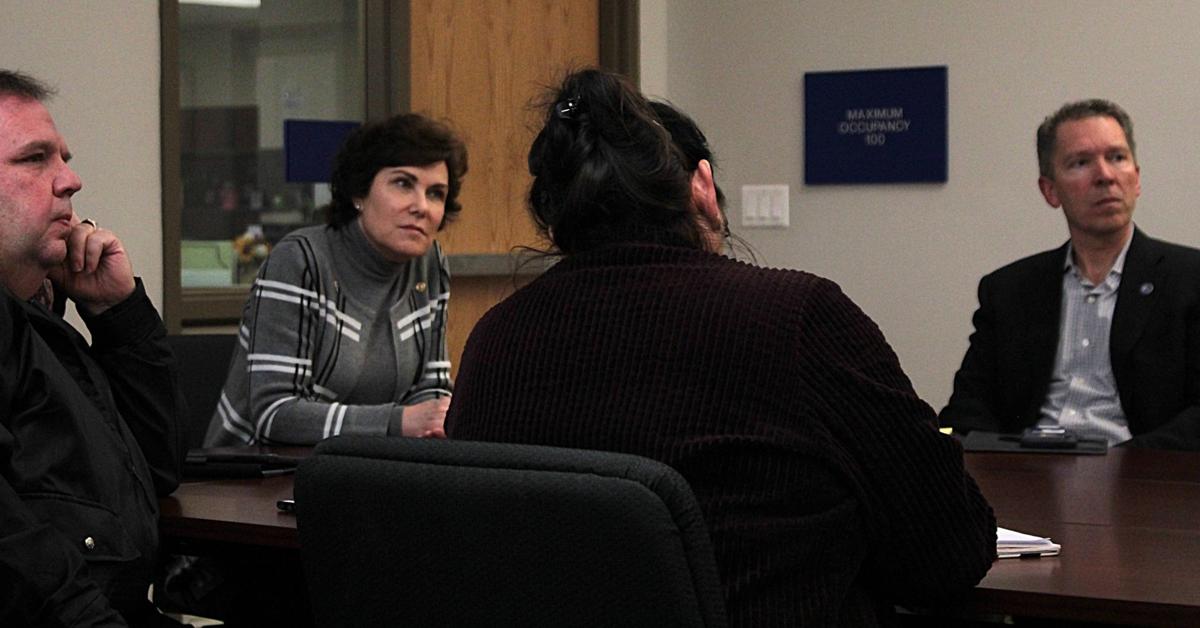 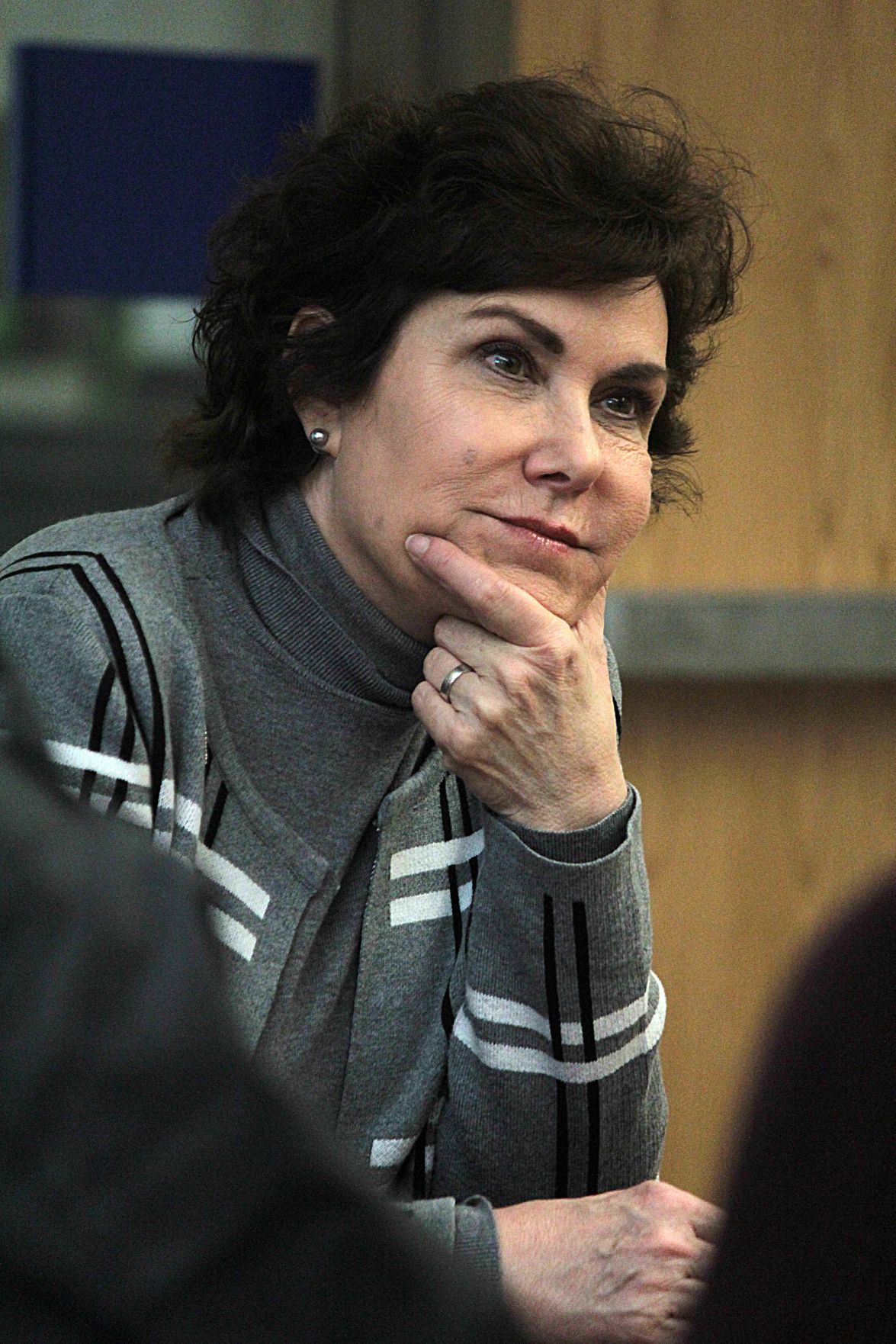 U.S. Senator Jacky Rosen listens to a member of the Broadband Action Committee during their bimonthly meeting on March 20. 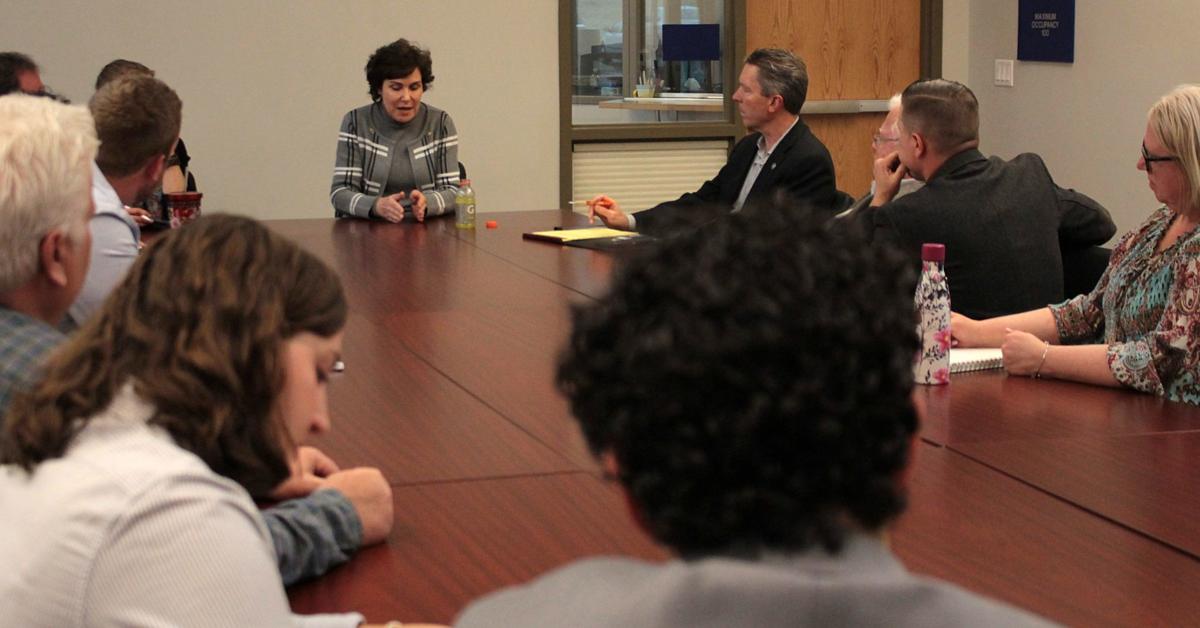 U.S. Sen. Jacky Rosen speaks during a meeting of the Broadband Action Committee on March 20 in Elko. Rosen's visit came during her tour of rural Nevada this week.

ELKO – When it comes to high-speed internet, Northeastern Nevada Regional Hospital takes no chances — especially with large radiology files that must be transmitted online to providers either down the road or hundreds of miles away.

Because of the fear of losing connectivity when sending such files, NNRH uses three local internet providers to ensure a timely delivery, said Jeff Morgan, IT director for the hospital.

In Owyhee, the Shoshone-Paiute Tribe is concerned that losing connection to a provider in Idaho could leave the community stranded during fire season, or without access to online education and medical resources.

Struggles with internet providers were among the topics discussed by members of the Broadband Action Committee that included a visit Wednesday evening from U.S. Sen. Jacky Rosen, D-Nev.

Rosen, traveling through rural Nevada this week, sat in on the committee’s meeting as part of a “listening tour” to learn where Elko County and other rural areas are in their efforts to develop stronger bandwidth and infrastructure for entities that are nearly or wholly dependent on internet for multiple uses.

“What are your biggest challenges?” Rosen asked the committee. “What’s a concrete thing I can take back and try to find a grant, find a way to do it, find some way to put a piece of legislation in?”

Keener summed up the committee’s purpose since being formed about 18 months ago, stating that a survey by the Governor’s Office for Science, Innovation and Technology identified Elko and White Pine counties as “needing the whole community approach.”

“That’s why we’re all here,” Keener said of the committee members. “We’ve been left behind; our community has, Elko County has, rural Nevada has.”

Among the challenges discussed was the lack of internet providers to create competition, said Jeff Morgan, IT director for Northeastern Nevada Regional Hospital.

Right now, NNRH must use three separate internet providers because of problems with connectivity, said Morgan, especially if a fiber optic cable is cut and internet service is down throughout the city.

The hospital mainly transmits large radiology files, Morgan said, which is “a large portion of our broadband use. We have to have it.”

“We don’t rely on just one provider,” Morgan continued. “We have Frontier, Rise Broadband and another backup. We have lots of redundancy.”

One plan to increase broadband through the proposed leasing of dark fiber has stumbled, said Troy Poncin, City of Elko’s information systems manager.

“Leasing those fibers to companies has proven difficult. The state is making it difficult for us to lease our resources,” Poncin said, explaining that an appraisal was required by the state before it could be leased.

“We’re ready and willing. We’d love to help this area,” Wiscombe said. “We like to serve the underserved. We have a lot of people here in Elko.”

Attending the broadband consortium, Reed noted that the new system connecting Elko County’s three dispatch centers must have the technology to read data packets that contain the names, phone numbers and locations of calls made to 911.

“We can’t receive or read that data packet,” Reed explained, “Whether it’s [a call made on a] hard line, mobile or VoiP system.”

With $432,000 in grants secured last year to go toward the new system, the E-911 board is accepting vendor proposals until March 28. After the proposals are evaluated, the board will give its recommendation to Elko County Commissioners.

Reed said the call-handling equipment would be operational in late 2019, which is only the first step of getting Next Gen online.

“This is one very serious component … [but there is] a whole bunch of technology that is lacking in dispatch centers,” Reed said.

Every second counts when there’s an emergency, Reed explained, and with Next Gen able to locate mobile phones on large ranches or on mine sites with multiple buildings, “technology is critical to be able to receive the calls the proper way and then translate that into what first responders need to know.”

SPRING CREEK — Internet access for Spring Creek residents is one of the topics the Spring Creek board of directors will tackle Wednesday evening.

SPRING CREEK – Could high-speed internet be in Spring Creek’s future?

It's been four years since Spring Creek embarked on a quest to find reliable internet service.

'Concerning' asteroid will break into Earth's orbit in a week: NASA

U.S. Senator Jacky Rosen listens to a member of the Broadband Action Committee during their bimonthly meeting on March 20.

U.S. Sen. Jacky Rosen speaks during a meeting of the Broadband Action Committee on March 20 in Elko. Rosen's visit came during her tour of rural Nevada this week.