ELKO – The school district is at a crossroads when it comes to fighting any mask mandate, according to two legal opinions unsealed to the public.

The Elko County School District and the Board of Trustees could face fines, penalties and lawsuits if they vote to bypass the state’s regulations. But if the state were to withhold or remove funding from schools to enforce the mandates, it would violate the Nevada Constitution.

Trustee Candace Wines requested the opinions May 25 after concerns were raised by parents, students and community members when revised guidelines allowed younger elementary children to attend school without a mask, excluding older students.

Also in response, the school board wrote a letter asking Gov. Steve Sisolak to relax restrictions for schools and consider allowing school districts to form their own mask policies.

The opinions were written by Attorney Rob Salyer on June 1 and 7 but needed board action to waive attorney-client privilege to reveal them publicly.

At the June 29 special board meeting, the board unanimously approved to waive the privilege after a motion was made by Wines and seconded by Trustee Brian Zeiszler.

Trustee Teresa Dastrup read aloud the two questions and the answers, but board members did not discuss the opinions during the meeting.

mask mandateThe first opinion detailed the legal ramifications upon the school district and the board if they fail to comply with the mask mandate, which Salyer determined to be legal.

Nevada Revised Statute 414.070 gives the governor “the authority to declare and end a ‘State of Emergency’ and to establish health and safety protocols (e.g., mask mandate) to address the emergency.” 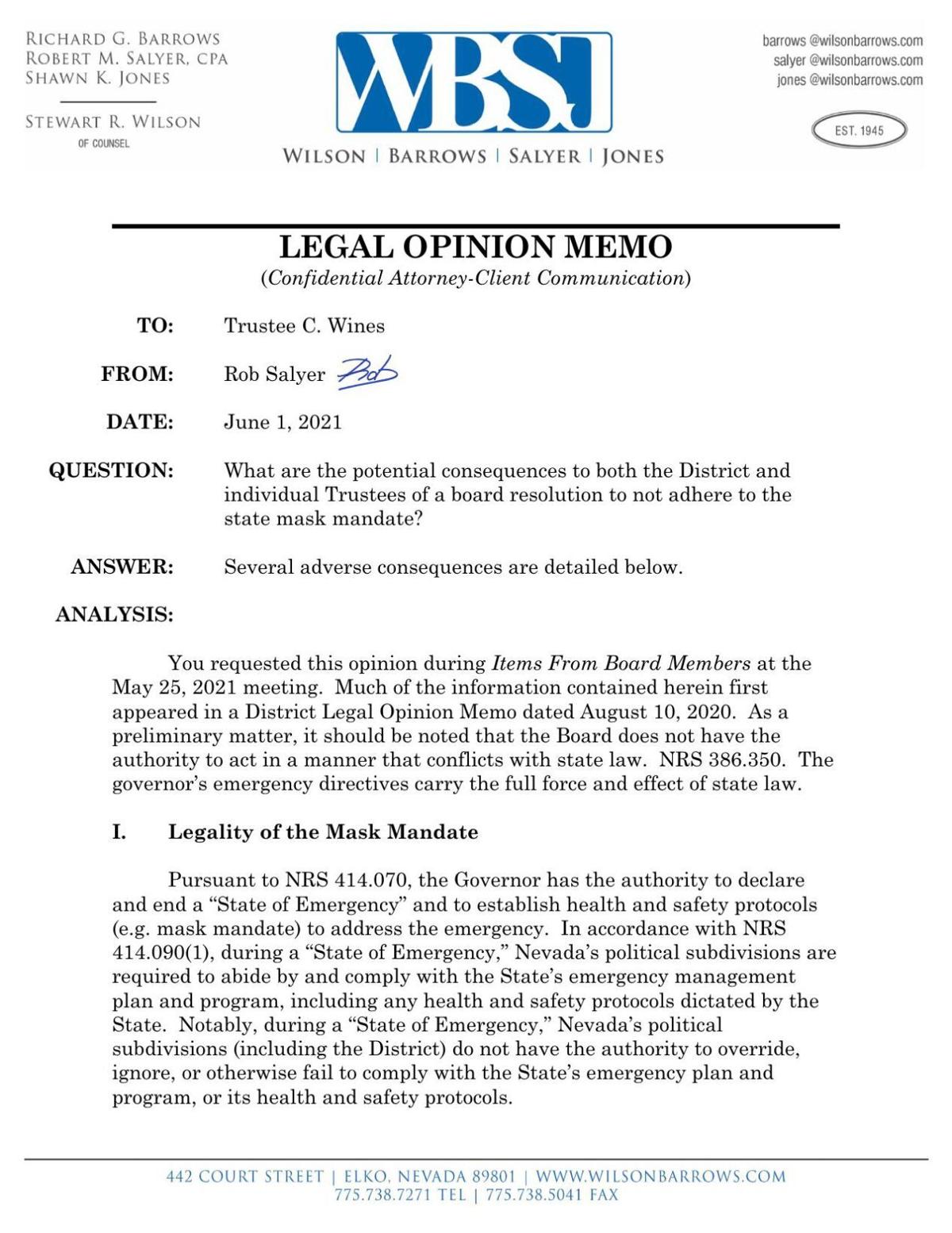 NRS 414.090(1) also requires Nevada’s political subdivisions “to abide by and comply with the State’s emergency management plan and program, including any health and safety protocols dictated by the State.”

Salyer wrote that the school district falls under one of the “political subdivisions” and does “not have the authority to override, ignore or otherwise fail to comply with the State’s emergency plan and program, or its health and safety protocols.”

Consequences for failure to comply include various fines, penalties and fees from the Nevada Department of Business and Industry’s Division of Industrial Relations-OSHA ranging from $9,600 to $136,500 per occurrence.

Salyer noted that non-compliance violations are potentially “willful and knowing” and “across multiple facilities. I would expect any penalties assessed against the District … to be on the high end.”

Legal liability against the school district would also be levied if “a staff member, student or community member become[s] ill or die[s] from Covid as a result of exposure at a District facility or event,” Salyer said.

“The District would likely face protracted litigation and the possibility of serious monetary liability resulting from such illness or death … in a case where the District intentionally acted to defy State health and safety protocols such as the mask mandate.”

Salyer wrote that the district’s non-compliance might also result in grievances filed by employee organizations, possibly ordering the school district to reinstate the mask mandate.

For school board members who vote “to operate schools in violation of the governor’s emergency directives,” such as a motion to remove mask guidelines for students “is in direct violation of directives … [the] action would be properly characterized as lack of due care.” Trustees who vote in favor of the motion “would lose their immunity and could be found personally liable for any injury that results,” Salyer said, citing NRS 41.032.

Those trustees would also lose indemnity from the school district for operating “outside the ‘scope of his or her duty, Salyer continued, also pointing to NRS 41.0339(1) and 41.0349 to support the opinion.

“As a result, the District would have no duty indemnify (reimburse) offending members for attorney’s fees or personal judgment against them,” Salyer said.

Salyer addressed the state’s responsibility to the school district under the Nevada Constitution’s education funding mandate in the second legal opinion.

In response to Wines’ question whether the state could remove funding to the school district to enforce the mask mandate, Salyer wrote such enforcement would violate the state Constitution.

“I conclude that if the board decides that students are not required to wear masks in school … it would violate the Nevada Constitution’s education funding mandate for the state to attempt to enforce the Mask Mandate by withdrawing education funding from the district,” Salyer said.

Citing Article 11, Sections 2 and 6 of the state Constitution, Salyer wrote that the state’s “duty to fund education is a primary duty of the Legislature.” 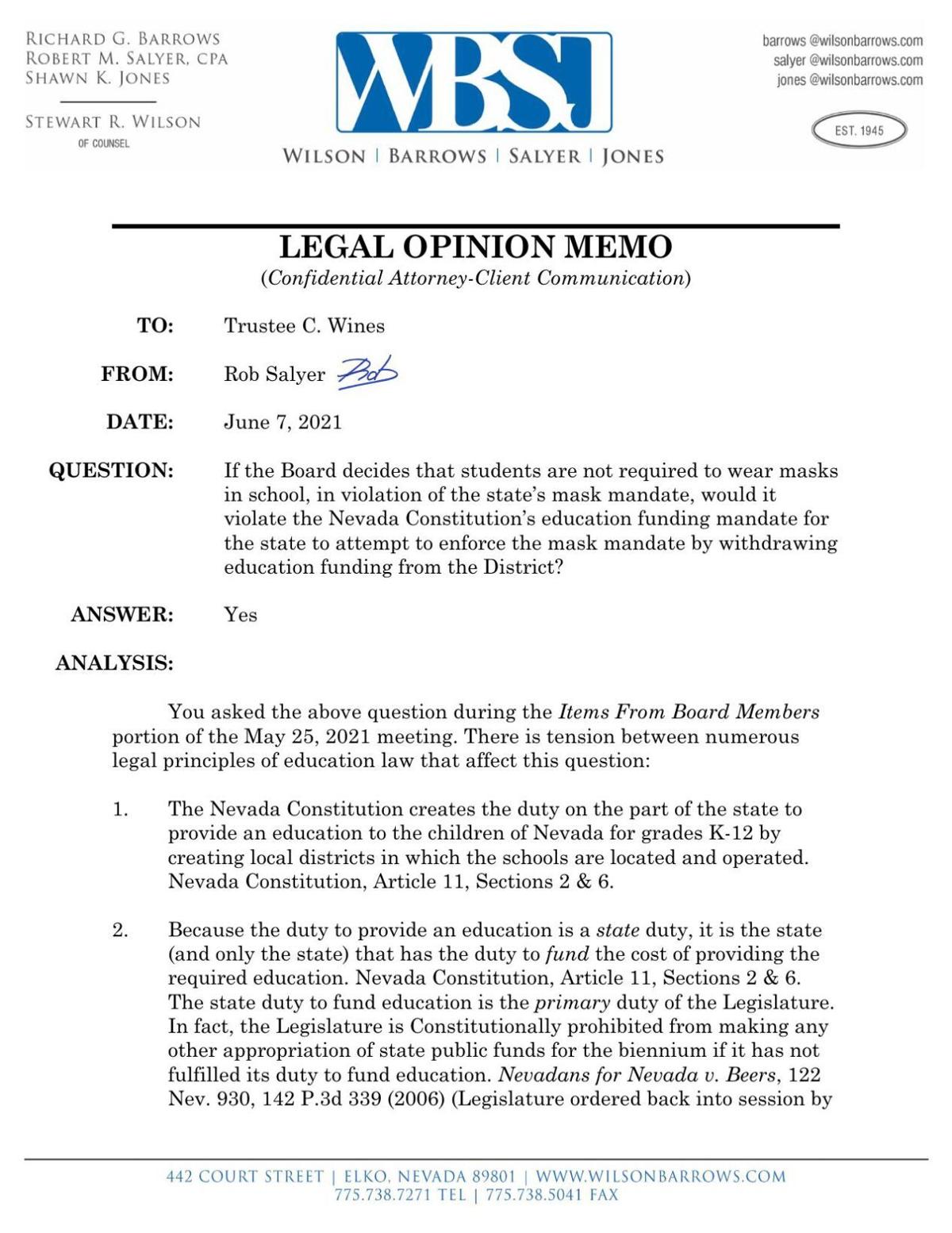 “In fact, the Legislature is Constitutionally prohibited from making any other appropriation of state public funds for the biennium if it has not fulfilled its duty to fund education,” he said.

In Salyer’s analysis of Wine’s question, he explained the legal principals of law regarding the mask mandate but “found no provision” in any of Gov. Steve Sisolak’s four emergency directives nor the Nevada Emergency Management Act involving mask mandates that “would authorize the state to withhold a school district’s Constitutionally required funding based upon a willful failure of the district to comply with the governor’s mask mandate in the schools within the district.”

He listed several reasons that would halt funding from the state to the school district, including failure to repay a loan from the state, exceeding pupil-teacher ratio in each grade, or failing to comply with rules applying to gifted pupils.

Toddler takes her first steps thanks to prosthetic legs

School board members discuss a plan of action for mask guidelines in schools.

"We discussed that this isn't the principal's decision. This is more of the school board, the superintendent and the governor because it all comes down from him."