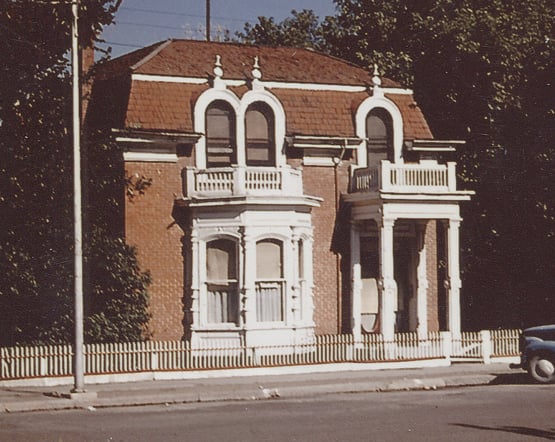 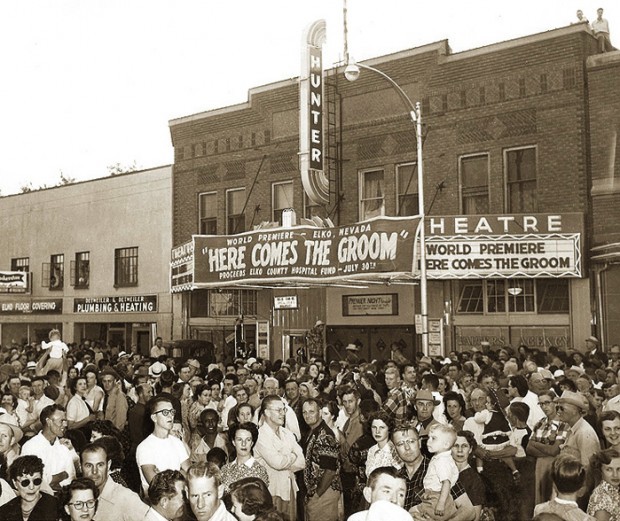 The world premiere of “Here Comes the Groom” at the Hunter Theatre in 1951, when Bing Crosby and Jane Wyman attended. 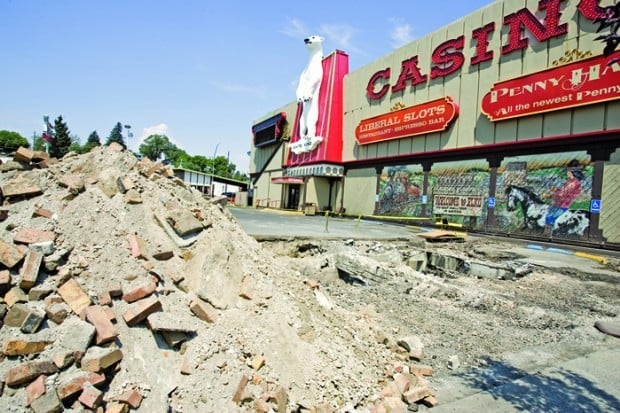 A pile of bricks lies near underground structures that were found recently under the Commercial Casino parking lot. 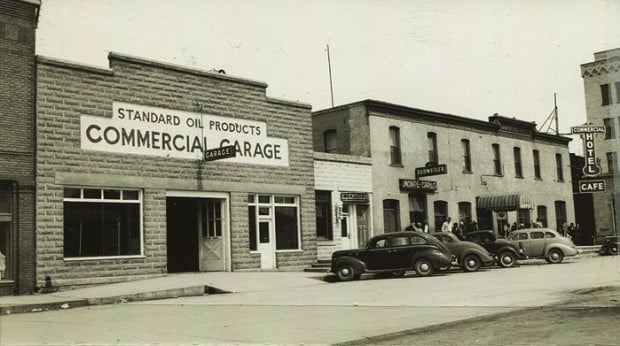 This photo, date unknown, shows the Commercial Hotel and Commercial Garage, facing Railroad Street. At far right is the Henderson Bank Building on the opposite side of Fourth Street.

ELKO — If you lean over the caution tape and peer into the hole excavated deep in the Commercial Casino parking lot, you’ll see a little bit of the past staring back.

Small sinkholes started forming on the southwest side of the casino a few months ago, prompting management to excavate the areas to see what was going on. What they found were parts of the basements of buildings that once stood there: the Bradley Opera House, the Hunter Theatre, the H and H market, and other landmark buildings that the owners demolished in 1965.

“When they demolished everything, they took the debris and dumped it into the basement portions of the building, backfilled it, and just paved over that,” said City of Elko building official Ted Schnoor. “There are some structures still in there where they imploded everything.”

Over the years, air pockets developed around the bricks, dirt, gravel, timber, rebar and concrete that were dumped in the basements of these old buildings. The parking lot began to bow and pock.

The old basement walls that are now visible through the holes in the asphalt belong to landmark buildings in Elko history.

The Bradley Opera House and Hunter family residential home were the original buildings on that land, according to Claudia Wines, director of Northeastern Nevada Museum for the last 11 years.

Later, photos from the Northeastern Nevada Museum show a mechanic’s garage, a cafe, a floor covering company, a plumber, the H and H Market, and a service station were all on the property. But it was the Commercial Lounge and the Hunter Theatre that brought national entertainment and acclaim to that block.

Newt Crumley, the son of the original owner of the Commercial (which was originally the Humboldt Lodging House but was renamed when gambling was legalized in Nevada in 1941), brought hundreds of musicians, orchestras, comedians and movie stars to town.

At one time in the 1950s, the Lounge operated with a $600,000 budget, according to material from the Northeastern Nevada Historical Society. (About a decade ago, the entertainment budget for the Commercial was less than half of that.) It was the first sophisticated cocktail lounge in the city.

Bing Crosby and Jane Wyman even arrived in town for the world premiere of their film, “Here Comes the Groom,” at the Hunter Theatre on July 29, 1951. The theatre burned down later that year and was rebuilt in 1952, according to museum records.

The buildings on the property that now contains the Commercial parking lot were sold to Elko Enterprises and demolished in 1965, according to news articles from the time.

When Northern Star Casinos purchased the property they received no records, architectural drawings, designs or plans from any of the previous owners’ construction or remodels.

The city doesn’t even have any plans that demonstrate exactly which structures are peeking out from under the asphalt these days. But Commercial property manager Chris Herman thinks that at one point the previous owners topped the sinkholes off with concrete.

That didn’t solve the problem.

“Of course the holes started to happen again,” Herman said. “The owners really want to fix it right and bring the Commercial and the Stockmen’s back to their former glory.”

The company will take a few weeks to refill the holes and then repave the parking lot. It won’t cost a ton of money and it won’t end in any glorious grand openings, but it will seal off a piece of history that seems to keep coming back.

UPDATE: One dead, one injured in Elko-Eureka county border shooting

“I want to wish our team member a speedy recovery, and I want to thank the law enforcement agencies and medical professionals for responding quickly to the scene and providing first aid.”

ELKO – Northeastern Nevada sheriffs were recognized Sunday for their special role in government, as a crowd of a few hundred people gathered i…

ELKO – A man was arrested on a burglary charge after the Elko Police Department responded to an alarm shortly after midnight on Saturday.

No details on shooting incident until Monday

“This is still an active investigation,” McLaughlin said

Fire extinguished near I-80 east of Elko

ELKO – Northeastern Nevada firefighters continue to get the upper hand on blazes almost as quickly as they break out.

The world premiere of “Here Comes the Groom” at the Hunter Theatre in 1951, when Bing Crosby and Jane Wyman attended.

A pile of bricks lies near underground structures that were found recently under the Commercial Casino parking lot.

This photo, date unknown, shows the Commercial Hotel and Commercial Garage, facing Railroad Street. At far right is the Henderson Bank Building on the opposite side of Fourth Street.