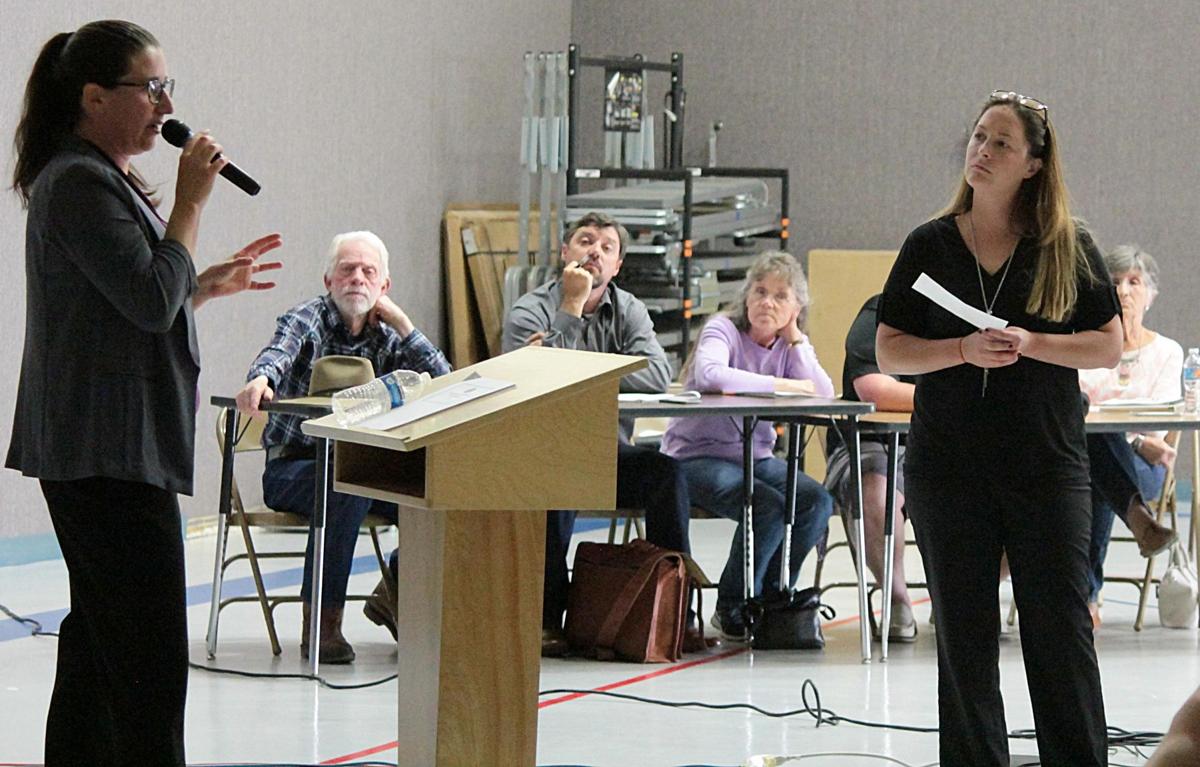 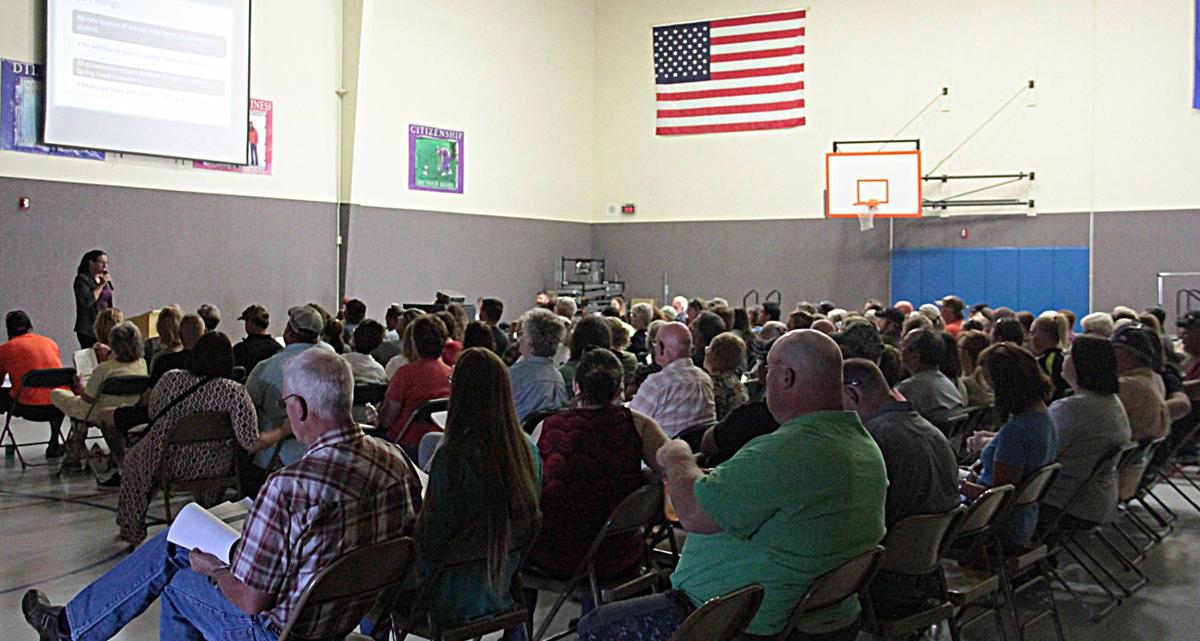 Junior Economist Elysia Ulrich of Hansford Economic Consulting presents a feasibility study to about 200 Spring Creek Thursday evening in the gym at Spring Creek Elementary School. Residents learned about the options of changing SCA from a HOA only to a different government structure. 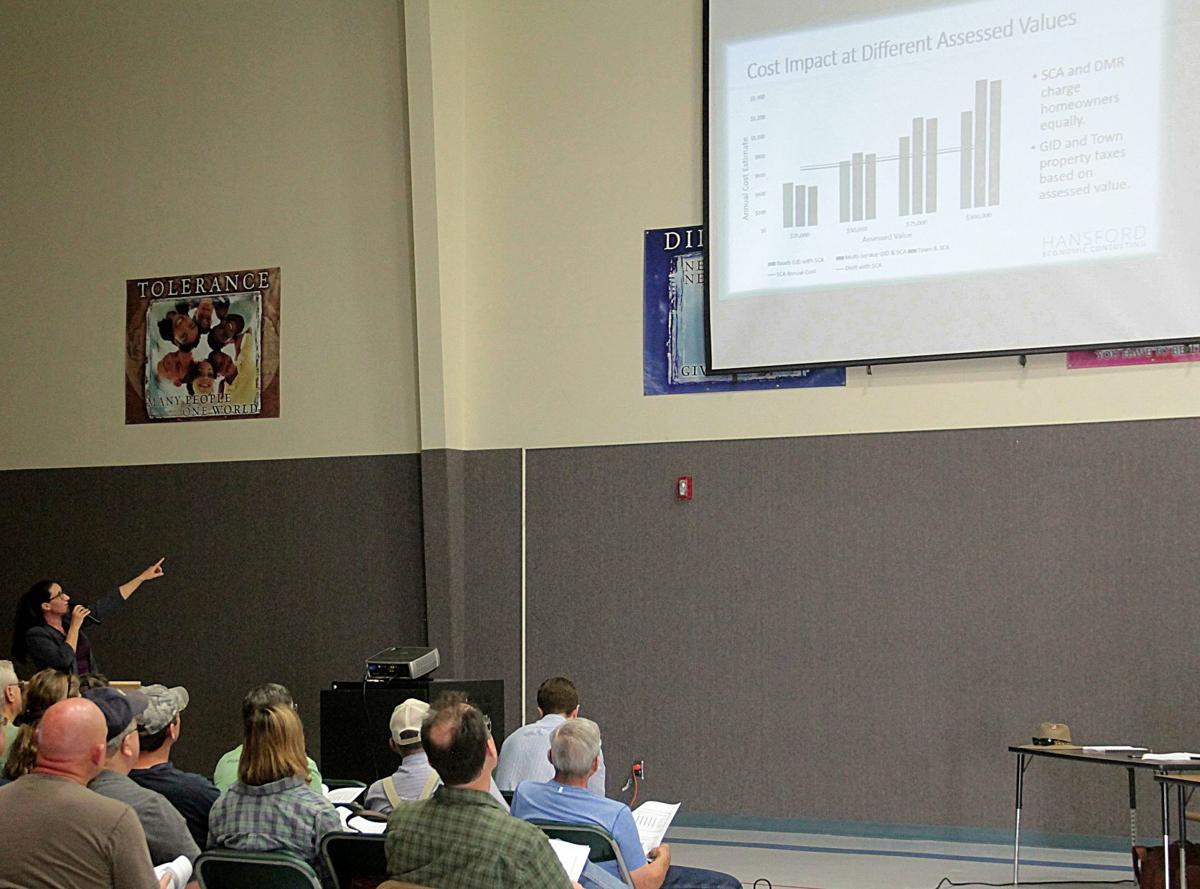 Junior Economist Elysia Ulrich of Hansford Economic Consulting points to a chart showing the possible costs to Spring Creek property owners of other government structures.  About 200 residents attended a presentation that reviewed the key points of a feasibility study commissioned by the SCA last year.

ELKO – Nearly 200 people filed into Spring Creek Elementary School gym to learn more about Spring Creek Association’s future options – with some coming away from the meeting willing to keep the association intact.

Residents received a copy of a feasibility study by Hansford Economic Consulting that examined other forms of government and their estimated costs, presented by Junior Economist Elysia Ulrich and Analyst Zach Gustafson with HEC.

Among the findings presented, the study revealed that no other revenue sources were found under any of the potential governance scenarios, which surprised Ulrich.

“This surprised me just as much, or maybe more, than it surprised you, because we really tried to find different sources of revenue,” said Ulrich, explaining that no additional state or county money is available to help pay for road costs and amenities maintenance.

Another key finding from the study was that the cost of other forms of government involving the SCA, which included a district for maintaining roads (DMR), a roads-only general improvement district (GID), a multi-service GID, or turning Spring Creek into an unincorporated town, could increase costs to property owners.

One impact of adopting a new governance would be how residents would be charged for their fees, with the Association and DMR charging everyone equally and the GID and unincorporated town options collecting property taxes based on assessed value, Ulrich explained.

HEC’s report also analyzed the dues levied by the SCA for roads and amenities, comparing them with HOAs that provide similar services and amenities, and found the fees to be comparatively low, especially for golf course.

The goal of HEC’s presentation was to give “the key components” so that property owners would hear what they needed to know and what was important to them, explained Ulrich.

After the presentation, Ulrich and SCA President Jessie Bahr fielded questions from the audience, with Bahr providing background into some of ongoing issues within the Association.

Paul Pettit, a resident for 27 years in the Vista Grande Tract 200 section, believed that nothing needed to be changed at the conclusion of the meeting.

“If it was up to me, I wouldn’t change it,” Pettit said. “I’d leave it the homeowners association. I think that’s a workable path of governance and all it takes is involved citizens and good leadership.”

“I think the best option is to stay as an Association, based on what I read in the report and what they said tonight,” Linstruth said, adding that while the Association has improved, his biggest concern was the water.

“I think most people want out of the Association because of water,” Linstruth continued. “I think the roads could be better, but they’re not bad.”

Christine Pruessing, a 10-year resident of Vista Grande, felt that becoming “a town is going to cost us too much money.”

“There’s too many unknowns,”especially with a break (between) the mobile section and the rest (of the Association),” Pruessing said.

Tom Hanum of Marina Hills, a lifelong resident of Spring Creek, saw no long-term benefit to overhauling the SCA into another entity.

“I don’t see any advantages without losing control of our own destiny,” said Hanum.

Jake Reed of Marina Hills agreed with Hanum that the Association should stay the way it is, adding that Bahr “has put a new life into the Association.”

Director Joshua Park, who attended the meeting, felt that the study was “money well spent.”

“I think a study like this shows that the assessments are in line with what people are receiving,” said Park. “In fact, they’re probably getting value for it.”

However, the countdown is getting closer to 2033, when the Association is set to expire, and a decision will have to be made on Spring Creek’s future, added Park.

“I think in the coming months and years, we’ve got a lot to think about. We need to be planning for the future, one way or another.”

WELLS – The Elko County Sheriff’s Office has issued a “missing-endangered” person report for a Wells man.

ELKO – A man was sentence to life in prison without parole in the death of a 7-month-old baby that occurred nine months ago.

Junior Economist Elysia Ulrich of Hansford Economic Consulting presents a feasibility study to about 200 Spring Creek Thursday evening in the gym at Spring Creek Elementary School. Residents learned about the options of changing SCA from a HOA only to a different government structure.

Junior Economist Elysia Ulrich of Hansford Economic Consulting points to a chart showing the possible costs to Spring Creek property owners of other government structures.  About 200 residents attended a presentation that reviewed the key points of a feasibility study commissioned by the SCA last year.