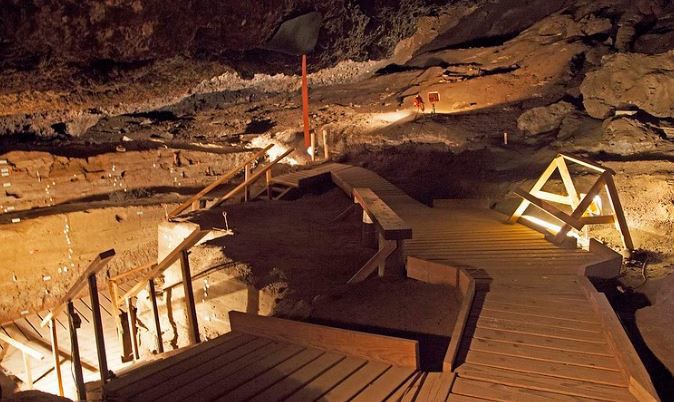 About 10 miles southeast of Fallon, on US Highway 50, there is a place known as the Grimes Point Archaeological Area. Over the last 10,000-21,000 years, the level of ancient Lake Lahontan fluctuated widely due to natural climate changes. At times, the water was so high, it formed a fresh water lake that extended from Honey Lake in California to Lake Bonneville in Utah.

During times of high water, wave action created many caves along the hillsides that later became attractive places for early man to inhabit and to use for shelter and storage.

Evidence of this ancient habitation is abundant in the area and it is truly worthy of a visit to see.

There is a petroglyph trail that winds through hundreds of boulders where people have carved mysterious images in the desert varnish for the past 8,000 years.

Traveling a short distance north of the petroglyphs, one can see several caves that were used in ancient times, including Fish Cave, Spirit Cave and Hidden Cave.

In 1927, four young boys were exploring the area, and found a large cave whose floor was littered with Indian artifacts.

Archaeologists were contacted to visit the cave and a series of archaeological digs revealed an incredible array of Indian artifacts that provided information about the people who had used the site for thousands of years. The archaeologists named the Cave “Hidden Cave” due to the difficulty in finding it.

Eventually, an air circulating system and lights were installed to make working conditions in the cave tolerable.

A heavy steel door that could be locked was installed on the tiny entrance and a series of ramps and stairs were installed so visitors could visit the excavated site.

The excavations were done like the slicing of a layer cake, revealing a vertical face that cut down through 12,000 years of deposits containing traces of ancient use by humans and animals.

Visitors to the cave can see this vertical face where tags have marked dates and layers of habitation.

The layers can be dated by known dates of visible deposits.

About 1,100 years ago, the Mono Craters volcanic area erupted and sent a plume of ash that left a quarter-inch white layer of deposit in Hidden Cave.

Similarly, 6,900 years ago, Mount Mazama in Oregon erupted much like Mount Saint Helens, creating Crater Lake that threw billions of tons of ash and debris into the air. This event deposited a distinct layer over a half inch thick in Hidden Cave.

Using these two layers as markers, archaeologists have been able to date the different types of projectile points and other artifacts found in Hidden Cave.

This is how we can tell the approximate age of the various types of projectile points found in the area.

Extremely uncomfortable for human habitation, Hidden Cave was used mostly as a place to store items the ancient people used seasonally as they hunted and gathered for their existence over the past 9,000 years.

Because of this use for storage, several caches of baskets, tools and projectile points were recovered where they had been hidden for future use.

The condition of the artifacts was remarkable, since they had not been broken from daily use and discarded.

The Grimes Point area is also the location of Sand Mountain and the ruins of the Sand Springs Pony Express Station. Just north of the parking lot for the Hidden Cave tours is the entrance to Spirit Cave where the 10,000 year old mummified remains of the Spirit Cave Man were discovered in 1940. I have written about this person in my prehistoric novel, “Legends of Spirit Cave.”

Guided public tours of Hidden Cave are available on the second and fourth Saturday of each month. Call to confirm the schedule at 775-423-3677. Participants meet at the Churchill County Museum, 1050 South Maine St. in Fallon at 9:30 am where they can see many of the artifacts that have been taken from the cave.

They then follow the BLM guide 11 miles in their own cars southeast to the Grimes Point Archaeological Area and hike up to the cave where the guide unlocks the steel door and turns on the lights.

Although dust and visibility are no longer a problem, you will notice the strong smell of ammonia from the decomposition of bat guano.

The “Under One Sky” display at the Nevada State Museum has a realistic reconstruction of Hidden Cave if you are unable to see the real thing.

It does show the various layers of the vertical excavations. If you can arrange a trip to Fallon, I suggest taking the tour of Hidden Cave.

Man charged with murder in death of NHP sergeant

ELKO — Hundreds of vehicles lined Idaho Street Saturday evening to honor a state trooper killed in the line of duty. Some wept while others pl…

ELKO — A 6.5-magnitude earthquake near Challis, Idaho on Tuesday afternoon was felt as far south as Elko and Spring Creek.

ELKO — One new confirmed case of COVID-19 in Elko County was reported Friday by the Nevada Division of Public and Behavioral Health, bringing …

Two new confirmed cases of coronavirus have been reported in Elko County, raising the total number to seven.

The number of coronavirus cases and deaths in Nevada continues to rise.