Lithium Nevada Corp.’s plans to mine and produce lithium products at its Thacker Pass project near Orovada in northern Humboldt County are on schedule, and the company plans construction of a rail port in Winnemucca to serve the project.

“The permitting process is progressing as planned, and the schedule to receive federal approval for construction and operations remains on target for December 2020,” said Alexi Zawadzki, president of North American operations for Lithium Americas Corp. and chief executive officer of subsidiary Lithium Nevada Corp.

He said the target is to begin project construction in 2021 and begin production in late 2022 or early 2023.

“Our engineering team is making good progress on the definitive feasibility study, which is scheduled to be complete by mid-2020. We are continuing to evaluate a variety of strategic financing options for Phase I and preliminary discussions with potential partners are progressing well,” Zawadkzi said.

Lithium Nevada also is working on financing for the Thacker Pass project.

“The Thacker Pass project is being designed to produce battery-quality lithium chemicals for use in the manufacturing of battery components. Both the large scale of the project and its potential to produce a number of high purity battery chemicals provides an opportunity for a more efficient battery supply chain in the United States,” Zawadkzi said.

He said Lithium Nevada would be creating value at its Thacker Pass operation by manufacturing highly refined, ultra-pure battery quality products at an on-site plant. The product would be trucked to Winnemucca for rail shipment or by truck.

The company expects to build a rail transloading facility in Winnemucca to offload raw materials needed for manufacturing to transport by truck to Thacker Pass, and trucks from the plant would return to Winnemucca with product to be loaded onto railcars or trucked out to “where our customers are. We have flexibility to do either,” Zawadkzi said.

As part of the company’s goal of being as environmentally friendly as possible, Zawadzki said Lithium Nevada is looking at using electric trucks for the roughly 60-mile trip to and from Thacker Pass. The trucks would be charged in Winnemucca and at Thacker Pass, and their trips would be carbon-free.

“It could work perfectly,” he said. “It’s definitely technology we will be evaluating for our project.”

Zawadzki said Lithium Nevada’s vision from the beginning has been to develop a project that is as green as possible, including efforts to make the project carbon neutral. Thacker Pass also may generate its own electricity.

The company also changed the plan for mining lithium after Lithium Americas and Western Lithium Corp. merged in 2016, with Lithium Americas as the operator, to stay out of the major wildlife habitat areas of Montana Mountains. The project site now is “completely outside the mountains,” Zawadzki said.

The shift in the project meant more expense for the company, but the board supported the change, and the U.S. Bureau of Land Management was pleased the company wouldn’t mine in the Montana Mountains, he said.

Zawadzki said there hasn’t been a sage grouse spotted on the current site area in 10 years.

He went beyond the site change by helping start the Great Basin Sagebrush Restoration Fund with co-founder Professor Tamzen Stringham, a rangeland specialist at the University of Nevada, Reno. (See related story in this issue of the Mining Quarterly.)

Lithium Nevada entered into an agreement in September with a contract miner for the Thacker Pass lithium project. The lithium deposit is in clay.

The North American Coal Corp. reported the company formed a wholly owned subsidiary, Sawtooth Mining LCC, for the Nevada lithium project after entering into the agreement as exclusive contract miner for the Thacker Pass lithium deposit.

Sawtooth will provide mine engineering, construction, operation and reclamation services and certain equipment, as well as the contract mining.

Zawadzki said North American Coal has been mining for more than 100 years and is efficient at using the trench method for mining. The Thacker Pass Project calls for trench mining and backfilling in year seven of the project, which has a 46-year mine life.

He also said the company has developed effective ways to concurrently reclaim mined land with vegetation that at Thacker Pass will include grasses and sagebrush.

“That played a major role in going with North American Coal. We saw this. They can do it in the desert,” he said.

In the September announcement of the contract with North American Coal, the president and chief executive officer of North American Coal and parent company, NACCO Industries Inc., J.C. Butler said the company is “pleased to partner with Lithium Americas to develop the Thacker Pass project, which we view as a key part of developing a strong lithium battery industry in the United States.”

“We are highly confident we can contribute to success at Thacker Pass,” he said. “We have built five new surface mines for new customers in the last nine years, each providing an integrated solution to customer operations, and we have a strong track record of partnering with our customers for long-term success.”

NACCO Industries is the public holding company for The North American Coal Corp.

Lithium Nevada additionally has entered into a design and build contract with TIC – The Industrial Company — to help with the Thacker Pass feasibility study, with an option to become prime contractor for the plant.

Job estimates are for roughly 1,000 construction jobs and 183 jobs for the first phase of operations and 102 jobs for trucking, for a total of 285 employees that would be on the Lithium Nevada payroll.

Sawtooth Mining’s agreement with Lithium Nevada calls for Lithium Nevada to reimburse Sawtooth for operating and reclamation costs and pay a management fee per metric ton of lithium delivered during the 20-year contract period. Lithium Nevada also will pay a success fee to Sawtooth for milestones achieved in engineering, construction and production.

Sawtooth will provide $3.5 million toward engineering services and will fund up to $50 million to procure mobile mining equipment once the project is permitted. Lithium Nevada will later reimburse Sawtooth over a seven-year period, according to the agreement.

North American Coal won’t hold equity in the project but will benefit from the long-term contract, Zawadzki said.

As the feasibility study and permitting efforts are underway, the company is continuing process testing at a facility in Reno, which has produced a high-quality lithium sulfate solution.

Lithium Nevada also reported hiring a vendor to engineer and design a lithium carbonate and lithium hydroxide evaporator and crystallizer.

Demand for lithium for battery products has increased with advancing technology and electric cars.

All the land for the Thacker Pass Project is managed by the BLM, and Lithium Americas has said the site has measured and indicated lithium carbonate resources of 6 million metric tons. The total area to be disturbed with the project is 3,161 acres.

The BLM’s Winnemucca District Office is expecting to start the environmental impact statement in December for the project and complete the EIS in 12 months under the Interior Department’s current requirement to fast-track studies, according to Ken Loda, lead geologist for the BLM out of Winnemucca.

According to plans, Thacker Pass won’t require dewatering for years, and there will be no open pit and no pit lake at the end of mining.

“We do not hit the water table until year 25 of mining,” Zawadzki said.

Lithium Nevada also has been working with the McDermitt Tribe, and Zawadzki said the company is exploring training options with the tribe to be sure tribal members have the skills needed by the time production starts.

The company also took tribal members to a mine in New Mexico operated by North American Coal to show them how the contractor intends to operate at Thacker Pass.

Lithium Nevada also has hired Maria Anderson for community relations, and the company plans to open a storefront in Winnemucca so Anderson will be available to the community at that office, Zawadzki said. Anderson will be steering training programs for the Thacker Pass Project as well.

Lithium Nevada earlier hoped to mine clay at the Thacker Pass site for RheoMinerals in Fernley that produces specialty clay minerals and is a subsidiary of Lithium Americas, but that didn’t happen.

“The clay wasn’t of the quality needed, so they get the clay elsewhere,” Zawadzi said.

Lithium Nevada to invest $1B-plus in Humboldt County mine

OROVADA —Reno-based Lithium Nevada Corp. is preparing to invest $1.7 billion into the development of a “world-class lithium project” near Orov…

Lithium Nevada Corp. has entered into an agreement with a contract miner for the Thacker Pass lithium project near Orovada in Humboldt County,…

ELKO — These are busy days in Nevada’s mining industry, with exploration of minerals other than gold and silver growing and new projects under…

BOISE, Idaho (AP) — The Interior Department, Idaho and Wyoming are appealing a court ruling that halted a Trump administration plan to ease la…

Lithium Nevada's Thacker Pass site in Humboldt County will become a mining and production location, if all goes as planned for the company. 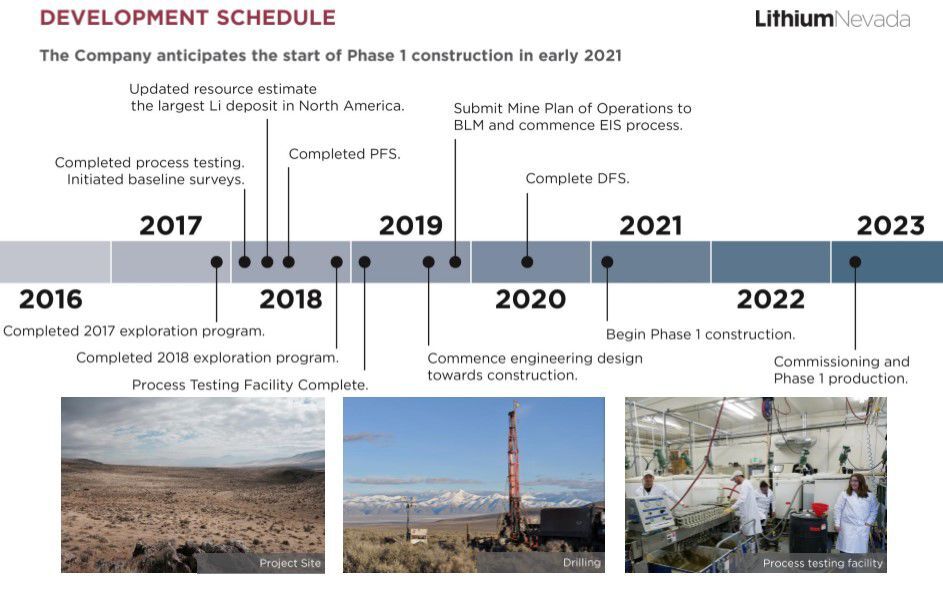 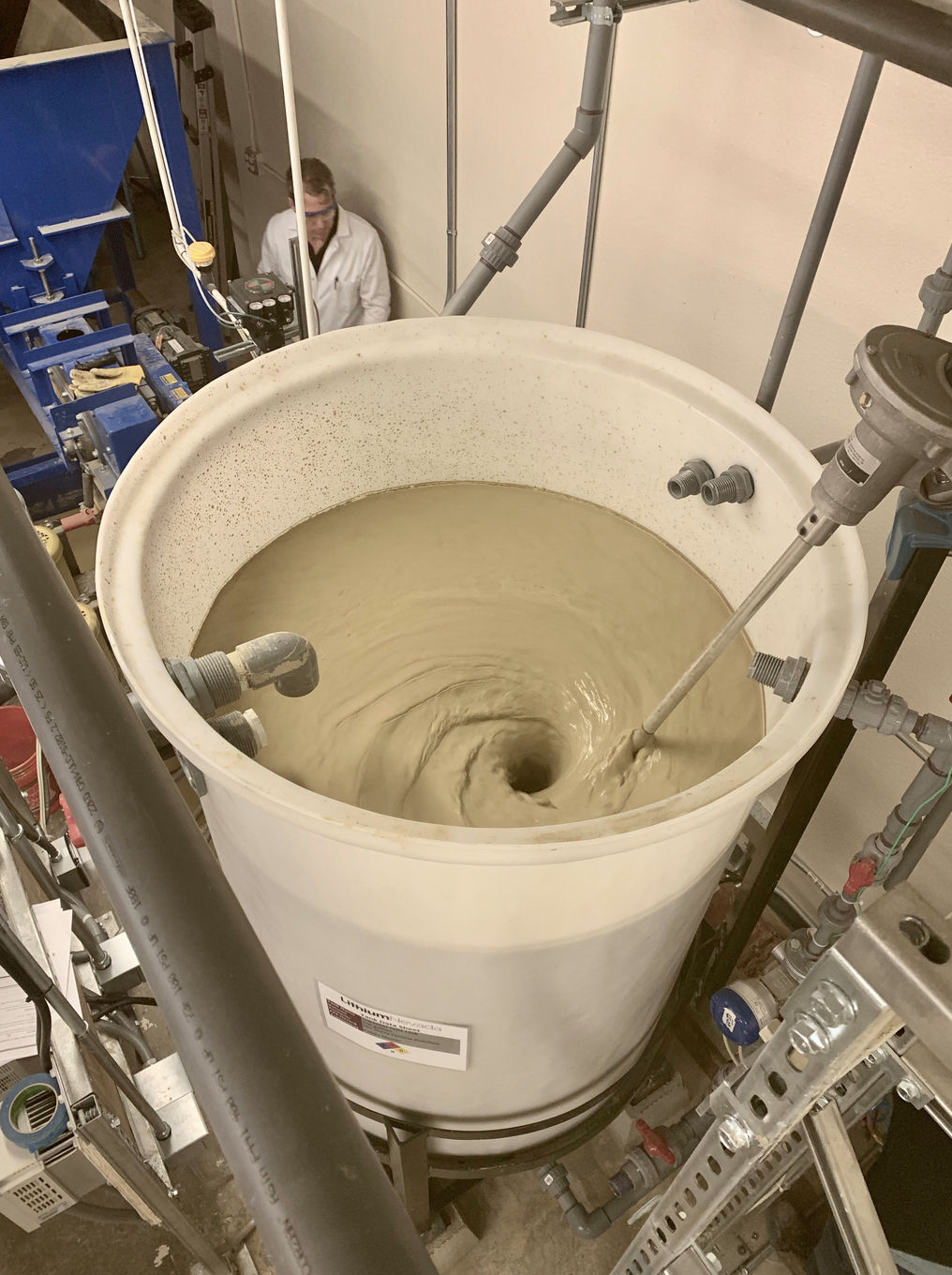 A testing facility in Reno mixes lithium sulfate solution for Lithium Nevada, which plans to mine and produce battery-quality lithium chemicals at its Thacker Pass project in northern Humboldt County.