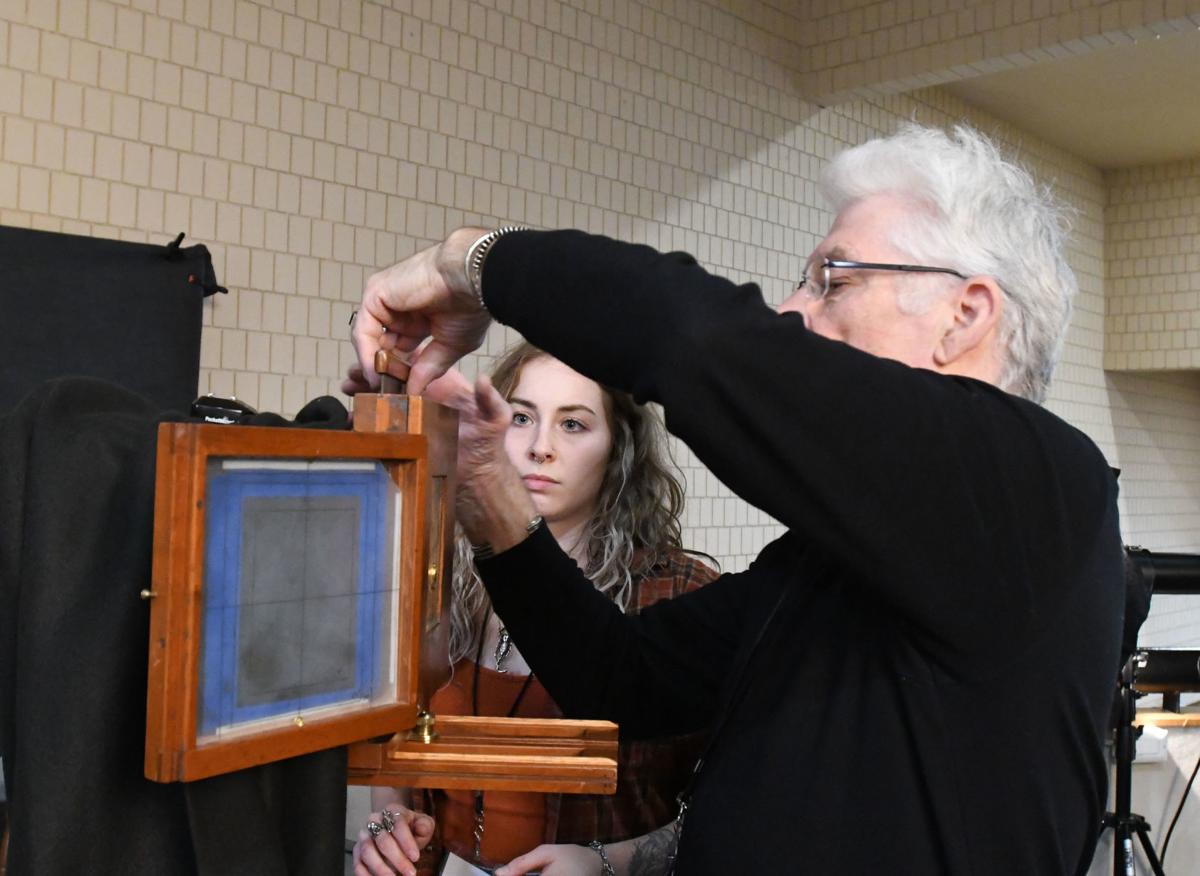 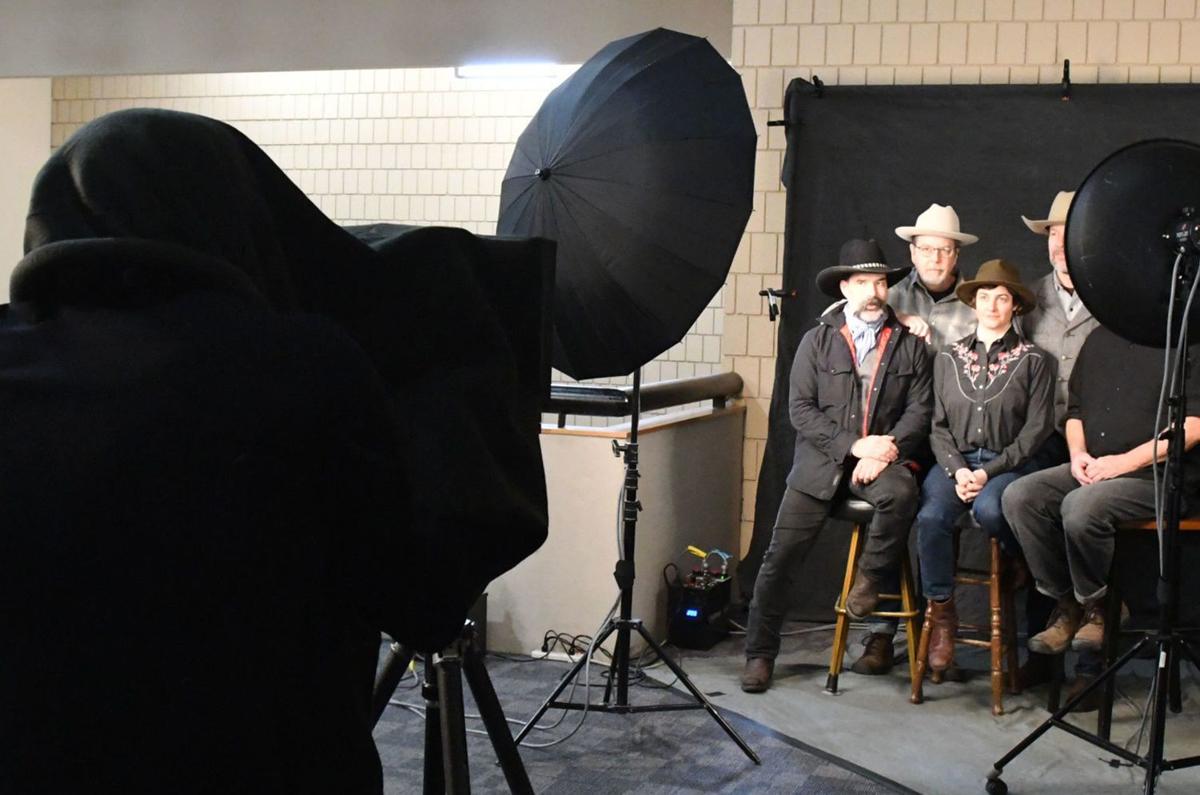 Kevin Martini-Fuller drapes a black cloth over his head so he can view the image on the glass in back of the camera. His subject matter is Rattlesnail, a band out of Seattle. 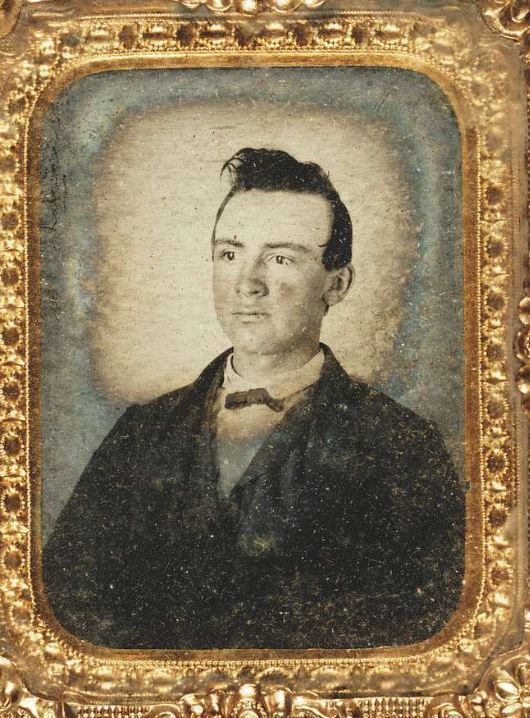 This historic image is an example of the tintype process.

There seemed no better time, according to Martini-Fuller, to introduce this handmade art form to Elko than during the National Cowboy Poetry Gathering, a time when we honor tradition.

The tintype process was patented by Hamilton Smith in the U.S. and by William Kloen in the United Kingdom in 1856. The tintype, (also known as a melainotype or ferrotype) was the “instant photo” of its day. The process rivaled daguerreotypes and ambrotypes, which were costly, delicate and very time-intensive.

The “quick” exposure (seconds versus minutes to a half hour) and speedy drying times for tintype made this film process perfect for street photography. Carnival photographers sold tintypes in the 19th century. They reached their peak in popularity in the 1860s and ‘70s. Mathew Brady even used the tintype process during his documentation of the Civil War.

Martini-Fuller has been a photographer since the age of 12. He has been coming to the National Cowboy Poetry Gathering for about 34 years. Last year he completed a storefront portrait exhibition.

“Collodion (gun cotton) is mixed with ether and 190 proof alcohol and that makes the base of the emulsion,” Martini-Fuller said.

The mixture is applied to a plate and then the plate is dipped into a silver nitrate bath. This soaks into the gun cotton, creating a light-sensitive emulsion.

“We use aluminum [for the plate] from a trophy company,” he said.

Martini-Fuller has to load the film inside a light-tight camera bag, then insert the film carrier into the back of a large format camera. Once he is ready to make an exposure, he lifts the “dark slide” and removes the lens cap, all the while flashing strobes for an intense burst of light which speeds up the exposure process.

Then the film must be developed.

“We use ferric sulfate mixed with glacial acetic acid and water,” Martini-Fuller said. “The development time is about 20 seconds.”

“It all has to be done before the plate dries, which is about 12 to 15 minutes,” he said. “Once it dries it is no longer light-sensitive.”

Martini-Fuller learned this process only about six months ago but he wanted to do more with it.

“I wanted to visually take the work to a higher level, to bring in the element of history that the poetry holds,” Martini-Fuller said about his tintype gig at the Gathering.

He will be taking photographs of poets and musicians upstairs in the convention center for the rest of the Gathering.

John Fergusen has an exhibit upstairs in the museum.

Sun Tunnels: Seeing the solstice through an artist’s eye

ELKO – The language of the cowboy is the engine that drives the National Cowboy Poetry Gathering each year.

Workshop was a 'bonefied' good time

Laughter rules at 'The 70s Show'

ELKO – It all started when DW Groethe noticed he and his friends would be turning 70 years old before the next Cowboy Poetry Gathering.

ELKO – Images Portrait Studio has been in business for more than 20 years, according to new owner Narisha Heider.

ELKO – The coronavirus pandemic has forced many event cancellations in the near future. Although the next National Cowboy Poetry Gathering is …

Kevin Martini-Fuller drapes a black cloth over his head so he can view the image on the glass in back of the camera. His subject matter is Rattlesnail, a band out of Seattle.

This historic image is an example of the tintype process.