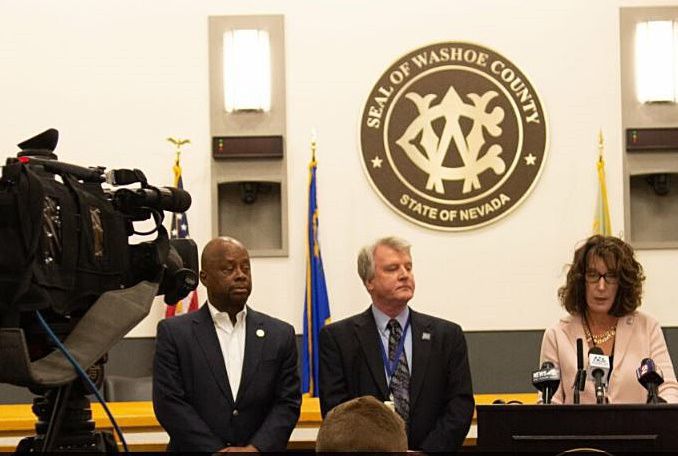 Washoe County officials during a press conference addressing the county's first presumptive case of COVID-19 at the Washoe County Administration Complex on March 6, 2020. 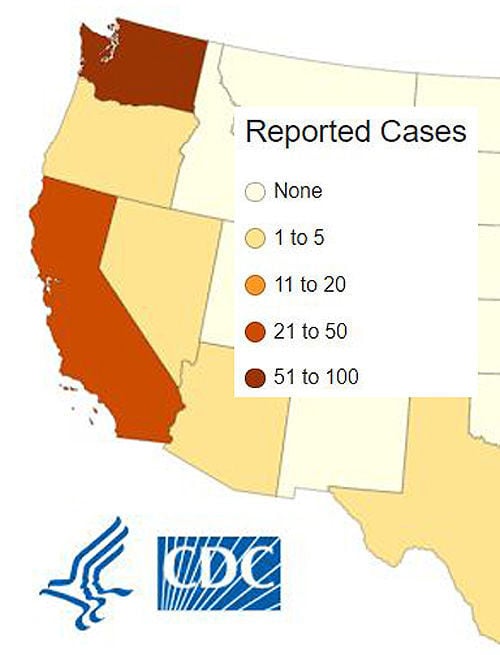 Washoe County Health District officials are monitoring an unspecified number of residents who recently traveled on the Grand Princess cruise ship linked to several cases of the novel coronavirus, including a Northern Nevada man in his 50s who on Thursday became the second patient in the state to test presumptively positive for the virus.

Health district officials declined to say how many individuals are being watched for possible exposure to the virus but did note that family members of the patient also traveled on the ship. The man, who is in stable condition and in self-isolation at home, also has family members who attend Huffaker Elementary School, which was closed on Friday as health district officials test kids displaying influenza-like symptoms for coronavirus.

“We’ll use those results to determine if there is any COVID-19 associated with the influenza-like illness we’re seeing at that school to determine whether we’re able to rule out COVID-19 as a caucus of illness there,” Washoe County District Health Officer Kevin Dick said at a news briefing on Friday.

There have been no confirmed cases of coronavirus at the school, he added.

Washoe County School District Interim Superintendent Kristen McNeill said that a team last night conducted a “deep cleaning” of the campus, with a second cleaning scheduled for Friday afternoon. McNeill said the school district will work with local health officials to decide when to re-open the school.

Nevada Superintendent Jhone Ebert said in a statement that “the Department of Education has been working with district leaders throughout the state on preparation and contingency plans for COVID-19 and we have developed recommendations and options to support them in addressing local concerns.”

Gov. Steve Sisolak said in a statement that his office is monitoring the situation and is working with education leaders.

“I encourage all Nevadans not to panic, but to take this seriously and to stay informed as updates on this developing situation become available,” Sisolak said.

Dick said that the health district is in contact with the individuals who sailed on the Grand Princess and is monitoring them while they remain in self-isolation for 14 days.

A 71-year-old Placer County, California man who also traveled on the same ship on a different cruise to Mexico last month died on Wednesday after contracting the virus. The ship, which left San Francisco on Feb. 21 on a cruise to Hawaii, has been holding off the coast of California with passengers confined to their cabins as officials test those showing symptoms of coronavirus.

Local residents who sailed on the Grand Princess were not immediately identified after their return because “the presence of COVID-19 on the cruise ship was not immediately known,” Dick said. The Placer County case helped investigators identify the ship as a source for the coronavirus.

“That investigation and other investigations led back to the identification of the cruise ship as being an exposure for residents,” Dick said.

At this point, Dick said that the patient who tested presumptively positive is being treated as a travel-related case and that health district officials have not yet identified any transmission of the virus within the community. Dick said that the health district is “working diligently” to trace the individuals the man may have had close contact with since returning from the cruise after he tested positive Thursday evening.

Once the health district has completed its “contact investigation,” Dick said that the district will take “appropriate action with them for isolation and monitoring.”

The health district is also asking that travelers returning from China, Italy, Iran, South Korea and Japan, countries with higher rates of active transmission, to “self-isolate” and contact the district.

“We are asking that if we have any travelers returning from those five countries, that they self-isolate and contact the health district so we can work with them on risk assessment and monitoring,” Dick said.

In the meantime, health district officials are reminding people to wash their hands frequently, avoid handshakes, clean high-contact surfaces, and stay home from school and work if showing symptoms. Health district officials said they are not at this point providing any guidance to residents to avoid large public gatherings or travel.

“We are very low risk of COVID-19 transmission in our community,” Dick said. “We will monitor that we will work to try to prevent the spread of the disease, but we will continue to assess the situation as it evolves.”

Washoe County officials during a press conference addressing the county's first presumptive case of COVID-19 at the Washoe County Administration Complex on March 6, 2020.