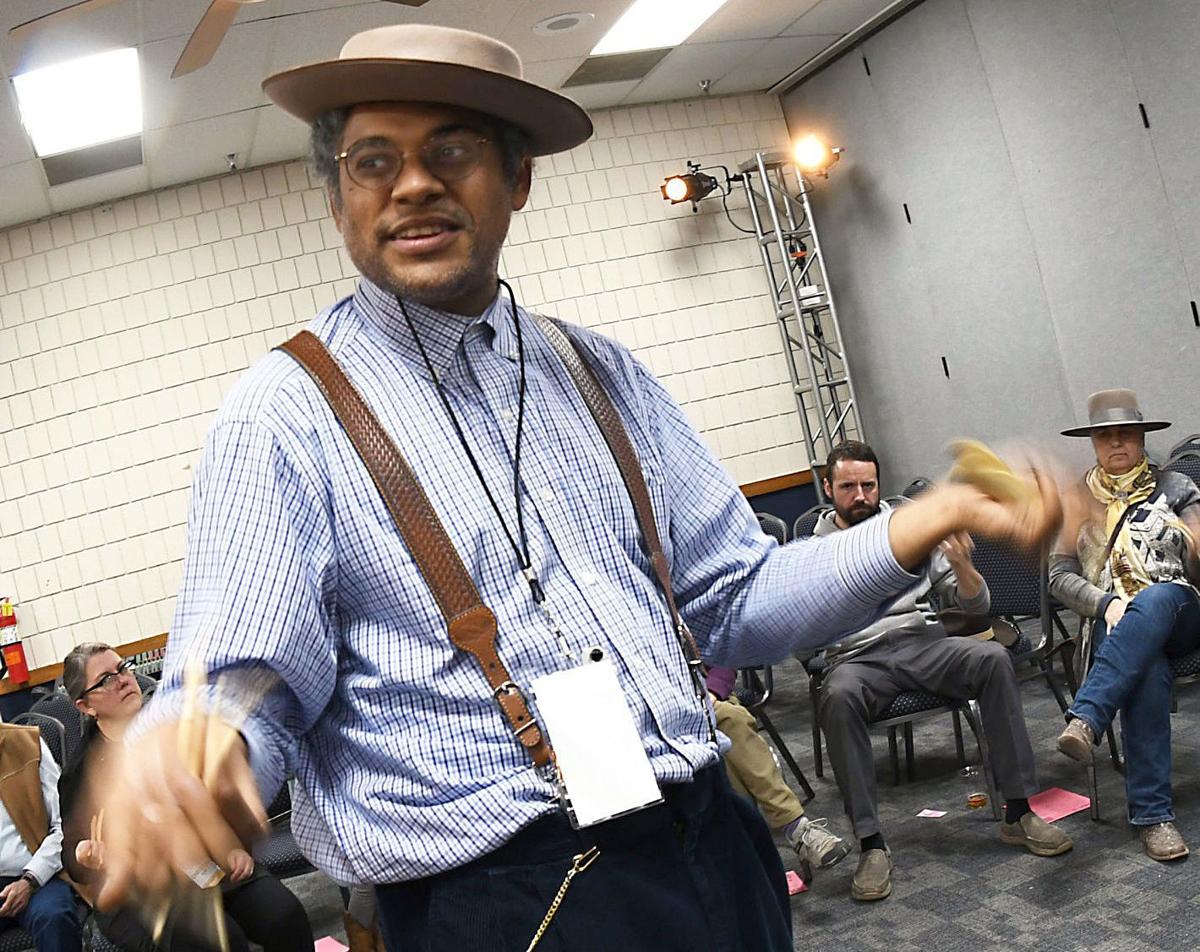 Musician Dom Flemons plays a "little ditty" for students in his bones workshop. 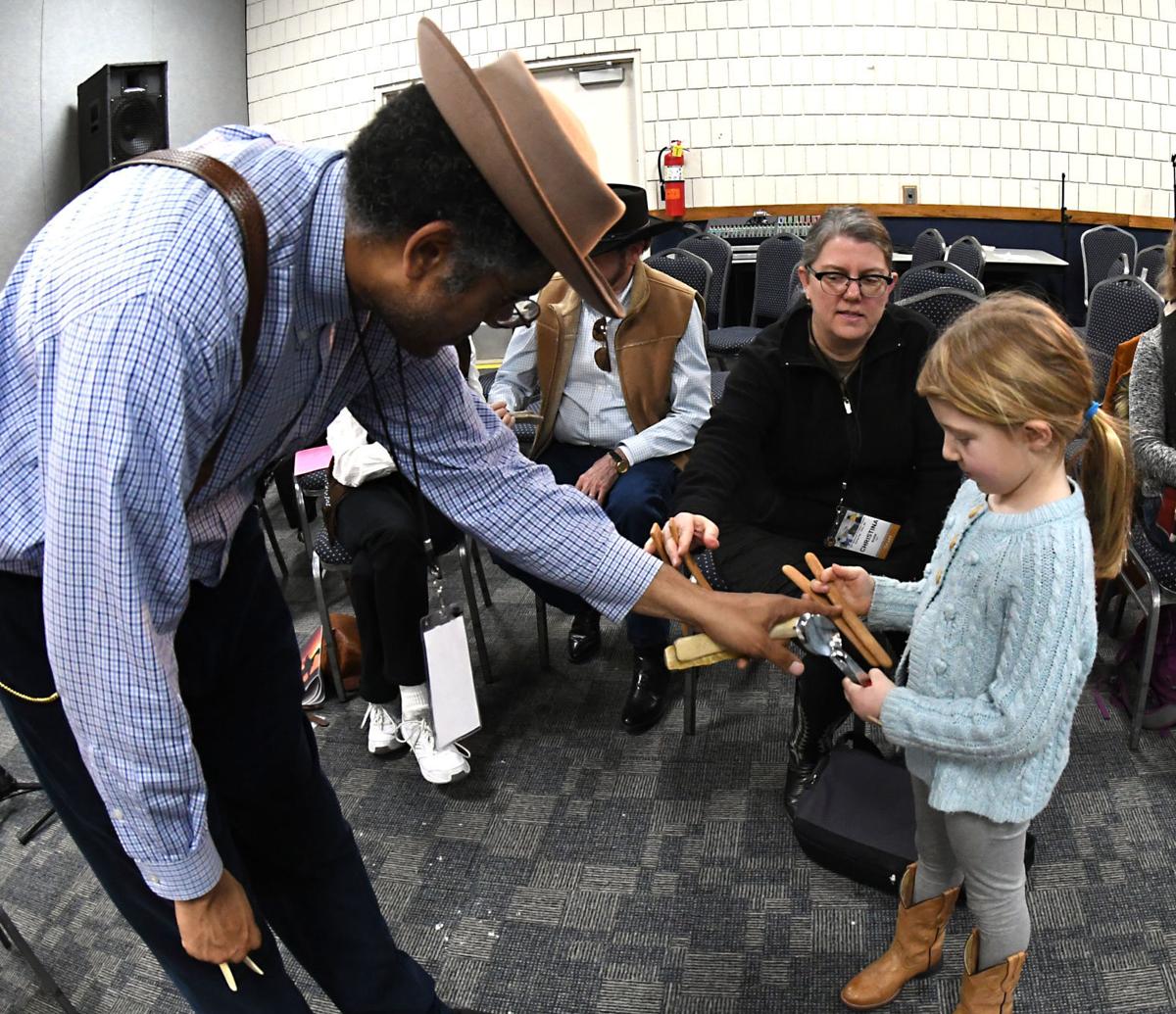 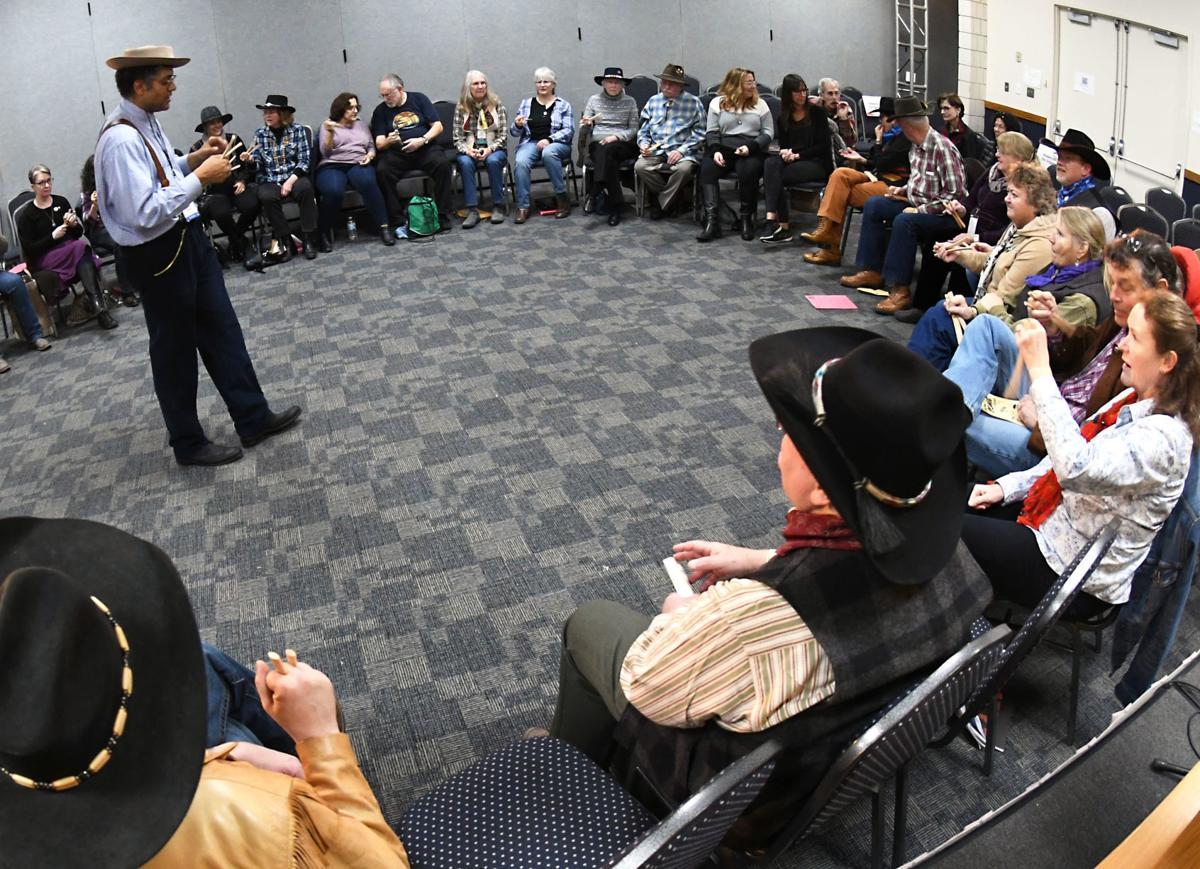 Dom Flemons explains the history of the bones as a musical instrument.

ELKO – The click and clack was slow at first as folks tried to catch onto the wrist action Thursday at Don Flemons’ bones workshop at the convention center.

About 30 people signed up for the one-hour course, and by the end of the lesson they were sounding pretty good. But, “make no bones about it,” not one of them was quite ready to hit the stage.

“Just get the beat first,” said a student who happened to also play the spoons. “Don’t do rolls and fancy stuff [in a jam session], or they will throw you out.”

Most of the participants purchased their bones from the Western Folklife Center gift shop. Thirty sets of light, brown bones were unwrapped, escaping the plastic packaging like some disjointed, primordial rib cage.

“The Americanized version, of course, became popular during the blackface minstrel shows of the mid-1800s and then it became an international phenomenon from there,” Flemons said.

He said the most popular song played using the bones is the theme song of the Harlem Globetrotters.

“A guy by the name of Freeman Stowers played four sets of bones in each hand,” Flemons said. “We’re not going to get that ambitious.”

Members of the class first raised their dominant hand and arranged the bones according to Flemons’ instruction. One woman claimed it was like “holding chopsticks.”

The group started off with an easy hit going outwards.

“The bones is all about ‘muscle memory,’” Flemons said.

Clicks randomly sounded throughout the room. As Flemons counted, a regular beat evolved.

“Is anybody not getting this?” he asked.

Between demonstrations Flemons did some fancy work with both hands, explaining that even he has difficulty with his right (non-dominant) hand.

The group practiced out of sync, sounding like a giant, manual typewriter clicking away.

Flemons told the group they could make their own bones. He said some people get their bones from a butcher and boil then broil them to remove the meat and dry them out.

“Or, some people just throw them up on the roof for six months,” he said.

Musician Dom Flemons instructs his students in playing the bones during the National Cowboy Poetry Gathering Jan. 30 at the Elko Convention Center.

ELKO – To learn the claw-hammer technique, you first have to form a C-shape with your hand.

Musician Dom Flemons plays a "little ditty" for students in his bones workshop.

Dom Flemons explains the history of the bones as a musical instrument.