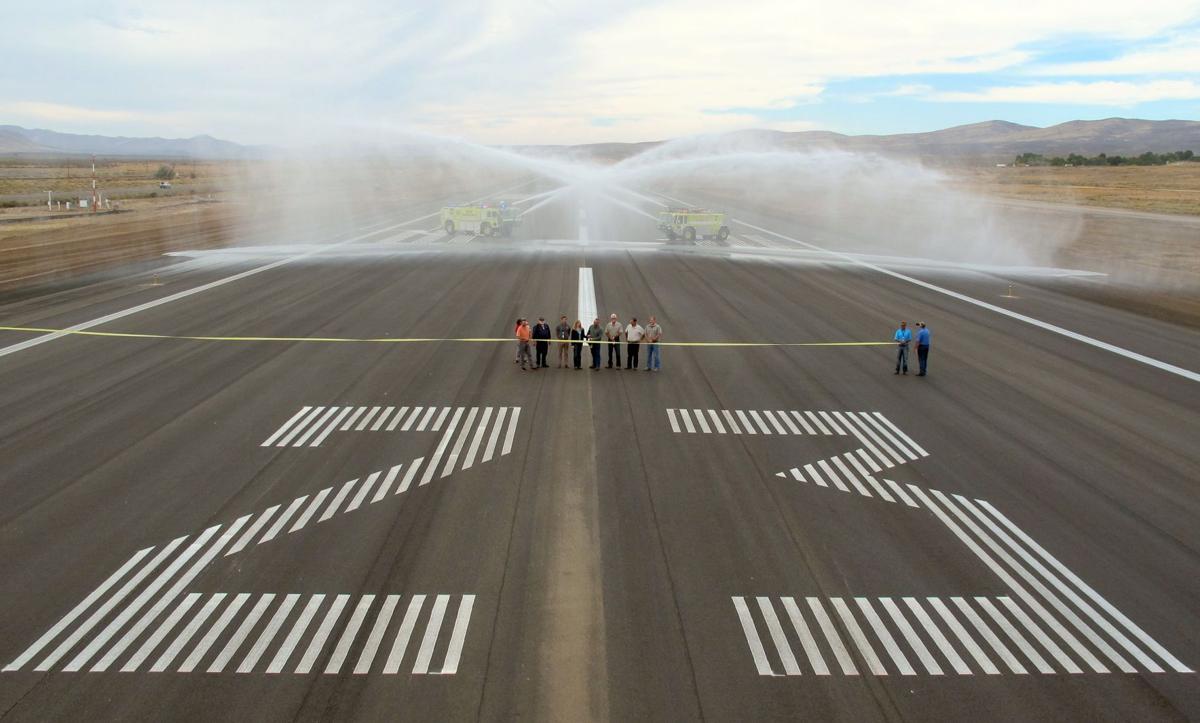 City and county officials gather Monday for a ribbon cutting ceremony for Runway 5-23 at Elko Regional Airport. Two trucks spray water on the runway behind them. 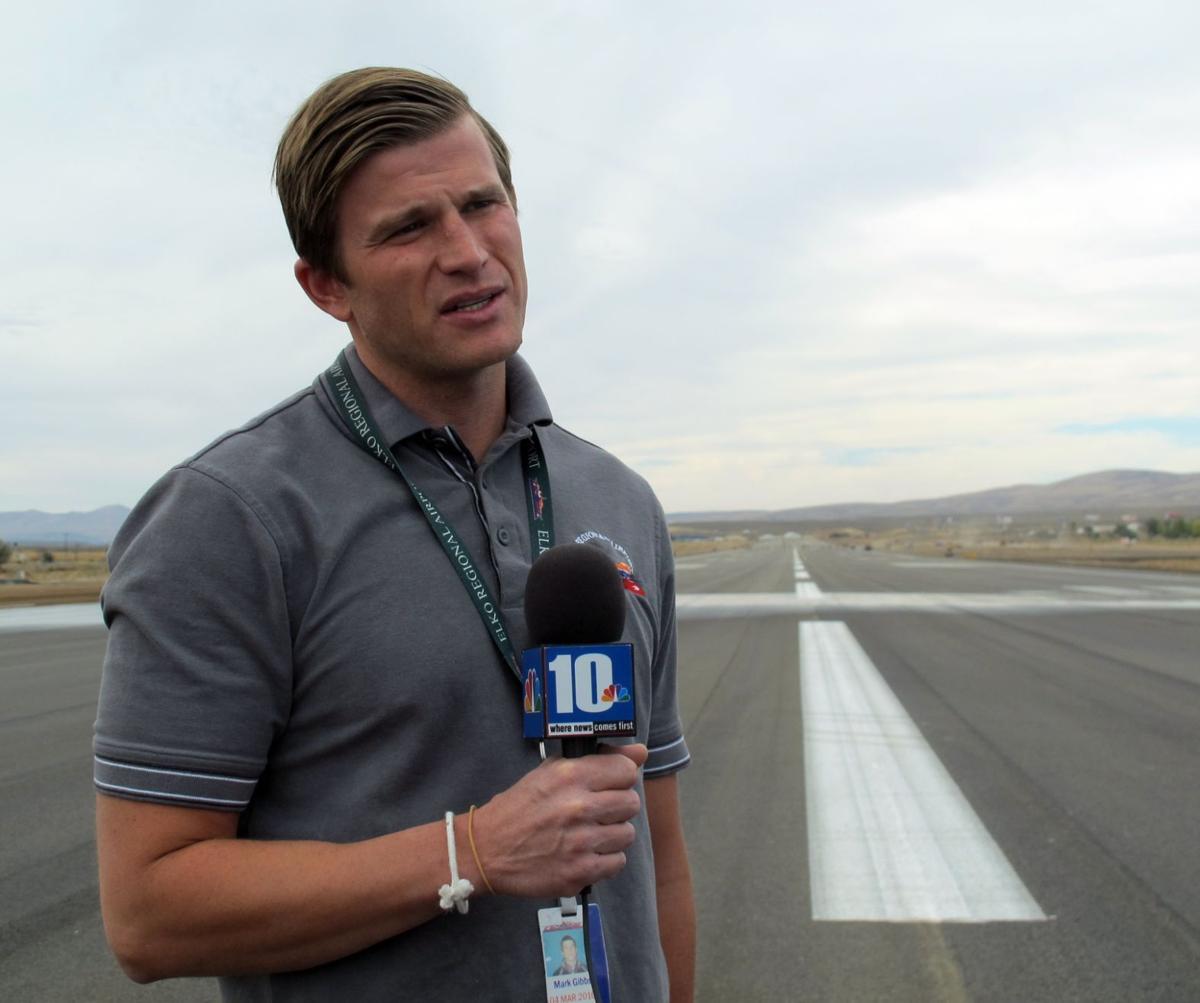 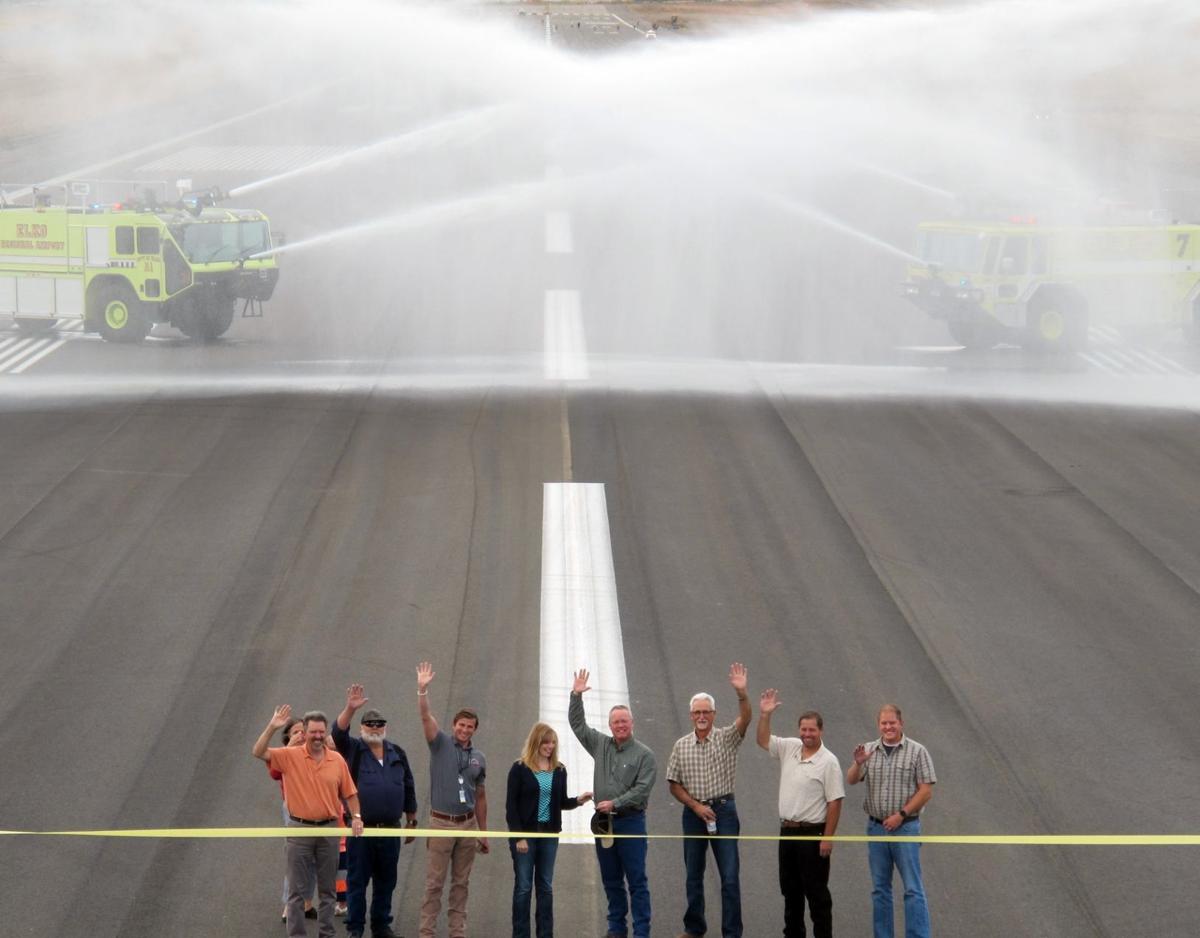 The runway had been closed since Aug. 17 in order for the second phase of rehabilitation to take place. The work included repaving 5,500 feet of the runway, which was last reconstructed in 1987.

Other improvements are a runway LED signage and lighting system and a Precision Approach Path Indicator on both ends of the main runway.

“We are on schedule and we’re currently under budget,” Gibbs said.

Work will continue into the spring, concluding with the renaming of Runway 5-23 to Runway 6-24, as a result of shifts in magnetic headings.

“There will be closures during the night while they are painting and grooving the runway,” said Airport Advisory Board Chairman Norman Rockwell.

Closures will last through November, but will not affect commercial flights, Gibbs said. The airport has two commercial round-trip flights per day between Elko and Salt Lake City.

The $9.6 million that’s gone into the project was largely funded by a Federal Aviation Administration grant, Gibbs said.

“The feds pay about 93.75 percent of the project, which means Elko gets more bang for their buck,” Rockwell said. “We want to see Elko progress with this airport project.”

This is the largest joint FAA and City of Elko project in 14 years.

“Without having this runway rehabilitated in a good state, we wouldn’t be able to have commercial air service,” Gibbs said.

On Monday, city and county officials participated in a ribbon cutting ceremony for the runway.

While one airline has expressed interest in providing an Elko-to-Reno flight, Johnson said the City will continue to build that relationship.

“In the first quarter of 2015, since we got the new jet, passenger traffic is up 7 percent,” Gibbs said.

During his time as a city councilman, Glen Guttry estimated the airport contributed $80 million a year to Elko, Rockwell said. Rockwell now estimates that number is even higher.

The runway reconstruction was completed with a hitch or two, including one incident Friday when a hot air balloon dropped in for an unexpected visit.

“They kind of crashed into our construction site,” Gibbs said.

This phase of the rehabilitation required 33,000 tons of asphalt and more than 100 workers, he said.

ELKO -- Flights to and from Elko have been unexpectedly cancelled for the next few days following an order from the Federal Aviation Administration.

ELKO — With the marking of Runway 5-23 completed and commercial operations resumed, City officials are still upset with the Federal Aviation A…

ELKO — Declining a request from local pilots to convert a taxiway to a runway, City officials voted Tuesday to move ahead with the last phase …

ELKO — If you’re planning to take a commercial flight out of Elko soon, you’re going to be grounded for a while.

City and county officials gather Monday for a ribbon cutting ceremony for Runway 5-23 at Elko Regional Airport. Two trucks spray water on the runway behind them.