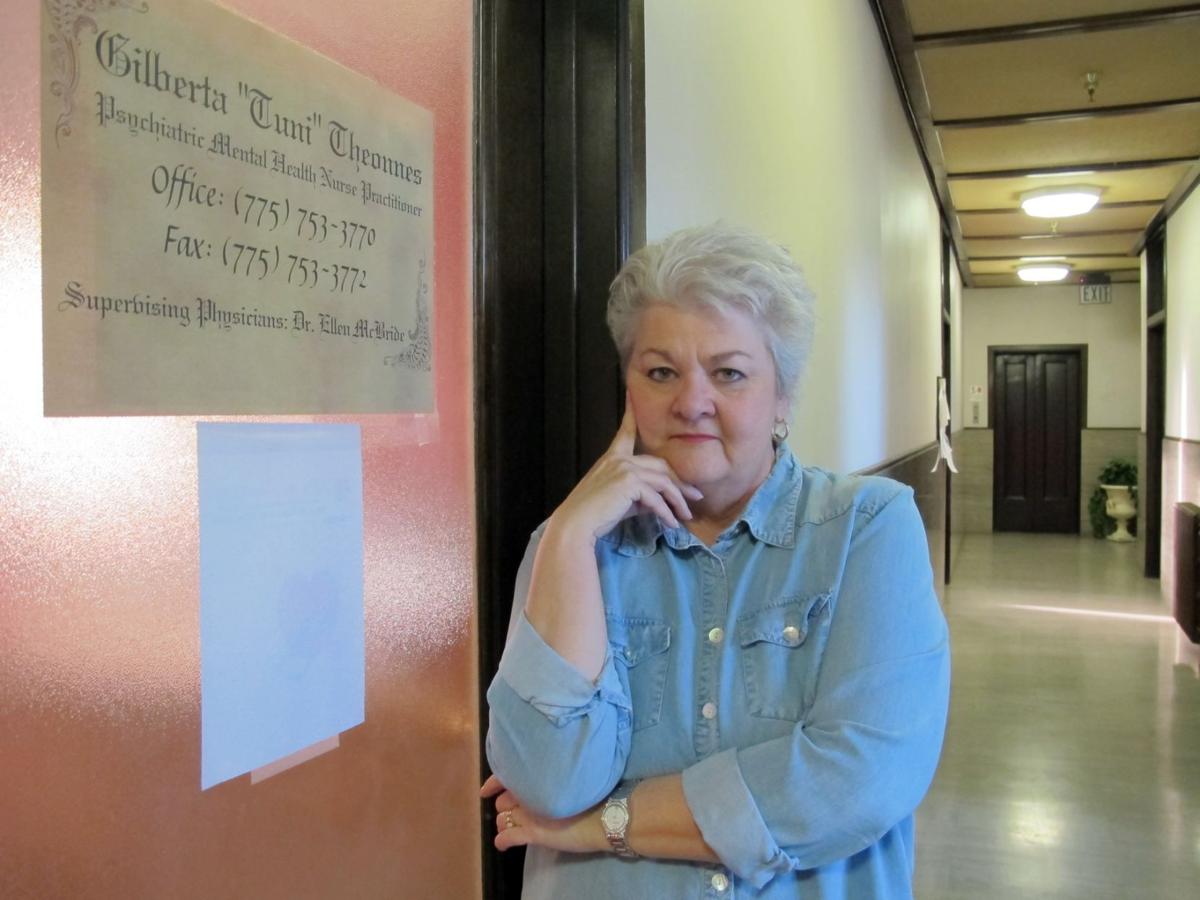 Gilberta “Tuni” Theonnes, a psychiatric mental health nurse practitioner, poses for a photo outside her office Thursday in the Henderson Bank Building. 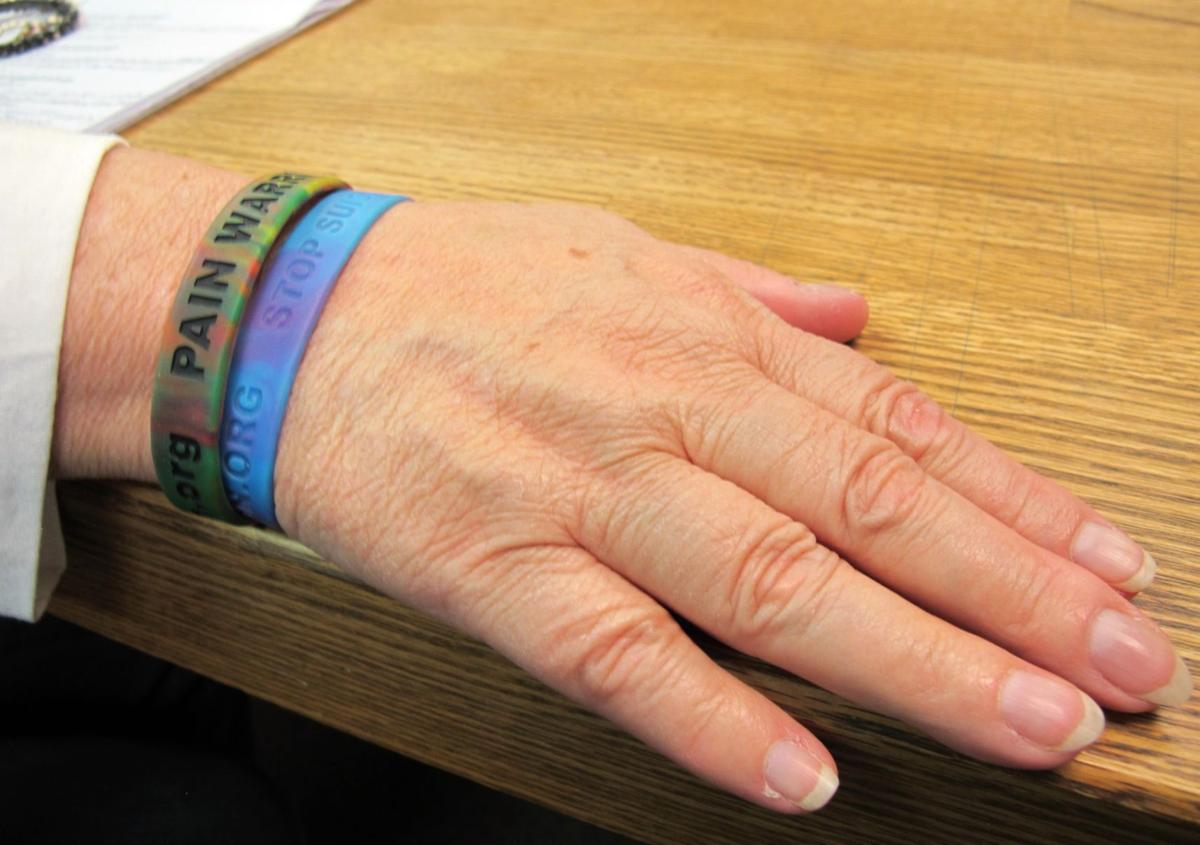 National Alliance for Mental Illness member Flora said she wears Pain Warrior and "stop suicide" bracelets because she has had personal struggles with pain and suicidal thoughts.

ELKO — Mental health providers in Elko are finding challenges in giving care to an overwhelming number of patients, and some say the available services aren’t enough.

“Right now to get an appointment with me, (we’ve) booked people into January and February,” said Gilberta “Tuni” Theonnes, a psychiatric mental health nurse practitioner.

She has about 2,000 charts and sees an average of eight patients a day.

“I don’t feel I can work any harder, for my mental health,” Theonnes said.

“There’s a dramatic lack of mental health care available in the area,” he said.

The only psychiatrist practicing in Elko, Ron Zedek, comes from out of town and holds office hours one day a month at Nevada Behavioral Solutions.

“I have a lot of people relying on me,” said Zedek, who is based in Las Vegas.

But one day may not be enough. Zedek offers psychiatric services and psychotherapy on an outpatient basis to people of all ages.

In the future, Zedek hopes to provide services two days a month instead of one. He also travels to Winnemucca once a month.

Some locations have selected to offer therapy via videoconference or Skype, Price said.

“Psychiatrists, unfortunately, are difficult to find,” he said.

The best resource for mental health providers in this area, Price said, is Elko Counseling and Supportive Services. Representatives from that office said they were unable to talk to the Free Press.

“I often feel like I walk in a very dark world,” she said.

The difficulty of finding doctors isn’t unique to Elko, but there are consequences to not having more services available. When waiting lists can be anywhere from a couple weeks to six months, some people are not getting care until it becomes imperative.

Northeastern Nevada Regional Hospital closed its behavioral health unit in February. CEO Rick Palagi told the Free Press at that time he believed most of the patients being treated there could be helped with intensive, outpatient therapy.

“Frequently, addiction goes along with mental illness because drugs and alcohol numb the pain,” said Flora, a local member of the National Alliance on Mental Illness (NAMI). “… You try to fix it with alcohol or drugs, or whatever is around. You get a short-time thrill from those things.”

She herself has intermittently suffered from prescription drug abuse.

Price said addictions are a physical or behavioral issue that can have a mental health component, or lead to mental health issues.

At least once a week, Theonnes is sending someone out of town for drug or alcohol detoxification. This often requires medications to control withdrawal symptoms. Alcohol and substance abuse is the biggest mental health problem in Elko, in her opinion, followed by depression, anxiety and psychotic disorders.

According to a 2010 study by CASAColumbia, 85 percent of the 2.3 million inmates in U.S. prisons and jails were substance-involved. In 2006, alcohol and drugs were involved in 78 percent of violent crimes, 83 percent of property crimes, and 77 percent of public order, immigration or weapons offense and parole/probation violations.

The study also found that only 11 percent of all inmates with addiction received treatment during their incarceration.

“What we really need in Elko is an intensive outpatient program,” where people can go after rehabilitation or detoxification, Theonnes said. “… The drug courts are overwhelmed.”

She believes drug and alcohol detoxification, an intensive outpatient program and medication management would be a multi-step solution to the problem of substance abuse.

Elko has recently benefited from a new psychologist at Indian Health Services, Theonnes said. She hopes he will be able to help alcohol and drug problems on the colony.

“He’s going to be good for our community,” she said.

Vitality Center—Ruby View Counseling Services in Elko has licensed drug and alcohol counselors to provide outpatient services for adults in Elko County. According to its website, the center’s philosophy is that “total abstinence from all mood altering substances is absolutely necessary for recovery from chemical dependency.”

Lynette Vega, facilitator for Survivors of Suicide in Northeastern Nevada, said it’s important people get treatment for depression before they become suicidal. But in Elko, getting help for this tends to also be delayed.

“You have to be suicidal to get immediate help,” Vega said. “… They need the help right away — not later.”

Zedek told the Free Press he has seen a lot more cases of bullying with his school-aged patients in Elko. Teen suicide may result from bullying, but can also be a result of other life pressures, Vega said.

Theonnes said peer pressure is a huge problem for teenagers, but acts of desperation happen because they lack a support system at home. Suicide, she said, becomes the solution when they don’t know how to deal with their problems.

“I believe that we have become a society where we expect instantaneous results,” Theonnes said.

With broken families, teens aren’t given the education they need to deal with hardships, she said.

With or without mental health services, several locals in Elko are catching on to a nationwide trend: peer-to-peer support groups.

“There is a growing movement in Nevada for it,” said Nancy.

Like Flora, Nancy is also a member of NAMI. Because the group operates on a basis of anonymity, the Free Press chose not to publish their full names.

“NAMI is a place where we go around the room where people can say what they feel like saying and other people provide feedback or just listen,” Flora said.

One of the things the group tries to combat is the “stigma” of mental health and the idea of “normalcy.”

For these and other members, talking about their problems with others who’ve experienced them is a huge relief. It also helps them fight their own tendencies to become isolated. The group meets from 5:30-7 p.m. every Thursday at First Presbyterian Church.

In Elko, there tends to be an idea of “rugged individualism,” Flora said. But many group members agree that mental illness isn’t weakness, it’s an illness. Everyone recovers at a different pace.

“The No. 1 thing you have to do is realize you have a problem,” Ronnie said.

It’s also important to recognize the warning signs of someone thinking about suicide, and if you are, talk to someone about it.

“Talking about it, even if we sound crazy, is better than doing it,” Flora said.

Lea Bastin became involved with NAMI after a mental health crisis with a family member. Since then, she’s become trained to start a family-to-family group. The 12-week, free courses begin in January for the families of someone with a mental illness. For information, email elkonamiclasses@gmail.com or call 775-389-0828.

Another resource in place for Elko residents is the Peer Alliance Network, a state group that hosts a conference call once a month. Its website is peerallianceofnevada.org.

For several NAMI members, what helped them on the road to recovery was a psychosocial rehabilitation group at Elko Counseling and Supportive Services, formerly Elko Mental Health.

“It focuses on social skills and living skills,” Nancy said. “A lot of us tend to isolate, and that’s huge.”

Nancy said it would be good to have that group in Elko again, because it allows for social contact in a safe place. The group was a huge part of her recovery, she said.

Another solution Nancy proposes for Elko’s mental health challenges is a mental health court. An article in The Atlantic stated these are alternatives to incarceration that are becoming increasingly popular to thin the ranks of sick, untreated inmates. Mental health courts sentence offenders to judicially supervised treatment.

While telemedicine is helpful for some patients, Flora said it is difficult for others.

“I’m not sure our generation would do (telemedicine) as well as younger people,” she said.

Still, sometimes just having a support group is its own therapy. NAMI is open to anyone, with or without a diagnosis.

“If you can’t afford to talk to a professional, come talk to us who’ve been through it,” Ronnie said.

Survivors of Suicide hosts day of healing for families

ELKO — The number of suicides in Elko County has steadily increased over the past few years, but a local group is working to spread awareness …

ELKO — With the closure of the Northeastern Nevada Regional Hospital Behavioral Health Unit, locals will have a hard time getting inpatient ps…

WH: We 'don't know' if Russians are playing games

WH: We 'don't know' if Russians are playing games

Gilberta “Tuni” Theonnes, a psychiatric mental health nurse practitioner, poses for a photo outside her office Thursday in the Henderson Bank Building.

National Alliance for Mental Illness member Flora said she wears Pain Warrior and "stop suicide" bracelets because she has had personal struggles with pain and suicidal thoughts.