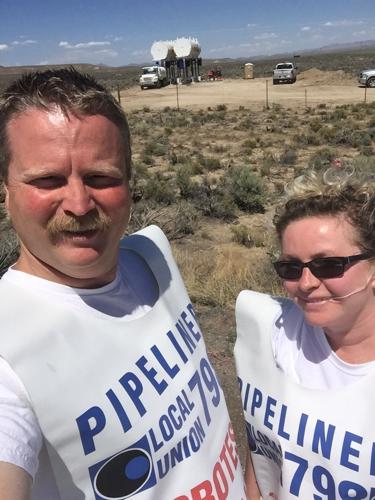 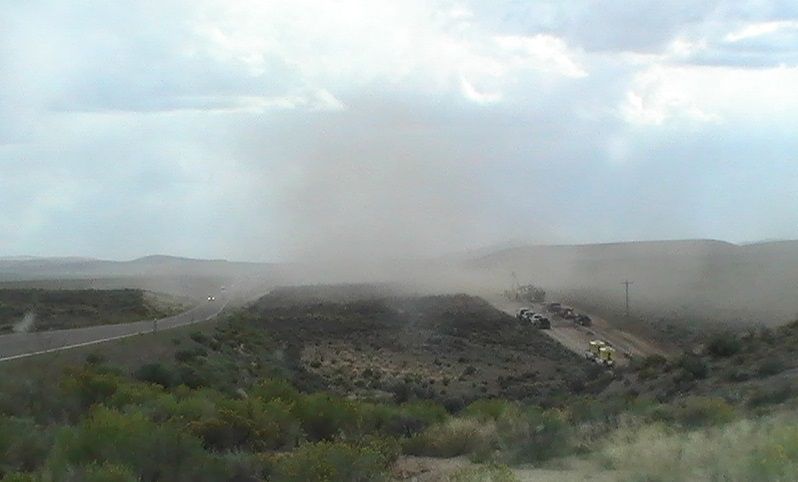 Dust from the Paiute Pipeline expansion blows over Mountain City Highway at milepost 58 earlier this month.

ELKO — Two labor unions are protesting work on the Paiute Pipeline project, saying the dust creates a hazard for workers and the contractor is not paying fair wages.

Arizona Pipeline is the general contractor on the project for Paiute Pipeline Co., a subsidiary of Southwest Gas Corp. The line will supply Elko with natural gas from the Ruby Pipeline installed four years ago by El Paso Corp. Construction is expected to be completed by fall.

According to weekly construction progress reports submitted to the Federal Energy Regulatory Commission, the company has had trouble with dust leaving the right of way.

“During hot dry afternoon conditions work activities in specific areas were slowed down or halted several times to allow for successful dust control,” Paiute Pipeline stated in multiple reports to the FERC.

Sonya Headen, communications administrator for Southwest Gas, told the Free Press in an email that multiple local, state and federal agencies work with the company to ensure the pipeline is installed in a “safe and environmentally responsible manner.” A surface area disturbance plan was reviewed and approved by several permitting agencies.

“We control dust in a number of ways, using water on the work site for dust suppression, minimizing traffic on the right of way, and using a palliative or tackifier in the water to help prevent dust from leaving the work site,” Headen said.

But Gilbert believes not enough is being done, and a lack of sufficient dust control is causing a danger to drivers on Mountain City Highway.

The Operating Engineers Local No. 3 union is also protesting the hazards. Neither union has members working on site, as Arizona Pipeline is not a union contractor.

“Our members requested that we take a look at this project,” Gilbert said.

Paiute Pipeline has reported several instances in which there was non-compliance of clearing, removing or spreading topsoil off the right of way onto Bureau of Land Management land.

Headen said Paiute has not received any citations, and has a full-time environmental inspector to ensure continuing compliance. Action is taken when concerns are identified, she said.

“Several agencies have performed onsite inspections and all of these agencies have determined that the project is being constructed within compliance guidelines,” she said.

The company reported multiple occurrences of non-compliance of dust control with “fugitive dust” generated by construction being carried off the right of way by high winds.

“We’ve observed them not watering sections of the right of way already,” Gilbert said.

The company stated work was halted at these periods to allow water trucks to regain control of surface conditions.

Gilbert said that aside from the dust, Arizona Pipeline is not paying its workers the same wages the unions would, and some employees are not receiving healthcare benefits.

Headen said Paiute engaged in a competitive bid process to award the construction contract for the project. The list of sealed bids included both union and non-union contractors, she said.

“A good contractor can’t compete with somebody if they don’t pay their wages,” Gilbert said.

Headen said Paiute does not set the wages and benefits that the contractors provide to employees for the project.

The unions have been actively protesting on the land for a couple of weeks. Allen Strong, business representative for Operating Engineers Local No. 3, alleged that at one point the general contractor closed off the public access gate to the land, effectively locking union representatives in.

Gilbert’s final complaint is that Arizona Pipeline has brought in a minimal amount of local workers and is not contributing much to the Elko economy.

“Generally, there are between 50 and 70 workers working at the project site and our understanding is that over one third of these are local Nevadans,” Headen said.

According to an earlier announcement from the company, “the project will provide a local economic boost through a variety of construction jobs for local contractors, materials and services provided by local businesses, as well as the use of local accommodations and restaurants.”

ELKO – Paiute Pipeline Co. has begun construction on a pipeline expansion project in the Elko area.

ELKO — The Bureau of Land Management has approved the route of a natural gas pipeline that will connect Elko with the Ruby Pipeline north of town.

Dust from the Paiute Pipeline expansion blows over Mountain City Highway at milepost 58 earlier this month.