Despite the warm days, the cold nights have helped keep the ice on area reservoirs at a safe thickness. Daytime highs are expected to continue to be in the mid to high 30s with the occasional day pushing 40 degrees. The nights are forecast to be in the low to mid-teens, continuing to keep the ice safe for the near future.

The 10-day forecast calls for unsettled weather with a chance for some much-needed precipitation. Unfortunately, it doesn’t look like we will get much precipitation, just spits and spats, but every bit helps with our low snowpack. Hopefully, the higher elevations will get more than the valleys which is generally the case.

Something to be mindful of, the wide ranges in temperature variation may contribute to pressure ridges forming, causing some weak areas along these ridges. Caution should be exercised near any pressure ridges.

There is a bright spot in the unsettled weather. Often this stimulates the fish to bite, especially right before the cold fronts move in. Cloudy days appear to produce more fish than sunny ones, though this is just a generality and is not set in stone.

Due to the time of year, expect few changes in the fishing reports from last week.

The ice continues to improve averaging between 10 and 12 inches as of Thursday and in some areas approximately a little more. The pressure ridges have settled down but still use caution around them. There is little snow on the ice or on shore so leave the snow machines at home. Very little change in fishing conditions though as anglers are doing well for both perch and trout. Perch were being caught in 25 to 35 feet of water using small plastic grubs or lures tipped with a bit of worm right off the bottom. Trout were being caught in shallower water, 10 to 12 feet, fishing about halfway up the water column. Location doesn’t seem to be as important as fishing conditions were similar in Penrod, Hendricks and off the state park boat ramp. Worms were working for trout. Many perch between eight and 11 inches are being caught. Trout were averaging between 14 and 18 inches. The river below the dam has low flows and the shorelines are icy but fishing the pools has been fair to good using streamer patterns and nymphs for fly fishermen and minnow imitation lures for spin fishermen. Wildhorse was stocked with just over 100,000 trout in 2020.

The lake has opened up along Jet Ski Beach and one person even launched a boat there this past weekend. Fishing there has been fair to good depending upon the day. In some areas, like the main boat ramp, the ice is averaging five to eight inches, while in others it is only a couple of inches thick. If you do decide to ice fish some of the areas, please make sure to drill test holes as you venture upon the ice due to the variable conditions. Due to the variations any pressure ridges should definitely be avoided. Fishing below the dam in the river has been slow with very low flows.

No recent report, but this lake often mimics South Fork so expect it to be covered in borderline safe ice. Expect the road to be 4WD only with the predicted precipitation.

The collection ditch has plenty of open water for fishing, but travel is through Secret Pass as Harrison is rough going. With the warmer weather and winds this week, much of the collection ditch has open water for fishing. Water level in the collection ditch is up, especially as you get closer to Brown Dike, which is good news for anglers. The water clarity is variable, being murky in some parts and clear in others. Anglers report catching fish averaging 12 to 16 inches at the collection ditch using egg patterns, balanced leeches, crystal buggers, #14 hare’s ears, and #16-18 PT nymphs. Other flies working include the usual small nymphs, olive soft hackles, red or blue copper Johns, and prince nymphs. Small brightly colored spinners were doing well for spin fishermen.

Jakes Creek is covered in ice except for a small patch of open water at the shallow end. By the dam there is seven inches of ice and anglers have been fishing through the ice with good results for 10-to-15-inch trout.

Cold Creek Reservoir has open water for shore fishing, with a few fly rodders catching some 10-to-15-inch trout using small nymph and chironomid patterns. Green or olive colors seem to be the best. A total of 4,050 rainbow trout were stocked into the reservoir in 2020.

Cave Lake is sitting approximately 15 feet below normal water levels and is fluctuating. While there is approximately 10 inches of safe ice, anglers are encouraged to use caution and drill test holes. If the ice is not in contact with the surface water of the lake, access on the ice is discouraged. Fishing has been fair for trout. The best method is a hook with worm or PowerBait three to four feet underneath a bobber or below the surface of the water.

Comins has 10 to 12 inches of good ice and fishing has been good for 16-to-18 inch trout and northern pike. Worms seem to work best through the ice though PowerBait is also catching some fish. Jigging with minnow imitations can also work. Anglers, please note that NDOW has placed radio tags in several Northern Pike. These pike will have an orange floy tag near their dorsal fin and a small antenna coming from their stomach. Please return these fish to the water for research purposes. If it doesn’t have the transmitter tag, please humanely dispatch the fish. Don’t put it back in the lake.

At last report, Illipah had about eight inches of ice and fishing had been fair to good. Black or olive jigs tipped with worms jigged slowly often works well through the ice here. Anglers may also have luck with just worms or PowerBait.

Snow, ice, and muddy bank conditions are making fishing difficult. With the colder temperatures, stream fishing is slow to fair. Expect the fish to be sluggish and anglers will need to put their presentations right in front of the fish and work them slowly. Stream flows have changed little in the last week and are still very low. As of January 21, the East Fork of the Owyhee has very low flows and is showing ice at the gauging station, the Bruneau River also showing ice and travel is not recommended here, the Jarbidge showing ice(access through Idaho), Salmon Falls Creek at 53 cfs, Lamoille Creek showing ice but a couple of weeks ago was at a low 3 cfs, the South Fork at a low 8 cfs with ice , Cleve Creek at 5 cfs, Steptoe Creek at 3 cfs and Kingston Creek at 2 cfs.

I have visited Jarbidge, in Elko County, a few times on hunting trips and with my family camping. The town is located at the bottom of the sce…

ELKO – Although the basic golf rates for the 2021 season at Ruby View Golf Course are the same as last year, five changes are being made at th…

Nevada’s outdoor recreation industry is hoping to recover this year, after the COVID-19 pandemic resulted in a fewer visitors to the Silver State.

When I hit the play button, the tape recorder booms out “Who who, who-who”. Cindy and I want to see a great horned owl so we have entered this…

Joe's Fishing Hole: Is your boat ready for the season?

While Wildhorse has 15 to 17 inches of good ice, South Fork Reservoir is almost completely ice free. It has some ice in a few coves, but the m…

The groundhog may not have seen his shadow this year, but that does not mean the mating season will be delayed for Nevada’s birds. In fact, so…

It is rare that a project is done in Lamoille Canyon strictly to enhance the enjoyment of visitors to the canyon, but a local Rotary Club did …

It looks like we are finally getting some much needed moisture. Just in time for the Wildhorse Trout Derby this weekend. So go prepared for so… 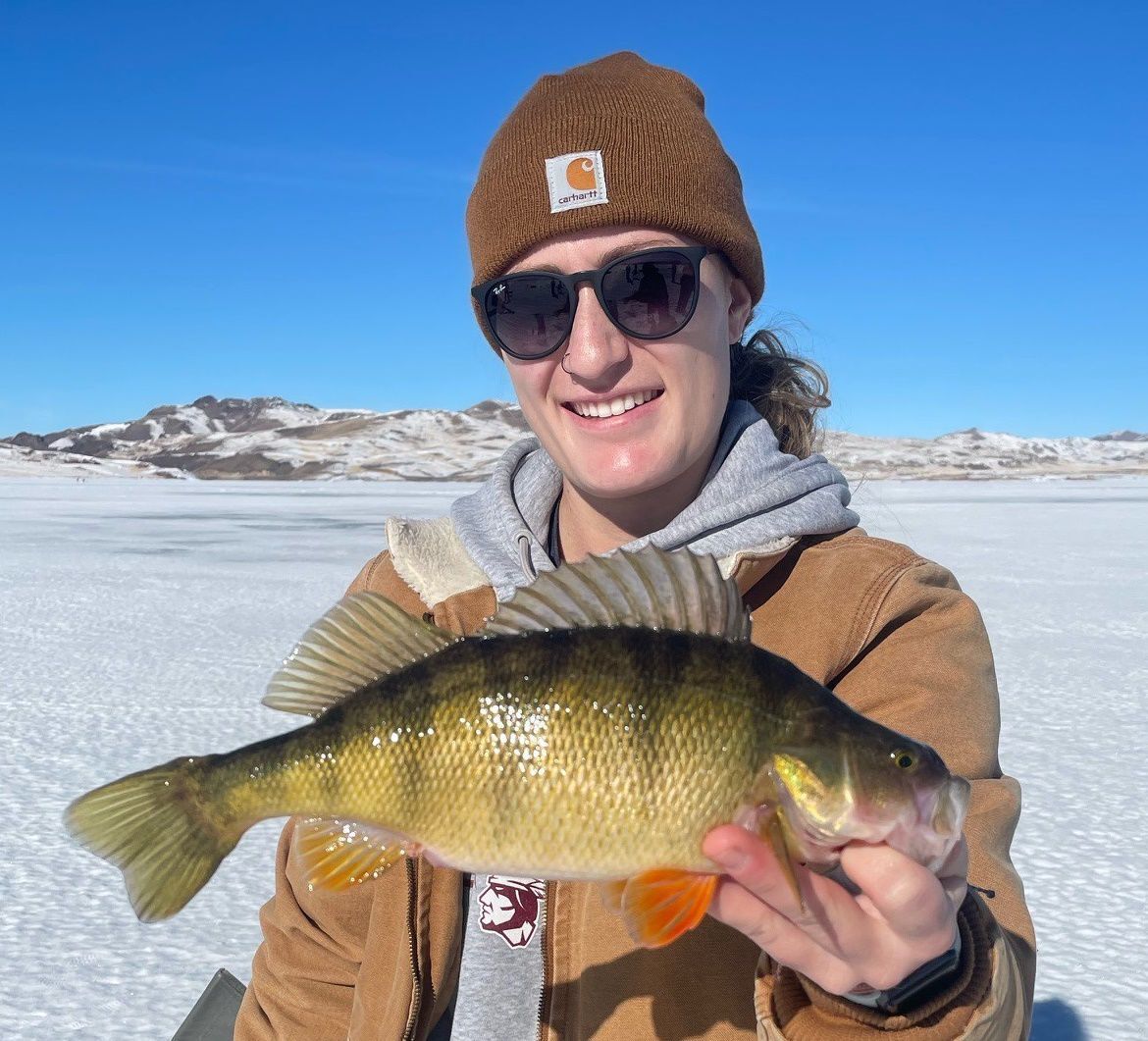 Reno angler Macy Brown shows off a beautiful trophy perch she caught last weekend at Wildhorse Reservoir. Perch fishing has been good and they are often caught right off the bottom in 25 to 35 feet of water using small jigs tipped with a piece of worm.