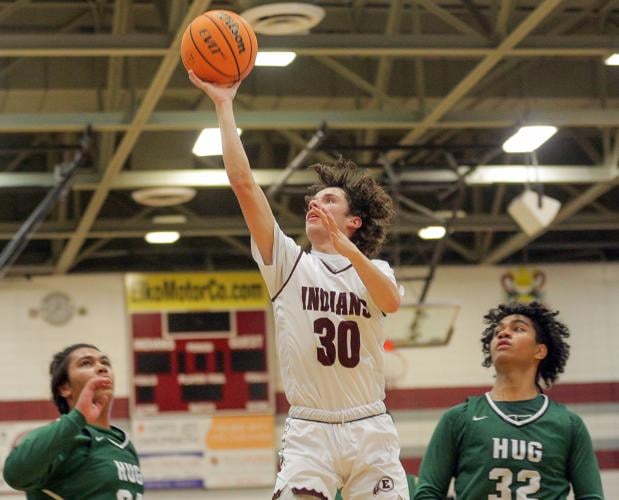 Elko's Jaxon Morrell drives the left side for a bank against Hug on Friday, Dec. 9, 2022, at Centennial Gymnasium. Morrell scored seven of his nine points in the first half, and the Indians opened Division 3A North play with a 58-18 victory. 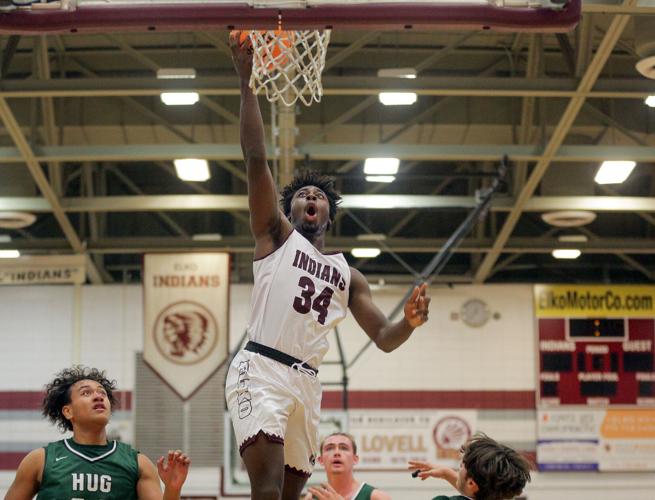 Elko's Jared Tinkorang rises over a Hug crowd for an And-1 on Friday, Dec, 9, 2022, at Centennial Gymnasium.

ELKO — After a 27-point loss in the finale of the Brent Stokes State Farm Insurance Classic against Reno, the Elko boys basketball team got back in track in its Division 3A North opener.

On Friday, the Indians shut down Hug and scored points in bunches for a 40-point, 58-18 victory.

Elko junior Preston Chamberlin opened the scoring after a slow start with a pump fake and pull-up jumper from the elbow, and Hug gained its first point at the line on a free throw from Connor Humphreys.

From the left corner, senior Chris Amaya gave the Indians a 5-1 lead with a three — Elko going up 8-1 on an And-1 plus the free throw for senior Jared Tinkorang from an outlet pass by senior Luis Rodriguez.

The Indians continued their dominant stretch with a corner trey by senior Anthony Atkins on a dish from Chamberlin, who made the score 13-1 with a jump hook in the paint.

Sophomore Jaxon Morrell kissed a runner off the glass from the left side on a reversal from junior Josiah Tinkorang, and the Indians closed the frame on a 14-0 streak with a free throw by senior Miguel Abarca after a Hug turnover.

Entering the second quarter, Elko was up 15 with the score at 16-1.

Jared Tinkorang opened the second with a strong down the left baseline for a deuce.

The Hawks reached the single bonus with 7:14 on the clock, and Ricky Pacheco made 1-of-2 free throws.

Hug got away with a travel but drew a foul, and Humphreys also connected on 1-of-2 freebies.

Nasoni Puteni was tied up but was awarded a foul call against Elko — the Indians’ ninth — with 6:17 remaining in the second quarter but a lane violation on the front end of the one-and-one nullified the trip to the stripe.

On the next possession, Puteni scored on the right block — Josiah Tinkorang responding with a put-back on the right side for the Indians for a 20-5 lead.

From a timeout, Amaya stuck a midrange J on a pass from Josiah Tinkorang on the offensive boards — Humphreys answering with a drive down the right side for the Hawks.

After another reset, Morrell pushed the Elko advantage to 25-7 with a three from the right wing.

Nobody stopped the ball, and Amaya penetrated for a bank on the right side — Tinkorang slicing his way for a roll around the rim and drop on the left edge.

The Indians moved the ball beautifully, leading to an easy score on the block for Morrell on a dish from Amaya.

With less than a minute remaining in the half, Amaya was hacked after grabbing his own miss — draining both free throws for a 33-7 lead.

Abarca went straight up but was called for a foul, and Pacheco took advantage with two free throws.

Opening the third, hug gained consecutive baskets on the block by Fred Fauolo.

After a stagnant start to the frame, Elko gained its first points with a series of pivots and a finish through a foul by Abarca — Amaya grabbing the missed free throw for a follow.

Amaya did more damage on the glass and earned another trip to the line, cashing both shots.

Josiah Tinkorang scored in the middle on a pass from Morrell, who then drove the lane for a floater.

Elijah Noguera was fouled and made one free throw for Hug, the third quarter ending with the Indians on top by 29 with the score at 43-14.

Noguera scored the first points of the fourth from the stripe, but the Indians dropped four in rapid fashion — Josiah Tinkorang making an acrobatic flip in the middle and Rodriguez scoring on a dime from senior Cai Alvarado.

Junior Bernard Fesenmaier went coast-to-coast for a layup on the left side — opening a 33-point lead — and the game turned into a running clock around the five-minute mark on a corner three by junior Braylon Baggett in front of the Elko bench.

Hug scored quickly on the other end, but Josiah Tinkorang knocked down a turnaround jumper from the left side for the Indians.

Atkins made four-consecutive free throws for a 40-point lead, and the Indians cruised to a 58-18 victory in their 3A North opener.

Elko’s offense was capped with four points for Chamberlin, three points each from Abarca and Baggett and two each by Rodriguez and Fesenmaier.

Hug was paced with four points each by Humphreys, Puteni and Fauolo — the Hawks’ scoring rounded out with three points apiece for Pacheco and Noguera.

The Indians (3-1) will close the weekend home stand with a 2:30 p.m. Saturday ballgame against North Valleys, at Centennial Gymnasium.

Elko looks for rebound against Hug

The Indians (2-1) will look to rebound from a rare loss in their preseason tournament against Hug (1-2) in the 3A North opener at 7:30 p.m. Friday, at Centennial Gymnasium.

In the end, turnovers, a lack of an offensive flow, missed free throws — Elko going 4-for-11 at the line — defensive lapses and missed shots culminated in a 56-29 loss for the Indians.

On Friday, Elko made plays when it had to and hung on for a 69-63 victory.

The Indians will step on the court and open their title defense in the season opener against Hunter — a Division 6A team from Utah — during the Brent Stokes State Farm Insurance Classic at 7:30 p.m. Thursday, at Centennial Gymnasium.

Elko fends off North Valleys in 2nd half

On Saturday, the Indians led North Valleys just 27-23 at the break but played big down the stretch and improved to 4-1 overall and 2-0 against 3A North opponents with a 61-44 victory over the Panthers.

The Indians (4-1) will open their East-West crossover series against the winless Vikings (0-3) at 7:30 p.m. Friday, in South Tahoe, California.

Elko will close the road trip versus Wooster at 2:30 p.m. Saturday, in Reno.

On Friday, the Indians cruised past South Tahoe with ease by a score of 55-29. Elko capped a perfect weekend with another lopsided victory Saturday, breezing past Wooster by 23 points in a 59-26 ballgame.

In its first contest, the Indians were absolutely blasted by Roy in a 64-27 blowout on Tuesday.

On Wednesday, the Indians then dropped a 46-37 ballgame to Judge Memorial (Salt Lake City).

Elko gave its best effort Thursday in a 41-34 loss to Kearns but followed with a 64-26 blowout loss to Riverton.

The Indians (6-5) will look to end a four-game skid in their league opener against Dayton (1-6) at 7:30 p.m. Friday, at Centennial Gymnasium, finishing the weekend home stand in a crucial contest versus Fernley at 2:30 p.m. Saturday.

SPRING CREEK — The Elko boys basketball team needed everything Tuesday night to pull out a victory over Spring Creek.

ELKO — On Friday, the Elko boys basketball team opened its home stand with a commanding victory — whipping Dayton by 54 points — the Indians s…

Elko boys hope to bounce back from sting

Elko's game against Lowry that was slated for Saturday has been moved to 7:30 p.m. Tuesday, at Centennial Gymnasium.

ELKO — The Elko boys basketball team rode a 35-17 advantage in the second and third quarters for a 76-56 victory over Fallon on Friday night.

Josiah Tinkorang tipped the ball to himself and banked home the biggest bucket of the ballgame for a 54-50 advantage with 13 seconds remaining.

Elko's Jaxon Morrell drives the left side for a bank against Hug on Friday, Dec. 9, 2022, at Centennial Gymnasium. Morrell scored seven of his nine points in the first half, and the Indians opened Division 3A North play with a 58-18 victory.

Elko's Jared Tinkorang rises over a Hug crowd for an And-1 on Friday, Dec, 9, 2022, at Centennial Gymnasium.