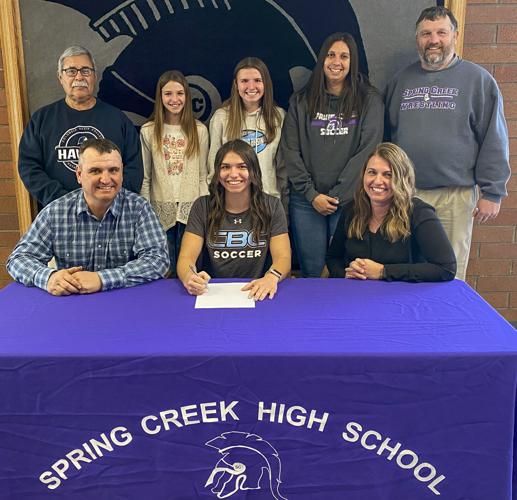 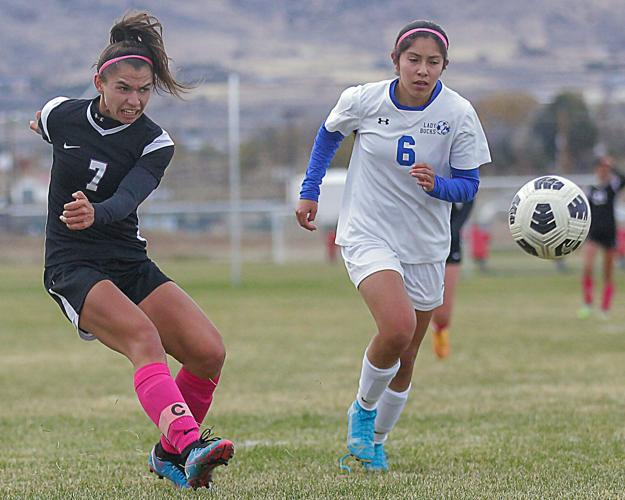 SPRING CREEK — Spring Creek senior Arena McDermott has been a mainstay for the Lady Spartans’ soccer program, a key component for some of the best teams in school history.

So, it should come as no surprise that she will continue her athletic career.

McDermott has signed her letter of intent to play at the next level for Columbia Basin College, in Pasco, Washington.

The Lady Hawks are a member of the Northwest Athletic Conference, freshly removed from an extremely-successful campaign.

Columbia Basin finished with a 15-2-1 overall record and a 12-1-2 conference mark, punching a ticket to the Final Four before losing 2-1 to Clark.

“They were very welcoming and it seems like a good fit,” she said.

She first came into contact with the school through Spring Creek head coach Kami Crowe and emailed back and forth.

AT CBC, McDermott is expected to play either on defense or in the midfield.

As for her studies, she plans to go into nursing — doing her perquisite classes at CBC and finishing elsewhere.

For goals, she hopes to “be a starter” and “make it to the Final Four both years.”

Transitioning to the collegiate level can be tough on the field and off the pitch as well, but Crowe thinks McDermott has the tools and the mindset to succeed.

“Her work ethic is amazing. She’s one of the hardest-working athletes I’ve been around. She has the willingness to play everywhere on the field,” Crowe said. “Arena never loses the ball, it’s like she has glue on her feet. She has great field vision; passing and running to receive a pass.”

High School Career FreshmanMcDermott’s varsity career began in her first year of high school, starting for a Spring Creek team that went 9-5-4 in league play and reached the 3A North semifinal before a 1-0 loss to South Tahoe.

She took two shots but served primarily as a defensive stopper.

SophomoreAs a 10th-grader, the Lady Spartans took their game to another level — winning the Division 3A North-East title — finishing 9-1-1 in a delayed, COVID-shortened campaign without a postseason.

She was part of a defense that allowed just three goals on the year and posted nine shutouts.

With just two shots on-goal, she stuck one into the net for the first goal of her high school career.

Once again, the Lady Spartans made the 3A North semifinal but came up a goal shy of a trip to state — losing 1-0 for the second-consecutive time to South Tahoe — a game in which she was unable to play in due to a positive test the week of the regional tournament.

On the year, her defensive prowess — smarts, athleticism, instincts and toughness — were her calling card, per the usual, but she managed to score two goals and dish two assists.

She earned 1st-Team All-League and 2nd-Team All-North selections on the defensive side of the field.

As a senior, McDermott served a multitude of duties for the Lady Spartans — who finished 10-10-11-1 on the season and 7-2-1 in league — leading a young group of girls, playing defensively and overlapping runs on the offensive side of the field as well.

Spring Creek’s season came to a close with a 3-0 loss to Truckee in the 3A North regional quarterfinal on Nov. 3, 2022, in Reno.

She capped her time with the Lady Spartans as a 2nd-Team All-League player.

Congratulations to Arena McDermott on a stellar high school career with Spring Creek during some of its most successful seasons, and best wishes at the next level with Columbia Basin College.

On Oct. 4, Lowry rolled to a 4-1 home win over Spring Creek — scoring the final four goals — but the Lady Spartans flipped the script and the …

The Spring Creek girls soccer team did not play its best ball Thursday against Fallon, but the Lady Spartans still managed a 1-0 victory and g…

The Lady Spartans will conclude their homecoming weekend with an 11:45 a.m. Saturday game versus Dayton.

The Lady Spartans will take on SECTA in their finale of the Spring Creek Cup at 11:30 a.m. Saturday.

WATCH NOW: Lady Spartans have to room to grow

“For having a lot of unknowns, I think we have a lot of room for growth,” Krowe said. “We have been pretty spoiled the last few years with the…

Following the conclusion of the Division 3A North-East girls soccer season, plenty of local players — and coaches — had reasons to celebrate s…

The Lady Spartans (9-0-1 in league) are the No. 1 seed of the Division 3A North-East, will receive a first-round bye for the 3A North regional…

SPRING CREEK — In its second league contest of the season, the Spring Creek girls soccer team breezed to a 2-0 record.

Lady Spartans pull away throughout

SPRING CREEK — In its Division 3A North-East opener, the Spring Creek girls soccer team scored in bunches — putting together goals in streaks …

SPRING CREEK — Following a 1-0 home loss Friday to Wooster, the Spring Creek girls soccer team did not bounce back with a victory Saturday — b…

Against Wooster, Spring Creek appeared out of sorts, out of system, consistently a step slow and fell to the Lady Colts by a final score of 1-…

The Lady Spartans will be at home for the start of the Division 3A North play, hosting Sparks at 4:45 p.m. Friday and following with an 11:45 …

SPRING CREEK — Coming off a league title during a delayed, shortened season, the Spring Creek girls soccer team has much to replace for the 20…

The Lady Spartans got back to basics — simplifying the game with fundamentals — and flurried with three second-half goals on their senior day,…

The Lady Spartans are playing for pride with no state championship on the line but a team that would have potentially reached the big tourney.

FALLON — It’s not over until it’s over, but the end was near.

ELKO — The girls soccer season came down to the last eight minutes.

SPRING CREEK — Despite not playing a game that pleased head coach Kami Crowe, the Spring Creek girls soccer team won its third game in a row.

Lady Spartans fire at will, draw

SPRING CREEK – After watching Incline’s weekend soccer games, it’s hard to believe the Lady Highlanders drove away from Elko County with a 1-0…

SPRING CREEK — Despite nearly half the roster comprised of first-year varsity players, the Spring Creek girls soccer team has a strength — speed.