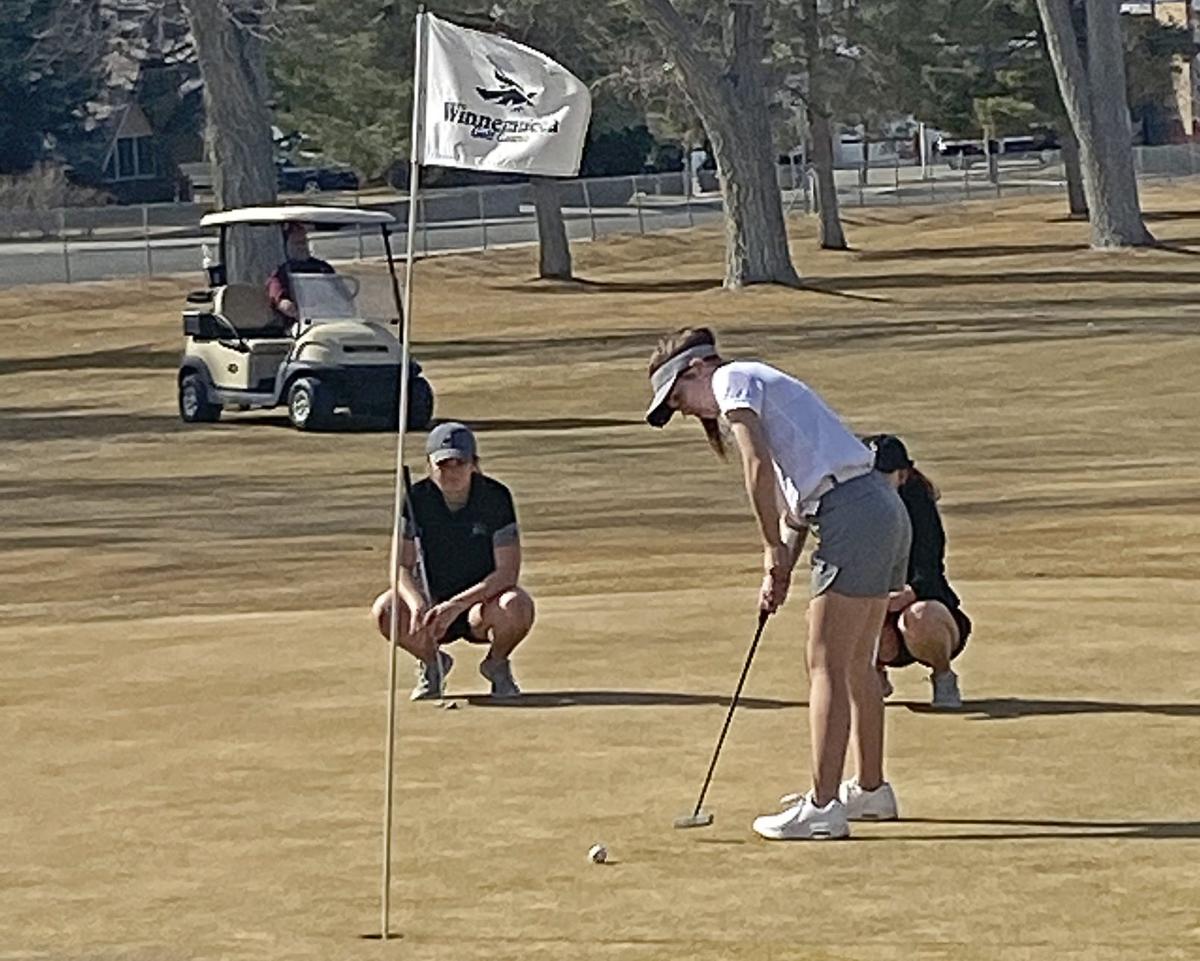 Elko's Gabby Bement strokes a putt Friday, March 5, 2021, during the Lowry tournament, in Winnemucca. Bement won first place by 14 strokes with a score of 83 and tied her personal-best round from the 2019 Elko tournament. As a team, the Lady Indians finished in second place with a four-girl score of 433. 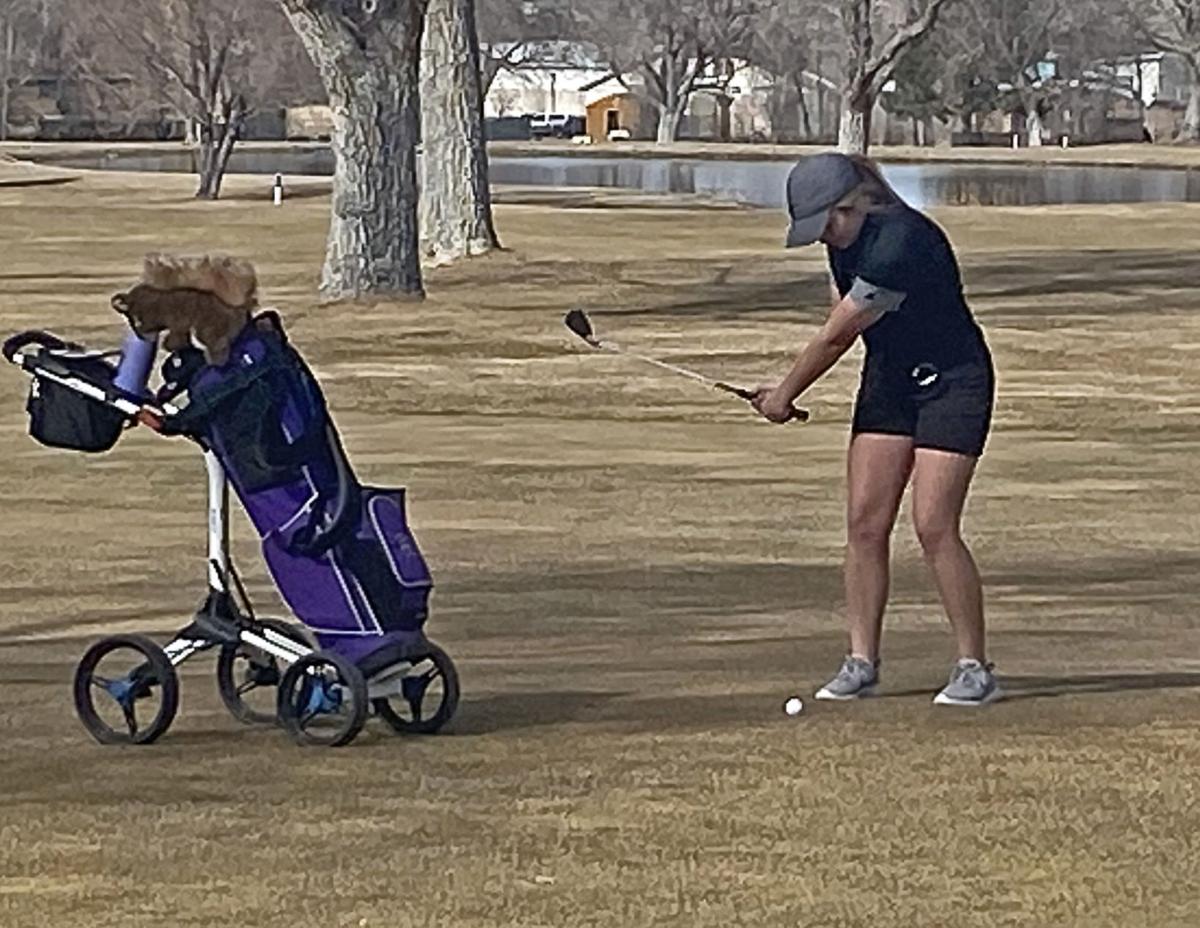 Spring Creek's Jordan Maher hits a chip during the Lowry tournament on Friday, March 5, 2021, in Winnemucca. Maher shot a round of 110 for the Lady Spartans' third-best score, and Spring Creek took third as a team with a collective total of 435.

WINNEMUCCA — One tournament into the Division 3A North-East girls golf season, and a few things are apparent.

A: Elko senior Gabby Bement is one of the best girls golfers in the state.

B: The Lady Indians will find defending their 2019 state championship — no state tournament planned — very difficult.

C: Other teams in the league — Lowry and Spring Creek — showed Friday that they will make the Lady Indians step up if they hope to repeat as league champions.

On Friday, in Winnemucca, Lowry locked down a convincing victory on its home turf — shooting a collective round of 412 for a 21-stroke win.

Elko — led by Bement’s individual championship of 83 — finished second with a four-girl card of 433 and barely fended off a game Spring Creek bunch and its 435 for third place.

“Watching Gabby was a lot of fun. She has put in a lot of work in the offseason. She had 31 putts, some tough pin positions and had a couple lip out,” said Elko coach Jeff Sarbacker. “On the eighth hole the second time around, she hit her drive straight down the middle — dissected the fairway — and was 150 yards out, hit her 6-iron to within 2-feet and tapped in for birdie. In sports, we wait for those moments of perfection and she couldn’t have played that hole any better than that. It’s something I’ll always remember.”

Second place went to Lowry freshman Piper Nichols, who posted a sub-100 round of 97 in her first high school event.

The Lady Buckaroos did the bulk of their damage with their top-three, as junior Bailey Hayes was a stroke behind Nichols’ 97 with a 98 of her own for third place — senior teammate Angelina Martinez also finishing a stroke below the century mark with a 99 for fourth.

The top-five was capped by a pair of 106s from Spring Creek teammates Jaedin Martinez — a junior who will graduate this year — and junior Holland Miller.

For the Lady Spartans, their third score was swung by senior Jordan Maher — who closed the round with a tally of 110.

Spring Creek’s top-four qualifying scores ended with a 113 from the clubs of junior Elexia Mauer.

Bement’s 83 was 30-strokes better than Elko’s No. 2, as junior Julianna Lozano finished the first round of the season with a 113.

Senior teammate Katrina De Guzman notched the Lady Indians third-best score with a 116, and Elko’s qualifying totals were closed with a 121 from sophomore Madison Stewart.

In a non-qualifying total, Spring Creek junior Andy Moore posted a card of 129.

For the Lady Indians, their roster was rounded off with a 131 by sophomore Reganne Wakefield and a 153 from sophomore Gabby Peracchi.

“Everyone was a little rusty. They haven’t played in quite a while, but we came in second,” said Sarbacker. “It was good for them to get out and play, but we have some work to do.”

Fallon, which did not post four scores for a team total, was led by a 107 from junior Lainee Reid for seventh place overall, a 116 by junior Gabby Loop and a 146 from freshman Hannah Benjamin.

The girls of the 3A North-East will have a quick turnaround, as the second event is just days away — teeing off at 10 a.m. Tuesday, in Fernley.

Lady Spartans have time to build

SPRING CREEK — While the fall season has rapidly approached as spring nears, the Spring Creek girls golf team has time to build a quality team…

There was a familiar atop the leaderboard of the Fernley girls golf tournament, as Elko senior Gabby Bement won her second event of the season in two tries.

DAYTON — For the first time of the 3A North-East girls golf season, Spring Creek climbed to second place in an event.

FALLON — For the first three tournaments of the 3A North-East girls golf season, Lowry stood atop the standings every time.

SPRING CREEK — Both the Elko and Spring Creek girls golf teams have reasons to celebrate after Tuesday’s tournament.

ELKO — Over the course of the past decade, the Elko girls golf team has been one of dominance — claiming three state championships (2011, 2016…

After an abbreviated season — which was delayed from the fall of 2020 — Spring Creek hopes to build on the success it made during the awkward year.

Elko's Gabby Bement strokes a putt Friday, March 5, 2021, during the Lowry tournament, in Winnemucca. Bement won first place by 14 strokes with a score of 83 and tied her personal-best round from the 2019 Elko tournament. As a team, the Lady Indians finished in second place with a four-girl score of 433.

Spring Creek's Jordan Maher hits a chip during the Lowry tournament on Friday, March 5, 2021, in Winnemucca. Maher shot a round of 110 for the Lady Spartans' third-best score, and Spring Creek took third as a team with a collective total of 435.