WELLS — Despite the season ending without a trip to the 1A state tournament, the Wells volleyball team had a great season.

In fact, the Lady Leopards garnered a League MVP — Wells’ second in as many seasons — and another Coach of the Year honor.

In her final season, senior Jackie Berumen was selected as the 1A East Player of the Year after a 2nd-Team All-League nod during her junior year.

She played a vital role in leading the Lady Leopards to an undefeated season in league play with a 10-0 record, Wells finishing the year with a 20-9 overall mark.

She smacked the second-most kills on the roster, finishing with 105 putaways.

Berumen also terrorized opponents with her serves, firing off 37 aces.

Defensively, she made her presence felt with 16 blocks for kills — also assisting 23 blocks.

When not denying shots at the net, she dug up 217 shots in the back end.

Wells senior Aubrey Durant — the 2018 League Co-MVP — passed the torch to Berumen for the top honor during the 2019 season.

However, Durant still played at an MVP level for the Lady Leopards.

Doubling as a facilitator and a finisher, Durant closed No. 1 on the roster in assists, kills and aces.

She dished 205 assists — sending a number to Berumen — and hammered a team-best 109 putaways.

Behind the service line, she smoked a team-high 47 aces.

After an honorable mention as a sophomore, Wells’ Megan Morgan really found her stride as a junior — splitting setting duties with Durant.

She was remarkably consistent and deadly beyond the end line, successfully placing 95 percent of her serves into play and stringing up 40 aces.

Morgan was second on the team with 179 assists.

When she attacked offensively instead of setting her teammates, she drove 81 kills.

Jackpot senior Bryanna Rios led a young Lady Jaguars roster into the posteason with a 4-6 record in the 1A East.

Playing both middle hitter and outside, she paced the offense with 36 kills.

Rios made 65 digs defensively and blocked a total of 14 shots.

Serving the ball, she ripped 15 aces.

“(She) plays with heart each and every play. Bryanna was committed to make this season one to remember. She leaves every play on the court,” said Jackpot coach Doug Hutchison. “She played every spot on the court and never let the ball hit the floor with an attempt. She has a quiet personality but strong leadership qualities.”

A young roster and a midseason coaching change?

Finishing the season with a 7-3 record in league play, Owyhee embarked on an unlikely run to the state tournament — falling in the 1A South-East regional championship and once again in the 1A state semifinal.

Of Owyhee’s nine girls on the roster, eight will return next season — including Paradise, three-current sophomores and two-now freshmen.

*Head coach Robby Tate said he did not have season stats for his 1st-Team All-League athletes.

Wells freshman Jillian Rodriguez wasted no time, making an immediate impact for the Lady Leopards as a middle blocker.

Offensively, she put away 78 shots and served 19 aces.

Senior outside hitter Vanessa Solis was found everywhere on the floor in her final season with the Lady Leopards.

She doubled as a defensive-offensive combination.

Solis closed the season with 262 digs, blocking 18 shots in total.

On offense, she thumped 78 kills and served 19 aces.

Along with Rios, the Lady Jags rode the coattails of their other senior co-captain.

At setter, Ariana Miramontes topped the roster with 92 assists.

When hitting, she added 17 kills.

“She was one of the top servers on the team,” Hutchison said. “She was always moving on the floor and never gave up.”

Carlin senior captain Lachelle Doxey closed her career with a 2nd-Team All-League nod after improving from an honorable mention during her junior season.

The Lady Railroaders have not posted stats and head coach Allison Coppinger was unavailable to send any particulars.

She closed the year with a remarkable and team-best 275 digs.

Paired with young power in Rodriguez and Garcia at the net, the Lady Leopards will also benefit from quickness and defensive proficiency in the backline.

As a sophomore, libero Falen Iveson reacted well to shots and passed effectively to the setter.

The Lady Jaguars will also welcome back young talent.

“Luz finished the season strong, with high hopes for the 2020 season. She didn’t let many balls hit the floor,” Hutchison said. “She was a great all-around player, and I look forward to her future in volleyball.”

On the opposite side of the floor, Jackpot can be excited about the potential of freshman Sinceer Torrero.

She made 23 putaways and served five aces, posting 44 digs and four blocks.

“Sinceer gave 100 percent each and every day at practice and during the games. She was one of the top passers on the team and assisted with many kills,” Hutchison said. “I see great things for Sinceer in future years.”

Sophomore hitter JosieRose Thomas and junior middle blocker Julie Woods will provide both experience and future success for the Lady Braves, who bring back eight of their nine girls on the team that already reached the 2019 state semifinal.

Carlin junior Akilah Leach will be the leader of the 2020 Lady Railroaders, who are also extremely young — graduating just three of 16 girls in the program — including seven-current freshmen.

ALAMO — Never mind the fact that the Owyhee volleyball team did not win its conference, the Lady Braves are extremely young — just one senior …

EUREKA — The Lady Leopards finished the regular season at home, Wells making its final match in front of its fans count.

WELLS — Without a doubt, the most significant win of the Wells volleyball team’s season thus far came on Sept. 19.

WELLS – Fittingly, the best players on the best teams in the league shared MVP honors. 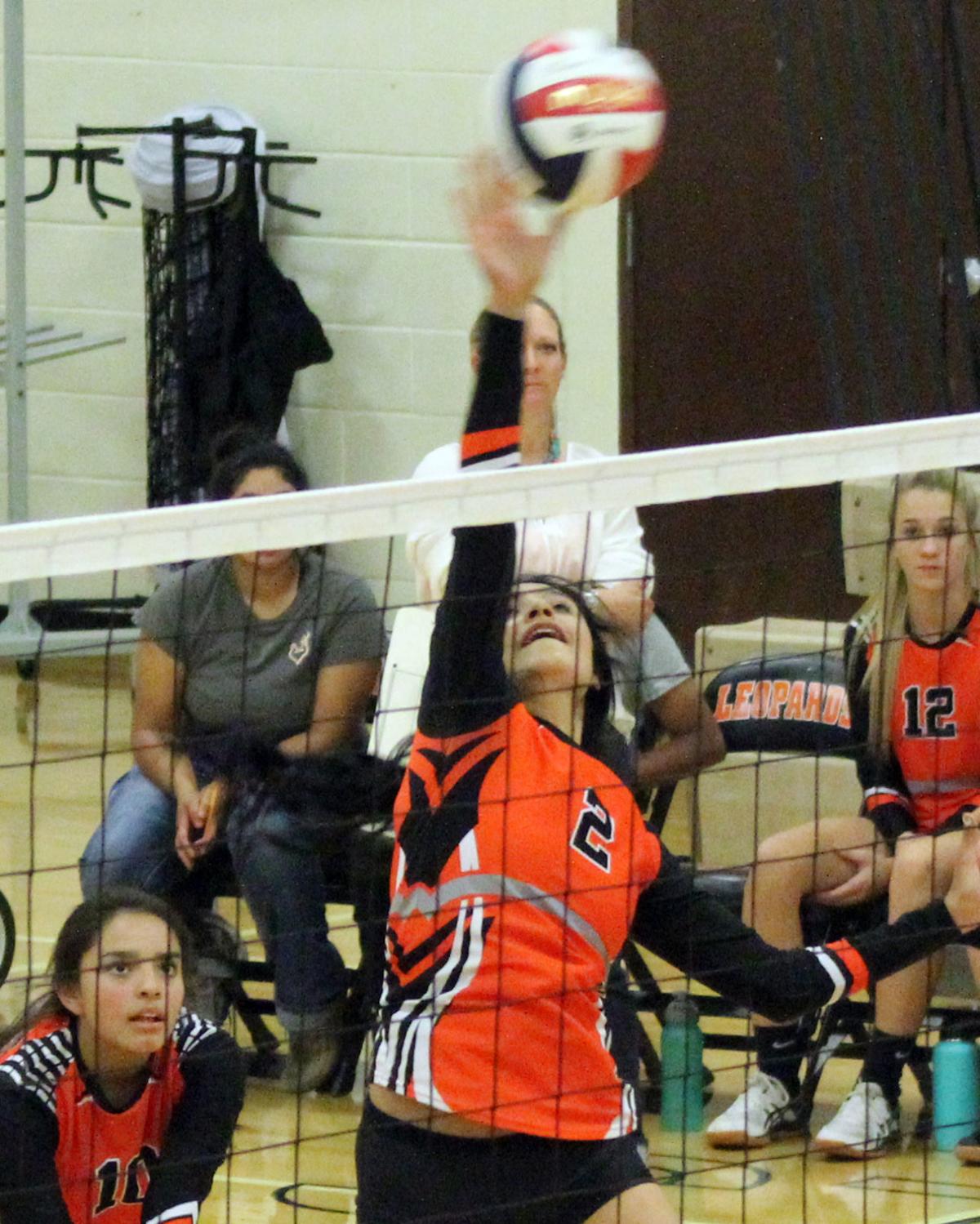 Wells Jackie Berumen hits a shot at the net against the Spring Creek junior varsity on Sept. 24, 2019, in Wells. Berumen was named the Division 1A East Player of the Year. 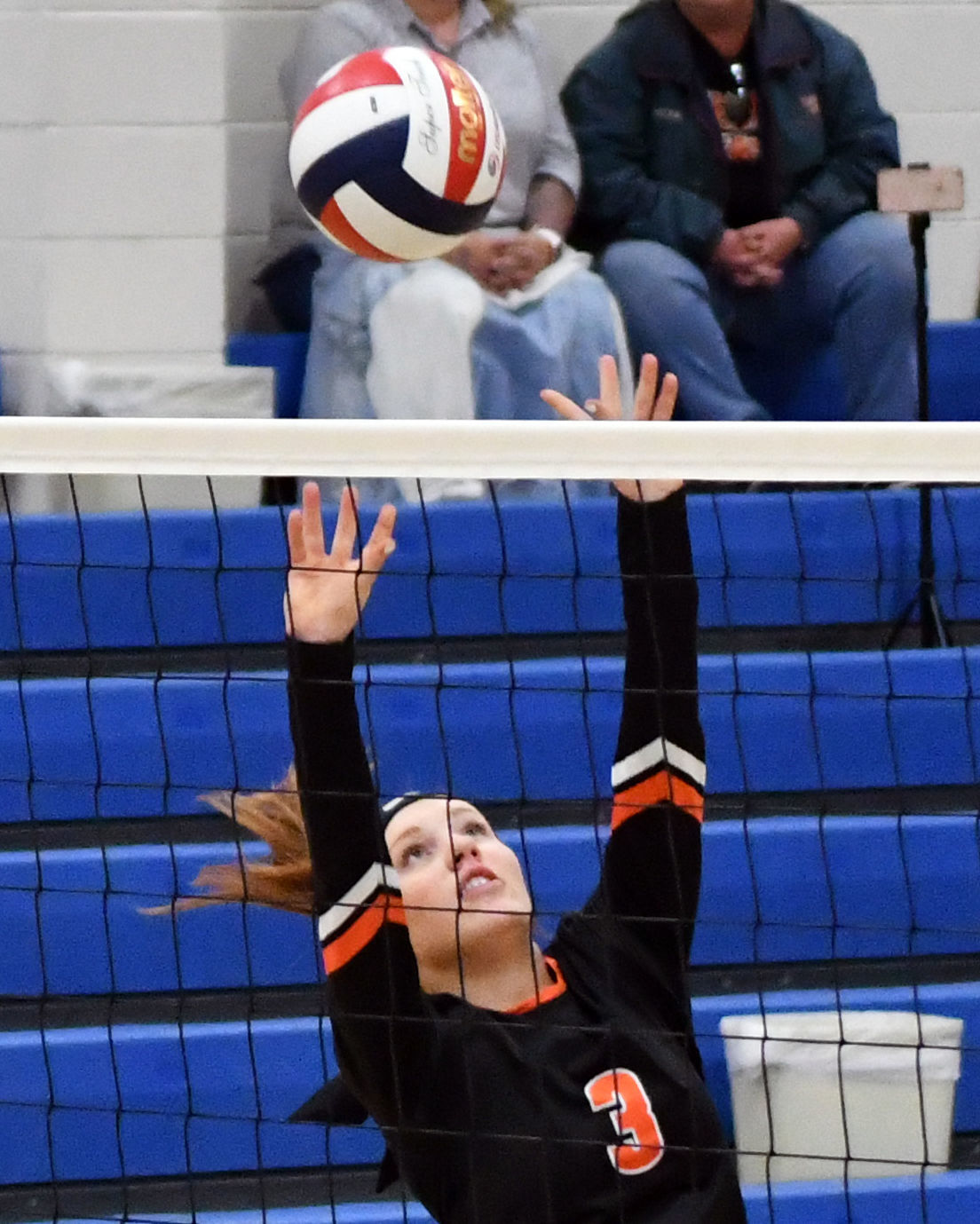 Wells' Aubrey Durant sets a ball on Sept. 28, 2019, during a three-set victory in McDermitt. Durant, the 2018 1A East MVP, finished her senior season with a 1st-Team All-League selection as a setter. 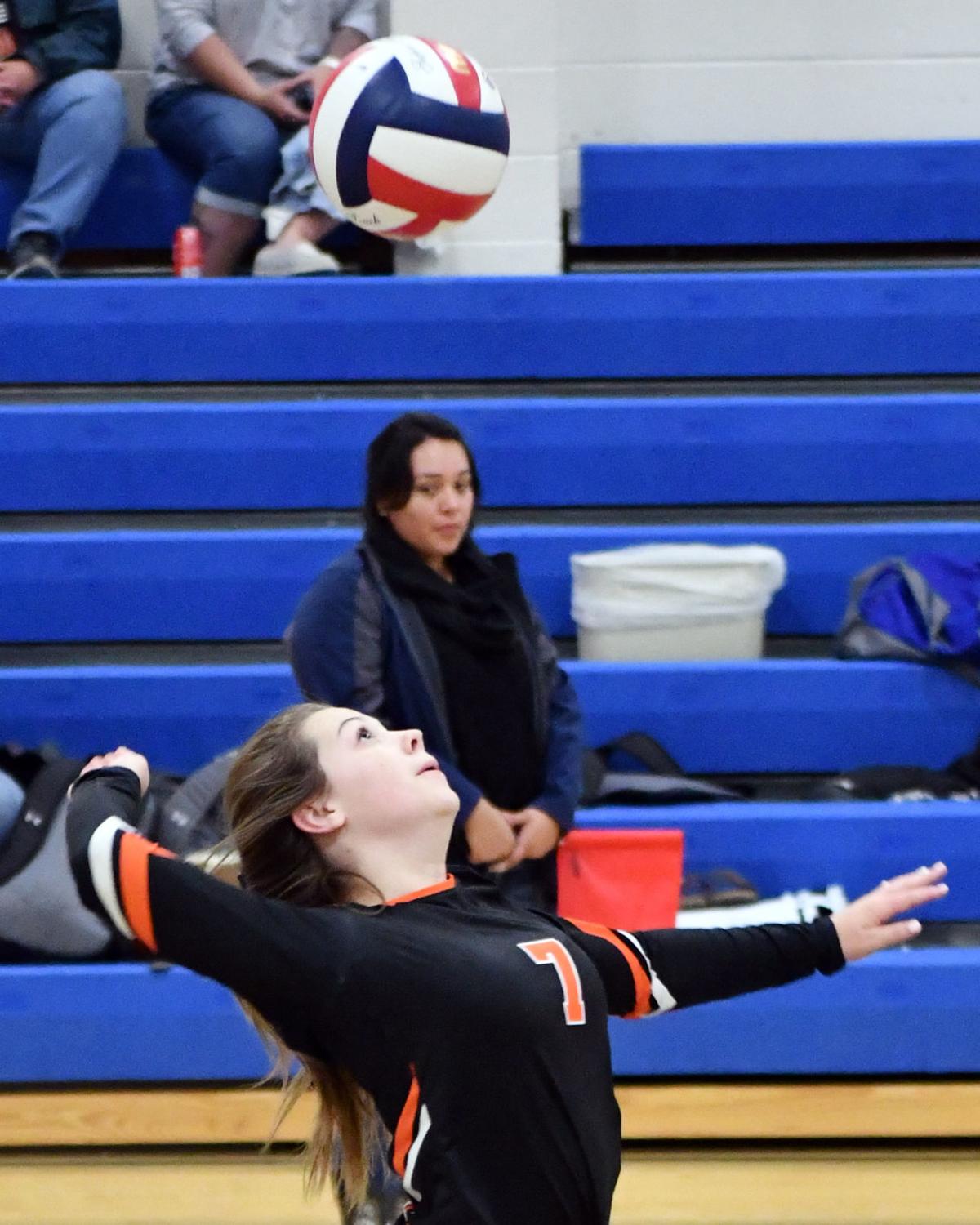 Wells' Megan Morgan reaches up for a serve on Sept 28, 2019, in McDermitt. As a junior, she finished her season with a 1st-Team All-League selection of the Division 1A East. 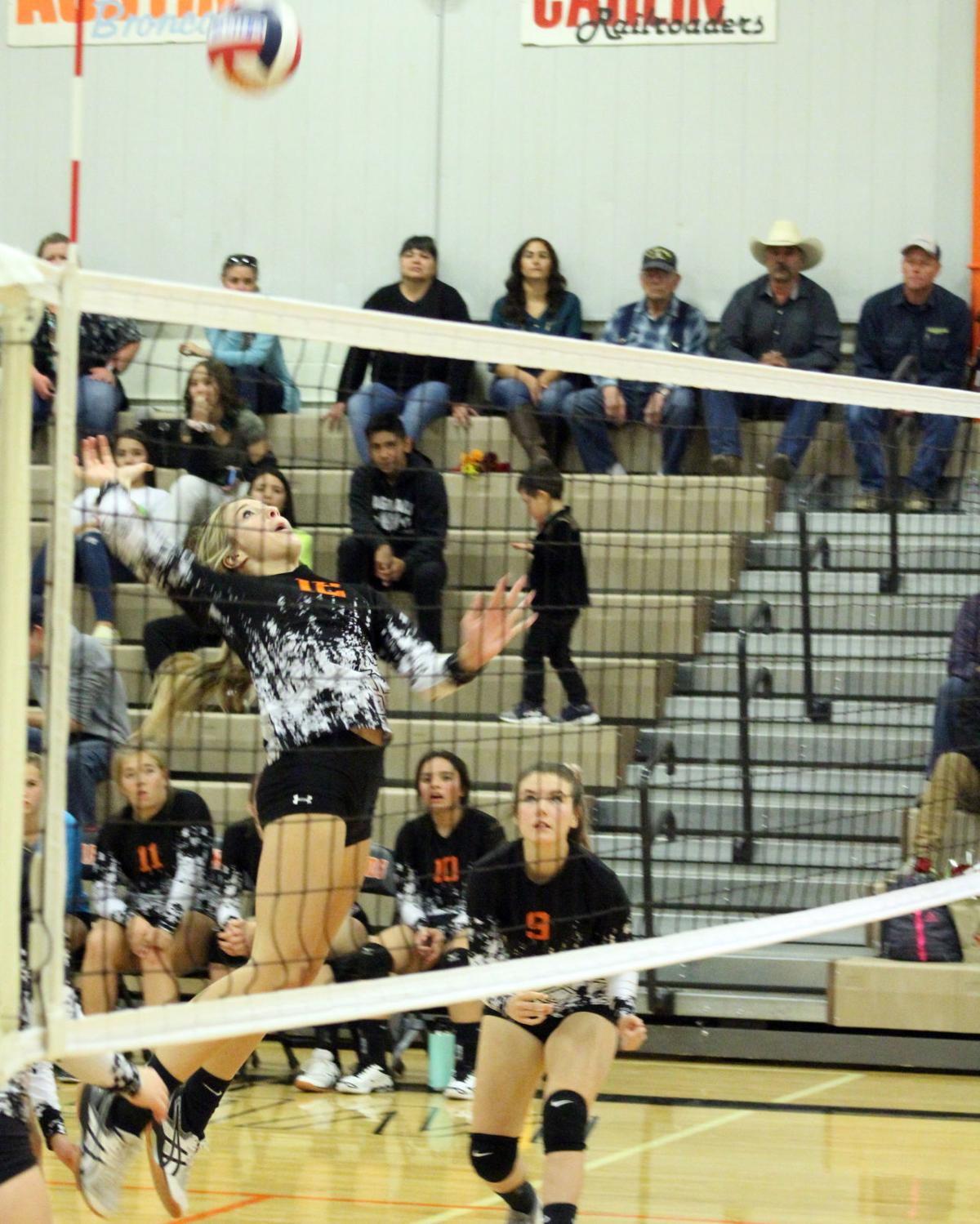 Wells' Jillian Rodriguez climbs for a shot versus Eureka on Oct. 25, 2019, in Wells. As a freshman, Rodriguez earned a 2nd-Team All-League selection of the 1A East as a middle blocker. 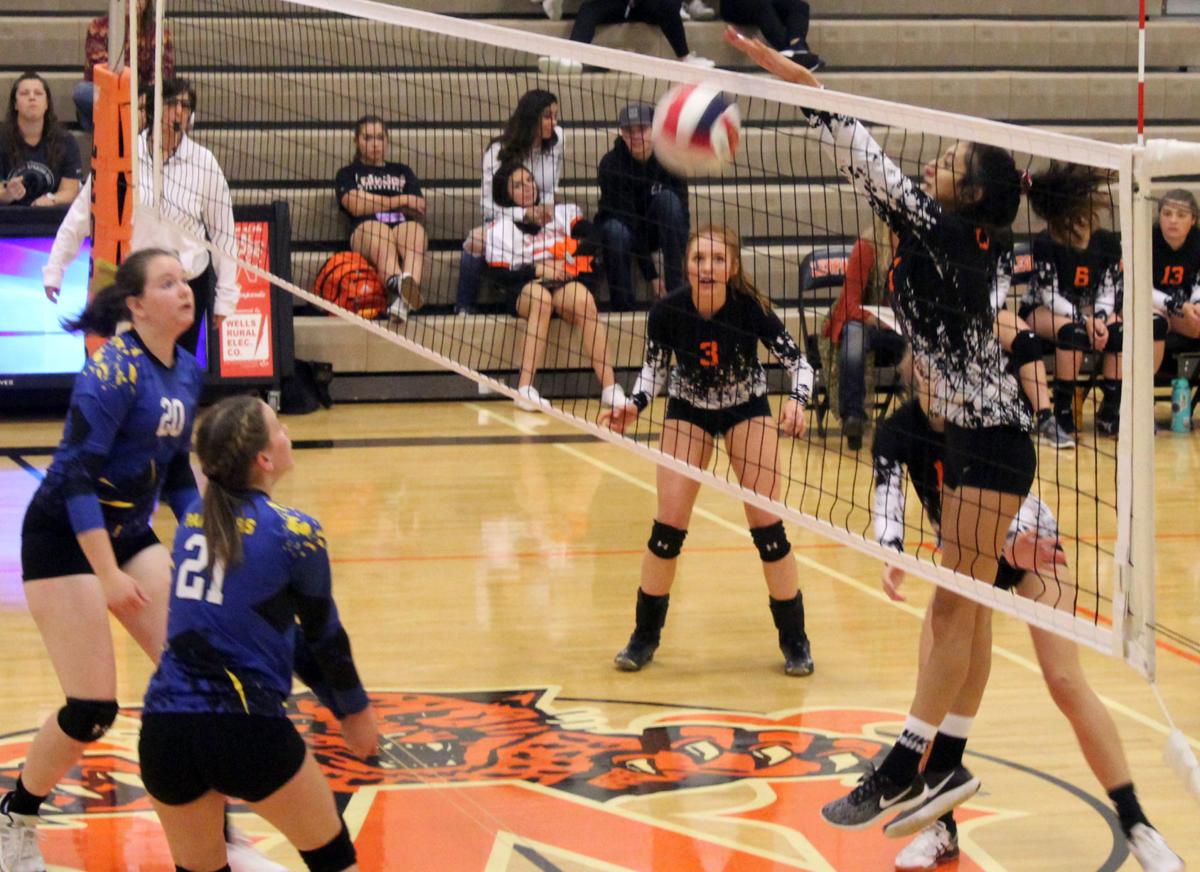 Wells' Vanessa Solis, right, puts down a ball on Sept. 19, 2019, against Pahranagat Valley, in Wells. The Lady Leopards defeated the 2018 state champion in four sets. Solis finished her career with a 2nd-Team All-League nod at outside hitter. 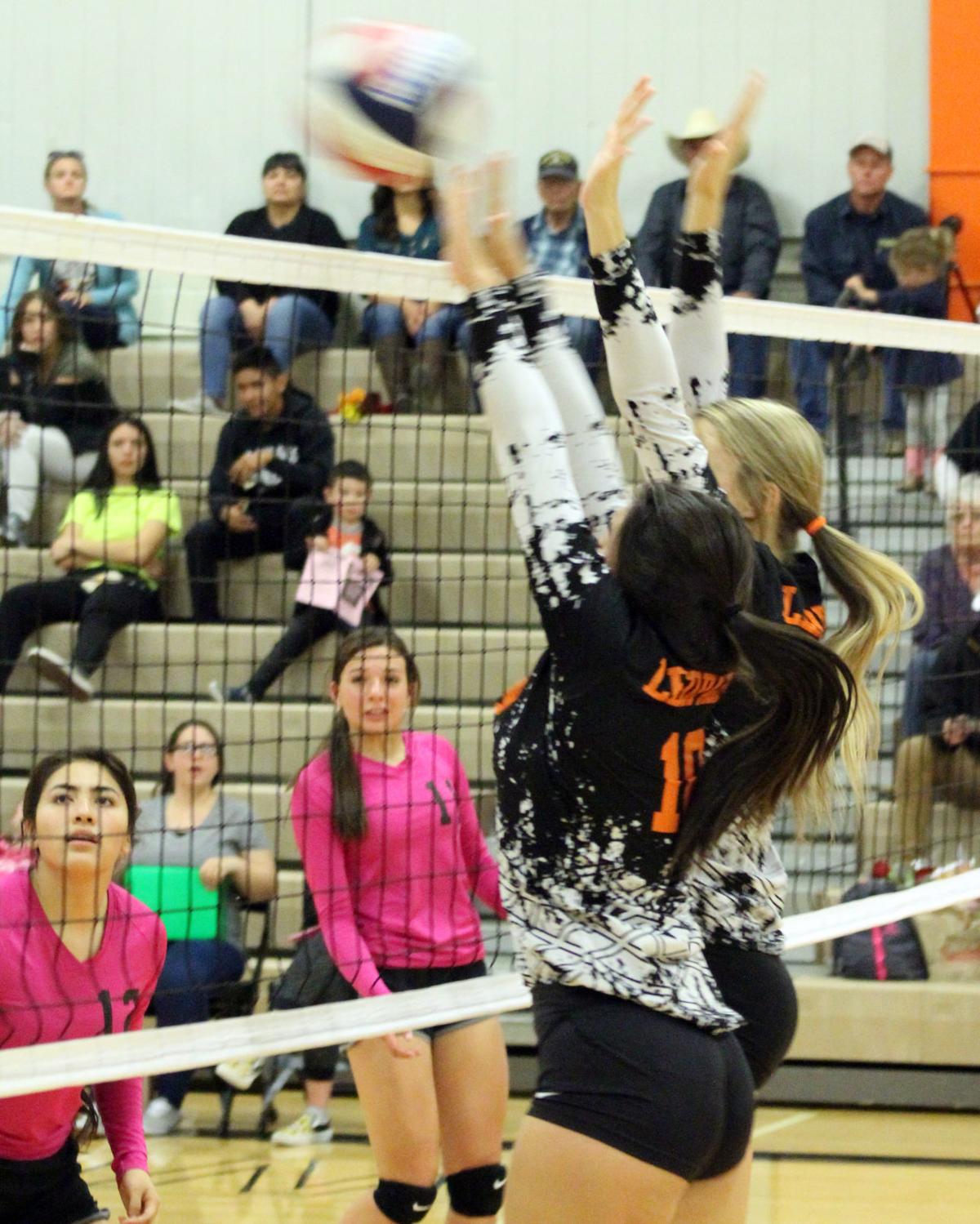 Jasmin Garcia, left, and Jillian Rodriguez combine for a block on Oct. 25, 2019, against Eureka, in Wells. Rodriguez, a freshman, was a 2nd-Team All-League middle blocker and Garcia earned an honorable mention for the league awards as a sophomore at outside hitter. 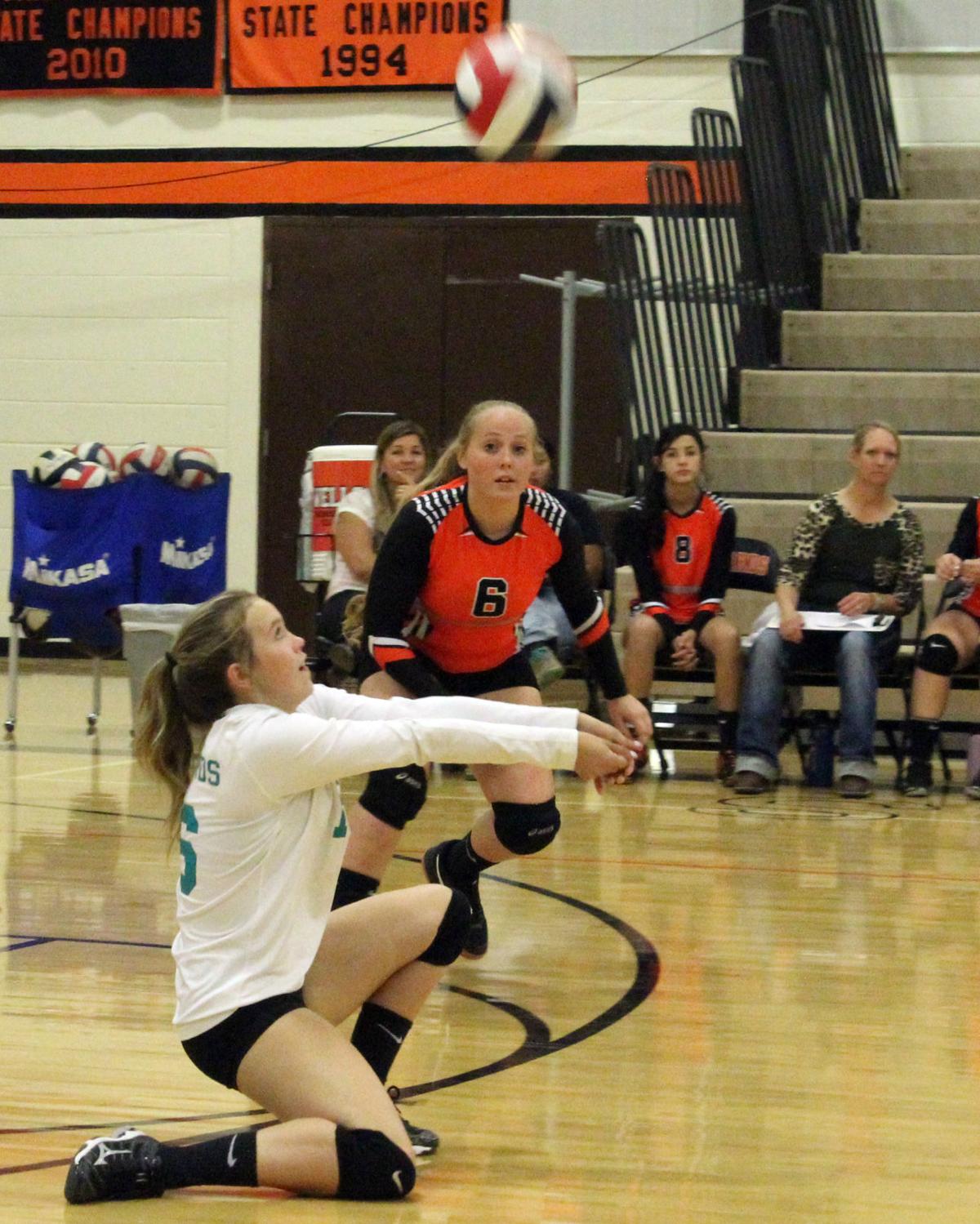 Wells' Falen Iveson digs a shot on Sept. 17, 2019, in the Lady Leopards' league contest versus Jackpot, in Wells. Iveson closed her sophomore year with an honorable mention for the 1A East awards as a libero.