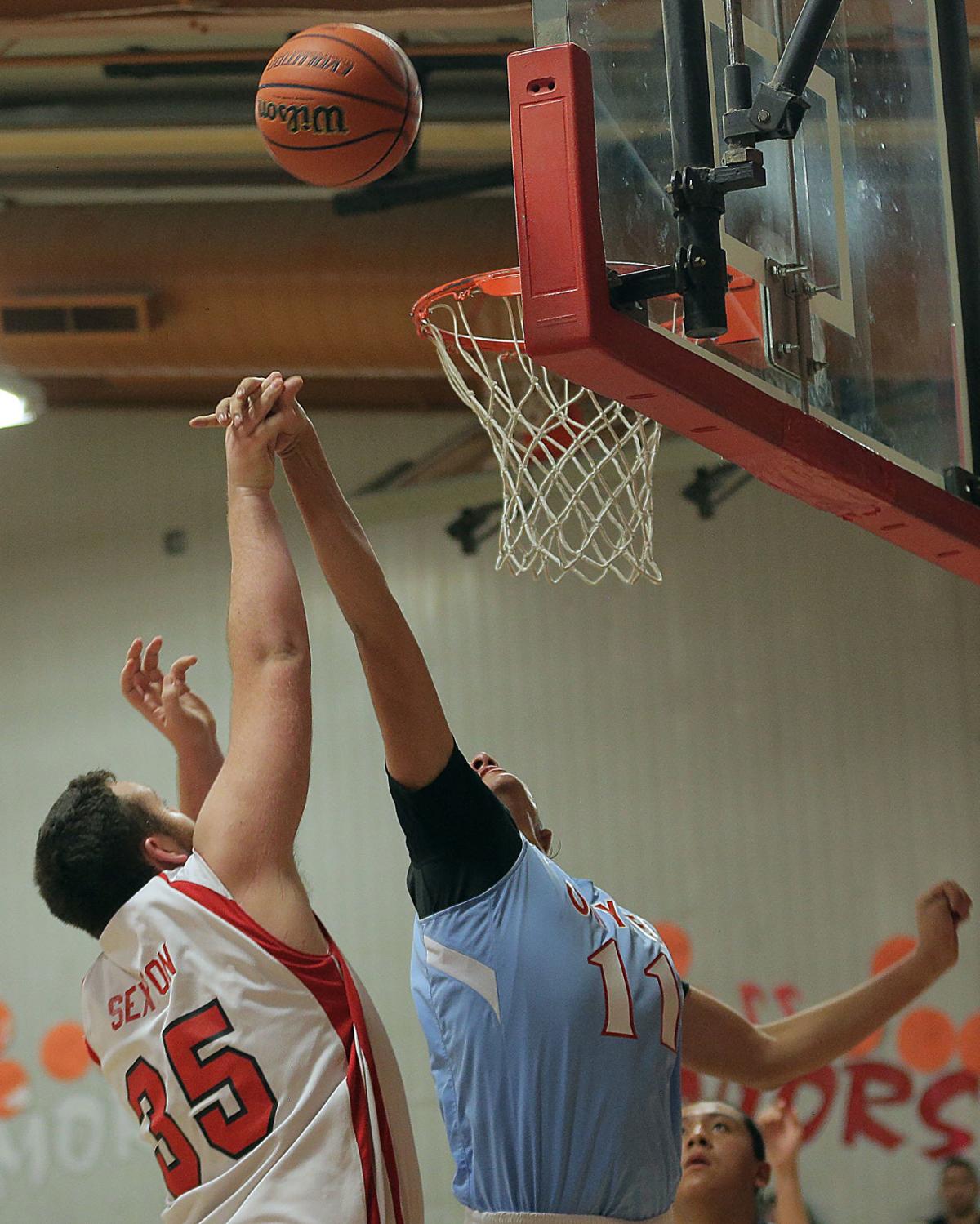 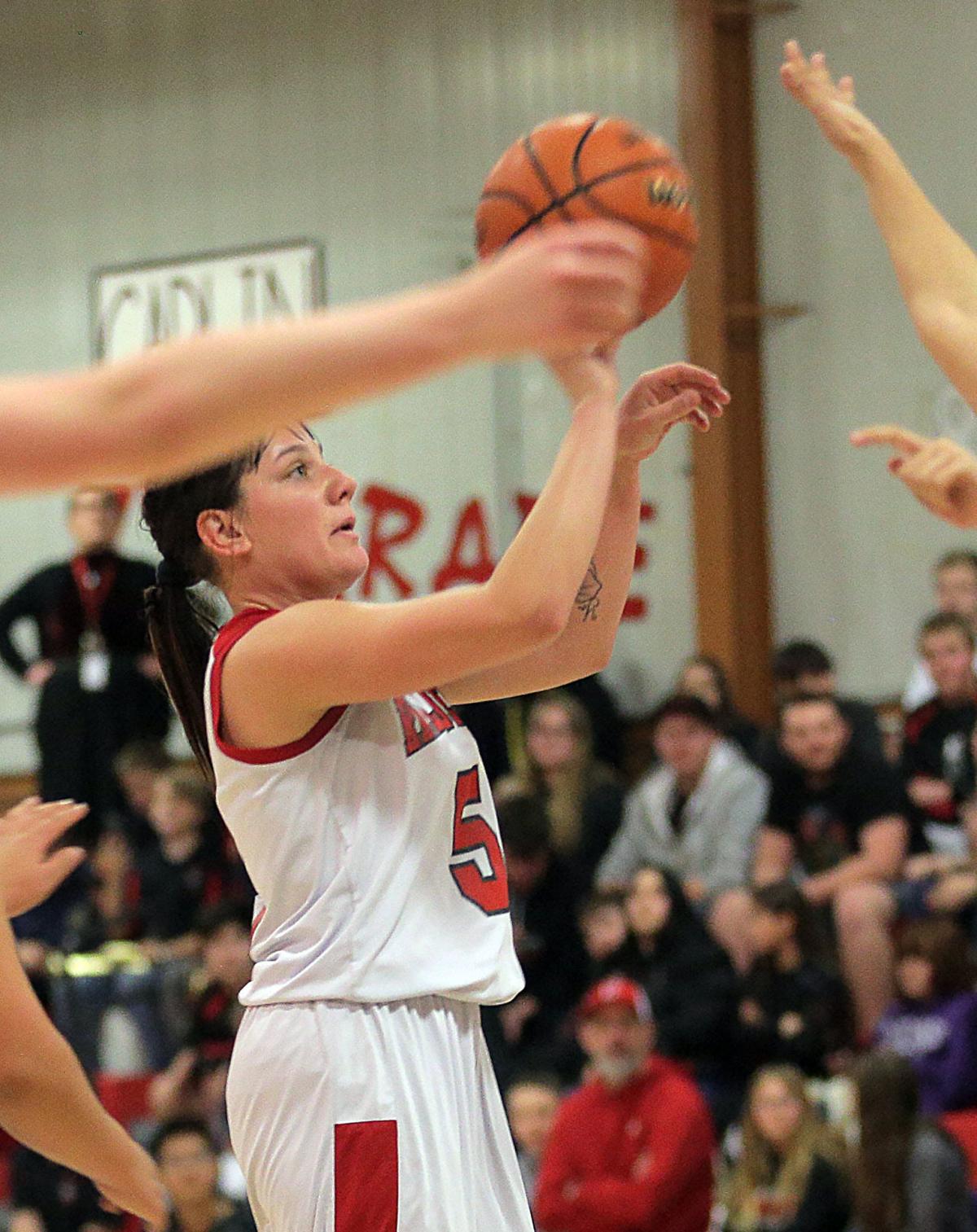 Carlin's Akilah Leach takes a shot over an outstretched Owyhee defender's hand on Jan. 9, 2020, in Carlin.

CARLIN — When the Carlin basketball teams take to the hardwood Thursday night, each will try for their first victories of the season — starting the year with matching 0-10 records.

The Railroaders — after a 74-23 home loss to Owyhee on Jan. 9 — traveled to Eureka on Jan. 10 and were handily throttled by the Vandals in a 49-point, running-clock contest.

Carlin barely reached double digits as a team in a 60-11 loss.

Sexton led Carlin with seven rebounds, while George grabbed six boards and made a steal.

On Friday, the Railroaders returned home and found the reemergence of senior John Henderson helpful.

However, Carlin dropped a 54-37 contest to visiting McDermitt.

The Bulldogs opened the game successfully with an 18-8 advantage in the first quarter, but the Railroaders cut into the gap with a 10-9 run in the second.

At halftime, McDermitt led by nine with the score at 27-18.

The third quarter was nearly a dead-even battle, the Bulldogs edging the Railroaders 12-11.

Entering the fourth, the game was still within reach for Carlin with the score at 39-29.

Sophomore Enrique Villalobos was efficient on 8-for-12 shooting and finished with 19 points, eight boards, a game-best three blocks, an assist and a takeaway.

Sexton was a beast on the backboards with a game-best 15 rebounds and scored four points, and freshman Alex Ramirez notched four points, five boards and a swipe.

Like Sexton, Doxey put in work on missed shots — finishing with 14 rebounds and two points.

Christensen capped the offense for Carlin with two points and collected four rebounds.

The offense for the Bulldogs was rounded out by a free throw from junior Steele Crossley, who impacted the game with six rebounds, an assist and a theft.

The Lady Vandals commanded the outcome from the tip, opening the game with a 19-2 lead in the first quarter.

The mercy rule took effect in the fourth — the deficit eclipsing 35 points — Eureka outscoring Carlin 9-2 and rolling to a 40-point, 58-18 win.

The Lady Vandals’ offense was capped with a free throw by freshman Kari Watson.

Behind Leach, no Carlin player scored more than two points — rounded out by a deuce each for senior Lachelle Doxey, sophomore Miranda Rainville and freshman Addison Melendez.

Rainville topped the roster with seven rebounds and made a steal, Doxey pulling down six boards.

Sophomore Garren Graves snagged a rebound and a takeaway.

After shooting 24 percent from the floor against the Lady Vandals, the Lady Railroaders struggled to put the ball in the bucket Saturday during a 61-21 home loss to McDermitt — sinking just 9-of-39 shots for a 23-percent clip from the field.

The Lady Bulldogs blanked Carlin 17-0 in the first quarter and extended to a 31-5 halftime lead with a 14-5 advantage in the second period.

Carlin’s best frame came in the third, reaching double digits for the only time of the contest but being outscored 14-10.

In the fourth, McDermitt capped a 40-point victory — running the clock — with a 16-6 streak down the stretch.

The offense was finished with two points each for Doxey, Rainville and sophomore Addie Comstock.

Doxey was active, pacing Carlin with 12 rebounds and two steals.

Aside from Leach and Graves, the rest of the roster was just 3-for-33 from the field.

The Lady Railroaders’ best chance for a victory will take place in the next contest, hosting Jackpot (1-7 overall, 0-3 in league) at 5:30 p.m. Thursday, in Carlin.

Following the girls, Carlin’s boys will face an uphill battle against the Jaguars (9-2 overall, 3-1 in league) at 7 p.m. Thursday.

The Braves ran off a first-quarter advantage of 28-4 and ripped off a 21-1 streak in the third, Owyhee blitzing the Railroaders by 51 points and dashing to a 74-23 victory.

Owyhee ran off a 30-4 halftime lead and breezed to a 47-12 victory over Carlin in the Division 1A East opener for both teams.

Railroaders fall to 0-7 in league opener at Lund

When the Carlin boys basketball team steps on the floor Thursday in its home league opener, the Railroaders will be looking for their first victory of the season. Carlin fell to 0-7 on the year and 0-1 in league play of the Division 1A East with a 67-42 road loss Tuesday, at Lund.

Entering Friday’s games against Beatty during the Kody Beach Memorial, in Round Mountain, both the Carlin boys and girls basketball teams hoped the contests would serve as their first victories of the season.

After a 74-23 victory over the Railroaders on Jan. 9, in Carlin, the Braves took out Carlin for the second time Thursday by a final score of 61-19, in Owyhee.

WELLS — The Wells girls basketball team is shaping up, showing some growth, maturity and a whole lot of try.

Carlin's Akilah Leach takes a shot over an outstretched Owyhee defender's hand on Jan. 9, 2020, in Carlin.