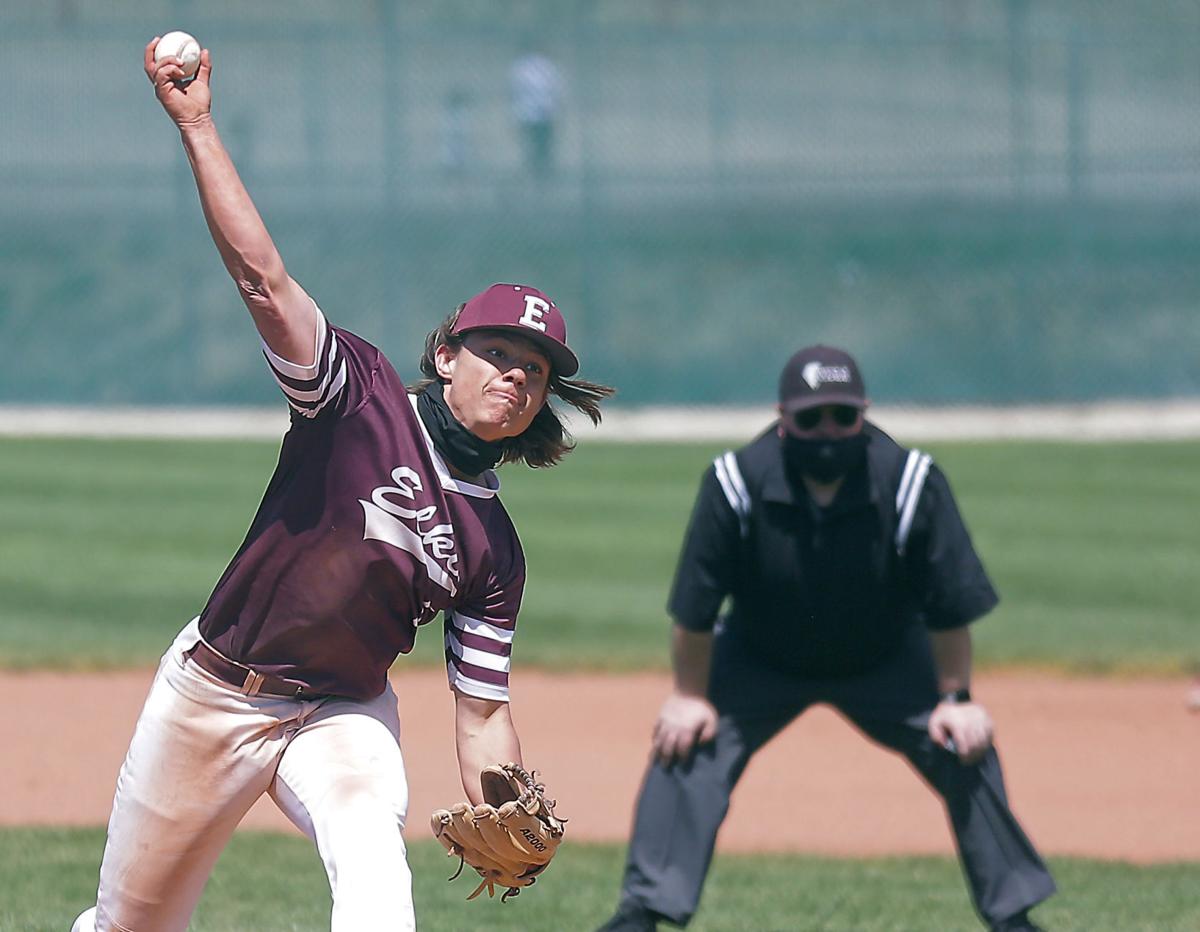 Elko's Lincoln Ratliff throws a pitch in the second game of a doubleheader against Fallon on Saturday, May 1, 2021, at Upper Kump Field. Across five innings, he allowed three runs (none earned) on five hits with nine strikeouts and no walks in a 13-3 victory. Offensively, he went 2-for-4 at the plate, scored a game-high three runs and stole a base. 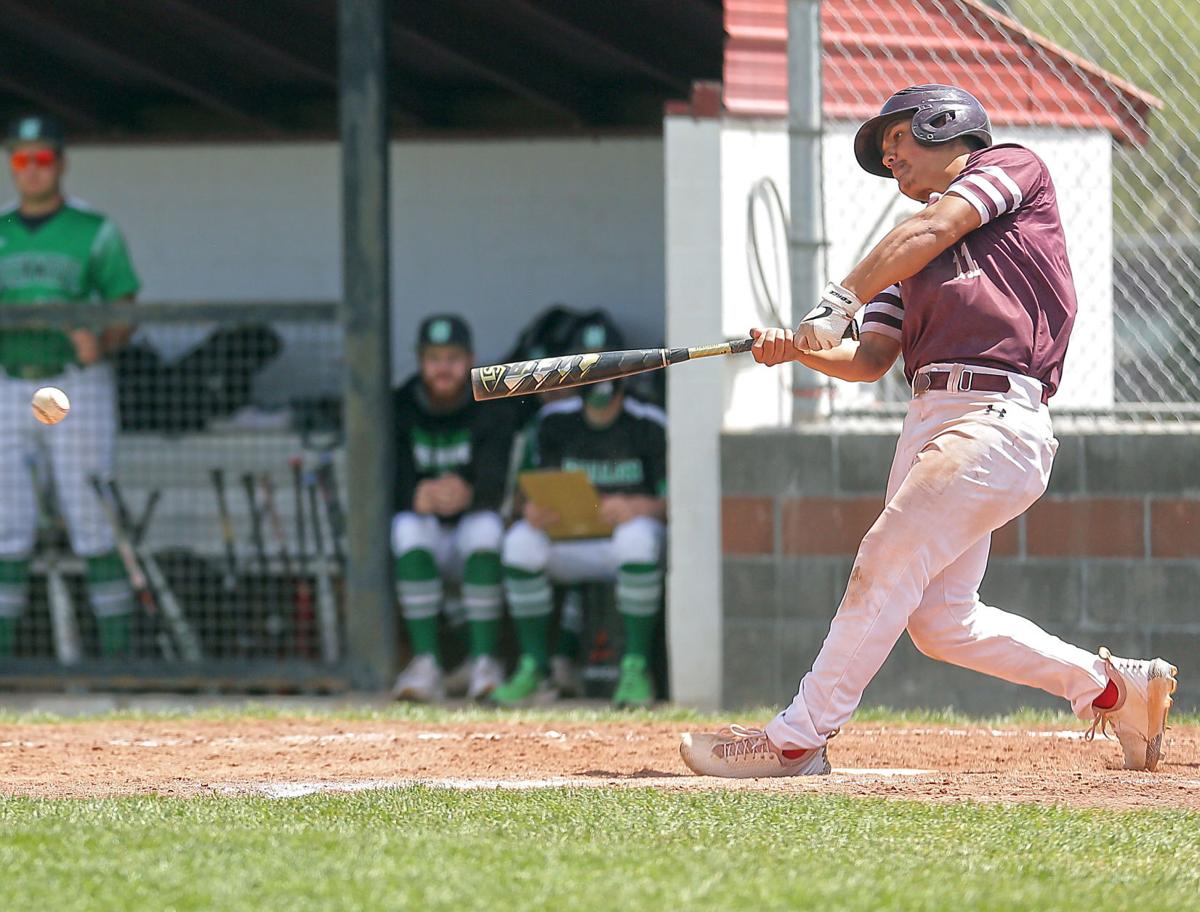 Elko's Manny Alvarado hits a line drive in the first game of a doubleheader against Fallon. Saturday, May 1, 2021, at Upper Kump Field, in a 13-9 loss. In the second contest, Alvarado walked the Indians off with an RBI single up the middle in a 13-3 win in five innings. In the finale, he hit 2-for-4 with an RBI, scored two runs and stole a base.

ELKO — The Elko baseball team salvaged a win in the finale of a three-game series with Fallon after dropping both the opener Wednesday, in Fallon, and the first game of Saturday’s doubleheader.

Game One of DH

Elko went to the front early, taking a 1-0 lead in the bottom of the first inning on a two-out double by sophomore Alex Salaz that scored senior Kaiden Cervantes.

The advantaged remained after the top of the second, the Indians retiring Fallon in order — including a strikeout by junior pitcher Nick Collie.

In the home half of the second, the Indians threatened — placing its leadoff hitters on base when senior Manny Alvarado was hit by a pitch and junior Trae Still earned a walk — but Elko was out on a sacrifice bunt and hit into an inning-ending lineout double play to second base.

The Greenwave carried the momentous defensive stand into the top of the third, turning in an offensive burst.

Junior Damien Towne drove in a run as he was hit by a pitch, and junior Tyler Austin ripped a two-out base knock up the middle — pushing Fallon to a 3-1 lead as he crossed Davis and Lee.

On the next at-bat, freshman Bryce Adams slapped a two-run groundball to left field — scoring Towne and Austin for a 5-1 cushion.

Facing a four-run deficit, Elko answered with a huge frame of its own in the home half.

Runners were placed on the corners with a fielder’s choice grounder by Cervantes, and Salaz drove in Ratliff with a single on the ground to center field.

Senior Dillon Eden brought Elko to within two, crossing Cervantes with a grounder to short.

The Indians chipped away further, an error at first base allowing Salaz to score.

After a strikeout pitch from Towne that placed two away, Elko grabbed the lead with a big two-RBI base knock by sophomore Craig Slater — driving in Eden and Alvarado.

Slater took second base on a passed ball, and sophomore Cai Alvarado drew a walk.

The Indians went through the lineup, and Ratliff tagged an RBI single through the air to left field — opening a 7-5 lead as Slater rolled home.

An error at first base gave Cai Alvarado a free stroll across the plate and capped a seven-run frame for an 8-5 advantage.

The give-and-take continued in the top of the fourth.

Alves hit a one-out single and scored on an RBI double from Davis, Lee driving in Davis with a base knock to short.

An error at second base placed runners on first and second, and Fallon tied the contest 8-8 with a base knock by Strasdin to left field — scoring Lee — and the Wave went back on top 9-8 with a grounder by Austin to third base that sent in Towne.

A fly ball to Manny Alvarado at short put two away, but the Indians could not get out of the inning.

Senior Toby Anderson drew a walk, and sophomore Steven Moon struck out but reached on a dropped-third strike — Strasdin scoring on the play.

An error at first base allowed Austin to dart home, Fallon answering back with a seven-run streak of its own for an 11-8 lead.

Junior Sterling Ferguson ended the inning with a strikeout, but the Indians needed to wake up the offense in a three-run hole.

However, Elko was retired in the home half one-two-three.

In the top of the fifth, the Wave gained an insurance run as sophomore Isaiah Diaz scored on a passed ball.

Elko gained the run back in the bottom half.

Still led off with a single to left field and advanced to third a double from junior Spenser Jones to right.

A passed ball allowed Still to score, and Cai Alvarado put runners on the corners when he drew a walk.

However, Elko stranded both runners with consecutive strikeouts by Towne.

The Indians played a one-two-three defensive frame in the top of the sixth, but the Greenwave returned the favor in the home half.

In the top of the seventh, Davis led off with a triple to right field and scored on a sacrifice fly by Lee to center — taking a 13-9 lead.

In the bottom half, Jones sent a two-out single to right field and Cai Alvarado was hit by a pitch.

But, a 6-3 groundout closed the contest — Fallon claiming the series with a 13-9 victory.

In the series finale, the Indians found their first win of the matchup with a 13-3, 10-run rule victory in five innings.

Davis led off the ballgame with a triple to right field, but the next-two batters were struck out by Ratliff — the inning ending with a 6-3 groundout from Alvarado to Still.

Ratliff led off the home half of the first and reached on an error at first base, which allowed him to take third base.

He scored on a one-out single up the middle by Cervantes.

Salaz followed with a double to center field — putting runners at second and third — and Eden scored Cervantes with a base knock to left.

Eden stole second base, and the Indians took a 3-0 lead as Salaz scored on a passed ball.

An error in center field gave the green light to both Eden and Manny Alvarado to roll home, opening a 5-0 advantage.

Elko sat Fallon down one-two-three in the top of the second, the frame bookended with punchouts by Ratliff.

Ratliff led off the bottom half with a base knock to left, runner set at first and third with a single by Collie to center — advancing to second on the throw.

Ratliff scored on a passed ball, and Collie crossed afterward for a 7-0 lead.

Cervantes — who earned a walk and took second on a passed ball — advanced to third on a groundout and was driven in by a groundout RBI by Eden for an 8-0 cushion.

Manny Alvarado followed with a two-out single to right field, stole second base and advanced to third on a passed ball — scoring on an error at short.

In the away half of the third, Ratliff rolled — striking out the side in order.

Cai Alvarado reached on a leadoff error at first base, Ratliff following with a single to third base.

Following consecutive outs on a fly ball and a fielder’s choice, Cai Alvarado scored on a double by Salaz to center field for a 10-0 lead.

Strasdin reached base with a two-out error at second base in the top of the fourth, and Austin singled to center field.

The threat ended with Ratliff’s second K of the inning.

Manny Alvarado was hit by a pitch in the leadoff spot in the home half, and junior Blaze Jones added a single up the middle.

However, a fly out to right field was followed by a pickoff at first base and a strikeout by Moon.

The Greenwave found their first and only offensive successes in the top of the fifth.

An error at short allowed Moon to reach with one away, but a fly out to third placed Fallon against its final out.

Davis extended the contest with a single to left field, and Moon scored on an RBI base knock from Lee to center.

Towne ripped a two-run double up the middle — crossing Davis and Lee — bringing Fallon to within seven at 10-3.

Ratliff reached in the leadoff spot in the home half of the fifth with an error at second base and stole second base, Collie drawing a full-count walk.

Following a fly out and a strikeout, Eden smoked a two-out RBI single to center field — scoring Ratliff.

Collie scored on a passed ball, and Manny Alvarado ended the game early — lining a base knock up the gut and driving in Eden for a 13-3 walk-off victory in five innings.

The Indians (6-3 in league) will resume 3A North action against the Dust Devils (7-2 in league) at 3 p.m. Wednesday, in Dayton.

Playing a doubleheader Wednesday, in Fallon — only one of the games counting toward the league standings — the Elko baseball team dropped the game matted that mattered and followed with a win in a non-league contest.

On Saturday, the Elko baseball team split its doubleheader with Lowry — opening the day with a blowout victory of 14-3 in five innings but following with its first loss of the season by a final score of 9-7 with a couple Lowry runs in the bottom of the sixth.

The game definitely wasn’t always pretty, but the end result was ideal — a victory.

The Indians plated six runs in the bottom of the sixth during the first game of the doubleheader — turning a 5-4 deficit into a 10-5 victory — and carried the momentum into the second half of the double dip, rolling to a 11-1 win for the series sweep.

SPRING CREEK — Like the Elko softball team, the Indians’ baseball team took care of business in its season opener.

The Elko baseball team returns a number of key contributors for the upcoming, delayed, shortened season.

Elko's Lincoln Ratliff throws a pitch in the second game of a doubleheader against Fallon on Saturday, May 1, 2021, at Upper Kump Field. Across five innings, he allowed three runs (none earned) on five hits with nine strikeouts and no walks in a 13-3 victory. Offensively, he went 2-for-4 at the plate, scored a game-high three runs and stole a base.

Elko's Manny Alvarado hits a line drive in the first game of a doubleheader against Fallon. Saturday, May 1, 2021, at Upper Kump Field, in a 13-9 loss. In the second contest, Alvarado walked the Indians off with an RBI single up the middle in a 13-3 win in five innings. In the finale, he hit 2-for-4 with an RBI, scored two runs and stole a base.